For the sake of the struggle with Putin, it is not a pity to destroy the country: IV Forum of Free Russia in Lithuania

December 5 2017
73
In Vilnius, another Forum of free Russia has started - a gathering of Russian oppositionists, political emigrants and Western Russophobes. The current event fully complies with the canon of the Free Russia Forums that was developed over the years they were held in Lithuania: calls for sanctions, lustration, the isolation of the Kremlin in the international arena and the overthrow of the “bloody regime” by destroying Russia. And all this is seasoned with copious profanity by the patriarch of the Lithuanian statehood, Vytautas Landsbergis.


In general, the Forum of Free Russia in Lithuania is a rather dull event. From the speeches and discussions in its sections there are analogies with the meeting of the Union of the sword and she yelled at the apartment of the sultry woman Madame Gritsatsuyeva. "Foreigners will help us." "The spirit of Alexander the Third, answer us, how long will the Bolsheviks last?"

Watch the online broadcast of the Free Russia Forums for the first time is fun, but with each subsequent time it becomes more and more boring. One and the same: the West, strengthen the sanctions, the FSB is blowing up Russia, everywhere "the hand of the Kremlin." From the Forum to the Forum, these eternal phrases merge into one drawn out whine, which sounds like an old dull barrel organ, and listening to such dissident nagging becomes unbearable even to the supporters of “free Russia” themselves.

But even at Vilnius gatherings, there are glimpses of revival in the midst of the common sad Khmary. Fun notes in the minor melody of the Free Russia Forums are usually brought in by their main stars: the first head of post-Soviet Lithuania, Vytautas Landsbergis, the chess player Garry Kasparov and the “socialite” Bozena Rynska.

This time only Landsbergis and Kasparov were among the three regulars. The organizers did not call Bozhena, apparently hoping to rid the event of the scandalous darling, to make it more respectable and solid. It’s all in vain: without a reasoning about the DNA of Caucasians and “pressing” the journalists' phones of Bozhena, the event only became more boring, and the scandalous taint was still provided to him by the “father of Lithuanian democracy” Landsbergis. 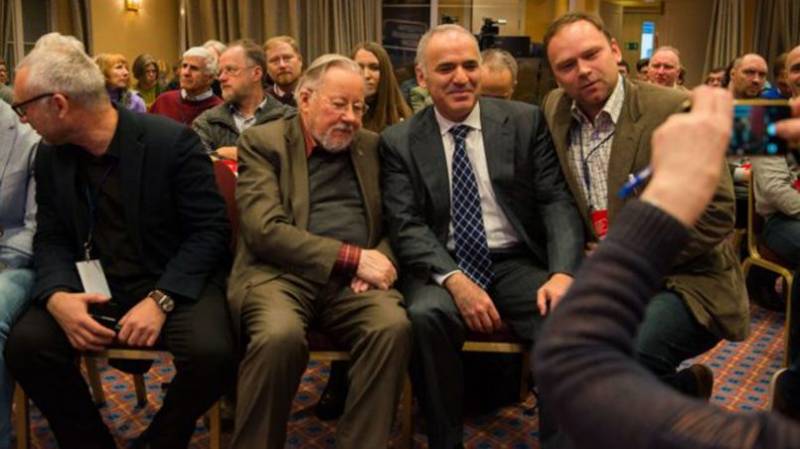 This time only Vytautas Landsbergis and Garry Kasparov were among the three regulars / Photo: forumfreerussia.org

It was worth giving the 85 ‑ year-old “father of the nation” a microphone, as the dedule began to talk about his favorite topic - about the city ... but.

“If we take a kilogram of oil and mix it with a kilogram of g ... on, then will we get a new type of oil,” Vytautas Landsbergis asked the audience a philosophical question, “or will we get a new g ... but?” What was the meaning of such a strong metaphor? she informs the spiritual leader of the Lithuanian conservatives, it remains only to guess.

The poetic allegory from the professor of the Vilnius Philharmonic Society was presented in the section “The Kremlin propaganda machine: how to resist it”, during which the topics “Propaganda weapon “Hybrid warfare”, “Alternative channels of communication in the conditions of informational monopoly”, “Whether the refrigerator will win the battle with the TV”. Apparently, one of these topics brought Landsbergis to think about oil and g ... but. 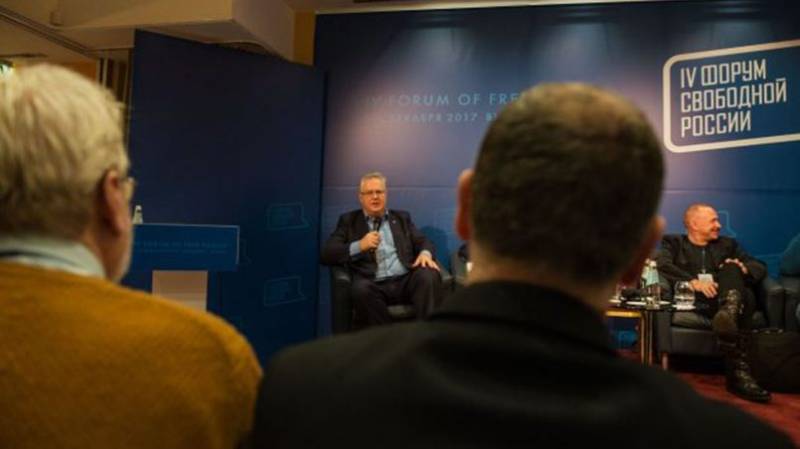 Dedule with his foul language has already become part of the canon of Vilnius meetings for Russian dissidents, where, among other things, there are traditionally calls for tougher sanctions and the introduction of “black lists”, stories about the “bloody gebna” and the collective dreams of the participants about how Putin’s regime will collapse under external pressure of the “free world”, with a latent insult to the West due to its unwillingness to give “the best people of Russia” due attention and care.

The Free Russia Forum took place as a bunch of losers who complain about others and convince themselves that they are so bad because they are so good.

Complaints and reproaches do not sound about the Kremlin: everything is clear with him for a long time. Ordinary Russians are to blame for not allowing the “truth” to be established on social networks. Ten years ago, in the political segment of the Runet, there was only a liberal-minded educated part of Russian society, and now housewives, taxi drivers, and plumbers have come to it, which have made the Internet another Putin’s information tool, participants in the Free Russia Forum tinged with social racism. 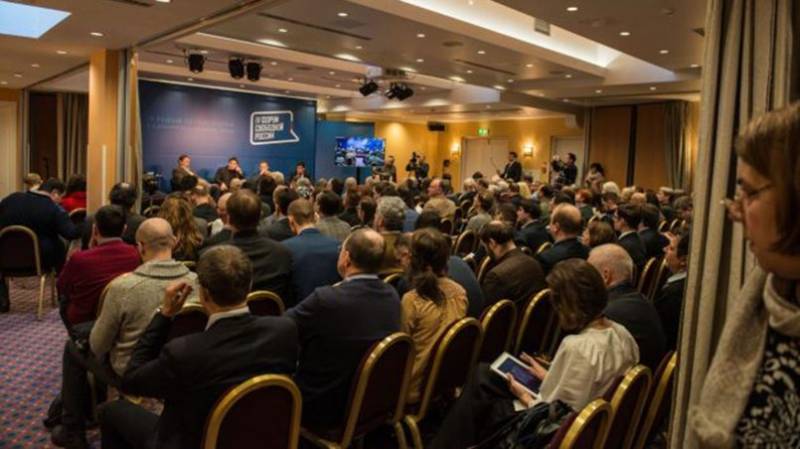 The Russian oppositionists themselves are to blame. Only not those who sit in Vilnius, but those who are with them in "counter". They all sold out to the “office” and from the Soviet times work for the Lubyanka, the guests of the Forum say, starting with this voluptuously to figure out which of their intraspecific competitors cooperate with the FSB and the Kremlin, and incidentally complaining that many consider them paranoid.

The Western world is very, very much to blame for the Russian “people of good will”. For not really wanting to fight with Russia. For not refusing dialogue with the Kremlin. For the fact that his sanctions are formalist, weak and inconsistent. For not listening to the opinion of "the best people of Russia" when they advise him on how to behave with Putin.

The West does not understand all the subtleties and nuances of the struggle against "Putinism." It requires proof that the FSB agents arrange all the terrorist acts of Islamic fanatics, and the argument “yes, this is understandable to everyone” does not accept as evidence. He is shocked by the demands to take and ban Russian media: what about freedom of speech and the competition of opinions - the foundations of the foundations of democracy?

The Russian “demshiza” and its hospitable Lithuanian owners, although they call themselves real Europeans and advocate saving Europe from the “new Mordor”, argue that the people of European culture cannot understand their logic.

For example, how can it be argued that the Kremlin has propaganda, and we have journalism, and right there declare that we oppose the Kremlin propaganda with ours — honest, kind, light propaganda?

For the comfortable existence of “free Russians” in their narrow circle, they cannot be contradicted. One cannot find discrepancies in their reasoning, one cannot criticize them for their irrationality. This equally applies to hospitable Lithuanian hosts.

Thus, an obscure Russian political émigré residing in Riga was pierced by deciding to speak on one of the unchanging topics of the Free Russia Forum - the topic of lustration of “crooks and thieves”. He wondered why the Baltic states were the examples of effective lustration of Russia, which subjected the people from the Communist Party to lustration, while the Lithuanian president was a woman who had a career in the CPSU for eight years before the collapse of the Soviet Union?

The question was simply ignored: the speakers did not respond to it, the moderators pretended that they did not notice the question, and offered to ask the following.

A young man from Riga is simply inexperienced: he has not yet understood that in order to make a career as a “fighter with the regime,” he has to say something that will appeal to those who pay for a hotel and a buffet table. He would learn from his older comrades. At least the recognized veteran of the fight against the "bloody gebney" Garry Kasparov. 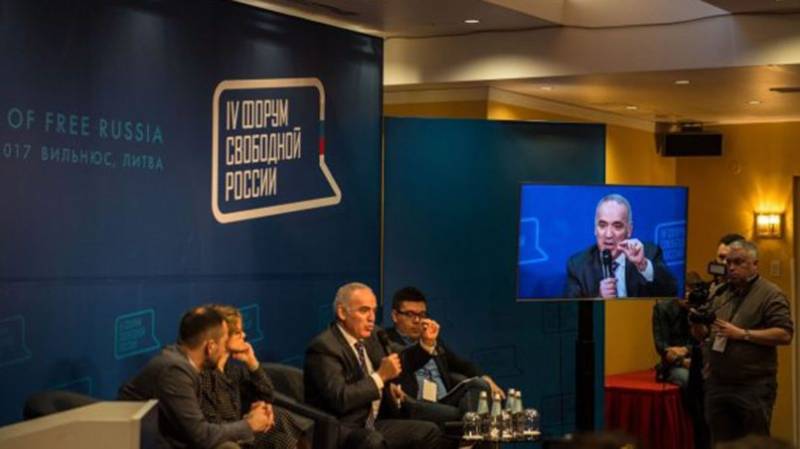 The latter directly stated to the Forum participants that for the sake of the “free world” Russia can be sacrificed and in order to change the Putin regime we should not be afraid of the collapse of the country.

Kasparov stressed that both times: in 1917 and 1991, the destruction of the authoritarian political regime in Russia was accompanied by the destruction of the entire country. Therefore, democratically minded Russians, who are eager to rid Russia of Putin, should be prepared for the destruction of the country for the third time. If they are truly honest, conscientious, bright people who cherish the freedom and security of Russia's neighbors, then we must be ready to sacrifice our country.

Lithuanian politicians in the hall listened to Kasparov's speech and melted with emotion. They heard what they wanted to hear. For this were all the organizational efforts, the hotel and the buffet. For the sake of these words, the Free Russia Forum was started.
4-th Forum of free Russia. First day. Sammari

Ctrl Enter
Noticed oshЫbku Highlight text and press. Ctrl + Enter
We are
"Occupation" with a gainOn the other side of the “red” and “white”. Izborsk Club Report
Military Reviewin Yandex News
Military Reviewin Google News
73 comments
Information
Dear reader, to leave comments on the publication, you must to register.