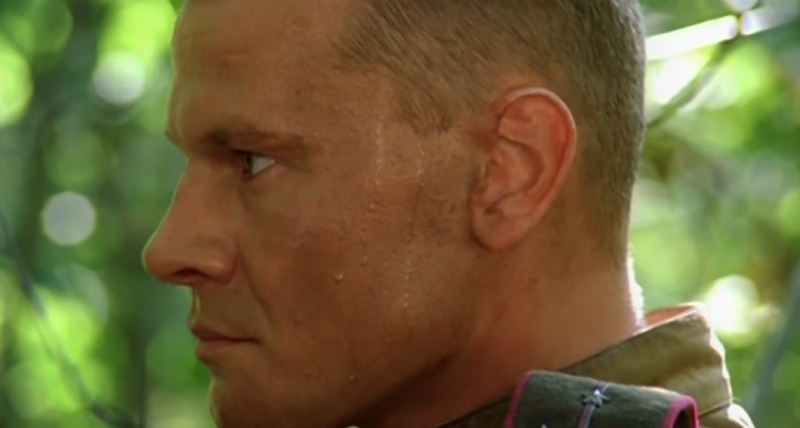 To make it difficult for him to aim, I continuously “rocked the pendulum”: I was dancing to the left
shoulder forward, jerking, moving the body from side to side and all the time moving on its own, something similar, only simpler, the boxer does in the ring.
(c) V.O. Bogomolov. "In August 44"

The opinion of the sambist will be like that. What is demonstrated in the movement of an arrow of practical shooting is at odds from the point of view of use in a real combat situation.

Combat training has existed since human beings began to gather in organized, guided groups with the goal of obtaining food, robbing less organized or weaker relatives, or vice versa, protecting them from stronger ones. With the development of scientific and technological progress and the emergence of new tools, combat training began to be divided into disciplines, so there were wrestling and boxing, fencing, horse control or a tank.

Over time, regular classes and practicing techniques were separated into a separate system, which was called the sport. Unlike combat, it has completely different goals - physical education, health, entertainment, the pursuit of excellence, business. Accordingly, other external and internal relations and relationships. Since sport came out of utilitarian practice and turned into an object of mass culture, it lost some of its applied qualities and acquired other, giving entertainment and aesthetics.
For example, fights in martial arts break and conduct training and competitions in weight categories of athletes. Needless to say, in life you don’t have to choose the weight category of the opponent who attacked you. A similar example can be given from any sport. For example, the Weaver stance from the rifle training is needed as a kiba dacha karate stance in a street fight. Therefore, it is possible to take from an athletic training only elements of an applied purpose and supplement them with that specificity that is not in sports, but can occur in life.

Returning to the main topic - the movement during the shooting. In the epigraph I gave a literary description of the “pendulum” from the work of V. Bogomolov. Pay attention to the clarification - “something similar, only simpler, is made by a boxer in the ring.” Recall the famous expression of Mohammed Ali - "to flutter like a butterfly, sting like a bee." The pendulum is the ability of a fighter to move in space during a fight, and not the ability to hit a target from weapons. First of all, it is developed in mobile sports, where it is necessary to maintain balance in unexpected situations - in boxing, wrestling and even in football. If you start practicing the skills of the "pendulum" immediately with a gun in the firing position, then nothing happens.

If you start moving from a static stance, in response to an external threat, you will need a loss of energy to disperse, overcome the inertia of the body, lose time. In the state of the pendulum, a reflex is produced - the body's reaction to the external environment, which may not be a threat, but the signal to change the rack is already gone. An experienced goalkeeper on the swing of the opponent's stick can determine to which corner of the goal the puck will fly, and only the more experienced will determine what will now be the swing and will start moving to the right direction. Fighting and boxing is a rivalry between two complexes of reflexes. The brain does not have time to handle the changing situation, but on a barely noticeable backswing or even on the voltage of a certain group of muscles of an opponent, the body of a trained athlete is already beginning his counterplay on avoiding a blow or reception, and in the highest masters of a counterstrike or reception. The development of such tactics superbly staged in Sambo, wrestling and boxing. Quite similarly, the body of a trained fighter should work with fire contact using cold weapons or firearms. The hero of the novel Bogomolov Tamantsov perfectly knows this art. At the expense of the pendulum, he avoids shots from a pistol, reflexively determining the moment and direction of the shot.

The browning trunk followed my movements again - from right to left and
back and I felt I knew that in the next second it would come again
shot.

In addition to perfect physical training in the pendulum, an important role is played by the analytical component. An experienced fighter or athlete is constantly in creative search. Mentally, he works out various techniques that may occur in a given situation. For example, moving along the street, he evaluates the men he meets and, possibly, women, for an unexpected attack from their side and a choice of countermeasures from his own. Here you need to properly assess the weight, build, support leg, he is left-handed or right-handed, and even a mental portrait of a possible opponent.

Evasion from danger, a mortal blow, a throw, and a throw can also be fatal, a shot from a weapon, a shot or cut with a knife - this is all an apotheosis of the fight, which can be preceded by a variety of situations.
It should be clearly understood that the basis of combat training is the pendulum - reflex possession of the body in various life situations, the final of which should be the physical neutralization of the enemy, including the physical destruction of any weapon from a fist or bullet to a porcelain plate (according to Pikul), and not just the ability to shoot at Macedonian .

As already mentioned, in practical shooting the target does not shoot an athlete. He is fully focused on speeding targets. And what is primary in the fire contact, which is worked out in combat training? This is a departure from the oncoming fire line. It is necessary to determine the danger, its appearance and direction, to perform a deviating maneuver while simultaneously exposing a weapon and striking the enemy. Execution of an avoidance or blocking maneuver is one of the main conditions in combat training, but this reduces the rate of fire, which is central to shooting sports, that is, we have a systemic contradiction.


Let's look at what causes the cognitive dissonance of a sambist when he sees the movement of practicing athletes during shooting. First, some wrestling physics - the body falls if the projection of the center of gravity extends beyond the support area of ​​the body. The task of an athlete is to maintain the optimal combination of a larger footprint with minimum energy expenditure with maximum mobility. “Don't cross your legs!” Was the first advice I received. when he first entered the carpet and the last one who gave himself leaving the carpet after twenty years, dropping an opponent with a weight of 140 kg with his own 72. All movements in the pendulum only step pitch! At competitions in practical shooting, one can often observe the following picture: 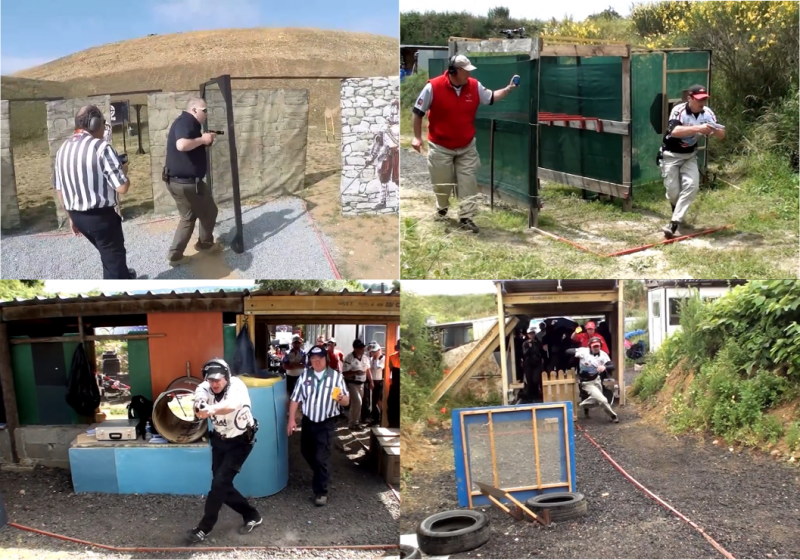 On smooth sports fields, it can and does help to conduct targeted high-speed fire at targets without worrying about what is under your feet. But life slips there knots and pebbles at the wrong time, this is its specificity. Even a child can drop an opponent with crossed legs. A sambist will not suffer, as insurance in the fall is the first thing he studies on the carpet, but an inexperienced athlete can break his neck, since both hands are holding the gun and IPSC does not explain how to act in this case.

Let me give you another example. Going to the ground floor, or taking a position for shooting prone. Two approaches are recommended - kneeling or resting on a free hand, followed by tossing the loin with straightening the legs. 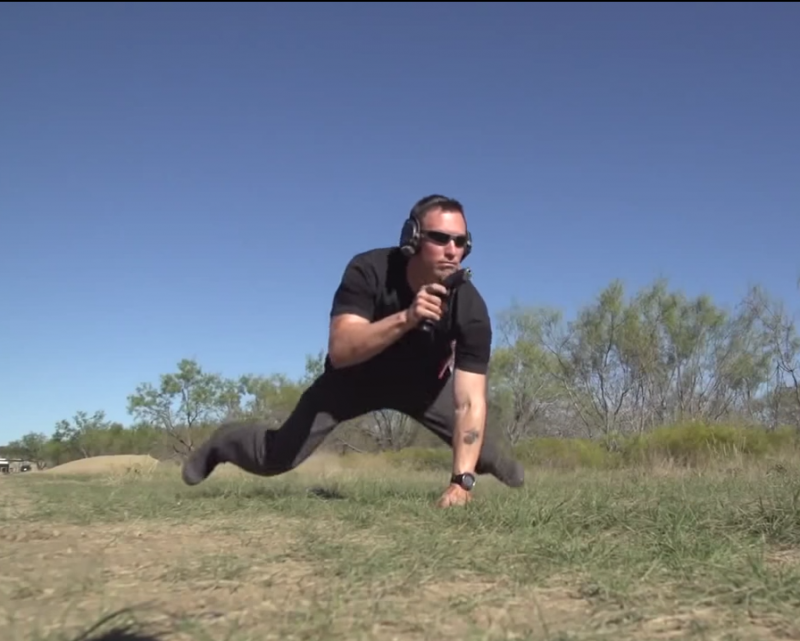 Now compare it with the Soviet approach. The fighter takes a prone position, taking a step forward and slightly to the side. Such a movement is energetically less expensive than throwing the body into the air, and shifting the body to the side reduces the likelihood of the enemy hitting, that is, an evasive maneuver is performed at the same time.

Let's remember reflexes. Suppose a fighter is threatened from the side to the left. Turning to the ground with a step forward to the side with his right foot (or retreating back with his left), he has the opportunity to turn to the side of the threat. The task in combat training is to develop a reflex skill of lowering to the ground with a step of the foot opposite to the threat with simultaneous dovorotom corps in her direction.

Of course, crossing the legs or moving to the ground floor is not limited. Errors from the point of view of the pendulum are made by the practice arrows during direct movements, turns, turns, and change of stores. The location of the holster and manipulation of the weapon when removing from it, and even the simple holding of the weapon is not always optimal for a combat maneuverable duel. There are questions about weapons and targets. For example, a swinging target is easy to read in the phase of maximum deviation, when its speed is minimal, but I did not see something suddenly appearing on targets.

The systematic nature of combat training lies in the fact that the disciplines studied must complement each other. Contradictions here are unacceptable, because their result will be the loss of the most valuable that a person has.

Ctrl Enter
Noticed oshЫbku Highlight text and press. Ctrl + Enter
We are
Cold weapons: plastic knivesWhat should be a modern sniper (part of 1)
48 comments
Information
Dear reader, to leave comments on the publication, you must to register.