Who wants to join NATO - run a march to the urns!

December 5 2017
14
When you really want, but do not take, then it's time to hold a referendum. This is exactly what they considered in Kiev after Ukraine frankly kicked off at the Eastern Partnership summit, refused to issue the 3 credit tranche in the amount of 0,6 billion, and explained that Ukraine is still very far from NATO standards.


1 December, the President of Ukraine, realizing that his rating again beat the anti-record - dropping already below 10,5% - decided to somehow raise the rating. As a jack in the absence of intelligible economic and political success - two "breakthrough" solutions. The first is to make a Catholic Christmas for a country with a predominant Orthodox population a day off. The second is to declare that the issue of Ukraine’s entry into the North Atlantic military bloc and the European Union is soon to be put to a referendum.

Officials in the European Union Poroshenko’s referendum initiative was simply ignored. They have enough problems, they say, Ms. Mae, rushing around with her Brexit, or Puchdemon with Catalonia, now Corsican nationalists, sending a letter to Paris proposing to discuss the island’s independence. And then there's Poroshenko, who, you know, is not content with the fact that for him the EU has already presented a gift in the form of a so-called bezviz. By the way, about the visa-free regime of Ukraine with Europe.

According to the latest Ukrainian sociological monitoring services, after the abolition of the visa regime between the EU and Ukraine, migration flows have changed by only 3,5%. It only says one thing: if one of the Ukrainian citizens wanted to visit the EU countries, then he did it without much difficulty before the introduction of a visa-free visa. And who has “a lot of pennies”, so at least some kind of border regime should be introduced - not much will change. Against this background, in Ukraine they started talking about the fact that the EU can cancel (suspend) “visa-free” at any time because Kiev effectively disrupted the introduction of electronic declaration. It was under the introduction of e-declaration to increase transparency and counter corruption European Union in advance and signed a paper on the abolition of the visa regime, saying that by the end of the year he would ask from the Ukrainian authorities for the implementation of the program. It just so happened, there is nothing to ask for, since, in fact, there is no e-declaration system.

The Ukrainian television channel 24TV cites a statement by the expert of the Anti-Corruption Center Anastasia Krasnoselskaya:
What we have reported to the EU for visa-free regime will fail. And it will be a big and scandalous enough step to give the EU an opportunity to talk about sanctions against Ukraine, about the possible threat of a suspension of the visa-free regime.

In the comments to the broadcast, most viewers unexpectedly spoke in favor of the fact that they were only for the suspension or abolition of the visa-free regime. The argument is approximately as follows: there was nothing to travel to Europe for, but for work, who needed it, and with visas could get to Europe.

In general, Peter A. wanted to raise the electoral rating, but something went wrong. It turned out that the only high-ranking Western official who decided to comment on the Poroshenkov referendum initiative was NATO Secretary General Jens Stoltenberg. True, the comment came out somewhat streamlined - they say, your business is: if you want to, you submit the question of membership to the referendum, if you don’t, you don’t.

Stoltenberg statement:
It is for Ukraine to decide whether it wants to become a country that aspires to NATO, or to apply for membership in NATO. And, of course, it is Ukraine who must decide whether to do this through a referendum. This is a national Ukrainian solution.

And this statement by the president of Ukraine himself, which his press secretary, Svyatoslav Tsegolko, cites:
Do not even doubt that in the foreseeable future Ukraine will hold referendums on joining NATO and on membership in the European Union. And the voting results will be as convincingly positive as already recorded in the annals stories referendum on independence.

And here you can hardly do without this "Napoleon" photo: 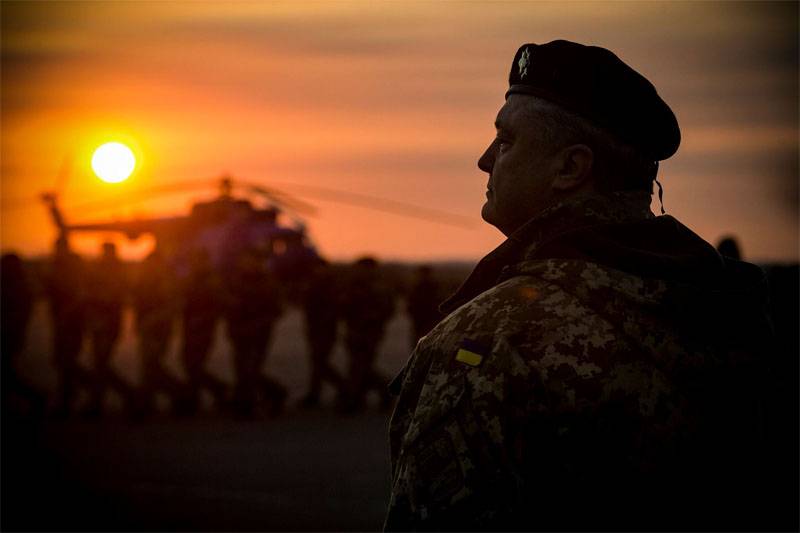 Surprisingly, the president of today's Ukraine refers to the referendum from 1 December 1991 “inscribed in the annals” ... And if Peter Alekseevich forgot, he should be reminded that the referendum was held before the Belovezhskaya meeting of the three “leaders” - that is, during existence of the Union of Soviet Socialist Republics. Thus, Mr. Poroshenko is “legitimizing”, on his part, the Crimean referendum, which took place in March 2014. After all, if Ukraine, according to Poroshenko, had the right to a referendum on independence, being a part of the USSR, then what is the Crimea “worse”? Similarly, it’s not worse — they have held their own referendum on secession from Ukraine.

In general, this statement Poroshenko with his "annals" can now be accurately referred to whenever someone in Ukraine once again tries to declare that the referendum in the Crimea and Sevastopol "did not have legitimacy."

What about a potential referendum on joining NATO? If we believe the services of the Ukrainian social monitoring, then 48% of citizens are in favor of joining the North Atlantic military bloc. Separate, especially “hot”, Ukrainian sources assert that for the entry of NATO already almost 60% of citizens are “Square”. Yes, let 60. And what about the opinion of the rest of 40 (at least) percent? After all, by and large, this is a new division of the split - almost in two. Although what this is all about is all these people, who turned out to be 2014 in February in the Ukrainian government, and solve only one task - the task of total split of the Ukrainian society, of population relief, of breaking historical and cultural, social ties with Russia and strengthening of ties oligarchic sense.

Ctrl Enter
Noticed a mistake Highlight text and press. Ctrl + Enter
We are
Situational analysis of the death of the MH17 flight (Malaysian Boeing 777), made on the basis of engineering analysis from 15.08.2014Results of the week. “In our cooperative, the board is always agreed”
14 comments
Information
Dear reader, to leave comments on the publication, you must to register.