Sour milk instead of meat: What is feeding Ukrainian soldiers?

December 4 2017
68
The Ministry of Defense of Ukraine proposed to make changes to the rules for approving foodstuffs of the Armed Forces of Ukraine armed forces, according to which the possibility of replacing meat products with milk, fermented milk products and yogurt is suggested, Ukrainian media reported.


The draft decree of the Cabinet of Ministers of Ukraine submitted to the Government Committee on November 30. The document proposes to allow the Armed Forces of Ukraine, the Ministry of Internal Affairs and the Security Service of Ukraine to replace some products with others within the limits of the cost of nutritional standards and nutritional value of products, reports Nashi Groshi portal. 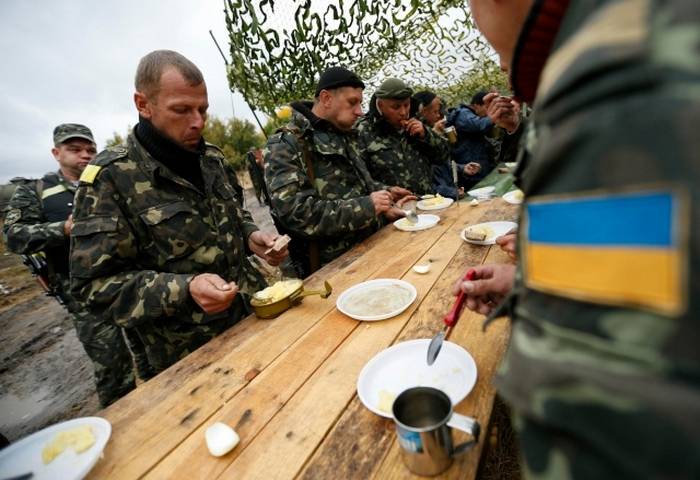 It is intended to extend these standards to the military participating in international exercises located at points of permanent deployment, at training centers, at test sites and on the territory of the antiterrorist operation.

Thus, it is proposed to extend the ruling on 2002 of the year, which referred to the possibility of "special replacement" of food for the crews of ships and ships that serve outside Ukraine. Standards have been developed to meet the specifics of the Navy. It is planned to replace meat of the first category (beef, pork, lamb, veal) with “dry milk, dry yogurt and dairy products” in the ratio 1: 0,7.

Ukraine has repeatedly reported problems with the power of the military. So, in November, during an inspection in the cadet cafeteria of the Kharkov National University of the Air Force of Ukraine named after Kozhedub in the food were found worms and cockroaches. In May, teeth of unknown origin were found in the dry piece of ATO fighters.

Ctrl Enter
Noticed oshЫbku Highlight text and press. Ctrl + Enter
We are
Weekly summary (30 January-5 February) on the military and social situation in the DPR from the military officer "Mag"Results of anti-terrorist work on Dagestan in April 2014
68 comments
Information
Dear reader, to leave comments on the publication, you must to register.