December 5 2017
1
Until the mid-twenties, the Japanese Imperial Army did not have any armored vehicles. Wishing to modernize the ground forces, the command ordered a number of ready-made armored cars abroad. Having tested such equipment, it initiated the development of its own project. Soon an armored car appeared, remaining in stories under the name Wolseley-Sumida.


It should be noted that certain details of the early history of Japanese armored vehicles remain unknown. This, in particular, is associated with some problems with information on the Walsley Sumida project. The information given in different sources is noticeably different, and sometimes contradictory. Disagreements in the materials lead to certain problems, but still there is the possibility of drawing up a fairly detailed and complete picture. Comparing the available data and comparing them, you can find out what information corresponds to reality. 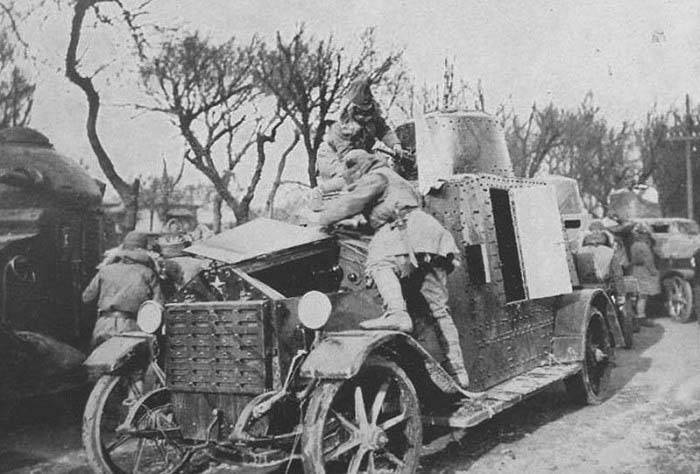 The crew is busy servicing the engine of the British assembly

For example, there is a version according to which the Wolseley-Sumida armored cars were developed by the British industry on their own initiative, or by order of Tokyo. Later in the UK or in Japan launched the production of equipment for the Japanese army. After reviewing the available information, you can see that the real history of the project most likely looked different.

There is reason to believe that the Walsley Sumida project was developed precisely by Japanese experts, albeit with the use of foreign developments, components and assemblies. It is known that since 1928, the auto plant Ishikawajima, which belonged to the Tokyo Shipyard, has been producing commercial vehicles Wolseley CP under a British license. Licensed cars bore the name "Sumida" and transferred to local customers. Soon after the start of production of equipment for civilian enterprises, the idea of ​​its military use appeared.

In the same 1928, it was proposed to make the Sumida truck, built according to the English design, the basis for a promising armored car. By this time, the Japanese army had only a few imported armored cars, and the vehicle of its own assembly would not be superfluous. The proposal to create a new project was approved and implemented as soon as possible. According to various sources, by the end of the year, the Tokyo Automobile Plant completed the design, and also built an experienced armored car of a new type.

The first Japanese armored car known under the rather simple name "Walsley Sumida", reflecting the type of chassis and the project developer in general. In addition, such a machine is often referred to as the Wolseley Armored Car or Wolseley CP. However, such names are unlikely to apply to the Japanese armored car. The fact is that this name was worn by a British armored car from the First World War. Wolseley Armored Car and Wolseley-Sumida had some common features, but still were different samples of military equipment. Thus, it is necessary to remember the risks of confusion.

Japanese engineers had no experience in developing armored vehicles, which is why they decided to borrow time-tested approaches from their foreign counterparts that corresponded to existing capabilities. As the basis for the new armored car, it was decided to take the Sumida truck chassis. On top of it was planned to mount an own-designed armored body, equipped with the necessary weapons. Such architecture, in general, solved the tasks, although it led to some restrictions. 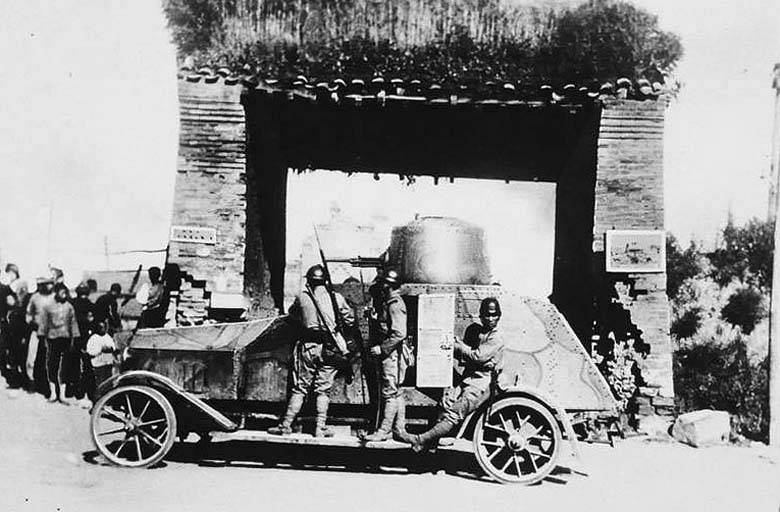 The chassis of the Walsley / Sumida truck was built on the basis of a metal frame and had a bonnet layout. In front of the frame was mounted Wolseley carburetor engine with power 30 hp A mechanical transmission was connected to the engine, transmitting torque to the rear driving axle. The chassis was composed of a pair of axles with a dependent suspension on leaf springs. Single front wheels equipped with a steering mechanism. The rear axle received dual wheels. Used wheel-mounted wheels with tubeless tires. When building an armored car with a chassis, it was necessary to remove the body, the cargo area, etc., freeing up space for the armored hull. At the same time, the wings of the wheels and the steps between them remained in place.

Japanese designers have developed their own armored hull machine. According to reports, it was supposed to be assembled from sheets of 6 mm thickness without changing the protection parameters at different sites. At the base of the case there was a metal frame on which, with the help of rivets, sheets of protection were fixed. The hull had a traditional layout. The compact front compartment served as the engine compartment; a larger rear volume was intended for the crew and weapons.

The engine and gearbox covered with a compact armored hood, consisting of several flat sheets. He received a vertical frontal sheet with an opening for installing an additional cover with perforations for the supply of air. The sides had a trapezoidal shape and slightly diverged in the rear. Above the motor was covered with a pair of sheets: they were mounted on hinges and served as manhole covers. The rear part of the engine compartment was different form and triangular roof, coupled with other components of the body. It should be noted that the main elements of the undercarriage remained outside the protected volume and were not covered with any armor details.

The habitable compartment of the Wolseley-Sumida armored hull was distinguished by its simplicity of form. Its frontal part was connected to the hood, behind which, instead of an inclined sheet, there was a frontal access hatch. The main part of the habitable compartment was equipped with boards, piled inside. Aft sheet was installed with a large slope forward. The armored car was equipped with a roof of complex shape. Its central sheet, which had a shoulder strap for installing the tower, was placed horizontally, while the front and rear parts were mounted with a slope.

The car was offered to equip with a conical turret for the installation of a machine gun. The forehead, sides and sterns were formed by a curved 6-mm armor plate, and from above the tower was covered with a hemispherical roof. The front of the turret had an opening for a machine gun. In other areas, inspection hatches and slots were provided. 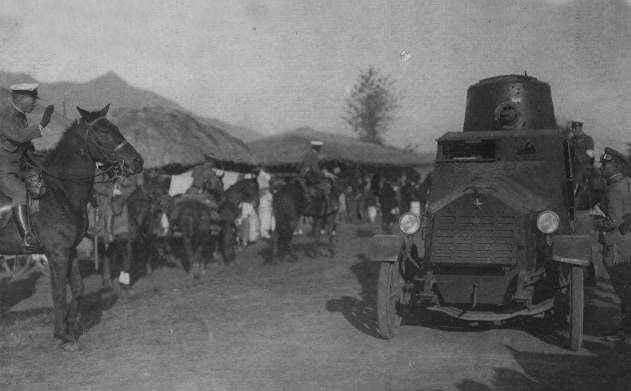 The armored car from the engineers of the Ishikawajima automobile plant was supposed to carry machine gun weapons. The available materials suggest that the 3 Type machine gun, the Japanese version of the French Hotchkiss Mle 1914 chambered for the 6,5x50 mm Arisaka, should be installed in the turret. The machine gun had ammunition based on rigid tape cassettes that contained 30 cartridges. The “3 Type” rate of fire reached 400-450 per minute. Turning the tower, the shooter could fire in any direction. The frontal installation provided vertical guidance in a fairly wide sector. The volume of the fighting compartment allowed to place bulk racks for large ammunition.

Contradictions in the sources affect the topic of weapons. In particular, there is information about the use of three machine guns at once, two of which, however, are not present in the preserved photographs. In addition, the use of machine guns "Type 91", but this information may not be true. The fact that such a weapon appeared a few years later the armored car. However, later - a few years after its appearance - serial armored cars could really get relatively new machine guns.

To manage the armored car "Walsley Sumida" should have been a crew of three. In front of the habitable compartment were the driver and his assistant. In front of their workplaces, instead of a large frontal sheet, there was an opening, covered with movable covers. In the latter there were gaps intended for observation in a combat situation. In the fighting compartment placed the shooter who ran the machine gun. He also had his own viewing instruments. The sides of the fighting compartment provided for a pair of small hatches that could be used to observe the situation or to fire from personal weapons.

Access to the habitable compartment was provided by a pair of doors in the sides, which were at the combat compartment level. With their help, the whole crew could get into the car. It should be noted that the doors were located quite high, which, apparently, was the reason for maintaining the steps between the wings of the wheels.

According to reports, the first Japanese armored car of its own design had a length of about 5,5 m with a width of 1,9 m and a height of about 2,6 m. The combat weight could reach 4-4,2 t. Specific power of the vehicle did not exceed 7-7,5 hp per ton, which seriously limited the driving performance. On the highway Wolseley-Sumida could accelerate to 40 km / h. Off-road speed and mobility fell sharply due to the use of "normal" car chassis.

It is known that the first armored car "Walsley Sumida" was built in Tokyo in the 1928 year. Soon he was handed over to the military for the necessary tests and subsequent exploitation in the army. The results of the checks remain unknown, but subsequent events show that the customer was satisfied with the acquisition. Soon came the order for several new armored cars of the same type. The exact number of built combat vehicles, unfortunately, is unknown. Nevertheless, it is possible to determine their minimum number. Up to three Wolseley-Sumida are simultaneously present in the photographs of the early thirties. 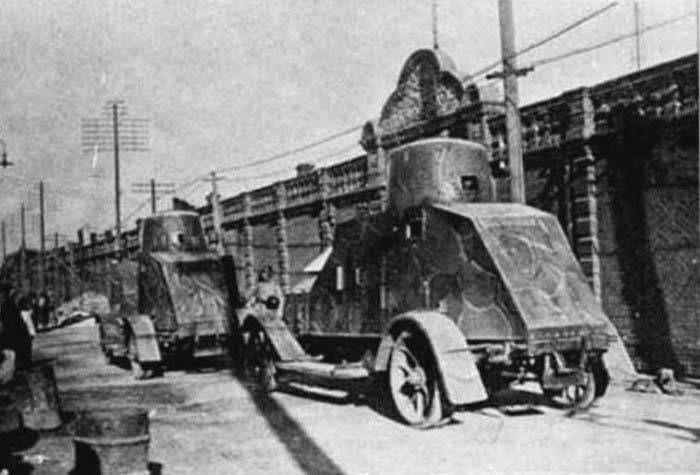 A pair of machines Wolseley-Sumida

There is reason to believe that for some time built armored cars were used by the Japanese army as part of various combat training activities. From a certain time they began to be attracted to participate in hostilities and police operations. So, it is known that no later than 1931, three armored cars were sent to Manchuria. Apparently, all the famous photographs of this technique were made on the continent.

Various sources mention that Walsley-Sumida armored vehicles were not used on the front line. At the same time, they actively participated in patrolling the roads and guarded important objects. A similar service of at least three armored cars lasted until about the mid-thirties. In parallel with them in Manchuria, a number of other combat vehicles of other types, both foreign and Japanese, worked.

It can be assumed that by the mid-thirties, the existing Wolseley-Sumida armored cars had exhausted their resources and could no longer remain in service. Accordingly, they should have been written off and sent for disassembly. The last mention of this technique is in the middle of the decade. In the future it was probably disposed of. Continuation of the operation of armored vehicles was impossible, and their restoration was inexpedient. The first self-developed armored cars could only be written off and dismantled.

In the mid-twenties, Japan purchased several ready-made foreign armored vehicles and, having mastered this technique, began developing its own projects. A few years later, the first Japanese armored vehicle appeared, based on a licensed chassis. Operation of several types of equipment showed the need to develop a fleet of armored combat vehicles. The creation of the armored car “Walsley-Sumida”, in turn, showed that Japanese experts can solve such problems on their own.

The first armored cars of the Japanese design were created on the basis of well-known and repeatedly tested ideas, as well as using foreign components, and at the same time they did not differ in outstanding technical or combat characteristics. However, the Wolseley-Sumida project was a major milestone in the history of the Japanese army. He opened a new direction and launched a large-scale rearmament.