Cinema: Artdocfest, they have their own atmosphere there ... Part of 2

December 5 2017
26
"Artdokfest", of course, one of the outstanding batteries of the politicizing public behind the curtain of art. And it can be a long time to list its individual representatives, nailed to this get-together. For example, Dmitry Bogolyubov with his picture “The Wall”, the announcement of which openly draws parallels between Stalin and Hitler. And let it be an old hackneyed song alternate from stories, which include fans and scum Vlasov. This did not prevent the organizers from including this “creation” in the main 2017 competition of the year.


Or Vera Krichevskaya. Already from the name of her picture about Boris Nemtsov "Too free man" blows the musty smell of the bloody prison in which the protagonist of her band had to live. And, of course, we will draw a lot from her film, because it is filled with testimonies of such “objective” citizens as Yavlinsky, Ilya Yashin, and idol of youngsters Alexei Navalny. And in general, Vera Krichevskaya (one of the founders of Dozhd who worked for several years in the holding of the Ukrainian oligarch Pinchuk) could not take a picture that was not noticed by this “fest”.

But the real cherry on the cake of this holiday of handshake is Vitaly Mansky, the permanent president of Artdokfest. Firstly, at this cinematic, it seems, festival, he is one of the few who shot more than 10 documentaries. Secondly, he is also one of the few who is known not only in the artificially bloated opposition cocoon. 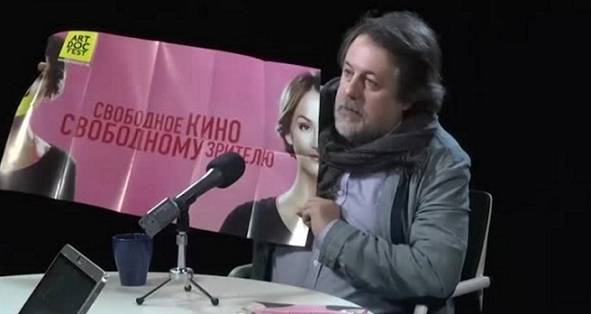 Vitaly Mansky moves freedom to the people, and his own "fest" at the same time

True, this fame he received most likely due to scandals in the media, in very specific media. The next-to-last round of his “glory” was the scandal surrounding his departure from Russia. This departure was trying to turn into a colorful drama, full of pathos, even with an attempt to put a dissident's crown of thorns on Mansky. Can you imagine what help a peasant in a career?

But the fact was that the Ministry of Culture refused Mansky to finance his next film “Natives” about events in Ukraine. How dare they? After all, this is a real dictatorship! After that, the citizen Manski, already looking like a sad Shar-Pei, finally became sad, stamped his leg and left for Riga in 2015 year. Before leaving, correcting the brilliant crown of thorns on the move, Vitaly made a whole voyage to the media, in which he tragically stated that he was leaving because he was banned from the profession (in translation into Russian, they didn’t pour money into the budget).

As a matter of fact, you can’t argue, because as it turned out, all those who sneezed the Soviets with their state orders, dreamed of a free and rich market, are not viable on this very market. These comrades are so talented and so in demand that there are no wealthy people willing to invest money in them. 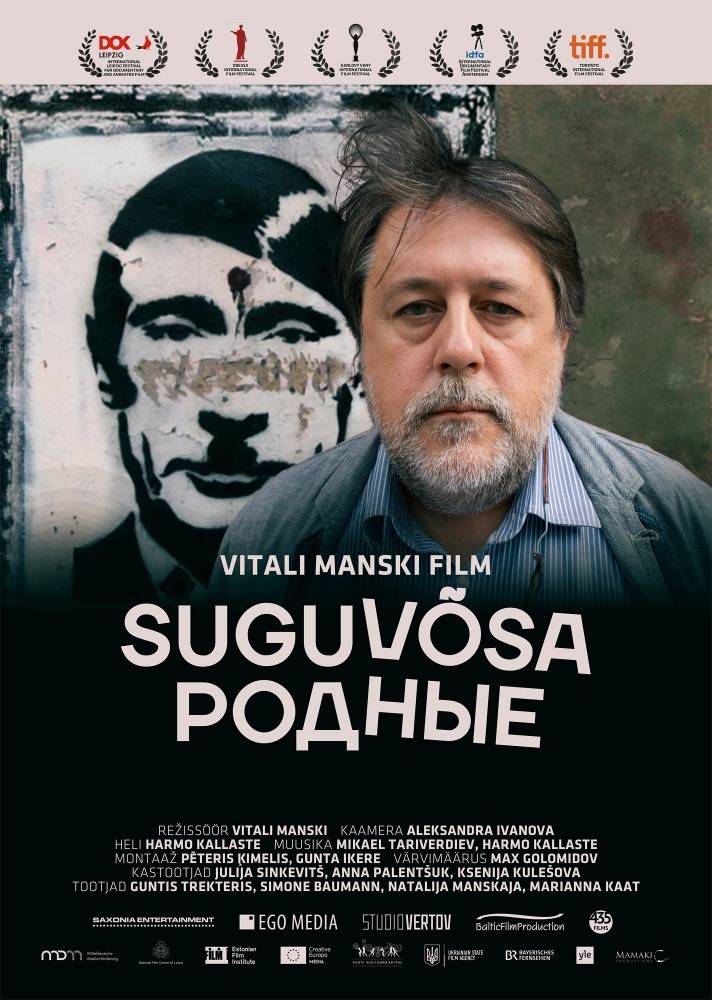 The machine-gun tape of laurel brooms of various festivals should apparently bribe the viewer ...

As a result, Mansky shot his “masterpiece”, admire the poster. Well, here it’s just like in a joke - “Let the neighbor eat, or there’s nothing to spoil you under the door”. Moreover, Vitaliy, a native of Lviv, is certainly unbiased and without any conflict of interest, just traveled around his relatives and thus “described” the situation in Ukraine. No, of course, the relatives of Mansky in their natural habitat, and even against the background of the plaintive dim picture peculiar to him, looked "mimish" sad.

Count on a deep analysis of the events in this film is not worth it in principle. After the phrase of one of the kitchen experts, the ladies, who in the frame shredded vegetables, they say, they feel sorry for Crimea, let them take the Donbass - all questions have disappeared by themselves. And again the anecdote comes to mind - “for whom I take you, we have already figured out the whole question of price”.

But Mansky himself values ​​his work extremely highly. Moreover, in an interview with Dozhd, Vitaly so inflated his own ego and declared that with his film “The Natives” he gave a “slap in the face” to the officials. Is it true that officials know about the existence of such an individual as Mansky in nature - a big question ... At the same time, Vitaly, like a parrot on a perch, continues to repeat that his “Artdocfest” is not a political action.

In one, this citizen remains consistent. There are not many countries left on the planet that stubbornly don’t want Western “happiness” left without “exposure” on the part of Mansky. For example, in the movie "In the Rays of the Sun" went to North Korea. By the way, in agreement with the latter, Mansky was supposed to shoot a completely different movie, but “through the slit” took off and assembled later what the pro-Western party was waiting for him.

In the picture about the DPRK, when it was difficult to find black tones for the desired picture, Vitaly used, it is true, the most simple-minded artistic technique, or maybe he is the only one. Mansky imposed theatrical mourning music on ordinary everyday cadres of life and accompanied it with his no less dramatic, tragic voice with the necessary intonation. This reception is so primitive that even the Ukrainian feykomety took possession of it, when a depressing melody was laid on the video track of the “deserted Russian Crimea” (the season was just over) and they wiped away a hulk of tears. So the viewer opened a picture of terrible totalitarianism ... 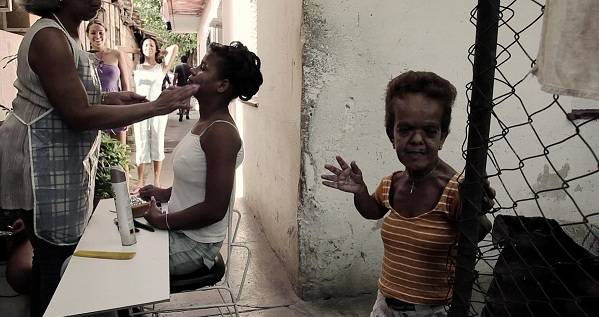 Character shot from the film "Homeland or Death", filmed by Mansky in Cuba

A portion of the “revelations” went to Cuba. On this colorful island, his cell rarely left shacks. It was so striking as if there was no other Cuba at all. There is no highly developed health care system, there is no high enough standard of living for this region, etc. Moreover, such a long time spent in the cocoon of his company played a cruel joke with Mansky. He forgot that, contrary to his vision of a “poor bloody mordor”, many of our compatriots have already visited many countries of the world, including Cuba. And just these citizens have questions, why with such ecstasy the director dug only in the island dump, ignoring other aspects of the life of Cubans? A rhetorical question.

However, film critics either do not notice the “creativity” of Mansky at all, or write about it with delight. Neither is surprising. The first is due to the degree of fame of Vitali that even oppositional hamsters are mostly unwittingly asked - "who is this." And second, the fact of the deep objectivity of our film critics. Here, for example, Antosha Dolin, who sings the film “Native” praises, rant about the fate of the Russian people through the frank criminality of the unsuccessful terrorist: “Sents are sent to a strict regime colony for twenty years to be free. This is not the age of freedom for all of us here. By the way, this does not prevent Antosha from broadcasting on Vesti FM state radio. Well, they do not smell.

The final touch to the portrait "Artdokfest" will be "Mikhail Prokhorov Foundation", which is listed as the general partner of the liberal get-togethers. On its official website, the foundation draws “fest”, and, accordingly, its considerable participation in it, downright heroic colors. What looks funny, because the figure of Prokhorov, even in feverish delirium, is not associated with heroism.

But one should not think that the foundation feeds the opposition pro-Western company only through the “fest”. These guys are extremely versatile. For example, their own project, the literary award “FNL” is a no less effective platform for gathering citizens' handshaking.

Lev Rubinstein surrounded by the right circle of friends, second from left. I'm not sober, but you can't do without a glass?

In 2012, the winner was Lev Rubinstein, a well-known fighter for the rights of LGBT people, the release of Pussek and the withdrawal of Russian troops from the territory of Ukraine. 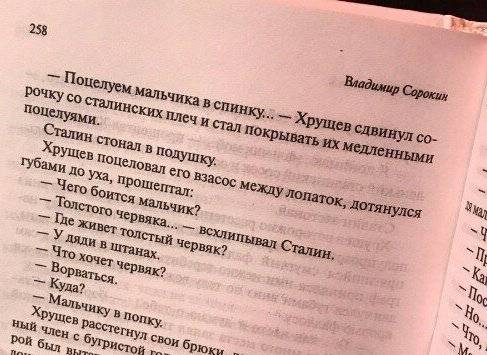 An excerpt from another work Sorokin called "Blue Fat", read carefully, do not stain the keyboard

And in 2009, 2010 and 2014, the prize was received by Vladimir Sorokin, mediated defender of Madame Savchenko, Ildar Dadin, and, without him, a bent bomber Sentsov.

Ctrl Enter
Noticed oshЫbku Highlight text and press. Ctrl + Enter
We are
Cinema: Artdocfest, they have their own atmosphere there ... Part of 1Yashin presents "Nemtsov's report" in Lithuania
Military Reviewin Yandex News
Military Reviewin Google News
26 comments
Information
Dear reader, to leave comments on the publication, you must sign in.