December 5 2017
97
The risk of war in the coming year is quite high, and there is no reason to expect peace, Swiss experts believe. There are two hotbeds of tension, and both can cause global conflict. Not far off is the new year, and with it the war. The most amazing thing is that in such forecasts from Switzerland no Russians are mentioned. Totally. 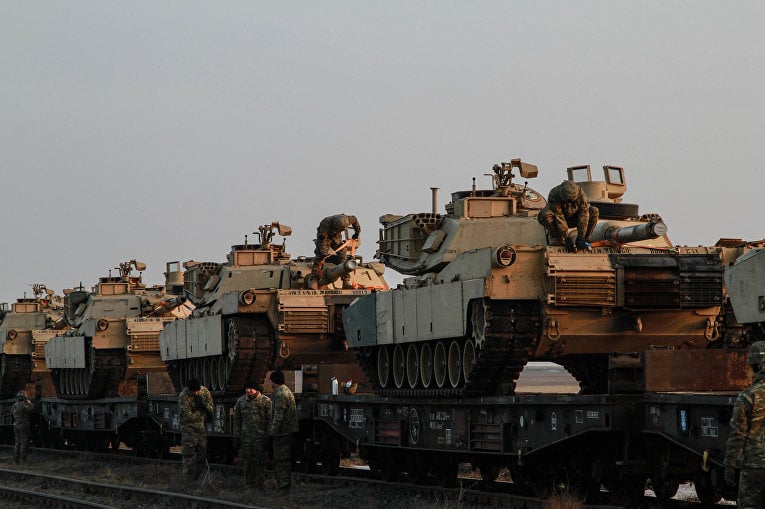 About the risk of war, which will break out in 2018, argues the former ambassador, and now a newspaper columnist "The weather" (Switzerland) Francois Nordmann.

In the coming year, two hot spots can lead to war, warns Nordmann. The main actors will be North Korea, Saudi Arabia and Iran.

“The geopolitical situation” in the world “continues to deteriorate,” and the risk of war increases, even if “the population is not aware of this,” writes the author. “Of particular concern” are two hot spots: the Korean Peninsula and the Middle East.

What are the plans of North Korea? On this account is the opinion of a reputable expert. Mark Fitzpatrick, a nuclear specialist from the International Institute for Strategic Studies in London, talks about the 50-percent probability of a war with North Korea as early as the 2018 year. North Korea is unlikely to abandon its nuclear experiments and missile program, despite the pressure of the United States and China.

North Korean Foreign Minister Ri Yunho has already warned the United Nations: nuclear tests are planned in the atmosphere over the Pacific region. So can we imagine that in these conditions, the American President Trump will not react to Pyongyang’s behavior, as he stated, “with fire and rage”?

Trump, it is indicated in the material, "may wish" to destroy North Korea’s launch sites and nuclear production points. weapons. Some people are "deceived," believing that the Kim Jong Un regime will not dare to strike back "because of the fear of a massive retaliation from the United States, Japan, and South Korea."

Mark Fitzpatrick admits: the proposed exchange of blows may fall into the category of "psychological warfare." This kind of message can also be addressed to China, which, according to Washington, should not relieve the pressure on the DPRK and to which the UN sanctions should be applied “more strictly”.

Yes, North Korea does not give any obvious signs of an “immediate attack” of a nuclear strike. However, the current political season is not over yet. The spring will be known, the analyst notes, whether North Korea will refuse "its provocations" (talking about tests. - O. Ch.). If he does not refuse, continues Nordmann, then what will be the “appropriate response of the international community to these actions”?

And really: how to respond without risking a kindling of the Korean war?

And then there is another war on the way.

The analyst identifies the standoff between Tehran and Riyadh as the next focus of tension.

At the other end of Asia, Iran and Saudi Arabia are participating in another “militant rhetorical escalation,” accompanied by the roar of marching boots.

Here the interests of the players were distributed “unevenly”. Riyadh is concerned about the Iranian offensive, because Iran is advancing in the region after the collapse of the “Daesh” (“Islamic State” banned in Russia). The influence of Tehran has already spread to Iraqi Kurdistan, Syrian Kurdistan and Turkey. Iraqi forces, united with the Iranian Revolutionary Guards, captured the cities of Kirkuk and Erbil, while the Americans simply abandoned their former Kurdish allies, who fought with them against Daesh.

A new alignment of forces in the Middle East is in addition characterized by the strengthening of Iran in the Mediterranean.

All this “causes concern” in Saudi Arabia and the United Arab Emirates.

A recent rocket attack on Riyadh attributed to Iran’s allies in Yemen, stuck in a war, political maneuvers of Crown Prince Mohammed bin Salman, doing everything to strengthen his claims to the throne and modernize the kingdom, tensions around Lebanon, due to the technical resignation of Prime Minister Saad Hariri, leads to concerns of the analyst about the "opening of the new front."

2018 year will not be the year of the world; the risk of war in the world remains high, sums up Francois Nordmann.

Louis Lema in another room the same newspaper agrees with his colleague on the pen.

The threats of Donald Trump, he writes, have caused "tensions in the region." Will the United States, and with them a large part of the world, have such “tweets” to estimate the consequences of “fire and rage” that Mr. Trump promised the North Korean leader? What will happen? A military escalation will begin when the one who “nervously prepares for a possible war” stops the verbal “reaction” and makes an irreparable! Otherwise, all the words of Trump will show the world that all these statements are an empty threat, and in this case, the United States will be discredited: they will be considered a “paper tiger”.

The border between the two Koreas is one of the most militarized regions of the planet, and the military and strategists of all stripes and shades had several decades to foresee and think through all possible scenarios and prepare for them, the author recalls. Several times the United States retreated after advancing in provocations against the DPRK. In the 1994 year, for example, the Pentagon was accused of planning "surgical attacks" on a nuclear reactor in Yongbyon. The Americans suspected that plutonium was produced there for military use.

And what about the Korean nuclear program?

More July 28 Pyongyang launched an intercontinental rocket, theoretically capable of reaching the United States. After five nuclear tests, the country has probably already accumulated a large number of nuclear weapons. And nothing prevents Pyongyang from already placing its nuclear warheads on short-range missiles, aiming at South Korea, Japan or ... the American island of Guam, which North Korean propaganda loves to mention.

The games are over, says Jeffrey Lewis, a recognized expert at the Middlebury Institute. In his opinion, it is useless to continue pretending that North Korea has not become a “nuclear power.”

So now what? Limited hit?

Pyongyang’s “beautiful nuclear separation” from the entire planet is a real blow to the problem of non-proliferation of nuclear weapons, the author believes. This is likely to provoke new aspirations in the region, as well as convince Iran to abandon the agreement on the nuclear program. It turns out that the United States, which is putting pressure on Iran, should “return to work” the idea of ​​limited strikes on North Korea and negotiate from a strong position?

Nevertheless, one should be sure that the Pyongyang regime correctly understands this kind of “intent”. Statements like "fire and rage, which the world has never seen" are unlikely to "calm" the North Korean leader, that is, they will force him to abandon the nuclear program and in general the idea of ​​arming himself. All the way around! Along the border, the North Korean regime deployed "thousands of artillery guns." If Kim Jong-un had only “felt himself” attacked, he could have subjected Seoul and the periphery of the city to a real flurry of fire. Only at its very beginning such a blow would have killed tens of thousands of people. How much time would it take to overcome this “armada” of Kim Jong-un, scattered across the country or hidden at the bottom of bunkers in the mountains?

The United States has little reliable information about this closed country. Here, even cyberwar in the full sense of the word is impossible. So, means a full-scale war?

But after all, there is a nuclear threat, albeit "in the background." Therefore, the prospect of total war is "unthinkable." At least for America. Under this scenario, the United States must deliver thousands or tens of thousands of its soldiers to the region. Apocalypse, which Donald Trump apparently promises to be verbal, threatens the lives of 25 millions of North Koreans and 50 millions of South Koreans, almost half of which live less than 100 kilometers from the border.

In addition to its nuclear potential, North Korea also has large stocks of biological and chemical weapons.

Maybe there is a third option?

“It's not too late,” Susan Rice wrote in a column published recently in the New York Times. (Susan Rice is a former US national security adviser. - O. Ch.) Washington lived for a long time with the "vibrant militant rhetoric" of the Kimov dynasty, she recalls. In her opinion, Comrade Kim may be "cruel and impetuous," but the behavior of the leader is quite rational.

Wait a minute, so what is this, a recipe from another "former"? Ordinary deterrence? Building up sanctions? And a close dialogue with China in order to fulfill all the agreements reached with the United States in relation to the DPRK? “A rational and stable American leadership can avoid a crisis,” the former adviser said.

What is this “rational and stable”? Same as Kim Jong Un?

Rationality in general seems to have disappeared from the politics of the 21st century. Everyone in his own way, but goes crazy. And Swiss analysts and experts are right in one thing: from the madness of the ordinary to the military - one small step. It is enough for some "rational" to conduct an unsuccessful test! ..

As for Iran, the pressure exerted on this country by the rational administration of Trump, who declared Iran to be a sponsor of terrorism, may well lead Tehran to the idea of ​​arming itself with nuclear missiles in the manner of Kim Jong-un. Purely for defensive purposes!

By the way. The Russian “threat” among Swiss analysts is not mentioned at all.

Observed and commented on Oleg Chuvakin
- especially for topwar.ru
Ctrl Enter
Noticed oshЫbku Highlight text and press. Ctrl + Enter
We are
Saudi Arabia is preparing for a big warResults of the week. "It seems to be molded, but it is not molded ..."
Military Reviewin Yandex News
Military Reviewin Google News
97 comments
Information
Dear reader, to leave comments on the publication, you must to register.