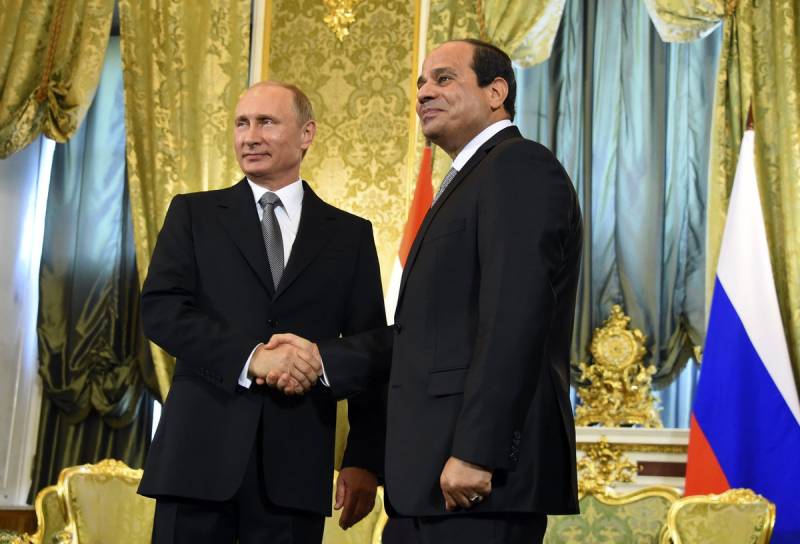 According to a document published on Thursday, Russia approved a draft agreement with Egypt on the use of Russian military aircraft at Egyptian military bases. Such a deal will allow Moscow to leave an even clearer mark on the Middle East.

The directive, signed by Russian Prime Minister Dmitry Medvedev and published on the official legal information portal, approves the draft prepared by the Russian Ministry of Defense and instructs him to sign a deal with Egypt.

The deal between Russia and Egypt, which will allow the combat aircraft of each of the two countries to use each other’s air bases, will enter into force for five years and can be extended by mutual agreement.
For Egypt, this deal is more important as the government of President Abdul-Fattah el-Sissi expanded military ties with Russia and signed deals to buy Russian fighters, helicopters and other weapons.

Russian Defense Minister Sergei Shoigu visited Cairo on Wednesday, noting that the intensity of military cooperation between the two countries has recently increased, as Egypt made new orders for Russian weapons.

He also expressed condolences over the incident in a mosque on the Sinai Peninsula in Egypt last week, which resulted in the death of Friday’s 305 people - the bloodiest attack of Islamic extremists in modern times. stories Of Egypt.

The local branch of the IG * did not officially take responsibility for the attack on the mosque, although the militants who disguised themselves as worshipers carried with them the black banner of the group. The branch of the IG * took responsibility for the fall of the Russian passenger aircraft in October 2015 of the year in Sinai, as a result of which all 224 people were killed, mostly Russian tourists.

Representatives of the IG * declare that they blew up the plane with a bomb carried aboard; This version is confirmed by Russian investigators. The incident forced Russia to reduce commercial flights to Egypt, which dealt a heavy blow to the country's vital tourism.

Moscow and Cairo held talks on improving airport security and resuming air traffic, but an agreement has not yet been reached.

Egypt was Moscow’s closest ally in the Middle East in the 1950s and 1960s, when nationalist leader Gamal Abdel-Nasser turned away from the United States and supported the Soviet Union. Nasser's successor, Anwar Sadat, ended all relations with Moscow and deported Soviet military advisers.

Russia raised its rating in the Middle East region thanks to the military campaign in Syria, which allowed the war to change in favor of Syrian President Bashar Assad. Now Russia has its own Syrian air base and seaport.

El Sissi tried to quell the Islamist unrest in Sinai. On Wednesday, he gave his security services security forces three months to restore “security and stability” in the troubled northern part of the peninsula and authorized his new chief of staff to use “all the hard power” against the militants.

Ctrl Enter
Noticed oshЫbku Highlight text and press. Ctrl + Enter
We are
The unexpected war of Hitler's Germany with the USSR (part 4)Military reform as an integral part of the security concept of the Russian Federation: Systematic dynamic assessment
Military Reviewin Yandex News
Military Reviewin Google News
27 comments
Information
Dear reader, to leave comments on the publication, you must to register.