December 4 2017
25
London can hardly withstand the “Putin regime”, say intelligence agents from the British service MI-6. Experts understand that their country is too poorly equipped to counter Putin. Foreign observers note that the Russian rich in London are turning into the cream of English society. Can the UK cope with such an invasion? 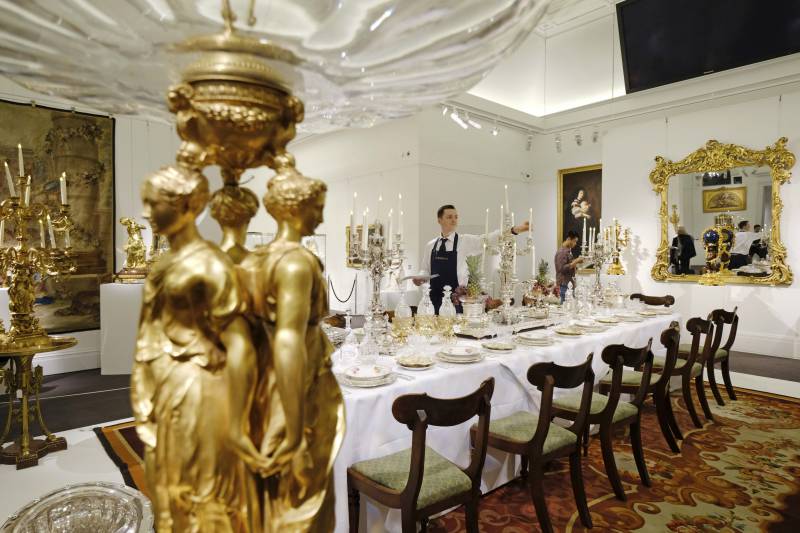 On the theme of the confrontation between Britain and Russia argues in the influential newspaper «The Times» Edward Lucas.

They are sure in MI-6: from the side of Russia the “threat” is growing. According to Lucas, the attitude towards the threats of the “Putin regime” in the UK has finally changed, but the state is too poorly equipped to withstand this foreign danger. The trouble with the British is that they are overly self-confident. And this self-confidence has strengthened over the past twenty-five years, when the Cold War was forgotten. But now, if you listen to the opinion of the scouts, everything that is past is being revived. Already not only at the level of Great Britain, but also at the level of NATO.

At the headquarters of the North Atlantic Alliance, Alex Younger, head of MI-6 (UK secret intelligence agency), spoke. The head of this department told the people of NATO that the Kremlin “proved to be an example” of the threats that face both London and its allies.

The boss also spoke about the Russians goal. The goal of the Kremlin is to split the West and generate some ambivalence in the perception of the situation, dilute the assessments, make the understandable incomprehensible, so much so that even the difference between war and peace will turn into something vague and unsteady. The previous model of military conflict is no longer valid: until now, the actions of the opponents gave 80% the use of military force, and the remaining attacks were the remaining 20%. Now all the way around!

In addition, the intelligence officer said about the "impunity" of the Kremlin. This comes from the reluctance of the West to respond to Russian "provocations." In the end, it turns out that the West is not responding with anything, and therefore "tension" can only grow.

And such a lesson intelligence learned from the reality of two and a half decades! Why did this happen?

In the first half of 1990-s, Russia “dictated the rules”, and it accepted the norms of others. But then it turned into a state that only "creates the appearance" of submission to the rules. Moscow pretends to observe international agreements, but in fact violates them. The reason for this behavior is the rise in oil prices. Because of this, and also because of the growth of "Putin's influence" in the political system, the Kremlin became a "violator of the rules" and began to threaten the "world security order." Here are examples: from cyber attacks in Estonia (2007) to military intervention in Ukraine (2014). Moscow does not shun bribery, propaganda, sabotage (for example, a failed coup in Montenegro), indicates the publication.

But did London do something? Nothing like this! Together with other countries, the UK only complained. That is why Russia decided that she was given a carte blanche for interference in the internal affairs of Western countries, including large countries.

And only from the beginning of 2017, the national security service of Britain "raised" Russia, raising its position in the list of threats to the "first level". In addition to Moscow, the list includes cyber attacks and terrorism. After half a year, a strategy was developed against Russia. Its elements are the expansion of the capabilities of the military response, opposition to Putin's propaganda, curbing Russian intrigue on the fragments of the former Yugoslavia, protection of computer networks from Russian cyber-weapons, support for Ukraine.

A special point is the operation to complicate the life of the Russian elite.

Those people who were previously worried about the influence of Russian money on the British financial system, are now squeezed out of the political game, are indicated further in the material. However, the person responsible for the past policy, basically deny everything, says the intelligence officer. And if so, the British "are constantly caught off guard." It is easy to explain: intelligence does not have enough information about the plans of the Russians.

It comes to incidents. If the Russians call their Moscow "the third Rome" (this is fashionable, and this implies a reference to the Roman and Byzantine empires), then the same Russians call Britain the name "Carthage." But this means the complete destruction of the UK! Is it just rhetoric? Or a direct threat? The Russians, after all, are conducting exercises! Maybe the Kremlin believes that a nuclear war is already inevitable? That would be to know the answers to these questions, admits the scout.

The article mentions some more unpleasant facts for London, which give the reader an idea: there is simply no political will from the current leadership of Britain.

Russia’s ties to Mr. Trump in the United States are not worth mentioning. "Brexit" - again Russian. City in London is now "Londongrad." Local businessmen are rubbing their hands, thinking about the quotes of an industrial conglomerate controlled by Oleg Deripaska, a Russian oligarch.

Londongrad, we note, really became a new reality for the British.

Foreign observers note that the Russian rich in London are turning into the cream of English society. Can the UK cope with such an invasion?

Katrina Marsal in the Swedish newspaper Dagens Nyheter (translation source from Swedish - "InoSMI") notes that the Russian rich want to live in London like the upper strata of British society.

Earlier, at the balls, representatives of the higher strata of British society usually brought their daughters to the rally, but today the debutantes are brought out by the Russians.

If earlier in the English boarding schools, young representatives of the ruling class of the British Empire received education, now such schools are “full of Russian children,” the journalist writes.

Welcome to Londongrad! By the way, Russian is not the only name for the city. There is another option: Moscow-on-Thames.

This is where the ball (literally, too) is ruled by wealthy Russians who can afford to buy property in London, and at the same time a British visa. The price of the latter is a mere trifle, about a couple of millions of pounds sterling. That is what you need to invest in British government bonds or companies if you want to live permanently in Moscow-on-Thames. The obtained visa is valid for three years, then it can be extended for another two years. Anyone who has been in the country for five years has the right to obtain citizenship.

There is Red Square in London. So called Russian Belgrav Square near Buckingham Palace. “Red Square” is called this place because many Russian rich people got houses here. London architects know how Russians like to work: outside it should look like a Victorian house, and inside like a luxurious apartment in American Manhattan. In London, however, it is impossible to build tall buildings, and therefore the Russians order large basements: minus the second floor, minus the third. Under the ground they have pools, gyms, home theaters.

As a result, the Russians became a symbol of London, which is ready to serve the international class of the super-rich. “The city washes their shirts and launders sports cars, as well as money,” writes the journalist. And the city does not ask any extra questions. At least, critics say so. It’s no joke: there are more than 150 thousands of Russians living in London! And the British think that all these people are oligarchs. They drive “big black cars”, with “armed bodyguards” in attendance.

Of course, in fact, most Russians in modern London are not oligarchs or billionaires, but upper middle class people who want to live a life that is “inaccessible in Russia”. Why such a life is “unavailable” in Russia and why Russians are so drawn to living in London cellars, the Swedish journalist doesn’t explain much. Maybe she should go in the direction of Rublyovka and write another report.

Complaints of British intelligence officers, classified and not very clear. How to cope with the "Putin threat", if the native London has already turned into Londongrad, and even in Moscow-on-Thames? The city even has its own "Red Square"! Around the oligarchs and their heavily armed guard. No, no, yes, and there is a glimpse somewhere in the queue for a Putin visa.

It seems that not only NATO, but also British intelligence put an end to the constant shadow of the Russians in London. Soon, in the Parliament and in the Ministry of Foreign Affairs, when discussing the next question, they will say: “What will the Russians think about this?”

Ctrl Enter
Noticed oshЫbku Highlight text and press. Ctrl + Enter
We are
Situational analysis of the death of the MH17 flight (Malaysian Boeing 777), made on the basis of engineering analysis from 15.08.2014Results of the week. “In our cooperative, the board is always agreed”
Military Reviewin Yandex News
Military Reviewin Google News
25 comments
Information
Dear reader, to leave comments on the publication, you must to register.