Hydroaviation of the Japanese submarine fleet in World War II. Part I


The idea to use submarines as carriers of seaplanes originated in the years of the First World War. By this time, seaplanes were actively used fleets many countries of the world (mainly as scouts and spotters). Float hydroplanes were used both from coastal bases and from special ships - air transport. The latter were used only for storage and transportation. Takeoff and landing of hydroplanes was carried out from the water in the immediate vicinity of air transport, and launching and lifting aboard using special cranes.

The first practical experience of using a submarine as a carrier (delivery vehicle) of a seaplane was carried out by the German Navy in January 1915. The experiment involved the submarine U-12 (captain Walter Forstmann) and the Friedrichshafen seaplane FF29 (commander - Lieutenant Friedrich von Arnold de la Perrier), which was a single-engine two-float biplane. The multi-purpose double hydroplane FF29 in the shock version could carry up to 12 kg bombs. But his flight range was small. London, located on the opposite bank of the English Channel at the mouth of the River Thames, at a distance of 160 km from the home base of German hydroplanes in Zeebrugge was unavailable for Friedrichshafen. 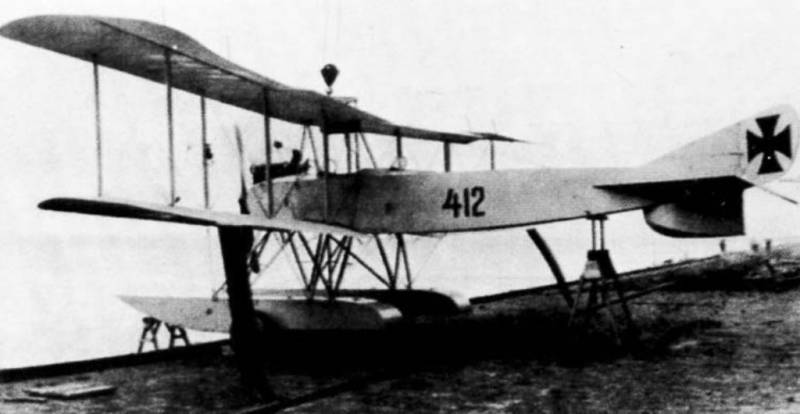 6 On January 1915, the German U-12 submarine, on the surface with the FF29 seaplane placed on its deck, made an 16-mile transition and, at a distance of 15 miles from the Thames Estuary, launched the Friedrichshafen into the water. The seaplane took off safely and completed a combat mission, causing considerable surprise at the British coastal defense. After completing the job "Friedrichshafen" FF29 returned to its base in Zeebrugge, and the submarine U-12, respectively, to his. 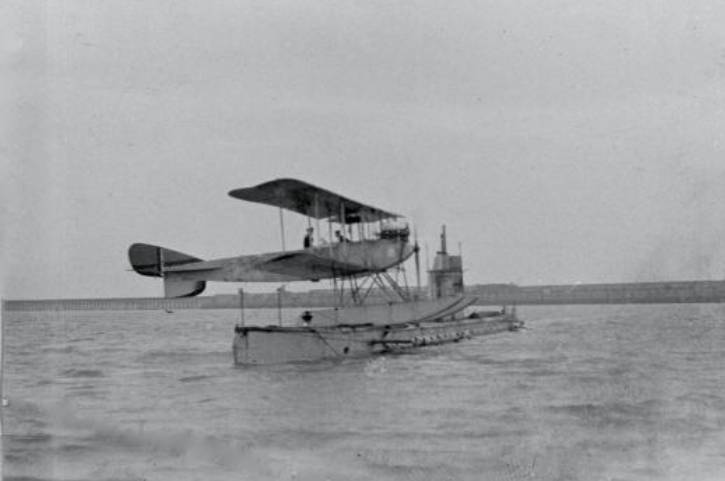 German submarine U-12 with the Friedrichshafen seaplane FF29 on board, 1915 year

This experiment clearly demonstrated the possibility and tactical feasibility of using submarines as carriers of seaplanes in order to significantly increase their combat radius. However, this positive experience has not received further continuation. The British increased patrols in the English Channel and the German High Command considered it impractical to strike at British territory in a similar way, preferring heavy aviation and airships.

On the other side of the English Channel, they took the new tactics more seriously. Having carefully studied it, the Admiralty sent the E-22 submarine for revision to ensure that it is based on the surface of the two Schneider seaplanes on the surface. Behind the submarine cabin, rail guides were mounted, where hydroplanes were placed during the hike and along which they slipped into the water (during the roll of the boat) to take off from the surface of the water.

In April, the X-NUMX submarine E-1916 with two hydroplanes on board set off on a mission in the direction of Helgoland island to destroy the German Zeppelin base located there, from where they raided the British cities. However, the bad weather and strong seas made it impossible to complete the task. This failure forced the British to abandon such tactics for a while. 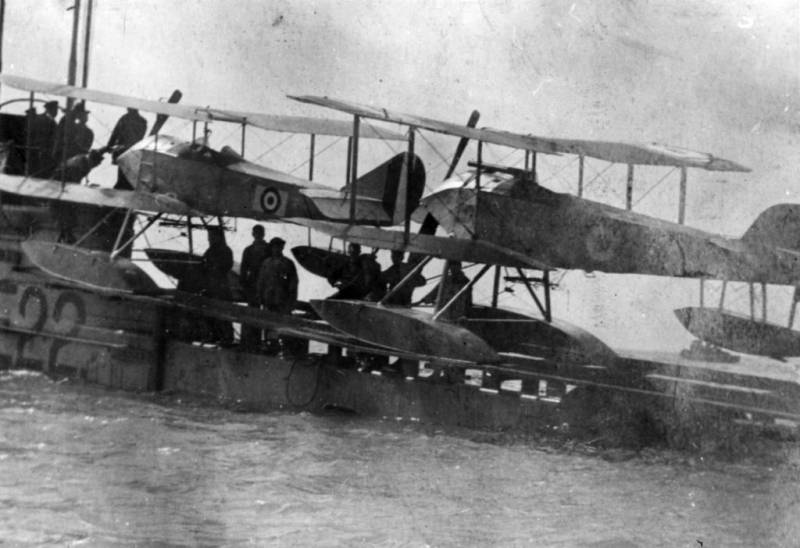 Meanwhile, back in 1915, the British aircraft designer Pemberton-Billing suggested using a waterproof hangar for placing on submarines planes in a folded (disassembled) form, which would allow submarines to secretly reach the line of launching seaplanes. However, the Admiralty did not wish to give this progressive idea due attention.

In 1917, Germany again turned to the idea of ​​transporting seaplanes on submarines. For those under construction by a large series of submarine raiders-cruisers with a range of 17500 miles and a full tonnage of 2760 tons (U-142 - U-150), aviation weapons were also provided. The reconnaissance aircraft were planned to be placed on the deck in an airtight container disassembled. 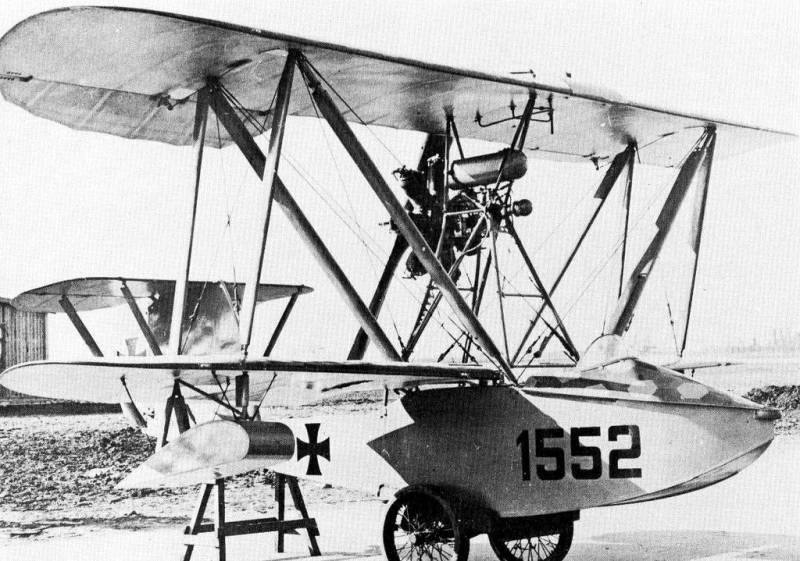 For these purposes, Ernst Heinkel developed the flying boat “Hansa-Brandenburg” W20 (Hansa-Brandenburg), which won other projects in the competition. The single flying biplane boat W20 had a compact size, light weight (396 kg) and, equipped with an 80-strong engine, developed a maximum speed of 117 km per hour, the flight duration was 1 hour and 15 minutes. W20 in a disassembled form easily fit in the hangar of a submarine 6 meters long and 1.8 meters in diameter. Assembly time before departure was only 3.5 minutes. In total, three W20 Hanse-Brandenburg flying boats were built, which were used by specially converted U-139 and U-155 submarines.

Of the entire series of pledged submarine raiders, only U-142 reached the tests. During sea trials, the submarine showed poor handling and extremely low stability.

In 1918, Luftfarhzeug Gesellschaft offered its own version of an aircraft for the LFG V.19 “Putbus” submarine. The single float monoplane was easily disassembled and could be freely placed in a waterproof hangar on board a submarine. If necessary, the “Putbus” disassembled into V.19 parts could be “packed” into seven cylindrical sealed containers up to 4.5 meters in length and 0.7 meters in diameter. A team of five people collected the disassembled V.19 in 15 minutes. Only one prototype was built, with a 110-strong engine, which develops a maximum speed of 180 km per hour and has a practical flight range of 360 km.

The defeat of Germany in the First World War forced to roll all these promising developments.

In the United States and Japan, closely followed the German experiments on the creation of aircraft for submarines. Already in post-war Germany, under the strictest secrecy, they began to develop another project of an aircraft carrier submarine. For the new project, Carl Caspar (Chief Designer Ernst Heinkel) developed an all-wooden seaplane “Caspar” (Caspar) U.1, which can be disassembled in a cylindrical hangar with a diameter of 1.8 meters and 7 meters in length. Four people could assemble a disassembled aircraft in a few minutes. 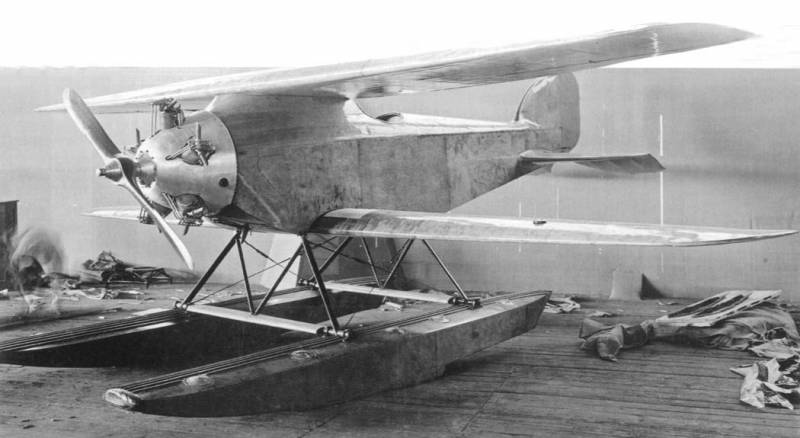 The prototype U.1 seaplane was built by Hanseatischen Flugzeugwerke and made its first flight in the 1921 year. The aircraft, equipped with a 55-strong engine, developed a maximum speed of 145 km per hour and had a practical range of 360 km. After successful tests on U.1 followed by orders for the supply of a US Navy seaplane and Japan. Orders were filled in 1922 and 1923 respectively. German U.1 was considered in these countries as a base model for further own developments. 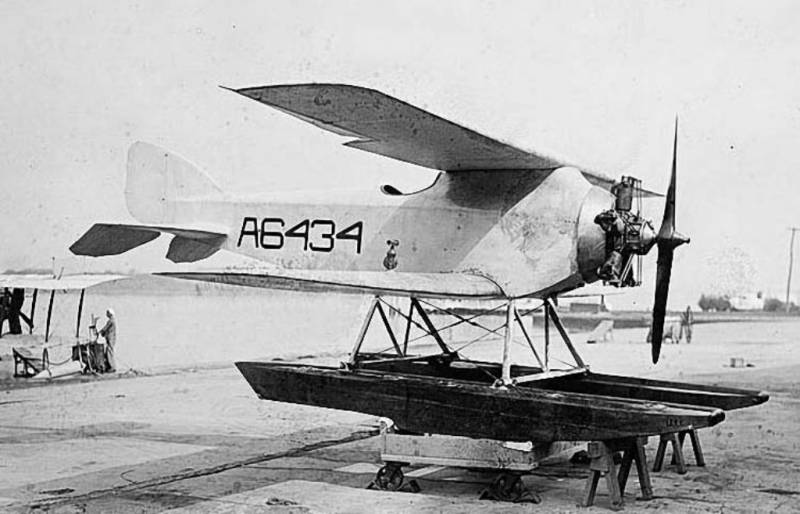 In the United States, the Cox-Klemin Aircraft Corporation (Cox-Klemin) built six XS-1 solid wood warships. At the same time, another firm, Glenn L. Martin (Glenn L. Martin Co), built six MS-1 seaplanes of mixed design. Both types of aircraft from the autumn 1923 of the year began a test program on board the S-1 submarine with a displacement of 800 tons, equipped for this purpose with a cylindrical hangar with a diameter of 2.44 meters, which was located behind the cabin fencing. 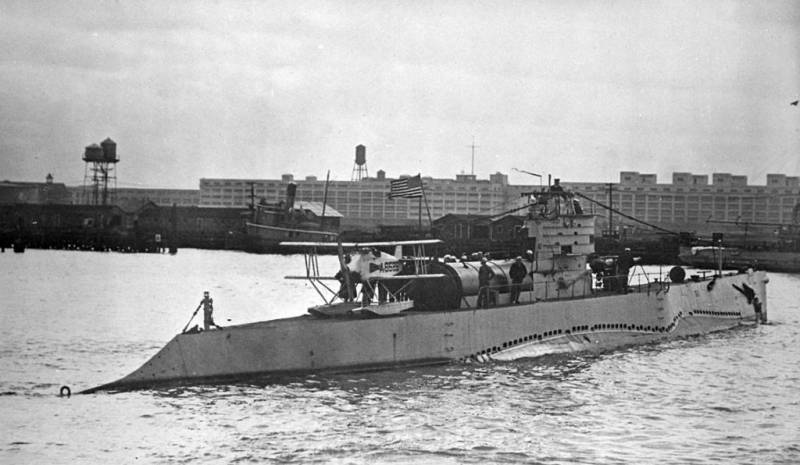 On board a US Navy submarine S-1 (SS-105) equipped with an aviation hangar an experimental seaplane "Martin" MS-1, 23 October 1923 of the year

The tests allowed to determine the required time to prepare the aircraft for takeoff and minimize it, since it initially took four hours. Test results were summarized during the summer of the 1926 year. Based on these results, a modified version of the XS-2 hydroplane with a maximum speed of 185 km per hour with a range of up to 200 km was built, and the MS-1 hydroplane no longer participated in the subsequent tests.

After several months of experiments, the crew managed to reduce the time for preparing the Cox-Clemin XS-2 seaplane to 15-20 minutes. 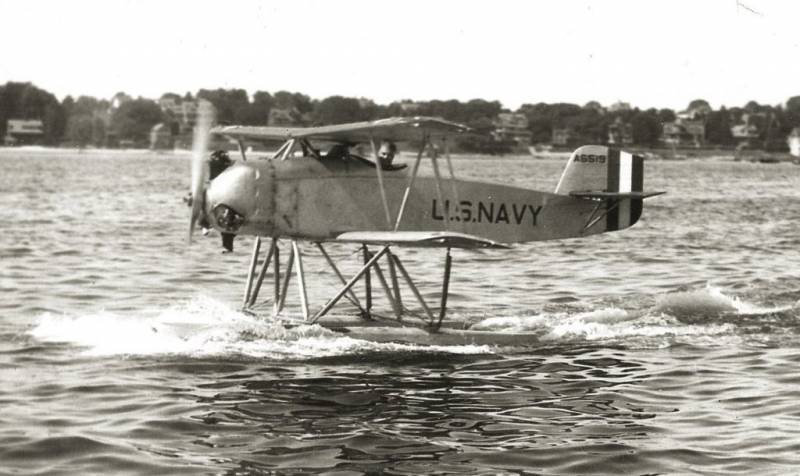 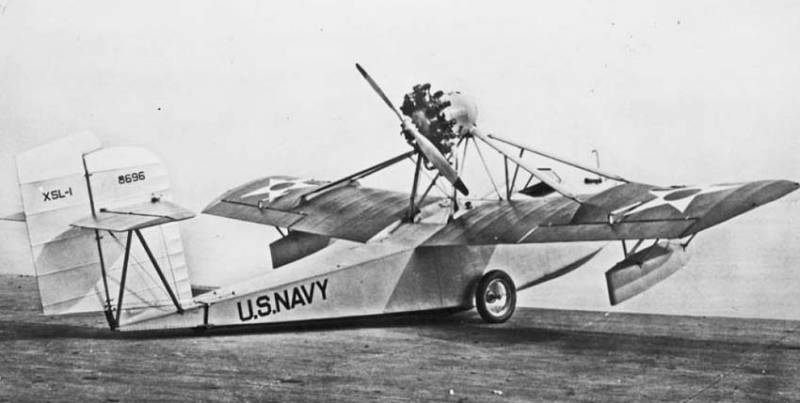 Modification "Loening" XSL-2 was equipped with a more powerful, 160-powerful engine. Her tests began at the beginning of 1933, but did not last long - during the next take-off the boat received serious damage and was refused from its restoration.

The US Navy continued to test the aircraft for a submarine before the start of the 1933 of the year, and then curtailed all the tests on this subject, citing the excessive danger for the crew and submarine crew (apparently considered the sad experience of the British submarine M-2).

In the year 1927 in Great Britain they returned to the idea of ​​using specially equipped submarines as carriers of aviation armament - seaplanes. For testing, the Admiralty allocated an underwater monitor M-2 with a displacement of 1650 tons, from which the 305-mm gun was dismantled, and a hangar for one hydroplane was equipped instead. To preserve the stability of the submarine, the hangar was made thin-walled, and the pressure of the outboard water during submersion was compensated by supercharging of compressed air. 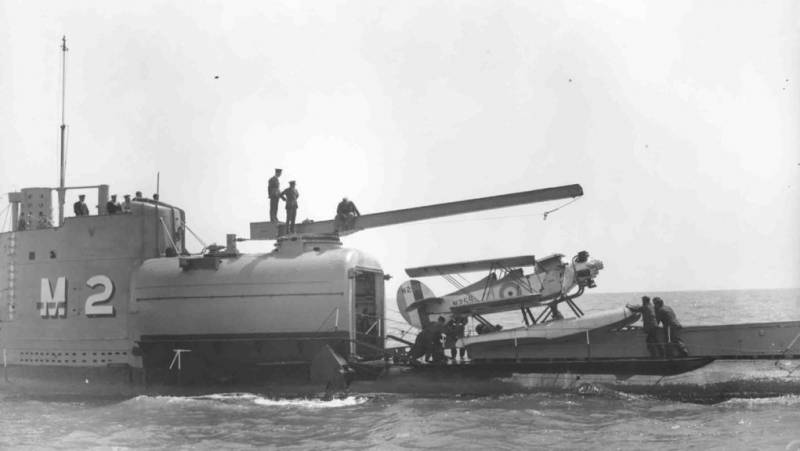 The special command of the submarine M-2 prepares the Pato seaplane for takeoff with the help of a catapult (the wings are still folded, the screw is not installed)

To launch the aircraft, placed on a special trolley, a catapult was used. The takeoff of the seaplane took place while the submarine was moving upwind. Driven after the flight, the seaplane was lifted aboard with a special crane. To reduce the time to prepare the aircraft for takeoff, part of the work was performed even when the boat was in a submerged position (refueling jet fuel and oil). 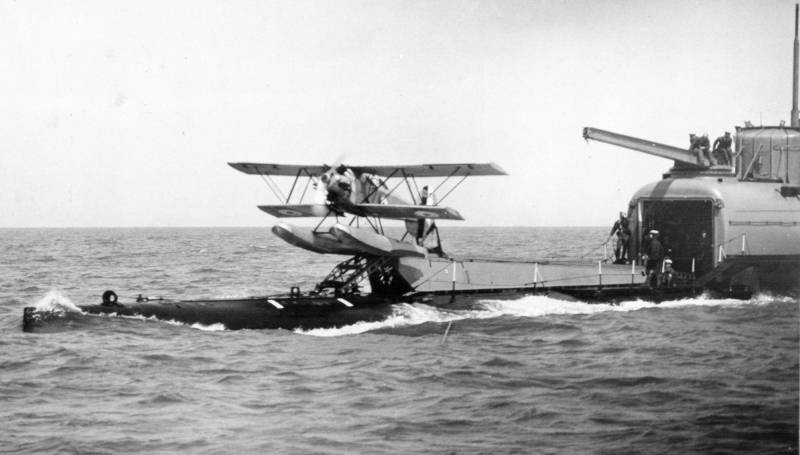 An admiralty was chosen to take part in the trials of the twin double-float biplane "Parnol" "Pato" of the company George Parnol (G.Parnall Aircraft Co). The Peto reconnaissance seaplane (Peto) equipped with an 170-strong engine developed a maximum speed of 185 km per hour and could be in the air for up to two hours. 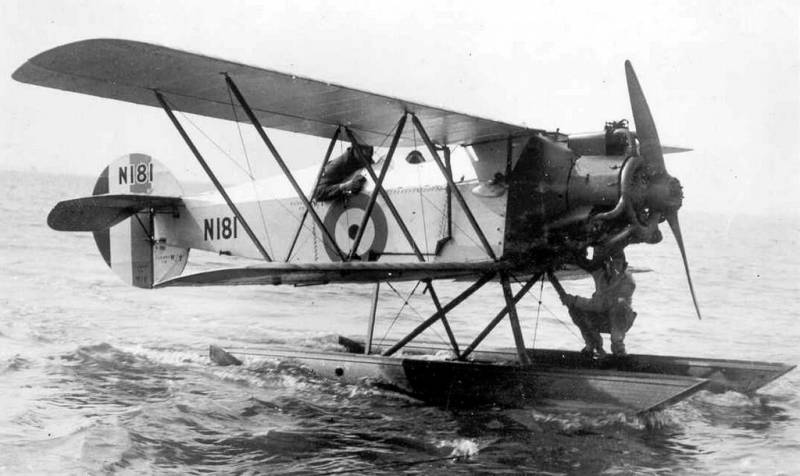 The test involved two prototypes, which differed from each other by the power plant. The seaplane was located in the hangar (7 meters in length, 3.5 meters in height and width) on the launching trolley and with folded wings, in addition to saving space, this significantly reduced the time to prepare the aircraft for departure. "Peto" had a solid structure and had excellent maneuverability while taxiing on the water. 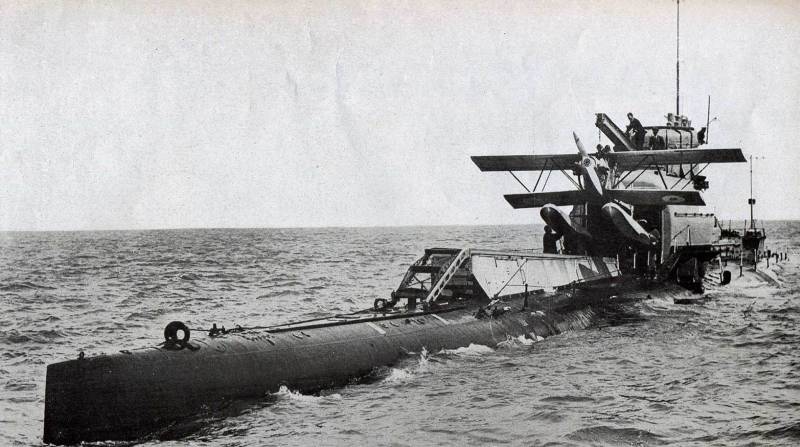 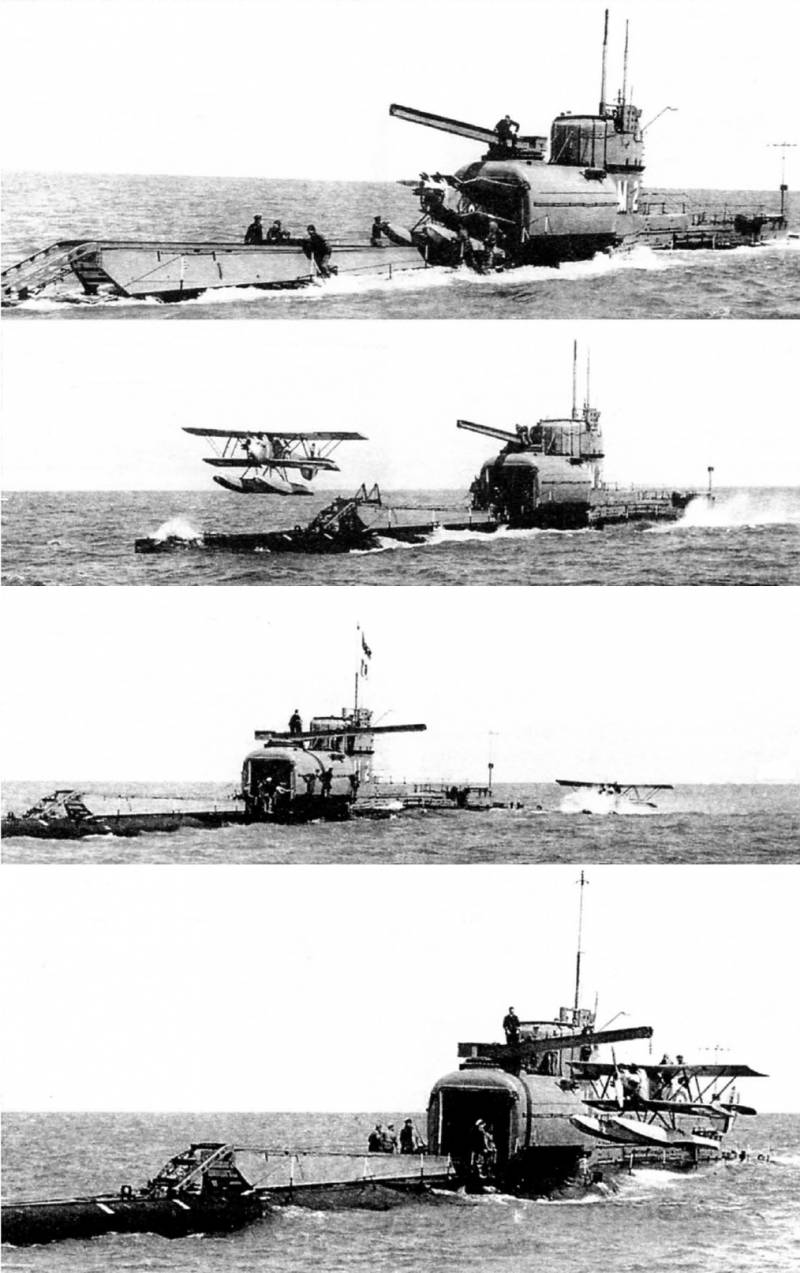 The sequence of flights of the Parnol reconnaissance aircraft Pito from the British submarine M-2 (preparing, taking off, landing on water and lifting the crane on board), 1928 – 1932 years

Experiments on the British aircraft carrier M-2 submarine with the Parnol reconnaissance seaplane “Peto” took place from 1928 to 1932 a year. 26 January 1932 of the year during the next dive in the English Channel M-2 sank at a depth of about 30 meters with all its crew of 60 people. Experts believe that the most likely cause of her death is an abnormal situation that led to the depressurization of the aircraft hangar. Indirectly, this is indicated by the open door of the hangar and the hatch from the robust hull of the boat to the hangar, which were discovered by divers during the February 3 dive. In the autumn of 1932, the British fleet attempted to raise the "submarine aircraft carrier", but the work was not successful, and it was decided to abandon further attempts.

Ctrl Enter
Noticed oshЫbku Highlight text and press. Ctrl + Enter
We are
Be-10: the world's first serial jet seaplaneAn-12 in Afghanistan
5 comments
Information
Dear reader, to leave comments on the publication, you must to register.