December 4 2017
26
A month ago, at the Alat station, which is 70 kilometers from the center of the Azerbaijani capital, the presidents of Azerbaijan and Turkey, Ilham Aliyev and Recep Erdogan, together with Georgian Prime Minister Georgi Kvirikashvili, launched the Baku-Tbilisi-Kars (BTK) railway line. There was, of course, a landmark event opening up new opportunities for people and companies of neighboring countries. This is their third major joint infrastructure project after the Baku-Tbilisi-Ceyhan oil pipeline and the Baku-Tbilisi-Erzurum gas pipeline. 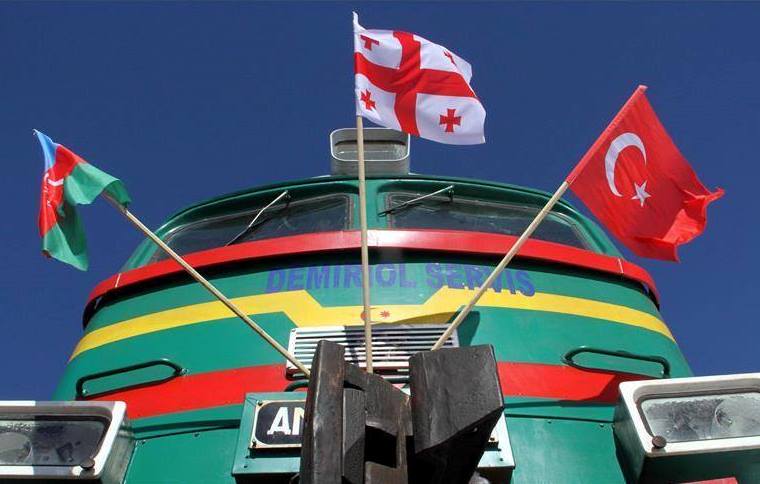 The first two projects were financed with the participation of large Western oil and gas companies and were accompanied by a great propaganda rhetoric about “new perspectives of Europe, getting rid of hydrocarbon dependence on Russia”. This flow of Azerbaijan was actively picked up by Western media. For Russian companies, they painted the darkest prospects, for European consumers - a real energy paradise.

Time put everything in its place. As it turned out, the resource base of Azerbaijan does not allow it to oust the Russian Gazprom from southern Europe. Now, two branches of the new gas pipeline stretch across the Black Sea from Russia to Turkey, each of which exceeds the Baku-Tbilisi-Erzurum gas pipeline, advertised in every way.

Similar история It happened with the construction of the railway. She immediately began to position as the main direction of the “New Silk Road” from China to Europe. It seemed so. Kazakhstan accepts Chinese goods at the border in the new railway terminal of the so-called “dry port” Khorgos. Holds them through its territory. Then he transports ferry to Baku.

Further cargoes follow the new route through Georgia to Turkey. Then - on the already existing railways - to Europe. The propagandists of this idea did not bother at all that Beijing completely refused to participate in any form in the construction of a railway from Azerbaijan to Turkey.

The project was not set from the very beginning. He was not financed by US and EU companies. Azerbaijan had to take the burden of construction of the highway. He spent over a billion dollars on a new 105-kilometer branch from Georgian Akhalkalaki to Kars and partially modernizing the domestic railway networks. Out in less than ten years. Although the plan for the implementation of the project allotted four years.

China has not sent a representative to the opening ceremony of the highway. The company to the triumphant owners of the road was made only by the prime ministers of Kazakhstan and Uzbekistan - Bakytzhan Sagintayev and Abdulla Aripov. Their participation reflected the interest of the countries of Central Asia in the transportation of their own goods to Turkey along a new route.

President Aliyev did not fail to take advantage of this. At the ceremony, he called the Baku-Tbilisi-Kars road "the shortest and most reliable connection between Asia and Europe." Strictly speaking, the distance from the final destination of the highway - East Turkish Kars - to Europe is one and a half times longer than actually to Baku (826 kilometers from Baku versus 1428 from Kars to Istanbul). But very few people paid attention to this detail.

Moreover, Aliyev was played up by the European Commission. She sent her greetings to the participants of the celebrations on the occasion of the completion of the construction of the highway, in which she noted that the opening of the new message is “a big step in the transport connection of the European Union, Turkey, Georgia, Azerbaijan and Central Asia.”

What did the first BTK freight train show?

After the celebrations in Alyat, a month passed. During this time, only one freight train passed through the BTK highway. From Kazakhstani Kokshetau in the Turkish port of Mersin arrived composition with 30 grain containers. On 5435 kilometers he spent 10 days. Usually, grain is shipped in special bulk wagons. For the passage of wheat on the BTK had to use railway containers.

The fact is that on the road from Kokshetau to Mesin it is necessary to overcome the Caspian Sea. There is a ferry crossing between the Kazakh port of Kuryk and the Azerbaijani Alat. Much has been written about her as about the weakest link in the proposed “New Silk Road”. First, because in ports only container handling. Secondly, its capabilities do not correspond to the volume of goods from China.

China, as we remember, is keeping to the new highway. (Which does not prevent Western media from speculating on the geopolitical weakening of Russia due to the new transport corridor). The Kazakhs dragged their grain to the overseas port at an 22 pace per kilometer per hour. In Mersin, the line-up was filled with Turkish cargo and sent back with speeches and ovations in a solemn atmosphere.

So two beneficiaries of the new highway - Kazakhstan and Turkey - appeared. In the absence of their own cargo traffic, Azerbaijan and Georgia continue to advertise their transit potential. Last week, another “New Silk Road” forum was held in Tbilisi, at which Prime Minister Giorgi Kvirikashvili boasted that an alternative round of Russia had now appeared.

The Georgian prime minister modestly remarked that in the time they were busy with the Kazakhstan train, about five thousand Chinese containers passed through Russia. Moreover, the cost of transporting one such container from Zabaikalsk to St. Petersburg is comparable to the cost of one transshipment through the ferry in the Caspian.

Experts behind all this ceremonial rhetoric do not see a detailed analysis of the economic viability of the new transport corridor. While in the course only common numbers. Western mass media, referring to representatives of the BTK member countries, argue that “if the line is fully operational in the early years, BTK will be able to transport more than 6 tons of cargo and 1 million passengers, and in 20 years - 17 million tons of cargo and 3 million passengers ".

With passengers, as they say, still "the trailer is not touched." Transport Minister Ahmed Arslan said that the first passenger train in the BTK will be sent no earlier than the second half of 2018. This topic is on the agenda. However, the main purpose of the new highway was still a more convenient and profitable route for the delivery of commodity cargo.

Kazakhstani staff showed significant technical problems of the highway. First of all, this is the known difference between the European railway track and the old Soviet one, established in modern Transcaucasia. These two types of rails converge at the Georgian Akhalkalaki station.

According to observers, the local railway workers spent too much time replacing the wheeled carts. This situation is unlikely to improve drastically in the future. And the point here is not only in staff development. The BTK infrastructure itself is not ready for the volumes that the Transcaucasian politicians, passionate about the process, are painting to society today.

According to Paata Tsagareishvili, director of the Center for the Study of the Transport Corridor (there is now such), it is necessary to create storage, packing and sorting facilities along the highway. Rolling stock must be provided with special cars for transportation of grain, millet, cotton, liquefied gas, etc. Finally, the road should be electrified on the Turkish side. This is the second after the ferry crossing “a narrow link of the main line”, which sharply reduces the speed of cargo movement.

It is clear that the solution of these issues requires additional funding. For what it is necessary to solve a simple “task of the first level” - to sign contracts for the transportation of goods and develop a uniform tariff policy. Only four countries joined this process - Kazakhstan, Azerbaijan, Turkey and Georgia. The rest are waiting for the appetites of the owners of BTK to match their interests and opportunities. And not only!

Georgian politicians and experts for this month have repeatedly stressed the priority of the political significance of the new highway over the economic. This, for example, in an interview with Voice of America, was explicitly stated by the vice-president of the Atlantic Council of Georgia, Batu Kutelia. He noted that “from a strategic point of view, the significance of the Baku-Tbilisi-Kars project may to some extent exceed its economic importance.”

It seems that not all potential partners of the owners of BTK are ready to share with them their geopolitical goals. And the economic success of the new highway directly depends on this. Meanwhile, Kazakhstan exporters are preparing a second train with grain for shipment to Turkey. Other shippers have not filed an application for BTK yet.

Ctrl Enter
Noticed oshЫbku Highlight text and press. Ctrl + Enter
We are
The position of the BTK Group regarding publication in the Izvestia newspaper. False information must be refuted"BTK Group" is included in the register of organizations of the military-industrial complex
Military Reviewin Yandex News
Military Reviewin Google News
26 comments
Information
Dear reader, to leave comments on the publication, you must to register.