Weekend reading. A country without an army and a capital, but with a growing number of refugees

December 3 2017
33
In December of this year, the 30 anniversary of the beginning of the diplomatic relations of one of the smallest countries in the world with the largest state of the planet - Nauru with the Soviet Union is celebrated. On the tiny state of Nauru, located in the Pacific Ocean, and will be discussed in the next small publication from the series: "Weekend Pulp Fiction". 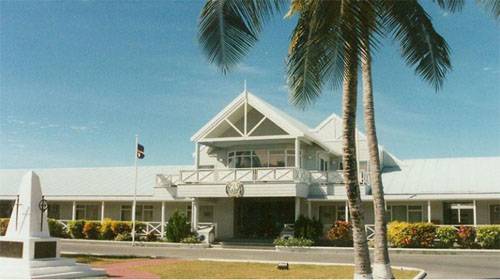 The state of Nauru in our country is well known, except for the fact of recognition of the independence of Abkhazia and South Ossetia. Indeed, the leadership of Nauru decided to recognize the independence of these two republics - but not immediately after the proclamation of sovereignty by Sukhum and Tskhinval, but only two years later. One of the reasons for the interest in the fate of South Ossetia and Abkhazia by the state, located thousands of kilometers from them, was Russia's financial and economic assistance.

As you know, Russia is a generous soul, and at the peak of the global economic crisis, which reached Nauru too, Moscow allocated about $ 50 million to the state in Oceania. Officially - in the form of a low interest loan. If we consider that the population of the Republic of Nauru is about 10 thousand people, and GDP is 60 million dollars, it turns out that Russia financed this state at the level of 83 with more than a percent of its GDP.

The allocation of funds took place in 2009, and after a few months, the official authorities of Nauru decided to recognize the RSO and the Republic of Abkhazia as independent states.

Nauru is an unusual state. One of its features is that the state has no official capital. And there are no cities either, in the generally accepted sense of the word. The largest settlement of the country in which the authorities meet is Yaren - a semi-city semi-settlement with a population of about 750 people and an international airport with flights mainly to Australia.

If we talk about the military sites of Nauru, then there is actually no Nauru military facilities. On a tiny island of about 21 square. km from military facilities there are bunkers that appeared here during the Second World War. Their creators were Japanese soldiers who were able to get to this coral island, lost in the middle of the Pacific Ocean.

In spite of the fact that in 10 the thousandth of Nauru, it would seem, all are relatives of each other, sometimes serious political passions are boiling in the country. In the 2014 year, several months after the election of Baron Divavesi Vaca as the new president of the country, the local parliament prepared a law on impeachment for him. However, an impeachment attempt for the president’s opponents failed. 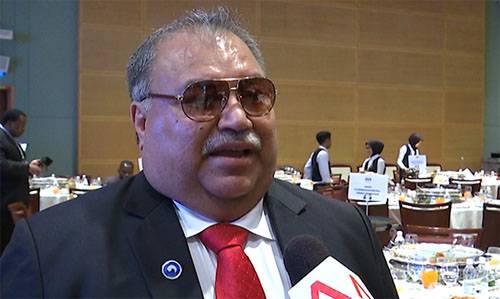 Nauru, like President Baron Vaca, is positioning itself as an active participant in the international process. The largest number of meetings - with representatives of the Australian leadership.

However, the president often meets with leaders of countries in completely different regions. On the frame - the meeting of the leader of Nauru with the Israeli prime minister: 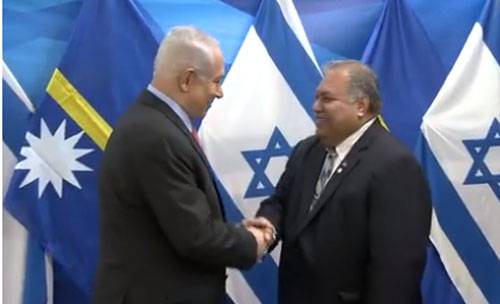 The reason for the frequent meetings of Baron Vac with the leadership of Australia is that the official Canberra financially supports Nauru by organizing a refugee maintenance center there. This is exactly историяwhen the United States demanded that Australia desist from refusing to accept refugees. On the 10-thousandth (by population) state of Nauru accounts for more than 400 refugees, which Australia "strongly recommends" not to send on its territory. It is known that in Nauru 29 million dollars were requested monthly from Australia for "working with refugees" - almost half of the annual GDP. Australia agreed ...

President Nauru:
Yes, in our country there is a certain discontent with the presence of refugees. But at the same time, we remember that our country has always been famous for its hospitality. 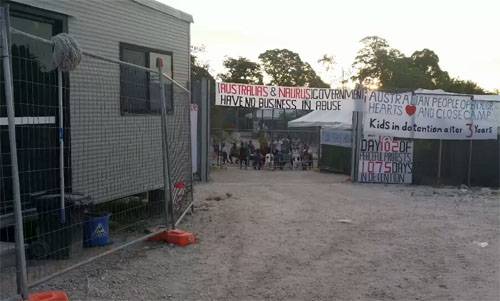 In the refugee camp

Due to the presence of refugees in the country, the first of which by hook or by crook managed to get to Nauru in 2013 year, the government of the republic thought about increasing the number of law enforcement agencies and militarized guards. The fact is that refugees (mainly from Papua New Guinea) are increasingly complaining that they are not sent to Australia, but are kept behind bars on a tiny island in the middle of the ocean. Against this background, Australia declares that it is responsible for the safety of Nauru. At present there is no official agreement on power assistance between the states. The number of officially registered refugees in Nauru, according to the latest data, in 2018 could reach 2% of the local population.