With censorship - "Cranes are flying", uncensored - Khan transvestite. Where has the “most important of the arts” gone?

December 4 2017
155
There are films that can be reviewed half a dozen times and each time you watch it, find something new, important, or, to put it simply, catchy. There are antipodes from the pantries of the film industry, which, having looked and once, catch the basic idea, the main, so to speak, vector - once and for all captured - is reinforced concrete. - To revise not that there is no desire - everything is just done so neatly, aesthetically, unequivocally that the revision is unlikely to add new emotions, since the received emotions were already beyond the limits of the first viewing. 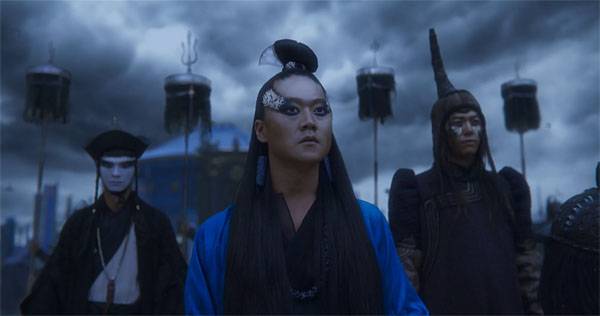 Both the first and the second version of the national cinema without any additions can be attributed to the real intangible values, the cultural heritage of not only our country, but the whole (without exaggeration) of humanity.

Recently, however, one has to face a new phenomenon: there seems to be a professional director, there are no less professional actors, there are hundreds or another of budget millions, there is a dedicated film project, and ultimately the pancake is lumpy. And the first pancake - it's okay, but the second, and the third, and the twentieth.

There are many things in the films - dozens of plans - from above, from below, from the side and even almost from the inside of actors, flying cameras, white-toothed smiles of the art community, there are expensive costumes, incredible make-up, a lot of special effects, advertising on federal channels, the largest radio stations, advertising is full of sites , including the main pages of search engines. There is a lot, but when an average person buys a ticket and sits in a cinema chair, the film ultimately reduces to the thought: wasn’t it better to spend these two hours somewhere else - at least in the garage; or: if half a billion is spent on it, then how much does the film crew need for it to shoot something distinct ... And then the child is interested in: is the khan the uncle or the aunt? ..

Aesthetes from the world of cinema often answer the average viewer: if there is no aesthetic vein, then even a piggy-eyed nech poke a screen; they say, there are real experts in business who will appreciate the creation of this director. But this should happen - and the real experts in the case, after watching a whole series of modern “filmmaking”, shrug their shoulders and ask: friends, what was it?
Actor, director, teacher Ivan Didenko in his author's program “Director's analysis” distributed the nuts to the creators of the film “The Legend of Kolovrat” - a film with a claim to some historical the rationale - well, now "cut into history" has become fashionable. Ivan sincerely wonders what it was necessary to eat (or smoke ...) in order to present Batu Khan as a freak from a transvestite show (whoever watched the film (well, at least the trailer) will understand what this is about). In the film with budgets of 360 million rubles, “one handsome young man Kolovrat is fighting with another handsome young man Batu”.

Ivan Didenko:
I have a question: who selected them for the leading roles? You did everything badly: you built a stupid pavilion. The feeling is that you are shooting in a box with an old searchlight. You have a script - complete garbage, sucked from the finger. So you also took some strange people to the main roles. And there is no artist fault. They paint - in what circumstances they put, in such and will work. Artists are more experienced to somehow try to portray cold and tired, and artists with less experience are looking for less.


But, by and large, it is not even about who was chosen for the main roles, which box was turned into a pavilion, which searchlight was directed in what direction. The point is in general principle, which has become characteristic of recent years. And this is the principle of uncontrolled vacuity - especially for consumer society - under the chips and popcorn.

In 90, there were excuses about what, they say, there were no means - and therefore the films were either not filmed at all, or for some monetary crumbs they had to turn around to get a more or less digestible product. But why "excuses"? - funds really was not, and not only in the cinema.

Today, cash in the film invested frankly considerable. Reaches billions in investments. And what, so to speak, at the exit? Is there at all today a group of responsible people in a country that is ready to inquire, if only for decency, how many millions were spent on the “hubnushka” and eyeliner for “Khan Batyi”, how many were spent on dirt and manure in the film “Viking”, as well as other similar elements in these and other "historic-fabulous" films? By the way, now it has become fashionable and convenient for directors to declare: we, they say, are shooting not a historical film, but a "fantasy story", and therefore "it is not the historical details that are important, but the spiritual organization of the heroes." Indeed, it is convenient - after that you can send the same Batu, even in jeans with rhinestones to Ryazan. Well, fantasy, fairy tale ...

It’s only for these fantasies that money is allocated not only from the pocket of specific production centers previously earned by these production centers and no one else. If we return to the same “Kolovrat”, then it was created by the film company “Central Partnership”, which in turn (from 2014 year) is part of Gazprom-Media Holding. Well, the one that contains “Echo of Moscow” and one well-known serial studio, a well-known actress, attracted by which recently announced that the power is shit, it's time to take to the streets and, at least, support Navalny. And so that Gazprom is not quite private, or rather, not private at all, hardly anyone has forgotten. And the authors of the text for the now well-known schoolgirl in the whole country have not forgotten either ...

That is, the state has funds for the film industry. These funds in considerable amounts (including through companies with active state participation) for certain projects are allocated. And so on - even though the grass does not grow. Only after the billions have been mastered, all of a sudden questions are revealed: were there transgender people in the Horde too? Viking and Varyag - is it really the same thing? How many German women raped Russian prince? ..

And the questions of public financiers are found out, interestingly? Or does the state seriously fear that Western partners and parochial liberals will accuse him of censorship? Sorry, but doesn’t the government have the right to ask for its own money? In the end, state funds - these are taxpayers' funds - do we not have the right to ask either? ..

There is no talk about total, ideological censorship. But the fact that it often comes out on screens today really suggests - it would be better with censorship ... In fact, if you list all the ingenious things that came out in our country with centralized censoring, then such an idea would no longer be felt idle. Well, where is marasmus - “Brezhnev” views before the mass hire or today's “kolovrats” with pomada not only villagers, but also Mongolian leaders ...

By the way, we are still wondering how this is so: the leading Western media manage to confuse Kiev with Ulan Bator on the map, and the presidents of Slovenia are called Slovakia. Judging by the trend, we still have everything ahead ...

Author:
Alexei Volodin
Photos used:
shot from the movie "The Legend of Kolovrat"

Ctrl Enter
Noticed oshЫbku Highlight text and press. Ctrl + Enter
We are
Reports from the militia of New Russia for 27-28 September 2014 of the yearResults of the week. "Well, do not change me because of every idiot!"
155 comments
Information
Dear reader, to leave comments on the publication, you must to register.