December 6 2017
8
After the construction of “Moscow” and “Leningrad” - two anti-submarine cruisers of the 1123 project, the cipher “Condor” - in February of 1968, another ship was planned to be laid out using the improved 1123.3 design with enhanced anti-aircraft weapons, improved seaworthiness and greater displacement. However, in the future, the number of proposed changes has increased so much that it was decided to abandon the laying of the third cruiser, which was to be assigned the name "Kiev", in favor of creating a ship under the new project - 1143 "Krechet". 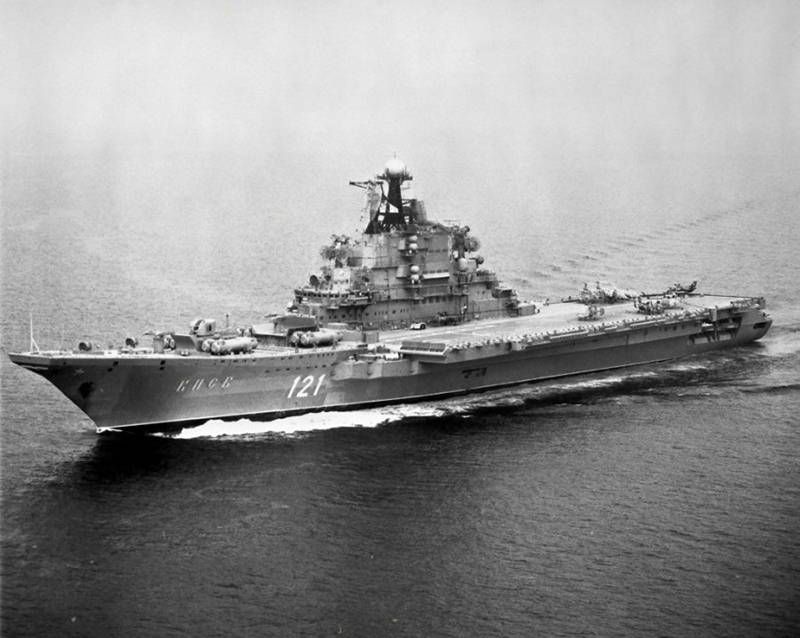 The appearance of the first Soviet vertical take-off and landing aircraft (VTOL), first publicly demonstrated on July 9 of the year 1967, at the air parade in Domodedovo played a significant role in this decision. In contrast to the command of the Air Force, rather reluctantly related to the new product because of the very limited payload, the Yak-36 interested the sailors. Admiral Sergei Gorshkov, commander-in-chief of the USSR Navy, proposed to the Ministry of Shipbuilding Industry to develop a project for the joint basing of aircraft (VTOL) and Ka-25 helicopters. Its development was entrusted to the Nevsky TsKB.

In 1968, the design bureau was supposed to give a preliminary design to the surface, and in 1969, a technical design. In April, 1970 project was approved by the command of the Navy. The future cruiser, armed with, among other things, a joint air group of K-25 helicopters and VTOL aircraft, was also supposed to carry the B-500 Bazalt anti-ship missile system. Its displacement reached 29 thousand tons.

21 July The 1970 cruiser, which taught the name "Kiev", was laid on the stocks No. XXUMX at the Black Sea shipbuilding plant in Nikolaev. The ship, despite all the experience of the plant in the construction of "Moscow" and "Leningrad", turned out to be difficult to build. Large asymmetric dimensions of the ship in width, shifted to the starboard side of the superstructure, and the saturation with complex armaments and equipment created difficulties in the operation of the plant. Required special measures to ensure the construction of the cruiser.

For transportation to the building berth, where the construction of large-sized and heavy blocks and sections took place, it was planned to purchase two highway trailers with a loading capacity of 200 – 300 tons. Subsequently, these cars were purchased in Germany. Factory workers called them "centipedes" because of the presence of numerous axes. In the 90 - 2000 - s, these unique vehicles were rendered unusable.

In addition to acquiring auto trailers, other issues related to the reconstruction and improvement of the ship assembly process were also resolved during the construction of the head heavy aircraft carrier “Kiev”. Several new workshops were built, among them a new assembly and welding workshop. A huge amount of counterparty work - in creating new for the Soviet fleet almost the entire Soviet Union took part in the ship - pushed to the decision to build a special workshop for them. In this room, pre-installation training of mechanisms, special devices and instrumentation was carried out.

On the slipway, where the construction of "Kiev" took place, two tower cranes were replaced - their payload in 20 tons was already clearly insufficient. When building heavy aircraft-carrying cruisers, the method of forming hulls from large-sized blocks and sections began to be introduced, and new equipment was needed to work with them. The plant management began to work out the issue of acquiring two powerful 300 – 500 gantry cranes each, which were to be installed on the stocks No. XXUMX.

In general, the plant underwent a qualitative modernization for new tasks. It continued in stages all 70 and the beginning of 80. At the time of the laying of “Kiev”, the Black Sea Shipbuilding Plant was one of the largest specialized enterprises in the USSR - there were more than 25 thousand people working in the plant.

“Kiev”, or the order 101 was laid 21 July 1970, the day of the Navy. The bottom sections in the area of ​​the main power plants were taken as mortgages - a silver mortgage board with the name of the cruiser was fixed there. “Kiev” was built on the largest inclined slipway in Europe, No.0, which was built at the end of the 1930s. for the construction of battleships of the "Soviet Union" type. The sequence number “0” was assigned to the building berth because its location was next to the largest building berth, “1”, but to the side opposite to the other building berths with the sequence numbers “2” and “3”. 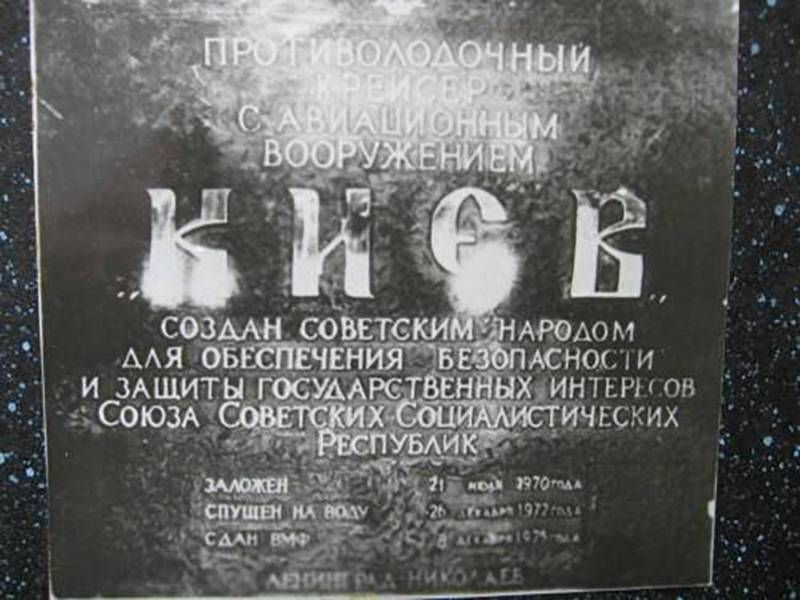 The cruiser "Kiev" during construction was divided into 10 construction areas, starting with 1, the mortgage. Staging assembly and welding was carried out by the pyramidal method of pre-assembled and welded on the near-stack platform sections. Their weight did not exceed 75 tons - such was the load capacity of the slipways available at that time. On average, more than one and a half thousand factory workers worked on the 101 order every day, not counting several hundred travelers.

To reduce the construction period of the building, the plant specialists and representatives of other enterprises, in particular, the Kirov Turbine Plant, decided to install the Main turbo-gear units on the ship foundations even before the end of the ship's aft end formation. 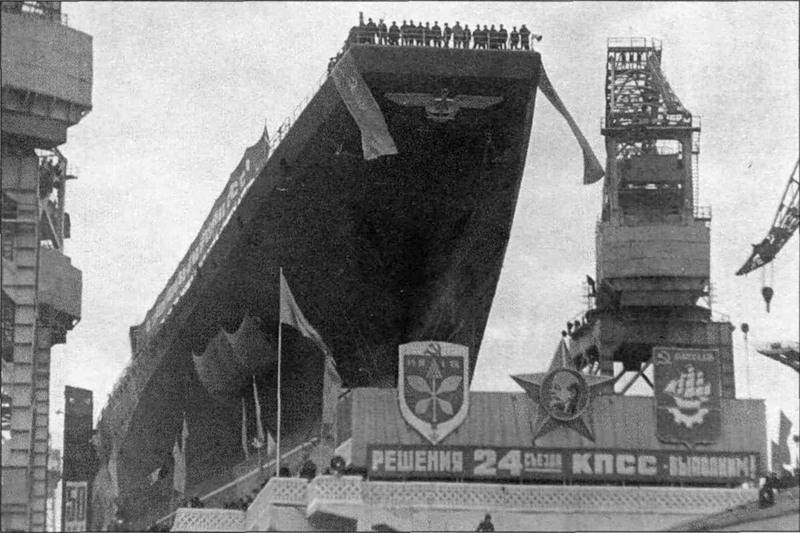 "Kiev" on the zero stocks

26 December 1972. The anti-submarine cruiser Kiev was launched into the extension wall of the plant to continue construction. Simultaneously with the completion of the ship, comprehensive tests and experiments were carried out on its aircraft armament. The Black Sea Shipyard produced a full-size model of the ship’s compartment with a section of the flight deck. The model, actually a test stand, was installed at the Flight Research Institute in the city of Zhukovsky, it took off and landing aircraft Yak-36M. These experiments revealed a number of design flaws, in particular the thermal coating of the structure. It has been modified. Subsequently, the deck of "Kiev" was covered with special heat-resistant plates AK-9F size 500 × 500 mm in the amount of more than 15 thousand. 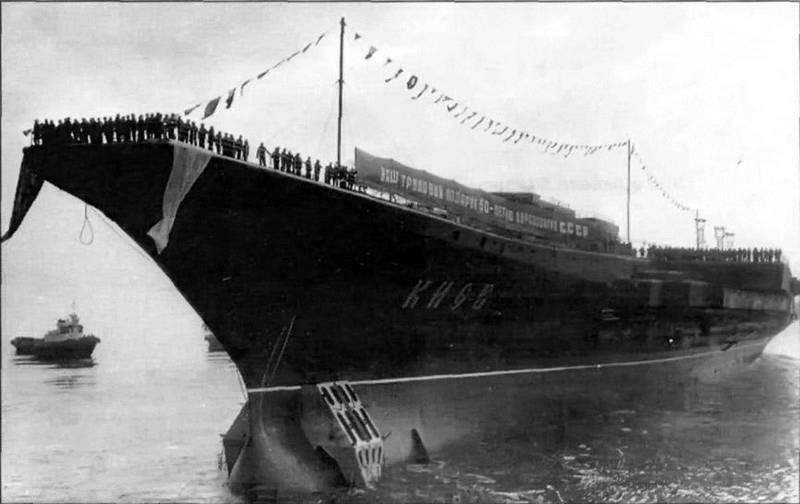 The cruiser "Kiev" is launched

In July, 1974 began the mooring tests of individual systems: fire-fighting, the mechanisms of the main power plants. October 1974 - April 1975 complex mooring trials of the entire ship were carried out. Its construction is finally completed.

15 April 1975 The naval flag of the USSR was hoisted above the cruiser, although it was not formally accepted into the fleet. On April 17, after a solemn meeting, attended by Fleet Admiral Sergei Gorshkov, the “Kiev”, fell off from the factory pier and was accompanied by tugboats, went down the Southern Bug. His path lay in Sevastopol for the full cycle of sea trials. A curious detail was the fact that the number of the ship "852" was applied not on board the cruiser, as was customary in the fleet, but on the superstructure. Subsequently, the tail number was transferred to its usual place.

The 18 of May 1975 on the Belbek raid near Sevastopol, test pilot Oleg Grigorievich Kononenko first landed the Yak-36М aircraft on the cruiser deck. In the autumn of the same year, the formation of the first stories Navy of the USSR ship regiment, which was to consist of one squadron of VTOL aircraft and two squadrons of anti-submarine helicopters Ka-25 PLO (hereinafter Ka-27).

The first stage of cruiser testing ended by December 1975 of the year. Its construction continued for 5 years 5 months and 5 days. The newest "Kiev" was planned to join the Northern Fleet. In the spring of 1976, preparations began for the transfer of the ship to its permanent base in Severomorsk. 16 July 1976 “Kiev” left Sevastopol and set off on its first hike around Europe.

Aviation and NATO ships experienced genuine and constant interest in the newest Soviet ship. In the Atlantic, the planes of the future Western “partners” became so frequent guests over the cruiser’s deck that they interfered with take-off and landing activities (“Kiev” had five Yak-36Ms on board). The “guests”, whose obsession was already becoming rather annoying, did not react to all warning signals. When all the immense resources of Russian patience were exhausted, the Yak-36M took off and simulated an air attack on an obsessive patrol aircraft of the Bundesmarine of the Navy of the Federal Republic of Germany. The air over Kiev became noticeably cleaner - often in dialogs with such "partners" the use of aviation is much more effective than a delegation. 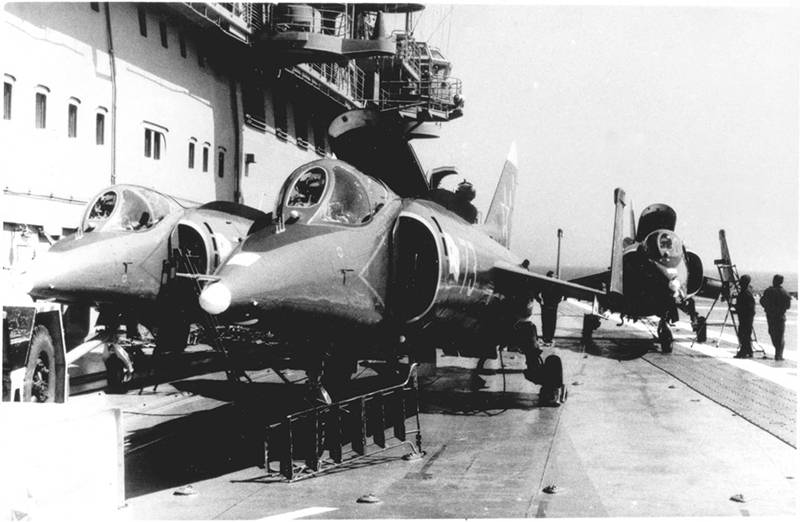 Yak-38 attack aircraft on the deck of the Kiev "TAKR"

In August, 1976, Kiev, arrived in Severomorsk. In the autumn of the same year, VTOL aircraft were officially put into service under the designation Yak-38. In the north, the cruiser went through the second stage of state tests - the acceptance act was signed on December 3 1976, and adopted in February 1977. This rather lengthy process of building and finishing was caused primarily by an abundance of new equipment and lack of experience.

The 1143 lead ship service was intense and intense. He regularly made military trips to the Atlantic and the Mediterranean. In 1977, Kiev was reclassified into a heavy aircraft carrying cruiser. By the fall of 1982, when Kiev arrived at the Black Sea Plant for medium repair and modernization, the cruiser had 7 combat services in the Atlantic and the Mediterranean, during which numerous tasks were worked out, participation in the North-77, Razbeg -79 "," West-81 ". In the latter, more than 100 warships, among other things, took part, and Kiev had the honor of being the flagship. 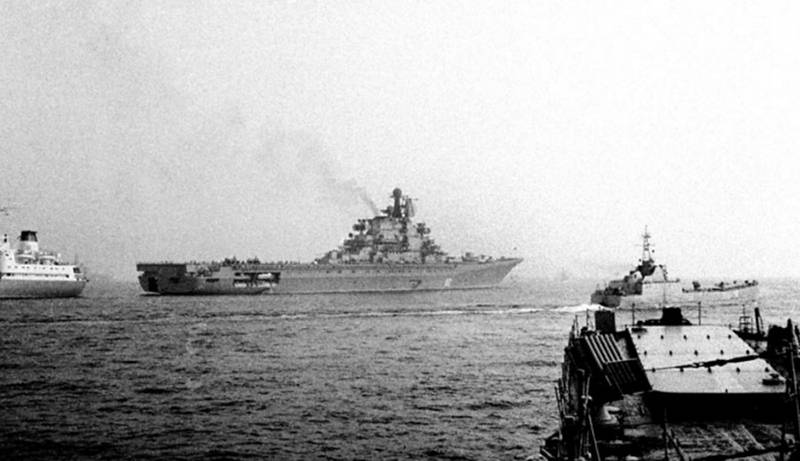 It was possible for the cruiser to be imprinted in the cinema: he was involved in the shooting of the film “The Case in the 36-80 Square”. After completing the repair and modernization, which was completed two years later - by November 1 1984, the cruiser service continued. 6 June 1985 Admiral Vladimir Chernavin, Chief of the Main Staff of the USSR Navy, presented the Red Banner Flag and the Order of the Red Star to the crew of Kiev. In 1987, the heavy aircraft-carrying cruiser completed its last, tenth, combat service in the Mediterranean. 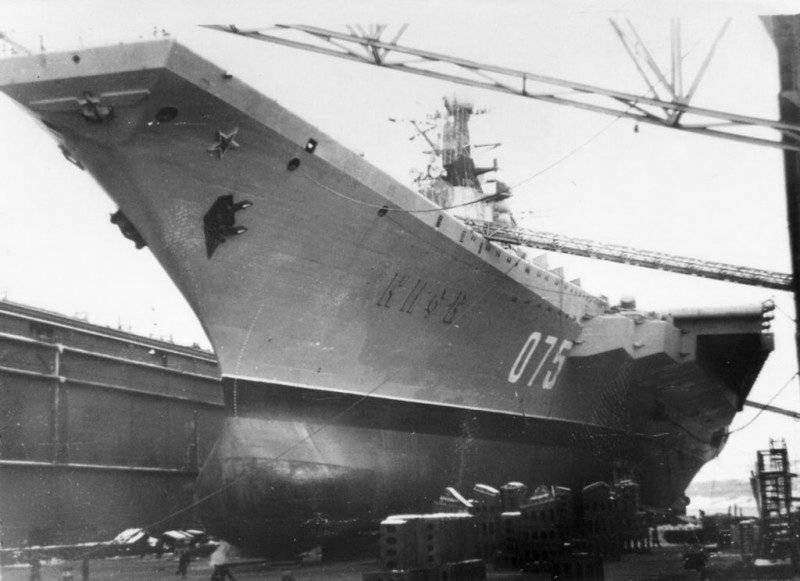 "Kiev" in the repair of growth, Murmansk

In 1990, the ship was delivered to the navigation repair of the Sevmorput enterprise. From August 1991, he was withdrawn from the forces of constant readiness. The intensive service led to the need for a comprehensive, non-cosmetic repair, which could only be carried out by the manufacturer - ChSZ. But the cradle of the aircraft carrier of the domestic fleet suddenly found itself on the territory of the independent state of Ukraine. There were no means and means to support life in “Kiev” - he no longer went to sea and in June 1993 was expelled from the naval forces by an order of the fleet commander. 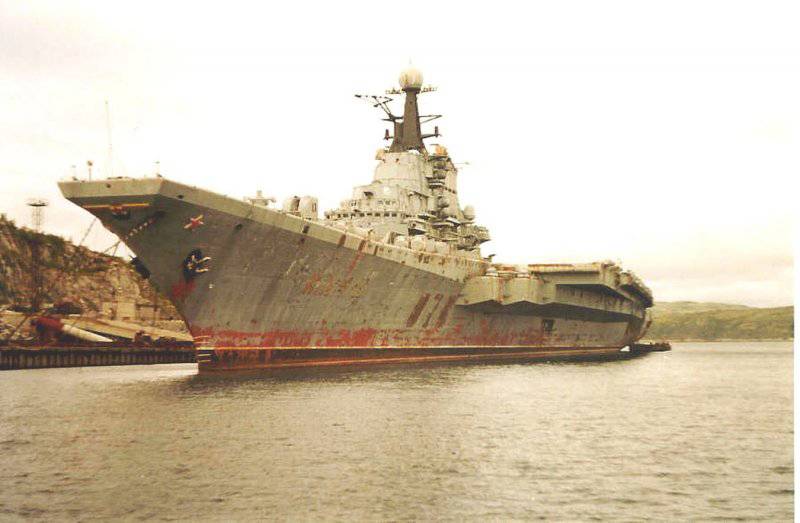 In August of the same year, the ship’s flag — by that time, not the Red Banner, but Andreevsky — was lowered. "Kiev" was disarmed and waited for the destiny of the future, which is the same for all decommissioned ships - a shipyard cemetery and gas cutters. However, the circumstances were different. In 2000, the TAKR was towed to Shanghai. It was acquired by a private Chinese company at the price of scrap metal. In Shanghai, “Kiev” was re-equipped into a floating entertainment center with a large museum exhibition, including full-size models of combat aircraft and helicopters displayed on deck. Part of the interior was combined for more space. 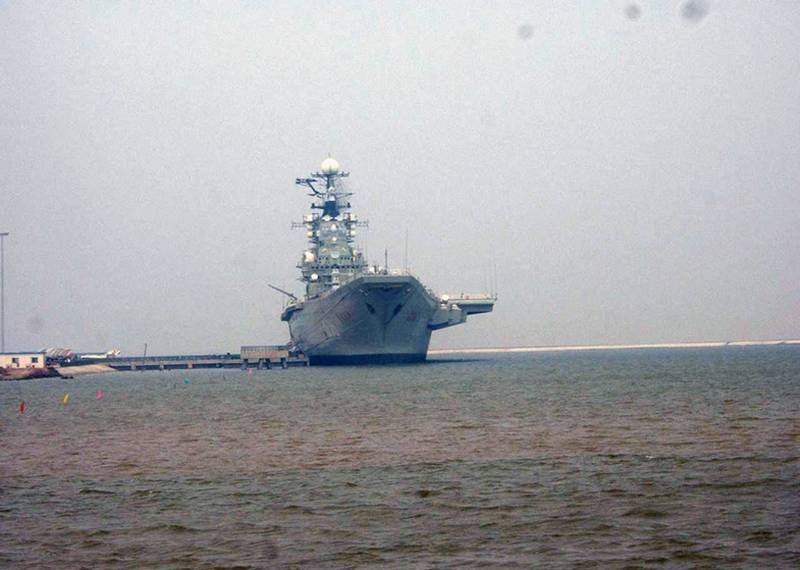 In 2003, the cruiser was towed to Tianjin, where he stood at his permanent parking near the amusement park. In 2011, Chinese businessmen transformed the fiction into a floating hotel while preserving its museum display. The former TAKR “Kiev” is still in this status, being not only a center of leisure and tourism, but also a peculiar monument of military and technical power, which the Soviet Union once had.