December 7 2017
32
News About the HPV program 2018-2027 leave a very ambivalent impression. On the one hand, there is a feeling that the state armaments program for the next 10 years has become much more realistic than the HPN 2011-2020. On the other hand, significantly less funds were allocated for it than was planned to spend on the state armaments program in the 2011-2020 year, and this is certainly very disappointing.


So, in the article “The new state armament program gives an idea of ​​Russia's military priorities” (rsnews.ru):

“At first it was planned that this program would be valid until the 2025 year. However, it was quite unexpectedly extended to 2027 of the year, highlighting 19 trillions of rubles for its implementation. (This is roughly 244 billion pounds). Adjusted for inflation, this figure is close to the amounts that are allocated under the current program, calculated on 2012-2020 years. "

The following statement is surprising in this statement: there is not a word of lies in it, but at the same time it forms the reader a wrong impression about the financing of the new state armaments program. One gets the feeling that we have smoothly transferred one program to another and, without reducing the size of financing, we are heading towards a bright and well-protected future. But is it?

In fact, the numbers 20 trillion. rub. HPV 2011-2020 and 19 trillion rub. completely incomparable to each other. This is due to inflation - every year it depreciates money, because the same product due to rising prices begins to cost more. Accordingly, 20 trillion rubles, which were planned to spend in 2011-2020, cost much more than 19 trillion. rubles planned for 2018-2027

In order to deal with what is happening with the financing of our military programs, let us try to find out first how much money we have already spent on implementing the LG 2011-2020 and spend it before the start of 2018. Unfortunately, in open sources it is not so easy to detect the amount of actual financing for the HPN 2011-2020 during the 2011-2017 years. It was possible to find data from the Center for Analysis of Strategies and Technologies, which indicated the planned figures for procurement expenditures and R & D in 2011-2015. They look like this:

Strictly speaking, such a distribution of funding was one of the reasons for the criticism of the LG 2011-2020: it was reproached for its impracticability precisely because it was planned to spend the bulk of the funds at the end of the program. And indeed, if we assume that in the future, in 2016-2020, it was planned to retain approximately the same proportion of cost increases, then in 2016-2017. 2,5 should have already been sent to perform HPW by bln. rub. annually, but even in this case, almost half of all planned expenses (about 9,5 trillion rubles) accounted for the last three years, 2018-2020. In order for the state to afford it, it was necessary either to increase the budget revenues (which was already overly optimistic), or to cut some other expenses.

Were the spending plans for the state armaments program fulfilled during the 2011-2016 period? Rather not, than yes, and the reason is not at all in the lack of money, but in the fact that the domestic defense industry after two decades of collapse (1991-2010) could not demonstrate the expected rates. Of course, the reasons for the failure of the HPV 2011-2020. many: here is the disruption of Polymen-Reduta’s readiness deadlines, which is largely related to the decisions of the company's management, and the conflict with Ukraine, as a result of which the Russian Federation stopped receiving power plants for its frigates, and sanctions, which resulted in slowed down build small warships. But in any case, to ensure the release of military products in the volumes that were expected during the development of the LG-2011-2020. we failed.

It should be understood that even what our industry was able to give the armed forces, breathed new life into them. From the outside, this was especially noticeable in the example of our Air Force, which by 2010 had come close to the “point of no return”. With virtually no new machines, the pilots were forced to be content with old, un-modernized aircraft, with running out of resources, outdated equipment and weapons. The average annual raid was very low, and could not be compared with what "sworn friends" provided for their pilots. Today's videoconferencing and marine Aviation not even tens, but hundreds of modern combat aircraft were replenished, and the level of combat training became completely different, although, of course, we still have room to develop. 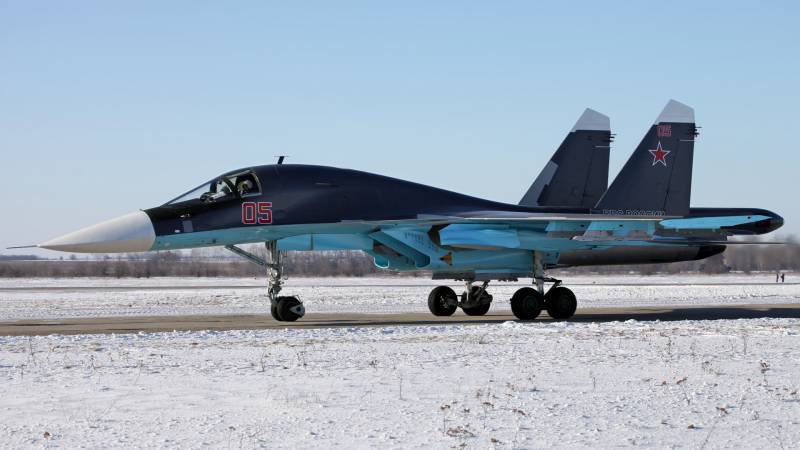 But how much was spent on HPV 2011-2020? Probably the lowest possible level of costs for its implementation is contained in the data that the Russian Federation reports to the UN. 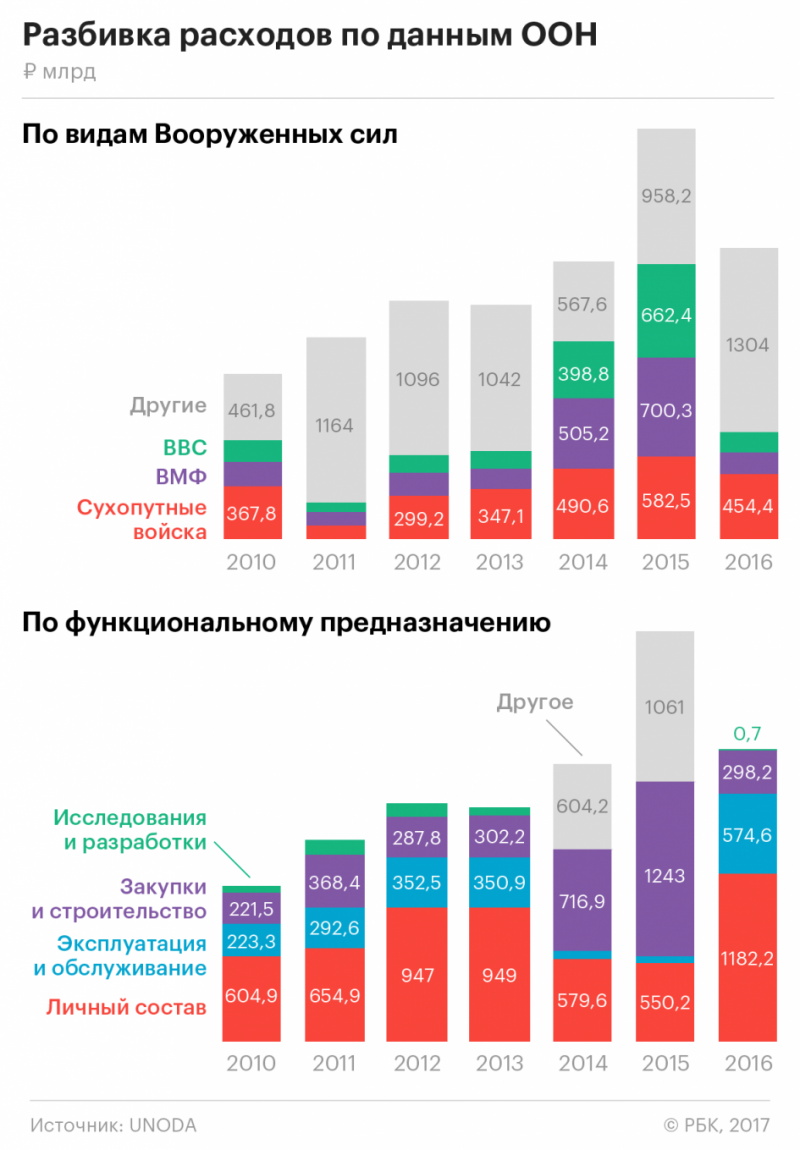 In general, the first option is to check the data submitted by the Russian Federation to the UN, then the total expenditure on the implementation of HPV 2011-2020 for the first seven years in 2017 g inclusive is approximately from 3 700 to 4 400 billion rubles. and this is probably the bottom bracket of spending. And you can just by analogy with the plan assume that the Russian Federation spent in 2011-2017 approximately 50% of its military expenditures, and in this case, the total costs of carrying out HPW for this period will be 8 368 billion rubles.

It is possible that the truth, as often happens with it, is somewhere in the middle.

On the one hand, it seems that even 8,37 trillion. rub. in seven years, significantly less than 19 trillion. rub for ten, but only if we forget about inflation. After all, the ruble in 2011 g had a completely different purchasing power than it will have in 2018 g, when funding for a new state armaments program begins. If we recalculate the amount of funds spent over 7 years for carrying out HPW (according to official inflation data and taking inflation at 2017 at 4%) into 2018 prices, we will see the 10 940 billion figure, or 1 562 billion rubles. in year. At the same time, it should be understood that 19 billion of the new state program will not be issued all at once in 2018 g, but will be issued throughout the entire program execution line. And here we are again confronted with the influence of inflation, because even with an annual price increase of only one level at 4%, one trillion in 2027 is equal to 702 billion in 2018. If we assume that all 10 years of new WUF funds will be spent evenly ( taking into account inflation) then the new HPV will cost about 15 825 billion rubles. in 2018 g prices (i.e. annual 1 costs 582,5 billion per year in 2018 prices).

Is not it true, 1 562 billion rubles. The average annual expenditure of the previous program is very reminiscent of 1 582,5 billion rubles. average annual expenditure of the new program? Apparently, this is exactly what was meant when it was said that “With inflation adjusted, this figure is close to the amounts allocated in the framework of the current program for the 2012-2020 years”. But then why then talk about reducing the financing of the LG?

Thus, we come to the fact that HPV 2011-2020's. It turned out failed. We planned an annual increase in arms procurement costs, but around the turn of 2015-2016, we realized that there was no money for a further increase in expenditures in the budget, and (there is such a hunch) even if they were, it’s not a fact that the industry will make military orders in such volumes. And now we are reducing the cost of acquiring new weapons and R & D from what was planned. Although not from what we actually allocated for rearmament in recent years.

Will the funds incorporated in the new program, enough to re-equip our armed forces? On the one hand, the 2011-2017 period can be called a breakthrough in the newest stories Russia in terms of financing the state arms program, but on the other hand, along with obvious successes, such as the massive supply of modern combat aircraft, Ratnik equipment, Yars intercontinental ballistic missiles, qualitative growth in combat training, and much, much more, there are obvious gaps, such as the disruption of the Navy's rearmament program, the refusal to supply modern tanks in favor of upgrading the T-72, etc.

From the above, one thing follows: realizing that we are in fairly cramped financial circumstances, the country's leadership should devote to planning the LG of 2018-2027. the closest attention. In order to ensure high combat effectiveness of the domestic armed forces, we must be guided by the criteria of "cost-effectiveness" and exclude inefficient and duplicative development and armaments.

However, the few information that leaks into the open press regarding HPV 2018-2027, causes reasonable doubts about the validity of a number of planned programs.

Ctrl Enter
Noticed oshЫbku Highlight text and press. Ctrl + Enter
We are
“Almaty” instead of ships: details of the HPV programBrake for aircraft carrier
Military Reviewin Yandex News
Military Reviewin Google News
32 comments
Information
Dear reader, to leave comments on the publication, you must sign in.