December 6 2017
3
After the end of World War II, in an effort to reduce its technical backlog as quickly as possible, the French armed forces began in a hurry to create new aircraft for the air force and the navy fleet. This is how the project of a piston strike aircraft and deck-based torpedo bomber SNCAC NC.1070 came into being, which was subsequently transformed into the project of a lightweight jet attack aircraft SNCAC NC.1071. It is worth noting that the SNCAC NC.1071 became the first French twin-engine jet aircraft in stories.


The development of a new aircraft by the French military was entrusted to the specialists of Société Nationale de Constructions Aéronautiques du Center. Engineers of the company designed a twin-engine aircraft of unusual layout, which attracted attention by its appearance. The first version of the aircraft was equipped with piston engines and was designated SNCAC NC.1070, the second received two jet engines and the designation SNCAC NC.1071. Both aircraft did not become mass-produced machines and were released only in the amount of two prototypes, one aircraft of each model.

SNCAC NC.1070
Work on the new aircraft started in the 1946 year, and the first prototype strike aircraft was ready at the beginning of the 1947 year. The first flight of the aircraft, designated SNCAC NC.1070, made 23 on April 1947, the aircraft was flown by the chief pilot of SNCAC company Fernand Lance. The first flights of the new combat vehicle showed that designers need to reinforce the landing gear, which simply could not withstand the loads during landing. The landing gear was three-post, retractable, each rack had one wheel large enough.

At the same time, a rather complicated wing mechanization was planned on the plane, which involved folding the left plane first and then the right plane over it. Also on the plane were air brakes that were activated by electricity. The mechanization used in its design allowed the aircraft to be used from the deck of aircraft carriers. Protection of the cockpit, which included both armor from 14 to 20 mm thick and armored glass 8 mm thick, was quite good. The crew consisted of three people - the pilot, navigator-scorer and gunner, who was responsible for the defense of the rear hemisphere. The fuel tanks of the car could hold up to 1450 liters of fuel, which provided the piston aircraft with a sufficiently large range.

SNCAC NC.1071
The design of the aircraft was unusual and, on the whole, resembled the P.38 Lightning fighter, but the NC.1070 had a full-size fuselage, which lasted far beyond the center section, there was a combat load inside the fuselage (bomb or torpedo); covered the entire rear hemisphere. The aircraft was distinguished by huge motor-gangs in size, in which two Gnome Rhone 14R-24 piston engines were installed, which developed the power of the 1600 hp. each. The plane could take on board up to 800 kg of bombs, for example, 8х100 kg or one torpedo, artillery armament was represented by four 20-mm automatic guns.

The flight tests of the new items were quite successful, but the Air Force representatives quickly lost interest in this aircraft, this was true for all projects with piston engines. The era of reactive aviation, and the propeller aircraft no longer suited the requirements of the customer. After the accident on March 9, 1948, it was decided not to rebuild the aircraft, fully concentrating on creating its jet version. The SNCAC NC.1070 project was stopped. 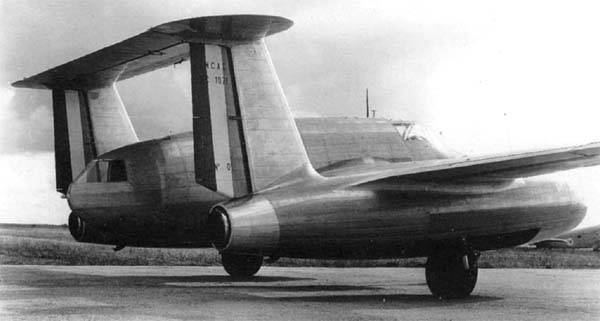 SNCAC NC.1071
After the refusal of the French Air Force from the NC.1070 piston, Societe Nationale de Construction Aeronautiques du Center began to create a version of the NC 1071 - a light jet aircraft. The aircraft was a modernized version of the previous machine, on which jet engines were installed. The project of such an aircraft was proposed to the military already in 1948 year. Instead of piston engines, it installed two turbo-jets Rolls Royce Nene 101 2350 kgf each, their release was licensed by Hispano-Suiza.

The enormous size of the engine nacelle with free tail parts, inherited from NC.1070, allowed the designers to easily place new jet engines in them, so that the conversion of one aircraft to another was almost cosmetic. At the same time, in the jet version the light strike aircraft looked preferable. The maximum speed increased from 578 km / h to 800 km / h, although the plane lost its defensive armament, located in the tail section. The practical ceiling also grew from 9,5 to 13 kilometers. However, there were problems with range. The exorbitant fuel consumption, which was characteristic of many first-generation jet engines, led to the fact that the practical flight range of the aircraft fell from 3400 to 1000 kilometers, that is, almost 3,5 times. 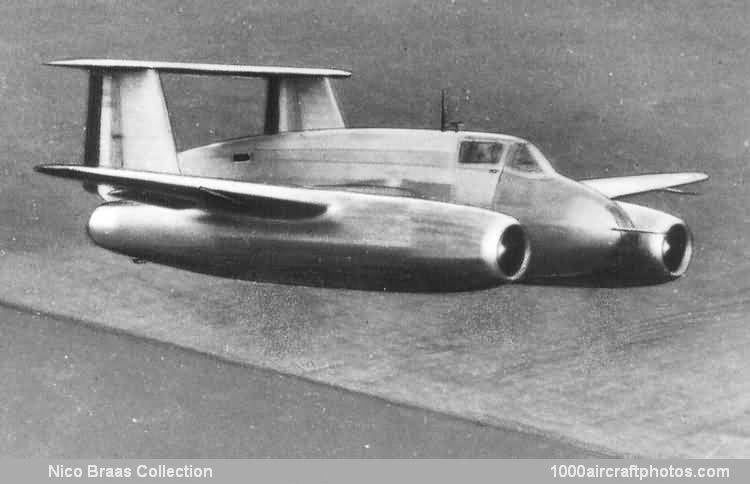 SNCAC NC.1071
The French military preferred not to pay special attention to this fact, since the high speeds of the jet machines fascinated them so much that they were ready to put up with a small radius of action. In addition, the company SNCAC promoted its development as a deck attack aircraft, and the aircraft carrier itself could approach the target at the required range of its aircraft. The first flight of the jet SNCAC NC.1071 made 12 on October 1948 of the year, that is, a year and four months after its piston twin brother went up to the sky.

As a multi-purpose strike aircraft based on the deck of an aircraft carrier, SNCAC NC.1071 had to solve a wide range of tasks: from fighting enemy ships and supporting amphibious operations to reconnaissance and anti-submarine combat. Tests of the aircraft were organized on board the aircraft carrier Bretigny. The first take-off from the deck of the aircraft carrier prototype performed 27 July 1949, and the tests themselves continued until the end of 1949 year. In general, it can be noted that the performance of the new aircraft was organized by the French military leadership, but the aircraft itself did not agree with them. As part of the tests, the prototype suffered several accidents and in May 1951 of the year after another hard landing, in which he received serious damage, they simply did not repair it, covering this project as well.

Ctrl Enter
Noticed oshЫbku Highlight text and press. Ctrl + Enter
We are
Are there any prospects for the "flying party" CP-10?60 years ago made the first regular flight of the Soviet passenger liner Tu-104
3 comments
Information
Dear reader, to leave comments on the publication, you must to register.