Press office Ministry of Defense of the Russian Federation leads the statement of the representative of TSAMO Victoria Kayayeva:
Among the documents submitted, special attention was drawn to the instructions of the Supreme Commander Iosif Stalin to the commander of the 81 Air Division, Hero of the Soviet Union Mikhail Vodopyanov about the bombing of Berlin in August 1941. The document was written under the dictation of Joseph Vissarionovich and signed personally. 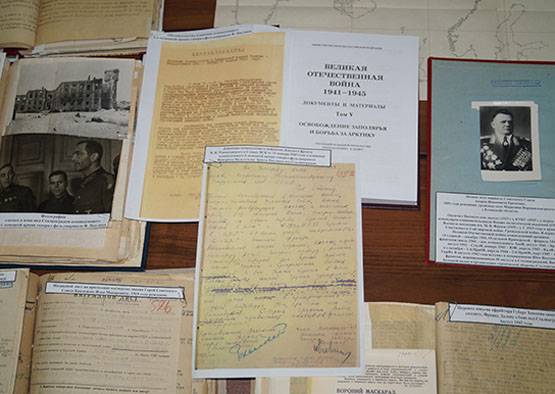 The exposition of the documents is carried out according to the titles of thematic collections:
“So the war began”, “The role of the Crimea in the war”, “Liberation of the Polar region and the struggle for the Arctic”, “Prologue of the Great Victory”, “Liberation of Ukraine”, “Military science to the front”.

In particular, on the Arctic subjects, the passage scheme of the convoy PQ-17 is presented, as well as the execution by the ships of the North fleet USSR tasks on its cover. The operation was carried out in 1942.

The Battle of Stalingrad is represented by the Prologue of the Great Victory collection of documents. Operational reports of the Stalingrad Fleet, including reports of the capture of the former commander, are demonstrated. tank the army of Paulus.

The multi-volume work “The Great Patriotic War of 1941-1945” was presented earlier - on November 28 at the Military University of the Ministry of Defense of the Russian Federation.

Ctrl Enter
Noticed oshЫbku Highlight text and press. Ctrl + Enter
We are
Victory DayRussia's weapons: learn the history and get acquainted with the novelties
Military Reviewin Yandex News
Military Reviewin Google News
15 comments
Information
Dear reader, to leave comments on the publication, you must to register.