December 3 2017
98
Recently, an emergency happened in Stavropol. One construction company demolished an old house of the second half of the 19th century on Dzerzhinsky Street in which the family of Rimma Ivanova allegedly lived - the heroine of the First World War, the sister of mercy, who was awarded the Order of St. George. 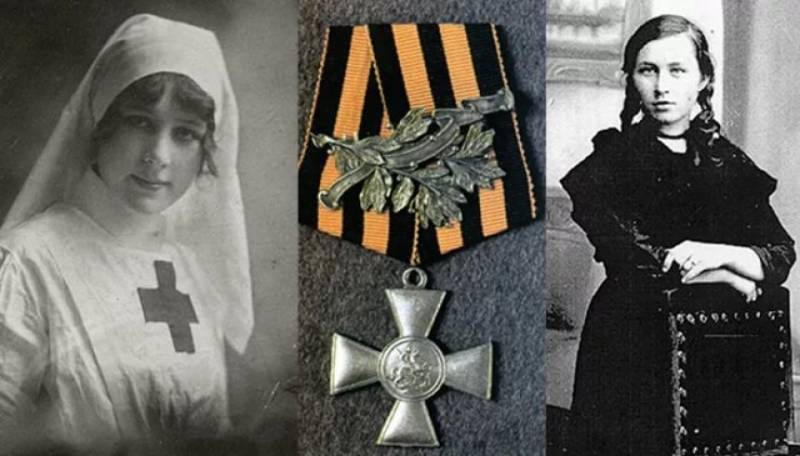 Literally a month before the demolition, the house was included in the register historical buildings of the city. But due to inconsistency between the departments, permission was given for the demolition. When the public of the city sounded the alarm, and the administrative and judicial proceedings began, it turned out that the house had nothing to do with the Ivanov family. The building where Rimma and her family lived was demolished back in the 90s ...

This story is very symbolic. Everything that was connected with the First World War, which at one time was called the Second World War, in Soviet times was forgotten. By and large, the name of Rimma Ivanova was also forgotten. But in the 1915 year, when she accomplished her feat, she was called in the newspapers the Russian Joan of Arc.

This is what the metropolitan newspapers 19 September 1915 wrote. “In the 105 infantry regiment of the Orenburg regiment, Rimma Ivanova, sister of mercy, despite the persuasion of officers and brother, a regimental doctor, worked all the time under fire, bandaging wounded soldiers and officers of the tenth company. When all the officers were killed, she gathered the soldiers to her, rushed with them to the trench, which they took, and the wounded immediately died, mourned by the whole regiment.

Rimma was born in Stavropol in 1894, in the family of the treasurer of the Stavropol Spiritual Consistory, Mikhail Pavlovich Ivanov. She studied at the Olginsky Women's Gymnasium, after which she went to work as a teacher in the village of Petrovskoye, Gratnenensky district. Here she found the news of the beginning of the war. The girl signed up for the nurses' courses and began working in the second diocesan hospital. Once in Stavropol began to form a detachment of sisters of mercy to be sent to the front, Rimma enters into it, despite the persuasion of relatives and friends.

“Lord, how I would like you to calm down. Yes, it would be time. You have to rejoice, if you love me, that I managed to get a job and work where I wanted. After all, it was not for fun that I did it and not for my own pleasure, but to help.

May I be a true sister of mercy. Let me do what is good and what to do. Think as you like, but I give you my honest word that I would give a lot in order to alleviate the suffering of those who shed blood.

But you do not worry: our dressing station is not exposed to fire. My good, do not worry for the sake of God. If you love me, try to do as I feel better. This will be true love for me. Life is generally short, and it is necessary to live it as completely and better as possible. Help, Lord! Pray for Russia and humanity. ”

At the beginning of 1915, she was already in the army, where she asked for the 83 th Samursky regiment, which was formed in Stavropol, and its young officers were at evenings in the Olginsky gymnasium. One of them describes the arrival of Rimma Ivanova:

“And now we have a sister at the dressing station, a former Stavropol gymnasium student, Ivanova, who arrived not so long ago. The soldier shaved her, gave harem pants, a shirt, an overcoat and boots. In a word, we made a soldier from a gymnasium. During the battle, she supervised our nurses, and I must say that she worked well. She herself made dressings, rubbed hands and feet frostbitten ... The soldiers terribly loved her and called Ivan Mikhailovich. ”

But parents in their letters begged Rimma to return home, they say, and in the hospitals of Stavropol, she could benefit the Fatherland. Having received news of his father’s illness, Rimma agrees to come home. But reports of heavy fighting at the front make the girl again go against the will of her parents. Rimma only makes one concession for them, signing up for the 105-th Orenburg regiment, where her elder brother Vladimir served as a regimental doctor. The regiment fought in the Polesye area of ​​the newly created Western Front.

22 September 1915 of the current army received the following telegram addressed to the Governor of the Stavropol Governorate: “The Sovereign Emperor 17 of September condescended to commemorate the late sister of mercy Rimma Mikhailovna of the Order of St. George 4 degree.

Ivanova’s sister, despite the regrets of the regimental doctor, officers and soldiers, always tied up the wounded on the front line under terrible fire, and on September 9, when both officers of the 10 Company of the 105 Orenburg Regiment were killed, they gathered the soldier and rushed forward together with them, took the enemy trenches.

Here she was mortally wounded and died, mourned by officers and soldiers ... A corps with deep chagrin and condolences testifies respect for the family of the deceased who raised the heroine - the sister of mercy. What I ask to inform parents and relatives living on the street. Lermontovskaya, 28. Commander of the 31 Army Corps, Adjutant General Mishchenko. "

It should be noted that Emperor Nicholas II awarded Rimma Ivanov with an officer's order of St. George 4 degree as an exception, since she did not have an officer's rank. Thus, Rimma Ivanova became the first woman awarded this high order for the 150-year history of its existence.

Governor Yanushevich sent a response telegram: "I ask, according to the earnest request of parents and representatives of the city and Zemstvo, to send the ashes of Rimma Ivanova, accompanied by her brother, a doctor of the Orenburg regiment, to Stavropol for the burial of the heroine who died a glorious death."

In the Stavropol archives preserved newspapers, which described the farewell ceremony with the heroic countrywoman.

“September 24 to 10 hours of the evening, to the arrival of the train, at the station gathered the relatives of the deceased, her teacher, her friends at the gymnasium, sisters of mercy of the Stavropol hospitals, many of whom stayed at the station until the next morning.

On the morning of September 25, the soldiers of the units located in the city were stationed upwards along Nikolayevsky Prospect and further along the line of the procession. After a brief word about Rimma Ivanova, pronounced by Bishop Michael, the coffin with the body of the deceased was put on a white hearse harnessed to four horses in white blankets. Ahead of the procession on velvet cushions carried Rimma Ivanova awards: two crosses of St. George, soldiers and officers, and the St. George medal. At the head of the funeral procession behind the coffin were Stavropol Governor B. Yanushevich, Bishop Michael, representatives of the nobility, intellectuals, merchants, high school students of female and male gymnasiums, theological seminary students. Next - a military brass band and a detachment of troops with a banner and weapons. The funeral procession moved under the sad ringing of bells in all the churches of the city. The clergy of the churches as they approached the procession joined him with banners and icons.

When the procession approached the building of the Olginskaya gymnasium, where Rimma studied, the choir of high-school girls met her with the performance of the mourning march "Two worlds". Further, after stopping at the parents' house, the sorrowful procession proceeded to the temple of St. Andrew the First-Called. Here, at the tomb of Rimma Ivanova, the eminent Archbishop Agafador served the divine liturgy.
The next day, the coffin with the body of Rimma Ivanova was taken out of the church to sing an episcopal chorus. The last words were spoken. That's what Archpriest Semyon Nikolsky said:

"...Yes! The sister of mercy became the leader of the army, accomplished the hero's feat ... Our city, the city of Stavropol! What glory you have been honored! France had the Maid of Orleans - Joan of Arc. Russia has a Stavropol maiden - Rimma Ivanov. And her name will henceforth live forever in the kingdoms of the world ... ”

The school where Rimma Ivanova worked was given her name, a scholarship of her name was established at the medical assistant’s school, and in Stavropol they were going to erect a monument to the heroic sister of mercy.

But a revolution occurred, and the name of the heroic girl was consigned to oblivion. Even her grave in the fence of St. Andrew’s Cathedral was destroyed. For a long time, until the end of 80's, her name was known only to historians and local historians.

A veteran of the Stavropol regional studies, museum worker Veniamin Gosdanker recalled how in 60-s he was lucky to meet with Rimma Ivanova’s brother Vladimir, who had long worked in one of the medical institutions of the city as a radiologist.

“Once, in search of the“ Stavropol antiquity ”, we, then still starting our fascinating museum journey, found ourselves in the hospitable home of the old radiologist Vladimir Mikhailovich Ivanov. They knew, of course, about the unprecedented feat of his sister, “this Russian Joan of Arc”, about the merciless oblivion of many pages of the pre-revolutionary past that had been denied. However, museum workers and then were people quite liberated in the choice of subjects. Well, well, if not in the exposition, in the eyes of ideological censors, then to the storerooms, for future times, oh, how relics from “Ivanovo penates” were!

We received from the hands of Vladimir Mikhailovich and his wife Valentina Gavrilovna rare photographs, documents, miraculously preserved fragments of a metal wreath from the grave of Rimma, pages of newspapers of that time with publications about an unprecedented funeral service in Stavropol with church and secular honors, soldiers' letters devoted to their favorite, front sister of mercy .

There was a certificate there: “This is given to the junior doctor of the 105 infantry regiment of the Orenburg regiment, the doctor Ivanov, in that he is allowed to send the body of his feldsher-volunteer Rimma Mikhailovna killed in a battle under the village of Stavropol (lips). Wet-Dubrova September 9 1915 of the year that the signature with the application of the official mastic seal makes sure. September 9 1915. The current army.

And also the museum became the owner of an old chandelier, which God knows not, but very dear to the heart of the family: it shone Ivanov long ago, reminded of the past ... ".

Today, a monument has been restored at the alleged burial site of Rimma Ivanova, since the exact place has not yet been established. On the building of the former Olginsky gymnasium, where Rimma studied, a memorial plaque was installed.

Finally, a street named after her appeared. But there is no monument to her in Stavropol. Although there are monuments to the leaders of the revolution and the Civil War with a very dubious reputation. Maybe the scandal with the demolished building, which reminded the residents of Stavropol of an outstanding countrywoman, will motivate the public to take action?

By the way, in the neighboring town of Mikhailovsk, a bust of Rimma Ivanova appeared on one of the avenues at the expense of the Fund Patrons for Children. In the future, they plan to open a gymnasium for girls "Mercy". Good start.