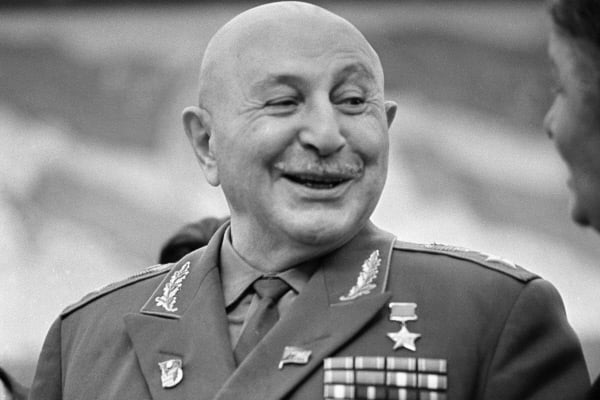 Marshal of the Soviet Union Bagramyan is a man of a unique military career, his service in the Armed Forces of the USSR lasted two thirds of a century.

He dreamed of following in the footsteps of his father and becoming a railroad worker. Entered to study this case, but the completion of education came at the height of the First World War, and as a true patriot of the Fatherland, the 17-year-old guy decided that his place was in the ranks. In less than two years, an excellent professional came out of Bagramyan, a graduate of the school of ensigns, both an infantryman and a trooper.

A steep change in 1917 gave him a daunting choice. Bagramyan was a supporter of the “Dashnaktsutyun” party, which became ruling with the beginning stories First Armenian Republic. The main threat to the young state came from the Ottoman Empire. Official Ankara had one argument for Yerevan - military. The Turks were opposed by the Armenian division, and in it the company looked solid, and then the saber squadron led by Baghramian.

Over time, the worldview of the young commander has changed. He joined the ranks of those with weapons in the hands fought for the Sovietization of Armenia. Thus began his journey to the Red Army. Bagramyan participated in the formation of the Soviet government in Georgia.

Between the First World War and the Great Patriotic War, he received a fundamental professional education, brilliantly graduating from the VA them. Frunze and the Academy of the General Staff. Accumulated team experience, comprehended in various positions the subtleties of staff work. Military career went uphill. True, in 1936, detractors began to use the fact of Bagramyan’s service in the division of the Armenian Republic as proof that he is an enemy of the people. The intercession of Mikoyan, a member of the Politburo of the Central Committee of the CPSU (b), saved him from arrest.

Colonel Baghramyan met the war chief of the operational department of the headquarters of the Kiev Special Military District (KOVO). His first operation was the Kiev strategic defensive. The troops had to hold out for as long as possible. The fact that the Nazis spent two whole months on taking the KUR meant that Bagramyan, who in August 1941-th replenished the generals corps of the Red Army, solved the problem. He once again showed professionalism, when the Germans pulled the dense ring of encirclement around Kiev and, it would seem, a direct threat of captivity loomed before the defenders, but thanks to the talent of the commander they avoided this fate. Having timely identified and promptly used a hole in the ring, Baghramyan brought thousands of Red Army soldiers out of 20's environment.

Having headed the operational management of the headquarters of the Southwestern Front, he soon proved himself to be in the offensive. The most significant result is mastering the “Gateway of the North Caucasus”. The return in November of the 1941 of Rostov-on-Don meant the successful completion of the first strategic offensive for the Red Army. The second one in the frontline biography of Bagramyan followed almost immediately. This is the counteroffensive phase of the Moscow battle. Her plan was developed literally overnight. The starting point is December 6 1941. The operation was a success by the most stringent standards. The enemy ceased to control from the south of the territory, adjacent to the capital. The Germans were thrown from Moscow on 80 kilometers. More than 300 villages, dozens of villages, several cities of regional and regional subordination were liberated. On the eve of 1942, Bagramyan received the rank of lieutenant general.

The starting point for the new stage of the combat path was July 1942-th: the appointment to the 16-th army, eventually transformed into the 11-th Guards, brilliantly fought on the Kursk Bulge.

In the Supreme Command Headquarters, the variant of actions of the 11 Guards Army proposed by its commander was considered the best. Baghramyan took the starting point for the fact that the Bolkhov group formed the nucleus of the Hitlerite troops on the Kursk-Oryol arc. And to put an end to it, in his opinion, should have been two armies - 11-I Guards and 61-I. It was supposed to make maximum use of their adjacent location, so that the offensive vectors converged. And this meant the fascists surrounded by a dense ring with their complete defeat. Further, according to the plan, the Nazis were expelled in the southern direction, a productive flank attack, and the establishment of control over the territories that previously constituted the German rear.

Did the fact that Bagramyan formulated the Stake in the form of a plan coincided with what actually happened? A word to one of the creators of victory in the Kursk-Oryol arc, Marshal Ivan Konev: “The enemy’s defense was breached on relatively narrow sectors of the front, where forces and means were boldly massaged, which ensured numerical and material superiority over the enemy’s forces. It is enough, for example, to note that General Baghramyan, commander of the Western Front 11 Guards Army of the Western Front, concentrated 40 percent of infantry divisions and all means of reinforcement on the breakthrough area, which was about 92 percent of the total front of the army. The flank attack of the 11 Guards Army was crucial for the decisive breakdown of the powerful defense orders of the Wehrmacht. The enemy was not ready for this. The prompt throw of guardsmen became a powerful help for solving problems of strategic importance confronting General of the Army Rokossovsky who commanded the Central Front. After the battle of Kursk-Oryol, Baghramyan became a general-colonel.

At the end of 1943, he was appointed Commander of 1 Baltic. According to the staffing table, the com-front should be a general of the army, and on the epaulets the commander became a star more.

The front led by Baghramyan was directly related to 10’s 1944 Stalinist strikes of the year. The compounds most clearly manifested themselves during the liberation of the territory of the Byelorussian SSR, in the Memel operation. Here, as before, the commander risked with exact calculation. For example, he knew that the standard actions of the Red Army did not lead to the liberation of the northern capital of the Byelorussian SSR - Vitebsk in the autumn of 1943. In 1944, Bagramyan, unlike his predecessors, chose a fundamentally new direction of the main attack - where there were continuous swamps. When discussing the operation, the commander of the 43 Army, Afanasy Beloborodov, insisted on repeating the attempt of 1943 of the year. The commander sharply argued with the commander. And I heard from Bagrammyan’s mouth: “Field Marshal von Bush, the commander of Army Group Center, likewise imagines our intentions. And we have to give a disagreeable surprise. We must dare. The idea of ​​the army general worked perfectly.

Bagramyan headed the 1-th Baltic Front until February 1945. Then he commanded the Zemland Group of Forces, the 3 of the Byelorussian Front. In the victorious 1945, his commanding talent became apparent during the capture of Koenigsberg, the defeat of the Courland group.

After the Great Patriotic War Baghramyan, for almost a quarter of a century, held high posts in the military command system, and then joined the group of general inspectors of the USSR Ministry of Defense. In 1955, twice the Hero of the Soviet Union, the gentleman of seven orders of Lenin became a marshal.