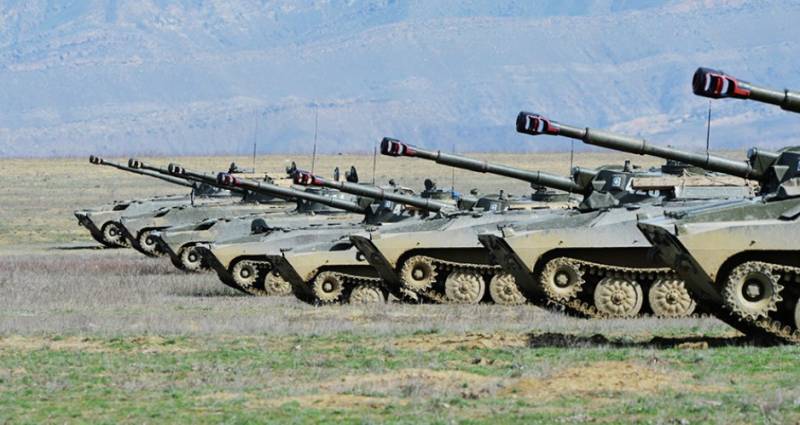 The global confrontation, which had returned to the life of the planet, made it necessary to seriously overestimate military equipment left over from the Soviet Army and intended, first of all, not for local wars, counter-terrorist operations and the fight against poorly armed rebels, but for large-scale military conflict with modern armies, and in the conditions of weapons mass destruction.

The revision of the old arsenals, and in the context of intensive hostilities in the Donbass and in the Middle East, showed that a lot of the allegedly "obsolete" weapons in fact are not at all. And after not too costly modernization, it can successfully solve combat missions in present and future wars with various adversaries. In particular, based on the experience of combat use in the Syrian conflict, the Russian Ministry of Defense decided to leave the Russian Army 122-mm self-propelled howitzer 2С1 "Gvozdika", which had previously been abandoned.

One of the reasons for which they wanted to be removed from service is the relatively “modest” caliber 122-mm howitzer 2А31, which is armed with “Gvozdika”. After all, back in Soviet times, after the transition of the NATO field artillery to a single caliber 155 mm, Soviet motorized rifle regiments began to lose substantially in terms of fire power to the corresponding Western units.

However, it should be noted that at the same time, the “Carnations” have a significant power reserve, good speed (63 km / h on the highway), high maneuverability and maneuverability. A relatively small mass, allows the use of 2C1 together with floating infantry fighting vehicles and armored personnel carriers and transport transport aircraft. Until now, Gvozdika surpasses many more modern Western counterparts in these indicators. Actually, these strengths determined the tactical niche of this system.

Combat path self-propelled howitzer 2С1 began in Afghanistan. And almost immediately it became clear that the real tactic of their use is much broader than the one for which they were actually developed - 2С1 did not fire from closed positions, but were used as assault guns. For example, in the operation to capture the base areas of Khaki-Safed and Shingar, the 2-1 batteries were advanced behind the attacking assault groups, destroying enemy resistance points with direct fire.

Such tactics, tested during the Second World War, significantly reduced the loss of personnel. In difficult areas of the terrain when escorting assault groups, for fire support, specially allocated backup batteries 2C1 were also involved.

In 1986, the ACS 2C1 was very successfully used during the attack in Kandahar Province. The battalions that squeezed out the mojaheds entrenched in the “Zelenka” were provided with additional fire support by a dedicated platoon of self-propelled howitzers. During the offensive, this platoon of the ACS destroyed seven enemy firing points, nine more firing points were destroyed by two 82-mm mortar platoons.

There are about 400 Carnations in the Syrian Arab Army, and they are the main self-propelled guns. During the current war with terrorists, it turned out that 2C1 successfully operate not only on hard-to-reach rough terrain, but also on urban landscapes (of course, subject to their competent use), as part of assault groups. There are several episodes when the "Carnations" acted as anti-tank guns, having successfully worked on tanks jihadists. However, Syria also revealed the weaknesses of self-propelled guns. In addition to the low rate of fire, it turned out that the howitzers are not sufficiently protected.

If for “regular” firing from closed positions, the existing reservation is quite sufficient, when working in direct fire, very often under direct enemy fire, which uses guided missiles, it is clearly not enough.

Carnations light armor does not protect not only from Tou and Jawellin missiles, but also against RPG-7 rounds. Syrian gunners mount their own anti-cumulative screens.

Based on this, it can be expected that in the course of the modernization, which will be carried out by one of the enterprises of Uralvagonzavod, the updated Carnations will receive enhanced protection. The modernization plans include equipping the machines with an automated guidance and fire control system that will minimize crew participation and increase the effectiveness of the shooting. The ACS should receive a more advanced ballistic computer for the sighting system, new sights and, possibly, a new chassis. Most likely, more modern loading systems will be installed on the ACS, which will increase the rate of fire, while GPS / GLONASS technologies will most likely be used more widely in the guidance and target designation system.

The initial characteristics of 2С1, which determine its high mobility and flexibility of tactical use, together with the improvements, will make the updated Gvozdiku an effective tool for solving combat missions in the context of the Russian concept of active defense.

And we can only welcome the fact that in the defense ministry, at last, a truly economic, careful approach to the Soviet inheritance has prevailed.