The return of Europe

December 2 2017
26
Europe is beginning to seek a way out of the sanction deadlock. About it says Yanglan, it is supported by Merkel. The main German “mother”, who does not want to leave the political Olympus, now begins the “second bloom” of the Grand Coalition. The CDU / CSU and the SPD, faced with the prospect of early elections, nevertheless reconciled their pride and went into negotiations. The SPD, already in the last convocation of the Bundestag, advocated improving relations with Moscow, and the coalition with the FDP and the Greens failed largely due to the obstruction of the latter regarding Nord Stream - 2 and the overly liberal-globalist program of free democrats. If the Big Coalition is restored, its course will be much more favorable for Russia than in previous years. 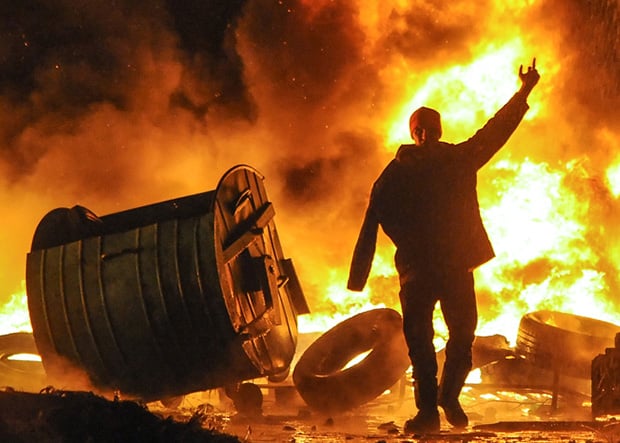 Even the Poles have already warned the Ukrainians that a foreign political reversal is brewing in the EU and hypocritically noted that Warsaw cannot do anything to help Kiev. In fact, he does not want: Poles have their own apples more expensive than supporting Bandera killers, who in the Crimea and Donbas ethnic cleansing of the Russians only wanted a story, and cut down the Poles in Volyn and Galicia by the roots. And it is so reliable that in the “Polish city of Lviv” there are less Poles left than Jews (even though the last Galicians, along with the Germans, were also slaughtered inspiredly).

Only a year and a half ago, Czech President Miloš Zeman, who spoke for the lifting of sanctions and forging relations with Russia, was called a political marginal in the EU and Ukraine, which had no serious powers. Today, he is the guru of Euro-Russian relations - Deng Xiaoping of European Eastern politics, about which De Welt writes about the need to revise, explaining to his readers that the cold war and power confrontation are bad, and constructive relations with Moscow based on the recognition of Russian status Crimea is good.

It looks funny. But in fact, everything is not so funny as it seems, but it may end up completely tragic. And all this goes.

It would seem that “the hour has finally come”, when the newly established Europe turned away from Ukraine. It remains to wait for the Bandera regime to fall, “the dungeons will collapse” and “everything will be like in the presence of grandmother” (Catherine), when the last hetmans of Chubat Cossacks were not for fear, but served conscientiously for Russia and couldn’t think that their “glorious great-grandfathers Great Great-Grandchildren Unclean ”will become not only not Russian, but anti-Russian.

But the regime that came to power on blood, held on blood, eaten on blood and drank blood, will not leave without bloodshed. All of its leaders, all its activists, and even the mass of ordinary inhabitants are smeared with blood over their ears. Moreover, if earlier it was possible to simply go to the service of the new government, pretending that it was not involved in anything and was not involved in anything, now the “Internet” keeps all the revelations about the “May shashlyk” and “Colorado females” all promises to level with the ground, to destroy, all the advice: “suitcase, railway station, Russia”, etc. Now you can’t say: “I didn’t know, I was truly mistaken.” Now you will not cry in a hysterical fit of imitated joy: “I was waiting for you, Vova!”

Now the monstrous face of the Maidan "culture", the former "Right Sector poetess", the bearer of advanced European values ​​in the lost cotton masses, Yevgenia Bilchenko, "saw the light" and went to Russia to put up, but returned offended and not understood. Her offers to forget everything and live together as before, did not interest anyone. The girl was offered to pay and repent, pay and repent, then they promised to think about an amnesty (but after the trial).

So this exalted scarecrow really wanted to do it better, and did not call anyone to kill. On the contrary, she declared the need for dialogue and peaceful coexistence with people of different political views. Just because of her infantilism, the girl did not understand that it was impossible to make an armed coup (because the democratic way was not allowed by the authorities) and immediately return to a peaceful life, as if they did not burn the "Berkut", did not kill the policemen, did not beat the peaceful citizens, did not shoot their own "Heavenly" that waders in the hunting season.

What, then, to talk about those who are guilty? Who gave the orders, who created the battalions of criminals, who armed the Nazis, who shot at the cities of Donbass from large-caliber guns, whose planes bombed the Lugansk Regional State Administration, who marauded, raped, killed civilians, who violated military duty, changed the oath and the Constitution, and being in made with weapons in the hands against his own people, who tortured in the dungeons of the SBU, who burned in Odessa, who buried the "separatists" in the forest belts near Dnepropetrovsk, who organized and carried out the blockade of the Crimea. Yes, a lot more that was done during this time. And not tens and not hundreds of thousands - at least one and a half - two million, including the “journalists” of the leading publications and TV channels of the country, former presidents, acting oligarchs, pseudo oppositionists, and so on.

If they knew that Russia would be replaced by the Nazi regime, they would not be particularly worried. Moscow, often to its detriment, is committed to the spirit and letter of the law. Every wine must be proven. The retribution must be guilty, but the judgment determines guilt. Collective responsibility is not allowed. Can not be punished on the basis of the laws entered retroactively. Many conventions tie the hands of the rule of law and prevent it from applying the principle of justice instead of the principle of law.

But the “patriots” of Ukraine, who are now clearly and clearly seeing the “patriots”, understand that even if someone expels the Nazi radicals, who are just about to replace Poroshenko and plunge the remnants of the country into the era of fighting gangs, it will not be Russia, they will be people's republics. Not only Donetsk and Lugansk are not necessarily, there may be more of them, and maybe only Novorossia or Little Russia (or even Ukraine, but under other colors) may come. Only they come evil, not forgotten and not forgiven and not burdened by formal legal proceedings. They have only one view coincides with the Kiev regime. They also put a revolutionary need above legal formalities. And, by the way, they have very comfortable, not at all European, legislation. It provides for the death penalty. And to issue, if anything, you can backdating, who then check?

Of course, the Kiev leaders and their assistants had understood before that in the event of a defeat in a civil war, a quick death was not the worst outcome for them. Civil 1918-1920 of the years left in the memory of such samples of "humanity" of a small Ukrainian, which still freezes blood in his veins. But until recently, Kiev puppets felt under the reliable protection of Europe and the United States and did not believe that they would abandon them to their fate. The stories about the “American missiles near Bryansk” are not only impressionable Russian housewives and patriot watchmen driving crazy, Ukrainians also believed that they were needed by the Americans, if not as a showcase, then as a military base. But it turned out that they are not needed at all.

It was then that before the stumped, drunk and shed blood of the bandery, the prospect of meeting alive and to the teeth armed “Colorado” on the streets of their own capital and even of the “cultural” Lvov arose. And they felt cornered by a rat. And, as you know, a rat that can neither run nor capitulate beats to death. It doesn’t matter that it is rabies based on fear and spurred by despair.

Their spiritual father, Hitler, when he realized that he had lost, was trying to carry the entire German people with him to his grave. Their forerunners, Bandera, knowing that they had lost, slaughtered everyone in an impotent rage (teachers, doctors, representatives of the local administration, even ordinary Galicians who did not resist Soviet power) who they could reach out to.

But then there was no "Internet". Whoever wanted, could go abroad, someone moved to another region of the Union and began life from the beginning. Until the end, only the most ideological continued to kill. Now, "ideological" willy-nilly has to be everything. Dreaming to squeeze into first places in the "great European Ukrainian state," they all spoke and did enough. And nowhere to run. No one needs, because they can not do anything, but all the crimes are fixed and bills will be presented.

Therefore, they will kill to the end. Anyone who can. Especially those who are defenseless and at hand. And they don’t think about the future. They know that they have no future. Therefore, the “peaceful economic manager” Yekhanurov, who has been silent for many years, suddenly comes up with a more radical statement regarding Donbas than the radical gangster Avakov. The Buryat Yekhanurov born in Yakutia, who came to Ukraine after graduating from school, demanded all those who don’t love Ukraine enough either to deny civil rights or to drive them to the very Siberia from which Yekhanurov got out.

He didn’t just talk to the camera in The Hague for no reason. The instincts that escalated over the many years spent in Ukrainian politics suggest the “Ukrainian” and “patriot” Yekhanurov that those who do not want to be killed by the radicals should become more radical than the radicals and call for murder, but they will also need to kill.

So, the return of Europe to an adequate Eastern policy, of course, promises us a quick decline of Ukrainians, but sunset is extremely bloody.

Ctrl Enter
Noticed oshЫbku Highlight text and press. Ctrl + Enter
We are
About Stalin and KhrushchevWhat you didn't want to know about England
Military Reviewin Yandex News
Military Reviewin Google News
26 comments
Information
Dear reader, to leave comments on the publication, you must sign in.