"Ivan Tarava" - the hostage of admirals and politicians

December 2 2017
41
As part of the development of the landing forces of the USSR Navy, which required a larger and more versatile (multi-tasking) ship than the Project 1174 BDKs available at that time, as approved by order of the Commander-in-Chief of the Navy Admiral Fleet The Soviet Union Sergei Gorshkov, experts of the Nevsky Design Bureau began around the mid-1980s to study the question of the possibility of creating an amphibious assault ship of a new class for the country - the universal amphibious assault ship (UDC) of project 11780, which has a docking chamber for receiving amphibious assault landing gear and capable of carrying a fairly large air group, for which the ship was supposed to have a continuous, over the entire length, flight deck of a large area. A promising ship was supposed to land personnel and landing equipment using helicopters and landing boats, as well as through the bow and stern ramps. In the process of its design, it was supposed to take into account individual developments on aircraft-carrying cruisers of the Kiev type. 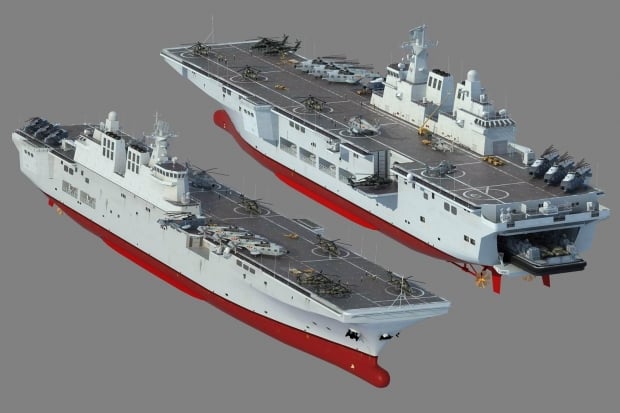 Due to the fact that the conceptually promising Soviet UDC largely repeated the American UDC of the Tarava type, the nickname Ivan Tarawa was quickly established behind it. On the other hand, in Nevsky PKB, the ship was not only developed in the classic UDC version, including the sub-version with the incorporation of Yak-38 type aircraft into the ship’s aviagroup, vertical take-off and landing (VTOL) aircraft, but also in the anti-submarine version (helicopter). It was planned to build two ships - "Kherson" and "Kremenchug".

The original, “clean landing” version of the ship provided for a continuous flight deck of 200x25 m size, which could be used for the production and reception of both the Ka-29-type amphibious transport helicopters (12 helicopters in the naval air group) and Yak-38 aircraft. Helicopters were to be used to deliver troops to the coast and provide fire support to them. Later, in the antisubmarine version, the possibility of basing on the ship twice as large — up to 25 machines — the number of Ka-27 helicopters was registered.

All armament, including one X-NUMX caliber AK-130 two-gun artillery, mm, one Dagger anti-aircraft missile system (SAM), consisting of three or six eight-shot vertical-launch (ATD) rocket launchers and anti-aircraft missile and artillery system (ZRAK) “ Dirk "in the composition of two - four combat modules, and various radio equipment (antenna radar posts, electronic warfare, etc.) were placed in the superstructure-island, which was shifted to the starboard.

The project provided for the presence on the ship of a sufficiently capacious dock chamber, where amphibious boats could be placed (four or five displacement boats of the 1176 project or two or three hovercraft of the 1206 project) and through which it was possible to land amphibious amphibious equipment. The design of the UDC also provided for bow and stern ramp.

The UDC of the 11780 project had the following calculated tactical and technical elements: the normal displacement is 25 thousand tons, the total displacement is more than 30 thousand tons, the greatest length is 196 m, the length of the shipboard waterline (KWL) is 180 m, the maximum width is 35 m , KVL width - 25 m, draft - 8 m, autonomy for reserves of fuel, water and provisions - 30 days.

The main turbine power plant (GEM) 100 power thousand liters. with. (according to other sources, even 180 ths. hp / 142,4 MW) was assumed to be unified with the destroyers of the 956 project and should have provided the ship with a full speed of 30 nodes, as well as a range of 18 miles to 8000 miles.

Landing capacity - up to 1000 people, plus about 70 units of various military and automotive equipment or 40 basic tanks and 15 armored personnel carriers.

However, the development of the UDC project 11780 was eventually terminated at the design stage.

Domestic naval historians agree that the UDC of the 11780 project has become hostage to the “confrontation” that took place between the Admiral of the Soviet Navy Head of the Soviet Navy Sergei Georgievich Gorshkov and the Deputy Chief of the General Staff of the USSR for the Navy Admiral Nikolai Nikolayevich Amelko. The latter had previously been Gorshkov’s deputy for antisubmarine defense (PLO), but, as is believed, forcedly, due to insurmountable disagreements with the Glavkom, he moved to the General Staff. In the Russian specialized literature, it is indicated that when the 11780 project was reviewed by the General Staff, it was suggested that Admiral Amelko would modify the ship — place a springboard in its nose and provide additional types of aircraft on the ship.

It is alleged that Sergei Gorshkov considered that the implementation of such a “request” was in the hands of a group of high-ranking opponents of the Soviet aircraft carrier program, which, it is believed, included Admiral Nikolai Amelko. And as a preventive measure, Sergey Georgievich instructed the designer to transfer the two-gun 130-mm artillery unit and two batteries of the Dagger anti-aircraft missile system, six UVPs in each, from the superstructure to the nose - where the springboard proposed by the General Staff would be located. In addition, the basing of VTOL was no longer envisaged. Naval science was ordered to "scientifically substantiate" the need for such changes, which was done. However, in this form, the General Staff ship was no longer needed.

It should be especially noted that there were problems with the choice of a place for the construction of ships with such a displacement and size. At that time it was possible to build them only at the Black Sea shipbuilding plant in Nikolaev. But then the latter was the main protagonist in the Soviet carrier program, and the shipyard could not draw both classes of ships. Domestic sources indicate that, in the event that the plant imposes obligations to build, in addition to aircraft-carrying cruisers, two UDCs, the labor intensity of producing each of which reached 13 million man-hours, both of these programs could be in jeopardy.

The next attempt to give the fleet a full-fledged universal landing ship - in the form of an improved amphibious assault ship-docking-type "Mistral" - was undertaken in the new millennium. However, also to no avail. Now all hopes are placed on the UDK type "Surf". The future will show how reasonable and realistic they are in practical implementation.