How the CIA Fights Russia with Hollywood Films and History Falsifications 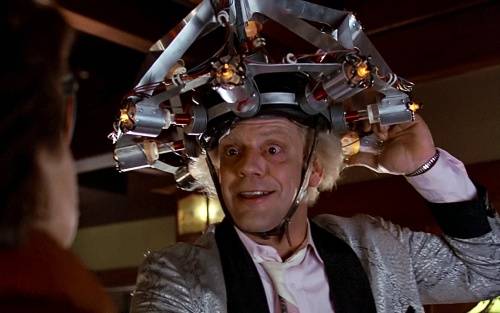 Shot from the film "Back to the Future"


For the support of "very close" Hollywood producers and directors, the CIA supplies them with, among other things, film ideas.

These ideas come from used or unrealized operations of the special services; are processed in order to not disclose transaction data and are presented as a harmless adventure ...

One of these films, behind the external harmlessness of which the monstrous crimes of the United States (and a couple of especially close satellites) against humanity stand, is Back to the Future.

The essence of the film is how insignificant interference in the course of events in the past drastically changes the future. One action "starts a chain reaction," which can "destroy the whole family", read - the country.

This is well shown in the second part of the film, where the random event that led to the rejection of the American city of Hill Weili with its “most worthy resident” and “America’s greatest living legend,” Biff, in the worst parallel future, resembles Russia 90's very much led by “ liberator "Yeltsin.

The same thing, but not in the movies, does the CIA in real life.

It’s enough to get into the past, falsify the causal relationship of a particular event, change the plus to the minus, and armed with “freedom of speech” (declaring this or that historical the fact is controversial, the issue is “debatable”), to begin to impose its previously deformed interpretation.

And the following amazing metamorphoses will occur: famine in the USSR, provoked by the food blockade of the West, will turn into a “famine” of the Ukrainian population (the victim will turn into a rapist); the savior of the world from fascism will become a tyrant (the hero will be a criminal), and the people who liberated the planet from colonialism and racism will turn out to be a “pathological aggressor” and “genetic garbage”, etc., etc.

All of the above, but in a concise manner, is contained in the words of the madman’s hero of the film, Dr. Brown: “The time continuum was broken — a new event sequence emerged that changed reality.”

In fact, an artificial “neuromodification” of the thinking of millions of people is being produced in order to change their future in favor of the United States.

This colossal operation covers the whole planet: the list of all falsifications of history is endless, the consequences are catastrophic, the victims are tens of millions.

The CIA employs hundreds of closed institutions in the United States and Europe, studying all the institutional supports of each victim state (culture, history, education, economics) to find the possibility of their erosion and destruction, in order to subordinate and colonize the entire state.

One of the most effective ways is the deformation of the past. Through this tool, hostility is activated within society: it seems to one that they “finally know the real truth”, others rightly consider this “new truth” to be sabotage, still others consider those and other enemies, fourth try to “understand” and reconcile everyone ...

Inspired from the outside, disagreements plunge the population into psychological stress, deprive, especially the younger generation, clear guidelines and a balanced outlook ... The society is degrading and the state is weakening. All this leads to civil antagonism and creates prerequisites for a social explosion or criminal indifference to the fate of the country and the people.

The worldview and the system of landmarks are the primary goal of destruction for psychologists-terminators from the CIA.

Z. Freud, whom the liberal pseudo-intelligentsia, together with the patriotic believers, had been trying to turn into a ridicule in our country for many years, said: "The need for a system of orientations is inherent in human existence." That is why one of the first targets for the destruction was a slender Soviet system of moral guidelines.

Denying or underestimating this global psychological aggression of the West leads to disastrous results. In the Western closed institutes of historical sabotage and neuromodification of thinking, real scientists work, with a twisted conscience, but scientists.

They are successfully fulfilling the CIA order to turn experimental people into controlled biomass, capable of artificially motivated aggression to destroy their own and other people's memory, dignity, common sense and truth, as the first step towards the physical extermination of opponents and the destruction of statehood. What is happening today in the Middle East and Ukraine. The same happened in Russia 90-x.

Like genetically modified plants, neuromodified individuals are incredibly resistant to external influences. No analysis, no reasonableness can shake their faith in the "new truth" (plausible lie). Therefore, most scientifically deceived citizens will forever remain spontaneously hostile to any hint of logic and common sense.

For example, the “mourning” of innocent victims of political repressions eighty years ago does not prevent these citizens from applauding the killing of people who want to speak their native language or resist terrorism and fascism.

This only proves the artificial nature of the artificially prolonged “mourning”, caused not by a sincere grief and a sense of humanism by the mourners, but by the specific geopolitical task of their masters. For example, to cover up an unprecedented liberal robbery and an attempt to destroy Russia with a “positive” agenda - “the struggle against Stalinist tyranny”. With the very tyranny that, if it was, it has long been deposed by others, without any help.

Thus, people, like experimental animals, are doing the opposite of preserving their community and state.

New “programs” and “applications” are easily written into the brains of neuromodified for each new case of barbarism of their owners.

Therefore, any of their arguments, "facts", "convictions", justifications of Western aggression, condemnation of the actions of the Soviet and Russian authorities ... are not diverse, they have a pattern, they show signs of directly borrowing other people's "views" and blind faith in them. And therefore, it is useless to argue with them as with opponents deserving interest and respect, and it is senseless to wait for a positive result of their activities in government-occupied government positions and in commercial enterprises.

All neuro-modified could be normal citizens benefiting society (as they were in the USSR), do not have the ominous West access to their ears, or Russia’s will to realize the fallacy of the error imposed on it that freedom of speech without quality control and proportion is “supreme value".

The longer it remains unchanged, the more inevitable and sharper will be the competitive confrontation between groups, structures, diasporas, secret and imaginary "societies", most of which have antisocial, marginal principles. All these communities are created to draw people into their orbit without positive state moral support. That is why the West so violently destroys any mention of a state ideology that can heal and strengthen the nation.

The appearance of the first film “Back to the Future” in 1985, and hence the “leakage” of his ideas to Hollywood, testified to the completion by the US special services of preparation for a large-scale sabotage after the collapse of the USSR and confidence in the irreversible nature of the process.

This confidence was based not only on successful recruitment and implementation of personnel in the top leadership of the country and in cultural institutions, preparation of food and industrial sabotage, increase in the information flow of believable lies, etc., but also on the knowledge of psychology, which guarantees the predetermination of the deterioration of the country after "Operational" intervention in her past.

Similar experiences of the United States were successfully carried out in many countries, as well as on their own citizens, who faithfully believed in the “victory” of their country in World War II, on the moon, the “freedom” of speech and private capital ...

Practically already in 1985, the West for 100% was ready for the collapse of the Soviet Union, and in 1989, at the time of the release of the second film, knew in detail how it would be. There remained the last goal - the highest post of the USSR. After the drive of Gorbachev, all processes received acceleration.

Caused by “pluralism” and “glasnost” (an adapted version of “freedom of speech”), Gorbachev’s civil antagonism quickly turned into an armed aggravation along the perimeter of the RSFSR, and ended in a coup d'etat and Yeltsin’s fire from tanks according to their own citizens in the center of the capital and the Yeltsin’s war in the Caucasus.

Such is the power in the irreversibility of the fall of the state that the malicious neuromodification of the thinking of its citizens has! Similar things happened on the whole space of the former socialist camp. No element can cause such large-scale and prolonged destruction!

Russia has experienced the power of such psychological intervention in a violent “rethinking” of its past in its own skin, and continues to experience it to this day.

And nothing will change in the behavior of enemies, until Russia returns to a common understanding of its history and does not understand that digging in someone else’s past is connected only with the desire of the West to shift the blame for their fantastic crimes to those who tried to prevent them with all their might.

As rapists and murderers prefer darkness, like crooks naivety, so the US needs ignorance.

Russia must give the green light to the truth (first of all at home), in which all world criminals will be uncomfortable to do their own dirty deeds. So, we must recognize that not only the countless victims of coups and civil wars in Yugoslavia, the Middle East, Ukraine are the result of the aggression of the West, but also the victims of the Great Patriotic War on their conscience, including forced internal repression in the USSR, deliberately renamed West in the "Stalinist".

In 1936, the Anti-Comintern Pact was concluded between Germany and Japan, to which Italy, Finland, Romania, Turkey, Bulgaria, Croatia, Slovakia, Spain, Hungary joined in 1937. It was this design of the military alliance that the Soviet leadership objectively considered as the final step in the early unleashing of World War II by the West, the main goal of which would be the USSR and socialism.

Thus, in the large-scale preparation of the defense of the population and the just organization of society against imminent fascist aggression, the Stalinist government was forced to begin the stripping of the fifth column. The forces were too unequal - the whole West was against one country, so any mistake in underestimating the enemy could threaten the Soviet people with complete extermination. So, it is not Stalin who is to blame for the repressions of 37 and 38, but the West menacingly hanging over the country.

"Stalin's repressions" - one of the main American fundamental state destroying fraud, along with the "evil empire", etc.

Neuro-modified ones will not be able to realize this, not because it is difficult to understand, but because it is much more difficult to accept the truth about their monstrous delusion. After all, the majority of Russian citizens to one degree or another are consumers, which means carriers and victims of information infection of American production. All the bad things they have learned about their country over the past 30 years is a hostile fiction and scientifically-invented lie.

Their own inner voice of the truth, crushed by “public opinion”, trying to break into consciousness, creates a nervous tension that develops into pathological aggression against any truthful word spoken publicly. Therefore, they are so tireless in imposing delusions introduced into their brains, despite the devastation they bring.

This is how the American propaganda system of lies and madness, which has become the most terrible in the history of mankind, now works!