December 4 2017
22
In Ukraine, two events occurred that deserve special attention. The Migration Service of Ukraine extended the term of Mikhail Saakashvili’s legal stay in the country until March 2018. Saakashvili noted this significant event for himself with a statement: President Poroshenko allegedly ordered his arrest. 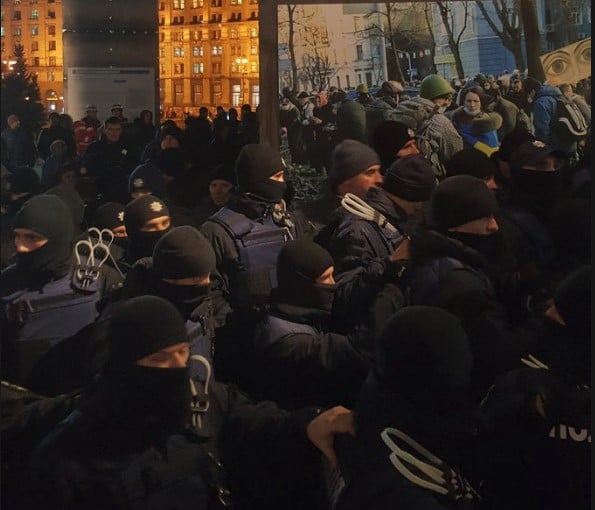 The chief of the Interior Ministry and the Nazi-Azov Arsen Avakov defiantly embarked on the “warpath”, making a scandalous, loud statement about Russia and the West. This time, he called Russia “a rabid dog”, from which Ukraine is defending Europe, accused the West that he “deceived” Ukraine, and declared that “Minsk” is dead ”.

Avakov’s thesis about “deceiving the West” is the old Bandera neo-Nazi slogan from Western Ukraine, who are now shouting on Maidan, “the name of Saakashvili”, chants: “Avakov is a dog - hang on a gilyak!” So ​​it’s clear where the Avakov’s head is for walking dogs, and on the other hand, he repeats the old slogan of "true Bandera", who consider it just not real. Avakov obviously makes a sharp turn, or is trying to do, and if Mikhomaydan stops calling Avakov a “dog,” then Poroshenko will finally become Yanukovych - 2.

Politically, Interior Minister Arsen Avakov, with his demarche, spoke out against President Poroshenko, and this puts the head of state in the position of Yanukovych. Politically, Avakov headed the “war party”, for which Minsk has long been dead, and it demands the resumption of a full-scale war in the Donbas. The other head of this party, Turchinov, publicly urged to issue a decree on the introduction of the Ukrainian Armed Forces in the Donbass.

However, the Supreme Soviet of Ukraine submits Poroshenko as commander-in-chief, the Ministry of Defense is headed by his protege Poltorak, who shows no desire to fight, and the chief of the General Staff, Muzhenko, is afraid of great losses during the attack. Thus, the “war party” in Kiev needs an order or Poroshenko’s decree about the start of a new war in the Donbas, or a full-scale maidan against Poroshenko. Mikhomaydan Poroshenko has already declared not a real, fake president.

Until recently, Avakov’s political ambitions were stopped by one circumstance: he was too odious with his Nazi “Azov”: unarmed for Europe, did not pay visits to the USA, unlike other Maidan leaders. But if “Minsk is dead”, then Europe is eliminated from the game, it has withdrawn itself and this has deceived Ukraine. And the United States is not formally involved in the Minsk agreements.

For Washington, Avakov is now the ideal mercenary to escalate tensions in the Donbas: he has not been seen in disreputable ties with the US State Department. It can be predicted that the State Department, and its embassy in Kiev, will begin to play along with Avakov, indirectly support him, while remaining in the shadows.

In general, today there are many different field commanders or atamans in Bandera who make strong statements, and old commanders, like Tymoshenko, have gone into the shadows, and the young everywhere are lighting the stars. Nadia Savchenko distinguished herself recently in Poland, where she said bluntly: “the president of Ukraine is evil.” And she continued: “the authorities began the war in Ukraine,” and “the militia and the armed forces of Ukraine are ready to talk with each other.” What is fake here - guess from three times!

The dramatic change in the policy of Poland, which missed Saakashvili to Kiev and continues to escalate the anti-Ukrainian sentiment in the country, also raises questions. This worries, for example, deputy. NSDC Secretary of Ukraine Stepan Gavrish: “I watched the Polish press. It seems that Poland is preparing for a serious war with Ukraine. Not just criticism, but derogatory criticism, including the fact that Ukraine is pursuing an anti-Polish policy. ” By the way, this, objectively, confirms Avakov’s thesis that “the West deceived Ukraine” and the wisdom of Gogol Taras Bulba: “What, son, did your lyahi help you?”

The future of the Bandera regime, most likely, for Avakov, although he does not grind on the Move, does not grind at all. Another contender for the role of the savior of Ukraine - Saakashvili poorly blurs, while they are separated by the old conflict, which is an obvious problem of the beginning of the third Maidan and requires some solution. At all, история grins over us: two “Stalin” lay claim to the role of dictator of the Maidan of Ukraine: Georgian and Armenian ...

Ctrl Enter
Noticed oshЫbku Highlight text and press. Ctrl + Enter
We are
Reports from the militia of New Russia for 27-28 September 2014 of the yearResults of the week. "Either true or all is well"
Military Reviewin Yandex News
Military Reviewin Google News
22 comments
Information
Dear reader, to leave comments on the publication, you must to register.