Overcoming the split of the UOC. “Repentance” of Filaret, or Where to Wait for Betrayal 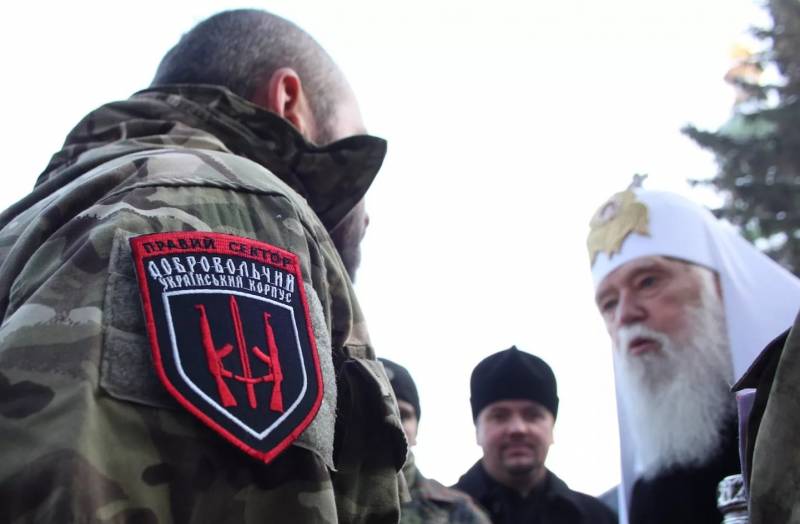 The effect of a bombshell: this is how one can characterize the reaction to the message that the head of the unrecognized Ukrainian Orthodox Church of the Kiev Patriarchate (UOC-KP) Filaret asked Moscow for forgiveness. And despite all subsequent attempts to smear this fact on the part of the press secretary of the main splitter of Ukraine Yevstratiya Zori, the UOC-KP was forced to admit that the fact was taking place, although “this is not exactly what everyone thought of him” ...

Understanding Filaret is simple. In his 88 years, it’s time for him to think about the soul or the near future. Will he survive to the collapse of his offspring (UOC-KP) or not, but it's time to think about something. And he thinks (he was always smart). Probably, it came to the realization that not everything is so simple in this world and with Moscow must be considered. The political situation in Ukraine can change very quickly, and in this case what will Philaret, who has his hands stained with blood, to do? That's right, we need to build a place in Moscow, as all clever Ukrainian “patriots” are doing today. At the same time, he is well aware that, in the event of signing a real agreement with the Russian Orthodox Church, the less shrewd Ukrainian “patriots” will cut him into pieces, as has happened more than once with those who have sold the “ideals of fluidity”. And so he and his secretary today are forced to play up.

The beginning of the split (pride showered)

It is noteworthy that just at this time he fought hard with his future "brothers" who wanted to go to Ukraine in autocephaly.

In the July election of 1990, he became only the third, and the patriarchate had to be forgotten. Meanwhile, in consolation, Moscow gave the Ukrainian church internal independence and contributed to the election of Filaret to the position of its head. But Denisenko was offended, and he was already unstoppable. In the wake of 1991 events, a plan was devised for the complete separation of Ukrainian Orthodoxy from the Russian church. 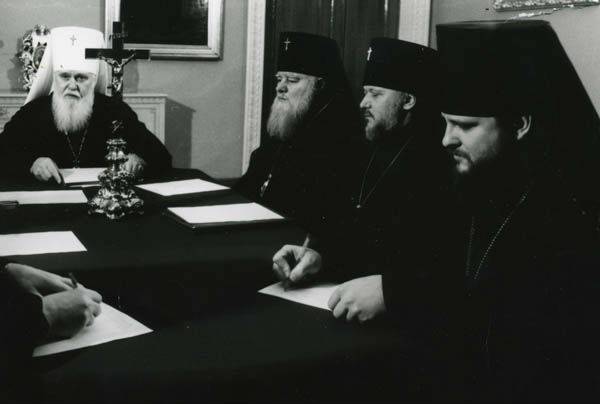 1 November 1991, stunned by what is happening in the country, the Council of Bishops of the UOC declared the full independence of the Ukrainian Orthodox Church. It was a strong move, but it was Denisenko’s last great success. Moscow did not recognize this decision ...

Six months later, on April 2 at the Council of Bishops of the Russian Orthodox Church in Moscow, almost all Ukrainian bishops recalled their signatures and demanded that Filaret resign. But he refused to do it, and 1992 June 25 of the year announced the creation of a separate Ukrainian Orthodox Church of the Kiev Patriarchate ...

As a result, Filaret was expelled and anathematized in 1997.

We can say that the history of the UOC-KP as two drops of water is similar to the history of Ukraine. Over the years of its existence, 25, in unison with the political upheavals in Kiev, it towered, then went into the shadows. As soon as the leadership of Kiev began to make friends with Moscow, they forgot about Filaret, but after each turn towards the West, he became one of the central figures in the country's political life. 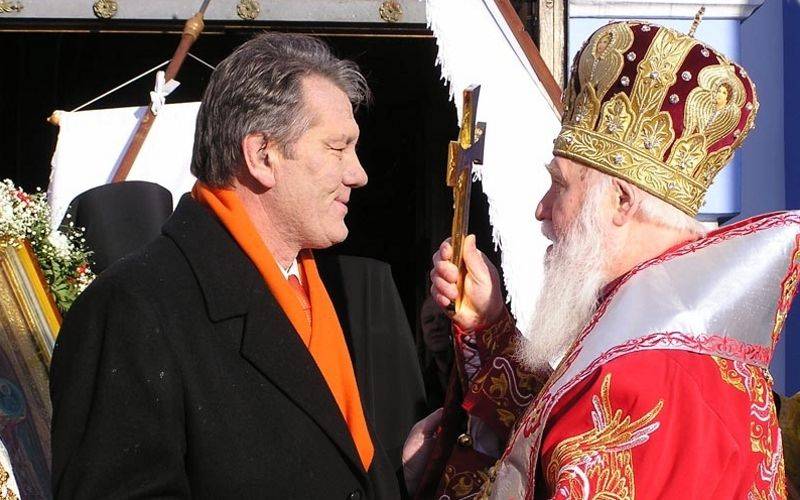 This was the case during the first Maidan, when the UOC-KP, having fully supported it, was finally taken care of by the new regime. If you look at the history of Philaret's ordeals by recognizing the status of the UOC PC during the reign of Viktor Yushchenko, then we will see a complete copy of today's events. True, it was still without blood. But the essence has always remained the same: to tear Ukrainian Orthodoxy away from Moscow in any way and subordinate it to the Patriarch of Constantinople. If it were at the mercy of the latter, then it would have been so for a long time. But did not grow together ...

It is now clear that Kiev dissenters will never get permission for independence. The Orthodox world is not ready to quarrel with Moscow in favor of Filaret and his company. I think they understood it themselves. While Moscow was weak, or there were chances with the help of the West to break its will to resist, Filaret and his associates did everything to “gain” independence. 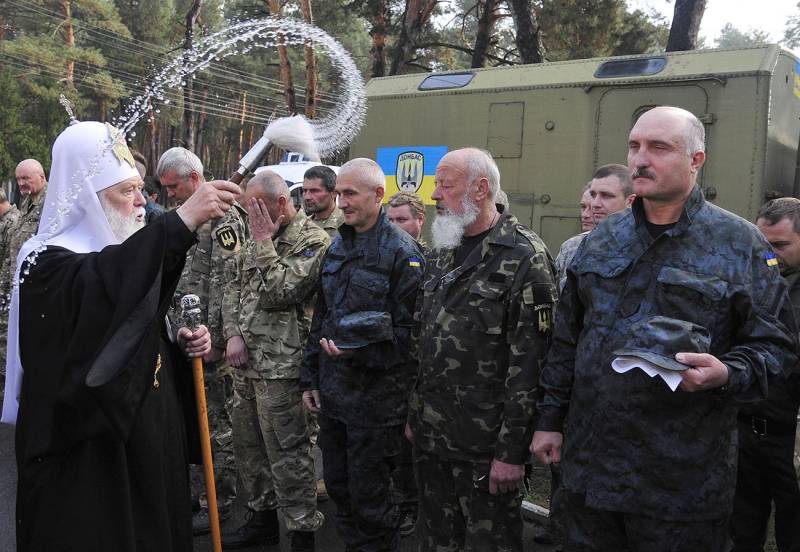 But today it is already clear that Moscow is getting stronger every year, and very soon the political situation in Kiev may change again. What in this case to do Denisenko and Co.? After all, during and after the second Maidan, they are so "famous" that it is unlikely that it will get away with it. In Ukraine, the reverse rollback will take place, and the priests of the UOC-KP are somehow not used to living under pressure. And on the bench, none of them want to.

I think it was precisely the understanding of the inevitability of future political changes in Ukraine and prompted Filaret to write that letter, which has already caused a heated discussion in Russia and Ukraine. Not from the good life and not under the influence of repentance, all this was written, but for the sake of trying to evade responsibility in the future.

Philaret is trying to keep a fork of solutions for himself, and therefore, most likely, negotiations, whatever they may be, will drag on. All this will be presented to the “patriotic” party as an attempt to peacefully agree with Moscow on the independence of the UOC-KP.

At the same time, there will be negotiations about anything in Moscow until such time as the political alignment does not determine the winner. If everything in the conflict in Ukraine remains as it is now, Filaret will come out of the negotiations without batting an eye, if Moscow wins, throws herself on her chest.

Of course, this can be called meanness and adaptability, but it was in meanness and opportunism that the schismatics of the UOC-KP lived all the 25 years of their existence, and therefore for them there is nothing new.

Whatever happened, but the fact of the incident speaks of fundamental political shifts in the situation in Ukraine. The strength of Moscow is growing, and no one is trying to challenge this. Filaret and the priests of the UOC-KP caught these changes and rush to protect themselves for the future.

PS I am now interested in something else: how about this news will the nationalists react? They can force Philaret to abandon his plan. They can do it. It will be interesting to watch all this.

Ctrl Enter
Noticed oshЫbku Highlight text and press. Ctrl + Enter
We are
Reports from the militia of New Russia for 27-28 September 2014 of the yearResults of the week. "Well, do not change me because of every idiot!"
Military Reviewin Yandex News
Military Reviewin Google News
100 comments
Information
Dear reader, to leave comments on the publication, you must to register.