Putin will teach the US and Israel a lesson in Arabic. "Surprises" are just beginning 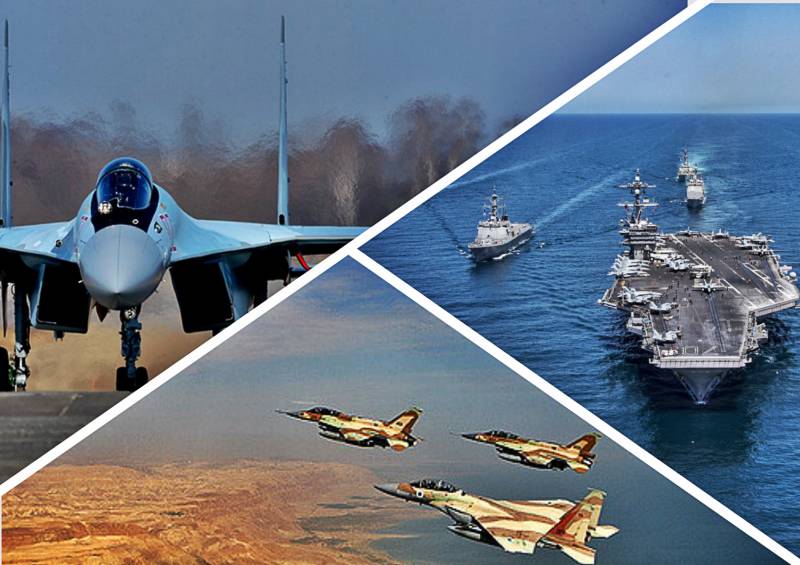 The recent developments in the front-Asian conditional theater of military operations continue to please with their scale and military-political significance. Indeed, by and large, the operational-strategic picture observed today on the Syrian theater of operations, as well as in northeastern Africa, has become the fruit of the exceptional abilities of representatives of our foreign and defense departments in terms of transferring any negotiations to a Moscow-profitable channel. Moreover, the overall geopolitical situation in the Middle East continues to work in our favor, where several Arab states, located in the Near East and northeast Africa, continue to suffer from the fault of the Israeli and American sides.

One of the main victims of Tel Aviv’s and Washington’s anti-Iranian “cunning plan” was the Sunni state in northeastern Africa — Sudan, where, under the pretext of Khasthom’s support of the Hamas movement (including the licensed production of the first modifications of the Shymkhab production complex to transfer This organization), the Israeli Air Force (Hel Haavir) conducted a strike operation against the enterprise. Also for more than 30 years, incumbent President Omar al-Bashir and the Sudanese Armed Forces are facing serious military support for militants from the pro-American Sudanese Liberation Movement, Justice and Equality Movement, and the so-called Darfur rebels from Chad, Eritrea and Western countries. Obviously, after the construction of a large naval base of the Russian Navy in Port Sudan, protected by several echelon defended missile lines, as well as motorized rifle subunits, the desire to violate the airspace of this country, to launch missile strikes by the forces of the Israeli Air Force the recruitment of rebel formations will no longer arise. The very same base, along with the Chinese naval base Djibouti, will be an excellent A2 / AD zone to completely limit the actions of American carrier-based strike groups trying to quickly penetrate the Mediterranean through the Red Sea and the Suez Canal.

We partially considered the moments connected with the base in Port Sudan in our previous work, today we will focus on the return to the Middle East round of the Great Game of Egypt, the actions of which again inspire well-founded fear in the especially “hot heads” of the Jewish state. As it became known today, the unofficial visit of the delegation of the Russian Defense Ministry on board the IL-62M to Cairo last week was associated not only with the warning of Abdul-Fattah al-Sisi about the imminent appearance of a new military facility on the Red Sea coast in Sudan, but also with a more important military-political event of regional significance. It is about reaching an agreement between Moscow and Cairo on the use of tactical air bases in Egypt aviation Aerospace Forces of Russia. The draft agreement, designed for a 5-year period, already signed by Prime Minister Dmitry Medvedev on November 28, was published by the Russian Government a day later, and was not accompanied by any comments from senior officials of the Egyptian defense department. Therefore, everything is already predetermined.

It is known that back in the mid-50s. The twentieth century, during the Suez crisis, when Egypt was subjected to Anglo-French-Israeli aggression, at the request of then-President Gamal Abdel Nasser, a limited military contingent of the USSR Armed Forces was deployed, represented mainly by instructors on the use of MiG fighters, IL-28 front-line bombers and tanks T-34, as well as other specialists for training engineering units, etc. Later, starting in October 1967, after the defeat of the Egyptian army by the Israeli Armed Forces, Cairo received another 60 Su-7 fighter-bomber from the Soviet Union, a hundred MiG-21F-13 fighters, as well as 50 twin-engine MiG-19s. In the same year, at the request of President Nasser and the Government of Egypt, a consolidated military formation of the Soviet troops was sent to a strategically important Middle Eastern state, which throughout the War of Attrition (low-intensity Egyptian-Israeli conflict from 1967 to 1970) provided significant engineering and technical support of the Egyptian army, which ultimately allowed the Egyptians to prove themselves more technically during the “Doomsday War” (1973), despite the final defeat. After the Doomsday War ended, the personnel of the USSR Armed Forces were present in the conflict zone only within the framework of the UN peacekeeping contingent in the Middle East (UNEF II).

Therefore, the current agreement on the use of Egyptian airfields by tactical fighter aircraft of the Russian Air Force marks the almost complete restoration of Moscow's presence in the Eastern Mediterranean and the Middle East. In particular, the presence of high-precision Su-34 front-line fighter-bombers and Su-30SM multi-purpose fighters at Egyptian airbases makes it possible to form long-range anti-ship and anti-aircraft A2 / AD lines that block access to the ships of the US Navy, the United NAV, as well as anti-submarine and tactical aviation of the North Atlantic alliance. The long-range approaches cover not only the Russian military facilities on the territory of Egypt, but also the infrastructure of the TAPP (logistics center) Tartus, as well as the air base of Khmeimim. Control over remote areas of the aerospace space (at times of increasing tension in the region) over the Mediterranean Sea will be carried out by operators of aircrafts DRLOiU A-50, escorted by links Su-30SM or Su-35S with AvB Khmeimim. Air radars A-50U will operate precisely from Syrian airfields, since the aircraft of the Russian Airborne Force are missing in the document on the use of the infrastructure of Egyptian air bases.

Secondly, the regular presence in Egypt of tactical aviation of the Russian Aerospace Forces (with the possibility of basing naval anti-submarine aircraft Il-38N) and other auxiliary means of optical-electronic, electronic and hydroacoustic reconnaissance, will make it possible to suppress attempts to penetrate into Egypt by special forces of the United States and Great Britain ("Navy Seals", SAS, etc.) by means of compact high-speed boats "Cyclone" , inflatable rubber boats CRRC, hovercraft, or underwater mini-submarine modules SDV, operating from unified Dry Deck Shelter docking cameras, adapted for use on modernized multipurpose nuclear submarines of the Los Angeles class and ultra-quiet nuclear submarines class "Virginia". It is these funds that can be used by the US Navy to try to blockade the Suez Canal and the Port Sudan naval base in the Red Sea.

Thirdly, the deployment of additional fighter squadrons or even air regiments of the Russian Aerospace Force also in Egypt can have a sobering effect on Israel before developing any large-scale force actions against the Armed Forces of Lebanon or Syria. Fully controlled by the Russian military aviation, neutral airspace, located to the south of Cyprus, will be a powerful deterrent to command Hel Haavir. As for the direct benefit for the situation in Northeast Africa from the Russian presence in Egypt, it will undoubtedly be at the level of benefit from the base in Port Sudan. This is a reduction in the number of Islamist groups on the Sudanese-Egyptian border, and a lower likelihood of a conflict arising on the basis of the struggle for water resources of the Nile tributaries. The return of Russian influence to the Middle East on the scale observed today (from Eritrea to Damascus) finally nullifies the “key effect” from the new stages of the old American plan, codenamed “Rozhava”, the goal of which is to divide Front Asia into a mass of under-state factions of Sunni and Shiite origin (according to the “Balkan scenario”). They will be able to divide the region, while the strategic sectors of control in the area of ​​the most important Suez Canal will remain in the hands of Moscow.

Ctrl Enter
Noticed oshЫbku Highlight text and press. Ctrl + Enter
We are
"Trouble" of the Promised Land. African immigration to IsraelFragile peace on the land of ancient Nubia
Military Reviewin Yandex News
Military Reviewin Google News
197 comments
Information
Dear reader, to leave comments on the publication, you must to register.