"Michael". The March offensive of the 1918 Kaiser army in France. Part of 3

December 7 2017
22
E. Ludendorff found the direction of San Quentin - Amiens most appropriate, both for strategic and tactical reasons. In the region of S. Kanten, the English front was the most sparse, and the terrain did not represent any special tactical obstacles and was passable in early spring. The direction to Amiens ran through the recent battlefields on the Somme River - but this circumstance was not recognized as a serious obstacle.


In strategic terms, the proposed direction led to the junction of the British and French armies and made it possible to separate them and then, resting the left flank in the Somme, to throw the British in the north-west direction - to the sea. The plan promised the greatest strategic success and put the front breakthrough in optimal tactical conditions - and the last E. Ludendorff attached great importance.

These considerations, first revealed at a meeting in Mons, formed the basis of the plan for the upcoming operation.

At the end of November, 1917 was followed by a surprise attack by the British at Cambre and a counteroffensive by the Germans. The battle allowed to formulate a number of important tactical conclusions.

Now it became obvious to the Germans that a plan for a serious offensive operation cannot be built on the breakthrough of only one sector of the enemy front and on the offensive in only one direction. Only a combination of alternating breakouts could shake the positional front. Therefore, in December 1917 of the year, the High Command sends its considerations to the army groups, outlining the following areas of attack:

But since the focus was on defeating the British, the most important importance was given to S. - Kantensky ("Michael") and Hypersky ("Mars") breakthroughs. The latter was supposed to start on 14 days later.

The purpose of "Michael" was to straighten the arc going at Cambray and the wide breakthrough of the English front in the region of S. Kantin. It was supposed to divert the reserves of the British from Flanders and, by separating the British and the French, allow the entire English front to be pushed back to the sea.

The purpose of "Mars" was to break through the deprived reserves of the English front in Flanders - in the direction of Gazebrouck and in covering its left flank in order to cut off from the coastal bases.

Thus, the German command refused to attack only on one sector of the front.

The second equally important conclusion was in assessing the importance of the tactical element - in the positional war the latter prevailed. The strategic importance of the direction could no longer serve as the sole criterion for its choice - if the positional conditions, the massing of the enemy’s forces and the concentration of its reserves did not allow to count on the success of the front breakthrough. Under the influence of this condition, the idea of ​​the need to break through the front, where it is simply possible, is characteristic of a positional war.

“Tactics must be put above pure strategy,” said E. Ludendorff. And the bitter need to take into account the realities of positional warfare could not but affect the development of the operational plan. She forced E. Ludendorff to finally choose the front north and south of S. Kantin for the first strike - representing the enemy’s weakest position in tactical terms.

According to the Germans, the front from Arras to the Oise River was occupied by two British armies: 3 (from Arras to Guzokur; in the first line of 8 and in reserve 7 divisions) and 5-I (from Guzokur to Uaz; in the first line of 17 and in reserve 6 divisions). Total on the front from Arras to r. The Oise were 38 English divisions, of which 6 - cavalry. In the general reserve in this sector, only about 6 divisions were supposed, while to the north, according to the Germans, the total reserve was up to the 15 divisions. Thus, the section of the 3 and 5 of the British armies was the weakest point of the enemy. He was the same with respect to fortified positions that did not have any tactical advantages. The front of the 3 Army, however, was stronger fortified, having two well-equipped lines: the first and the line of support, but positions on the front of the 5 Army, taken by the British from the French only in January of the 1918, were still unfinished. The line r. Was also poorly equipped. Somme.

“Tactical conditions and in the first place weak enemy forces,” wrote E. Ludendorff, “and forced me to choose the S.-Kanten direction for the first decisive attack.”

December 17 was followed by an order to occupy the new 18 army of infantry general O. von Gutier (who was known as the breakthrough specialist after the Riga operation) of the front south of the 2 army - between the Ominion creek and the Oise river, i.e. on the S.-Kanten direction. 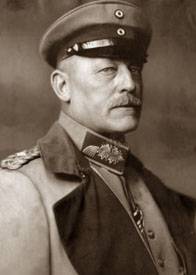 24 On January 1918, an order was issued to occupy the new 17 army (before that - the 14 army on the Italian front) of the infantry general O. von Belov of the front between the 6 and 2 armies from Lens to Cambrai. 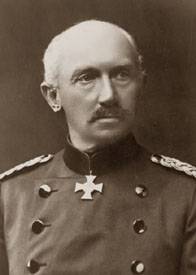 At the same time, the directive was followed, according to which the operation “Michael” of the 17, 2 and 18 armies on the Croisil-La Fer front was considered the first stage of the strategic offensive operation on the French front.

The task of "Michael" was to a wide breakthrough of the English front in the region of S.-Kanten - in order to cover the right flank of the British and throw them in the north-west direction. From the west and south-west, this maneuver was to be provided on the line r. Somme and the Crozat Canal. At the same time, the operation was to divert the reserves of the British from the region north of Arras.

18-I army was subordinated to the front of the German Kronprinz, which predetermined the operation at the junction of two army groups. The consistency of the operational actions from this should undoubtedly suffer. But E. Ludendorff was on the view that, having subdued the advancing army to two commands, the Main Apartment ensured its influence on the course of the operation. Obviously, in addressing this issue, dynastic interests were important: According to E. Ludendorff, the Main Apartment wanted to involve the Crown Prince in the victorious and decisive operation.

So, the main objective of the offensive "Michael" was to reach the line of the Somme River for further throwing the British in the north-west direction and coverage of their left flank. But the grouping of forces did not fully comply with the accepted plan. After all, the seizure of the line of the Somme River was only a means of securing the left flank of the armies, which then had to make a very difficult passage with the left shoulder in the direction of Albert - S.-Paul - to achieve the ultimate goal. But for the implementation of the secondary strategic task, half of the forces concentrated for the “Michael” offensive were intended - the left flank of the 2 Army and the 18 Army, which were aimed at the line of the Somme River.

Only the forces advancing north of the Somme to the Croisil-Perron front were the forces, that is, The 17 Army and the right flank of the 2 Army were aimed at the main line. Moreover, in the initial position, these armies, thanks to the front line, bent from the north-west to the south-east direction, had to then make a stop with their left shoulder almost at 90 ° - which was a very difficult maneuver in the conditions of combat contact with the enemy.

Thus, the grouping of forces adopted in January was in conflict with the adopted plan of operation.

The command of the 18 Army didn’t put up with the limited task assigned to it - to reach only the line of the Somme River and the Crozat Canal, where it had to provide the left flank of the 2 and 17 armies.

Already in January, the Chief of Staff of the 18 Army outlined his considerations to the Army Group headquarters - that the attack southeast of S. Kanten is tactically the easiest, and the 18 Army will reach the line p in two days. . Somme and the Crozat Canal. The command of the group supported these considerations, pointing the Headquarters to the desirability, in case of successful development of the strike of the 18 Army, to attract the right-flank divisions of the 7 Army to the attack, going for the Somme.

March 3 E. Ludendorff personally replied to the Crown Prince that “with a quick and successful attack, it is desirable that the left wing of the 18 Army advance beyond the channel, for which the largest number of 7 army divisions should be concentrated for transfer through La-Fer ". Thus, the German command, foreseeing the possibility of a great tactical success with S. Kantin, refused from the limited task assigned to the 18 Army and envisaged its advancement beyond the Crozat Canal in the western, and possibly in the south-western, directions. At the same time, the center of gravity of the operation noticeably shifted to the south. Here S. Kantin concentrated half of all forces assigned to the offensive.

On the eve of the offensive, March 20, E.Ludendorff, in a telephone conversation with the Chief of Staff of the Kronprinz Bavarian Army Group, explained that, if the breakthrough in the center was successful, he intended to give the 2 Army direction to Dulans-Amiens and then turn to the south-west. 17-I army had to continue the offensive south of the river. Scarpa alone. These considerations broke the original plan of the operation - instead of developing a breakthrough in the north-west direction, an offensive in the south-west direction was obtained. Tactical considerations again played a dominant role — the German command planned to develop a breakthrough in the direction where tactical circumstances were more favorable.

Strategically, the essence of the operation became uncertain - after forcing the Somme River and the Crozat Channel, the approach of the 18 Army became eccentric with respect to the northwestern approach of the 17 Army and part of the 2 Army. Expanding tasks and increasing forces (by attracting the 7 army in the southern S. Kanten area), the German command left the position of the 17 army unchanged — whose actions, from a strategic point of view, were of decisive importance. The 17 Army denied the extension of the front to the north requested by its command, under the pretext of the lack of sufficient forces. Everything again came up against tactics - on the front of the 17 Army, the massing of enemy forces and the terrain conditions did not promise such an undoubted tactical success.

The grouping of forces corresponded only to tactical conditions and from the very beginning made the possibility of strategic development of the operation dubious. And the main purpose of the operation - the decisive defeat of the British by dropping them in the north-west direction - remained only an abstract idea. 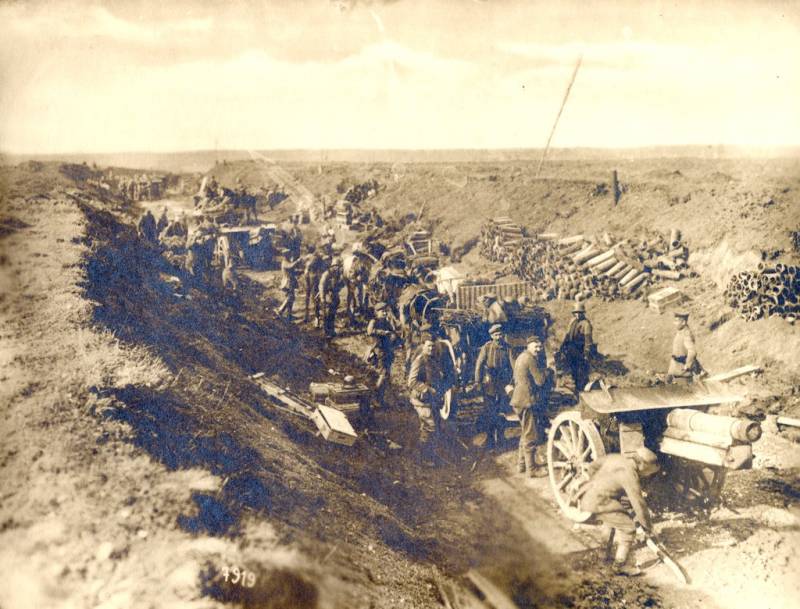