December 4 2017
61
The beginning of the 11 century is the peak of the glory of the Byzantine era of the Macedonian dynasty. After the victorious campaigns of Emperor Vasily II (years of rule - 976 - 1025), the Eastern Roman Empire regained its sovereignty over a number of territories - from the Armenian mountains to the Italian Peninsula. But Basil failed to conquer Sicily - even at the end of his reign, he was close to the Sicilian campaign.

We briefly wrote about the protospafarii, the magister and stratig of the empire George Maniak (Rusy and Varang. Part of 2 ; Against an internal enemy. Security and Police Service of the Varangian Guard ; Ax in the hands of the emperor. Battletrack Varangi. Part of 1). Now let's take a look at his army - the army, with which he made his victorious campaigns in 1031 - 1042. During these years, the troops of G. Maniak took Edessa, conquered Sicily, suppressed Peter Delyan’s Bulgarian uprising, and successfully fought the Normans in Italy.

The main pictorial source of the epoch is the richly illustrated work of the Byzantine chronicler John Skilitsa, containing images of battle scenes, weapons and equipment, banners, siege machines, etc. Although I. Skilitsa's activity falls on a somewhat later historical period, Byzantine conservatism, which went back to to the old Greco-Roman tradition, allows us to recognize the miniatures of his work as the most important primary source. The artists were personally acquainted with the weapons and military equipment of the era, or used the details of previous periods, they copied from earlier images. Elements of weapons and armor, as well as military clothing, mentioned in literary sources, correspond to the materials of graphic sources of that period.

A series of tablets, published in the work of Dr. R. D'Amato, published in 2005, is extremely interesting. They recreate (based on the materials of I. Skilitsy, miniatures, and other artistic and visual sources of the 11 century) the appearance of the warriors of G. Maniac of the period of the conquest of Sicily. The material is also interesting from a source study point of view - in particular, it analyzes the features and degree of reliability of graphic sources from the chronicle of I. Skilitsa. Tablets, with appropriate comments, we will present to the reader. The work of R. D'Amato is also an illustration of the fidelity of our conclusions, published in a series of articles on the Varangian Guard of Byzantium that were published on VO (a bit more of this later).

In 1038, the pro-Raphafari Georgii Maniak, who distinguished himself during the Eastern Wars, was appointed emperor Michael IV by the Paflagonts of the Italian katepan, while at the same time conferring the title of stratigus. The katepana was pledged to conquer all of Italy by winning Sicily from the Arabs. Already by this time, G. Maniak was considered the most brilliant general of his time: as already noted, he had an excellent reputation in Syria, having won the important stronghold of Edessa for the empire. Now it is the turn of Sicily.

Army G. Maniac wore complex and includes in its membership the regular troops of themes of Calabria and Macedonia, 500 300 Armenian infantry and cavalry under the command of Katalakona Kekaumenos and mercenary troops Lombard and 300 - 500 hired Norman knights under the command of L. Hardouin, Drogon brothers and William (sent by Prince Salerno - vassal of the Empire). In addition, as part of the army of G. Maniak, a division of the best Guards regiment of Byzantium - the Varangian Guards fought, consisting of Russians and Scandinavians and headed by the legendary Harald Sigurdson.

Earlier, in one of the anonymous comments to our articles on the battle path of Varangi, someone tried to mix up the concepts of “Scandinavian mercenary in Byzantium” and “Varangi warrior”, noting that Harald is only the commander of the ship, the concept of an officer in Byzantium was absent, etc. t. n.

We have repeatedly referred to the fundamental work of Academician VG Vasilyevsky, confirming our findings. A series of works presented in Western historiography confirms them. Among the latter, Dr. D'Amato, who noted that Harald Sigurdson was not some kind of “ship commander” and “leader of a group of mercenaries”, but the OFFICER (this term is used in D'Amato's work), heading the DIVISION (ORDER) from Varangian Guard - an elite regiment of the empire. The unit was staffed with RUSSIANS and SCANDINAVES (that is, Varyago-Rus, about whom we also wrote earlier).

G. Maniak's forces acted brilliantly in Sicily, capturing 13 cities - among them Syracuse, Messina, Rometta, and others. In 1040, the united Arab army of Abd-Allah, which, according to the most modest estimates of 60000, suffered a crushing defeat in a field battle at Traina . Actively using the “eye, speed and onslaught” G. Maniak completed the campaign in 1041, having conquered Sicily in less than 3.

The career of a brilliant general was destroyed by envy and intrigue.
Initially, the Normans left his army, dissatisfied with the division of trophies. Then there was a quarrel with the commander fleet Stephen, the brother of the emperor. As a result, G. Maniak was removed from command, accused of treason and fettered to Constantinople.

Soon he was freed by the new emperor - Michael V - and returned to Italy as commander-in-chief of the imperial troops on the peninsula. But after a victorious campaign against the Apulian rebels, he was again slandered (his wife's lover) and recalled Constantinople. Mr. Maniak’s patience has burst - he proclaims himself emperor and finds death in 1043 on the battlefield.

One of the Sicilian castles at Cape Ortygia near Syracuse still bears the name of one of the most prominent leaders of the Byzantine Reconquista, the giant (in the truest sense of the word) George Maniac.

So what were the appearance, weapons and equipment of the fighters of the army of G. Maniak? 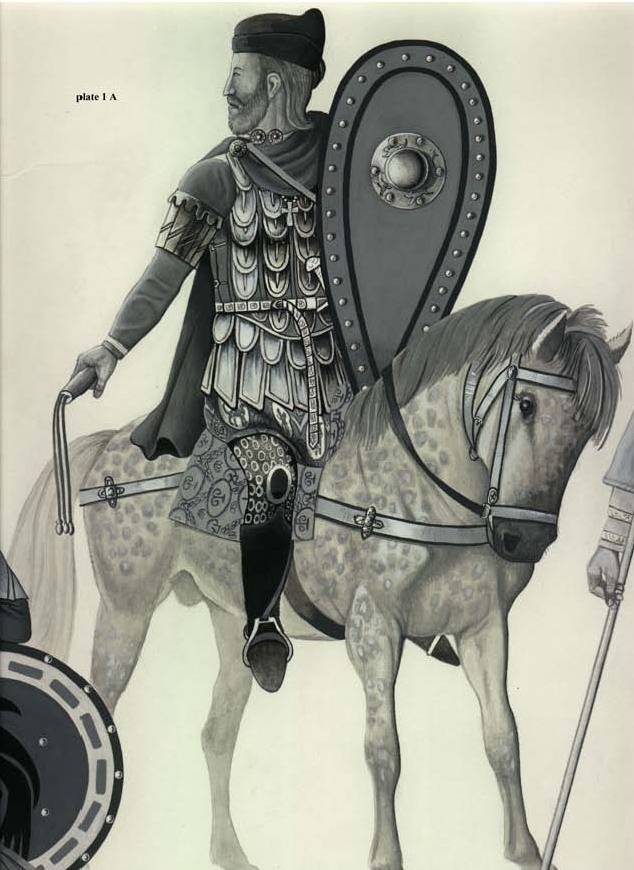 Based on the miniatures of labor I. Skilitsa (scene of the Battle of Traine), the tablet recreates the figure of G. Maniak. Headdress, raincoat, shield field - red. A stratig could wear lamellar (combat) armor (as in the illustration) or the so-called anatomical cuirass (usually - ceremonial armor). Lamellae could be made of metal, horn, or boiled leather. Lamellar armor was strung with leather straps. Could be used and variations - for example anatomical breastplate and scaly (or lamellar) armor. Thus, a representative of the senior commanders of the 11 century Byzantine army could look 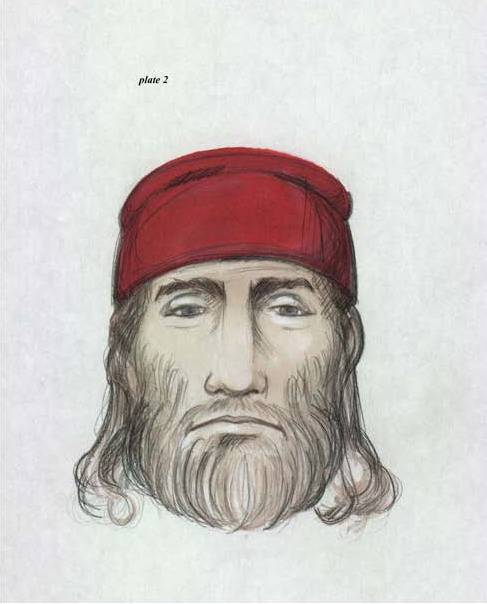 Recreated on the basis of materials I. Skilitsy, descriptions of M. Psella and other sources. G. Maniak preferred to wear a hat presented on the tablet. Thick felt hats appeared in the wardrobe of the Romanian infantryman from the era of the basilica Nikifor Focha. They were also used as a cap comforter by cavalrymen. The red color of the cap is not a guess. That is how it appears on visual sources. Red has traditionally been the favorite color of Roman military leaders and officers. Cap G. Maniaka - uniform headdress. Exactly the same we see on the heads of other Byzantine commanders, including the fleet commander. 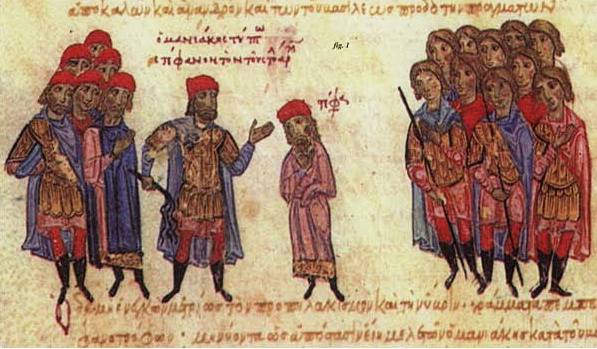 Maniak and his officers (left). Clothing, armor and hats of the Byzantine commanders. The officer in the center is holding battle-flail (battle chain) - weapon, especially convenient for use by the rider. On the right are the imperial guardsmen. The color of the cloaks of the guards regiments (tagmat) was derived from the color differences of circus parties of Constantinople and was red, blue or green. Miniature. I. Skilitsy. 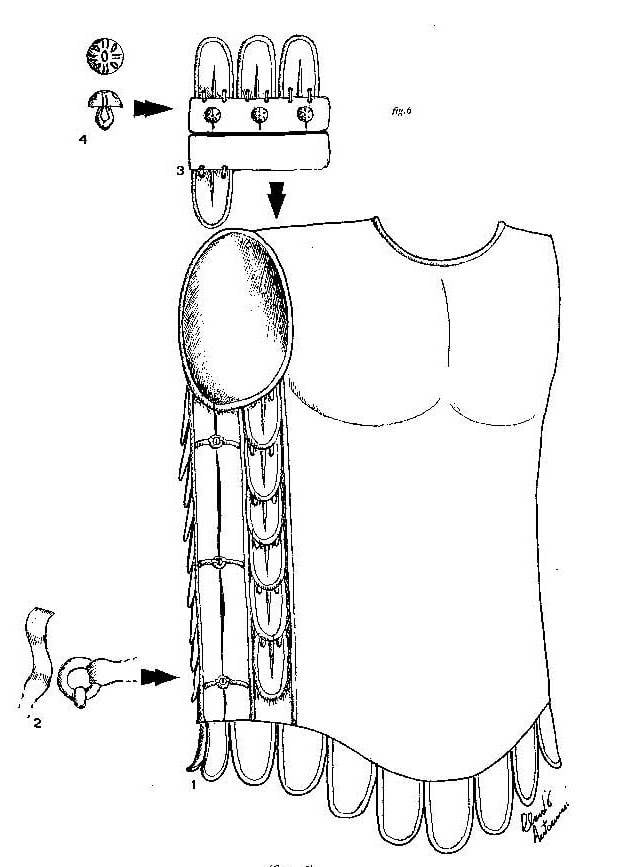 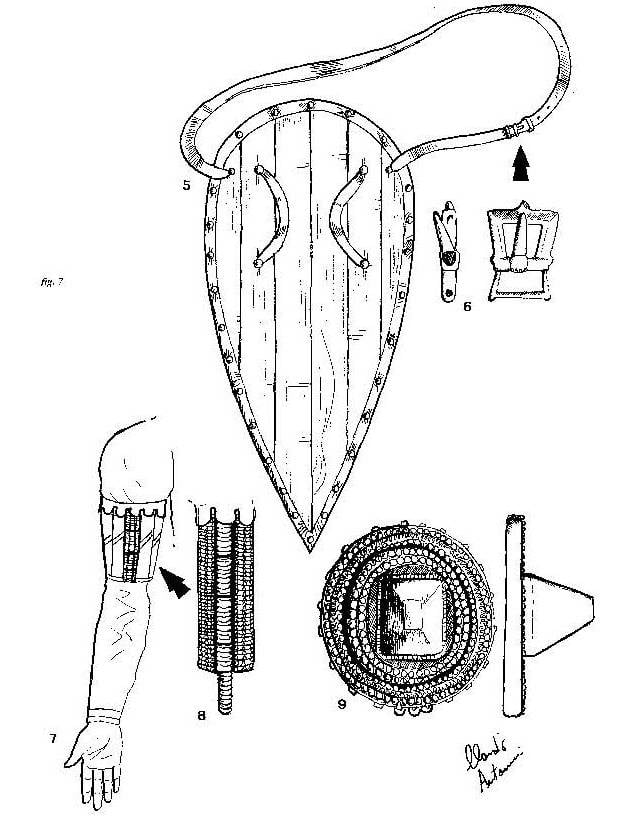 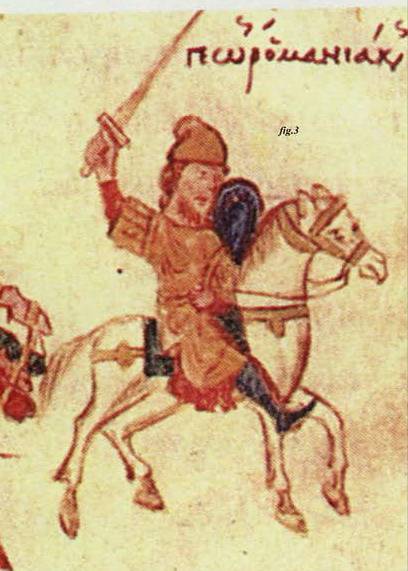 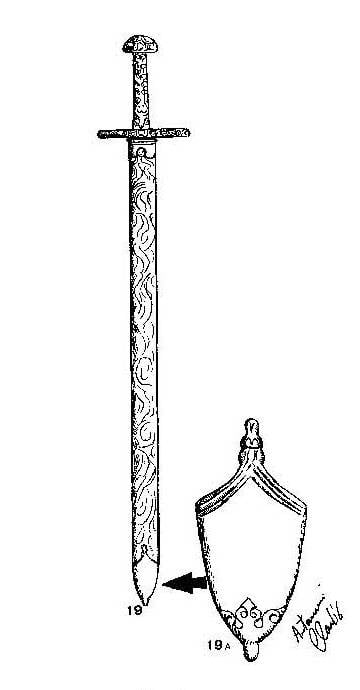 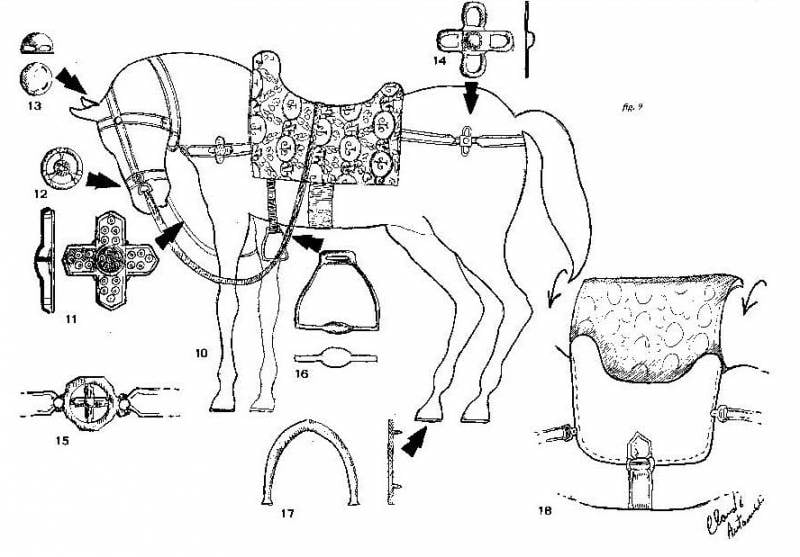 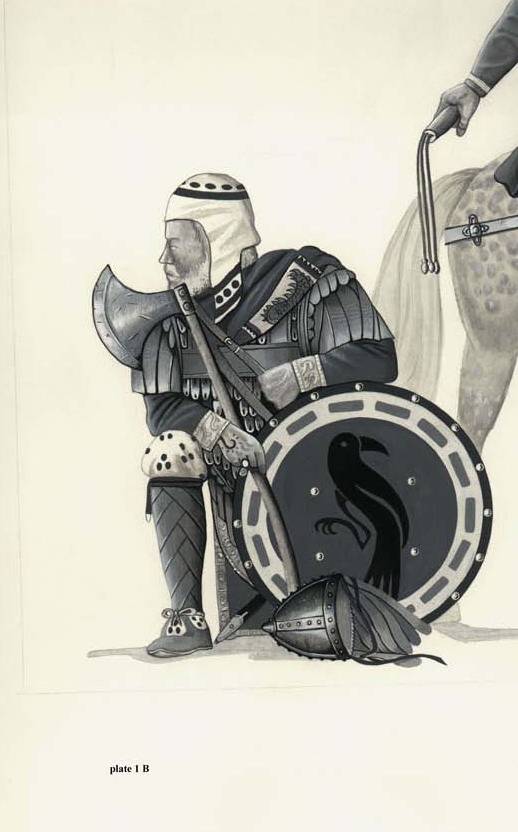 Officer of the Varangian Guard.We wrote about the equipment and armament of the Varangus. The author of the tablet focuses on the fact that 23-year-old Harald Sigurdson, depicted in the uniform of an officer of the Byzantine Empire with features assigned to the Varangian Guard, became the prototype for the illustration. The reconstruction of the appearance of the Varangian officer is based on the image below in the Munich Glyptotek. According to the source, Harald had a full body protection. Pay attention to the characteristic segmented helmet (dark blue color is indicated by sources for the entire Harald unit in Sicily) with a pterig barge in the form of officers, an officer’s raincoat with a rank designation, a cap of a cockle (she is also a balaclava); emblem in the form of a crow. We wrote about these details in articles devoted to the equipment and armament of Varangi (Guards axes. Armament, equipment, uniforms Varangi. H. 1 ; Hiking cataphracts. Armament, equipment, uniforms Varangi. H. 2 ; "Black Raven - Worry Me". Armament, equipment, uniforms Varangi. H. 3). Moreover, the author of the tablet, referring to the work of A. N. Kirpichnikova, speaks of the Russian origin of the cockle. Marks of rank were applied to the front of the lamellar officer armor. The color of the lamellas is a combination of gold and blue. A characteristic piece of equipment is a kind of unloading - so-called. "Varangian bra".

Officer of the Varangian Guard. Munich Glyptotek. The illustration was used by us in one of the articles on Varange. 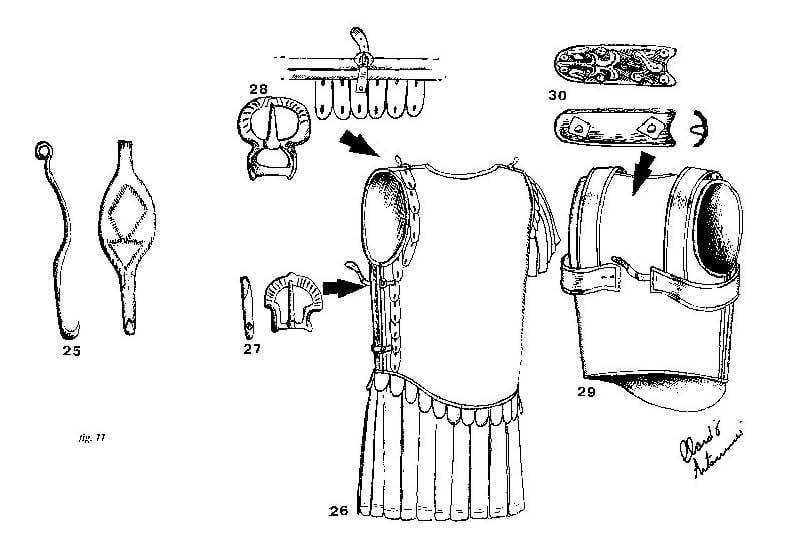 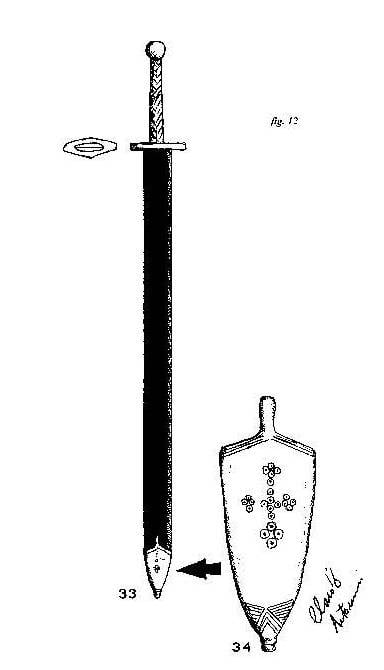 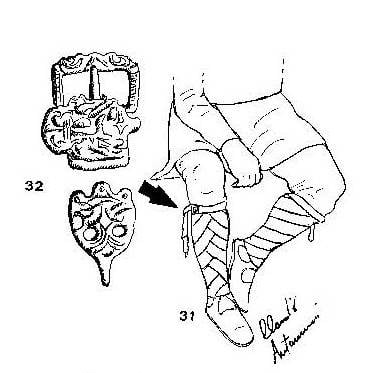 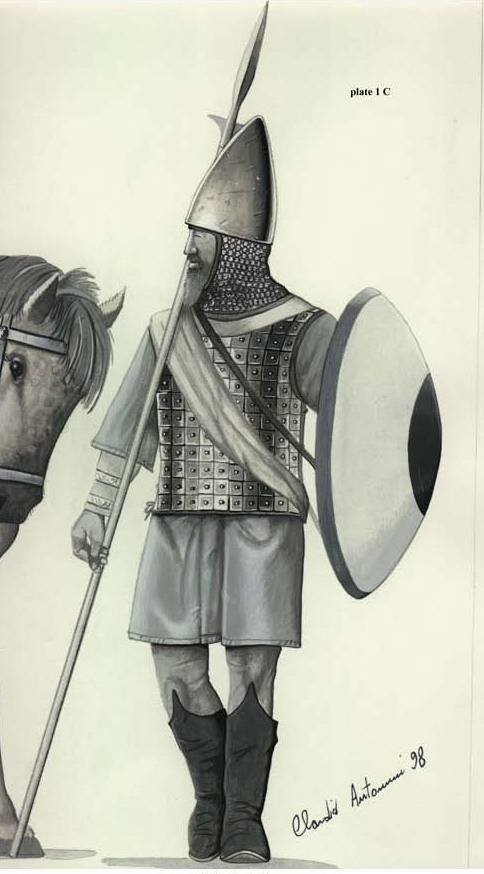 Lombard infantryman fema Langobardia. On the head there is an all-metal helmet, body protection - a scaly shell made of 16-ti rows of scales of golden metal. Fastening scales to the skin or linen fabric - reconstructed in accordance with identical samples A. N. Kirpichnikova. The spear is equipped with "wings". The surface of the round shield is olive-green, the center is red.

Image in the Cathedral of Pisa (copy of the Kapuan image 1059 of the year). 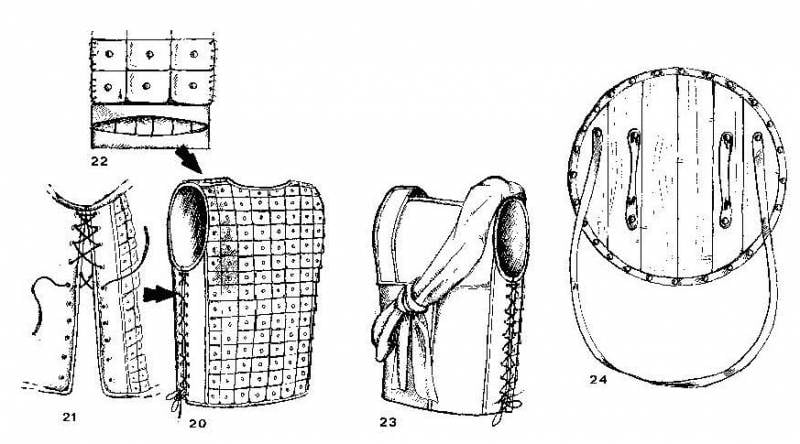 This was how the soldiers of the army of George Maniak looked during the Sicilian drift, the army that the talented commander of 10 spent years from victory to victory.