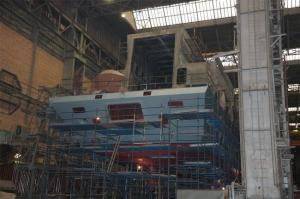 A roll-out of the “Resistant” corvette from the slipway will take place in the first days of May, after which it will be put into the dock for mounting the bulb fairing. Launch of the Corvetry "Resistant" is scheduled for May 21. Within six months, the ship will be completed afloat, and from January 2013, the mooring will begin on the “Rack”, and then - factory running and state trials. Upon completion of the tests, in November 2013 of the year, the “Resistant” will be handed over to the customer - the Ministry of Defense of the Russian Federation, the press service of OJSC North-West Shipyard reports.

In May, mooring tests will begin on the head frigate of Project 22350 Admiral Fleet Soviet Union Gorshkov ", which is now completing preparations for receiving power from the shore to the main switchboard of the ship. The ship will be handed over to the customer on time - in November 2013. And a year later, in November 2014, the Ministry of Defense will receive the first production frigate this project "Admiral Kasatonov."

In November of next year, Severnaya Verf will transfer to the customer another military unit - the special purpose vessel of the 18280 project (developed by the Iceberg Central Design Bureau) Yuri Ivanov. The launch of this order for water is scheduled for the beginning of August 2012.

The second serial corvette of the 22380 project, “Boky”, which is now located near the extension wall, was presented to the Baltic Fleet Commission in mid-March and declared ready to be occupied by the crew. Today, April 2, mooring trials began at Boykoi. In July, the ship will go to sea to conduct factory running and state tests. In accordance with the approved construction schedule, the first hoisting of the flag and the transfer of the corvette to the customer will take place in November of this year.

Severnaya Verf is building all ships in accordance with the construction schedules approved by the customer, the Ministry of Defense of the Russian Federation. To date, Severnaya Verf is the only enterprise that has revived the serial construction of combat surface ships. This is confirmed by the fact that in February, the Northern Shipyards held practical exercises for the senior staff of the RF Glavkomat to familiarize themselves with the experience of the serial construction of warships. "This is a sign of the highest appreciation of our enterprise by the government of the Russian Federation, the Ministry of Defense, the Main Committee of the Navy. The fact that the Russian government accepted the Northern Shipyard for the resumption of serial construction of ships of the first and second ranks is the result of many years of joint work of specialists of the Ministry of Defense, employees of the Main Board of the Navy and our shipyard ", - said the general director of OJSC North-West Shipyard Andrei Fomichev.

In connection with such a tense production program, Severnaya Verf is preparing to wind down a non-core business: over the next two years, all the berths that are now leased will be used for their intended purpose - to complete the construction of ships and vessels.