December 1 2017
11
To fly several thousand kilometers and deliver a payload to the discharge area, a long-range bomber must have huge fuel tanks. Thus, Tu-95 family aircraft take on board up to 80 tons of fuel, and the capacity of the supersonic Tu-160 fuel system exceeds 170 thousand liters. For the preparation of such aircraft for departure, special fuel tankers are required that can deliver the maximum amount of kerosene to a vehicle in one flight. The original solution to such problems was proposed in the domestic project ATZ-90-8685c.


As of the mid-eighties, the USSR Air Force had at its disposal several models of airfield tankers equipped with relatively large tanks. Taking into account the needs of existing aircraft, it was proposed to create a new car of this class that has significant advantages over serial models. At the same time, the assigned tasks should be solved due to the wide use of already existing products and components with a minimum number of innovations. 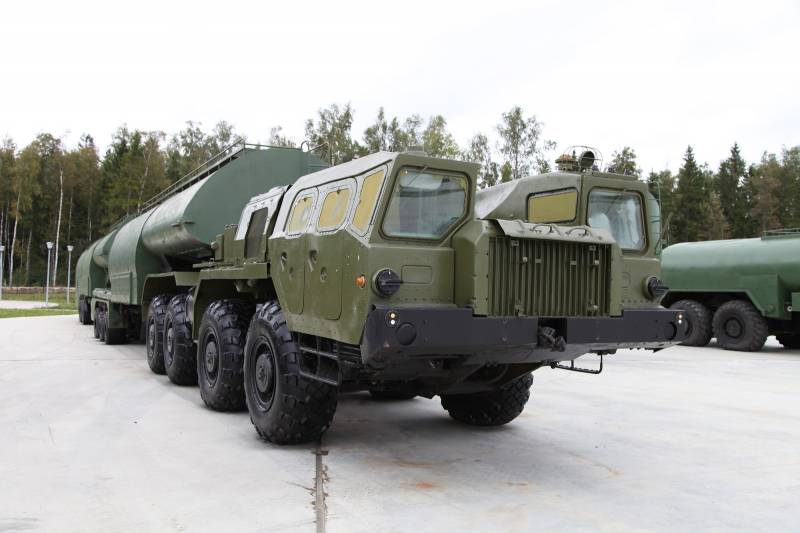 Soon, a project was created for a promising aerodrome machine, which received the official designation ATZ-90-8685c. Letters "ATZ" pointed to the class of technology - "avtotoplivozapravschik." The first two digits reflected the maximum capacity of tanks in cubic meters, and a four-digit number indicated the model of the main component of the complex. The letter "c" noted the articulated layout of the tanker. According to other data, it indicated the presence of the fifth wheel coupling on one of the semi-trailers.

In order to simplify mass production and operation, the ATZ-90-8685c project was based on commercial vehicle samples. Thus, the mobility of the entire assembly was to be provided by a MAZ-74103 type truck tractor. It was proposed to attach a pair of semi-trailers of the ChMZAP-8685 model with large-capacity tanks and a set of additional equipment for working with fuel. In fact, the new airfield tanker was supposed to be an existing ATZ-60-8685c type vehicle, supplemented with a second semi-trailer with a cistern.

The MAZ-74103 was a variant of the further development of the MAZ-543 (MAZ-7310), which was notable for its high performance. It was an eight-wheel all-wheel drive car with a distinctive two-cabin layout and central location of the power plant. The tractor was equipped with a hp 650 diesel engine. and hydromechanical transmission, which provided four forward speeds and two rear. Chassis has been strengthened in accordance with the increase in permissible loads. The load on the fifth wheel coupling was increased to 27 t. The payload capacity of the MAZ-74103 base train was determined in 57 t.

On the "saddle" of the tractor, the king pin of the ChMZAP-8685 front semi-trailer, which carries one of the tanks, was to be fastened. The ATZ-90-8685c tanker should have two semi-trailers with their own fuel tanks at once. To solve this problem, we had to use a pair of serial semi-trailers with the appropriate set of equipment. In particular, the front could not carry a large tank, and also needed its own fifth wheel coupling.

The front semi-trailer from the ATZ-90-8685c was a serial platform with three own axles. The front support platform of the semi-trailer, integrated into the design of the tank, was noticeably raised above the main platform. At the rear of the semi-trailer platform, at the level of the third axle, we have provided our own fifth wheel coupling for towing the second semi-trailer. The power set of the semitrailer was formed by the front and rear frame, as well as the tank body, which had sufficient strength.

The modified semi-trailer CHMZAP-8685, located just behind the tractor, received a special form of tank, determined in accordance with the existing requirements. The tank consisted of two large parts, different contours and sizes. Its front unit, located on the support site, was distinguished by a smaller height. The back, in turn, had the same width with a greater height. This element of the tank lay directly on the frame with the chassis. The curved rear wall of the tank was located at the level of the front pair of wheels, freeing up space for the installation of the second semi-trailer. 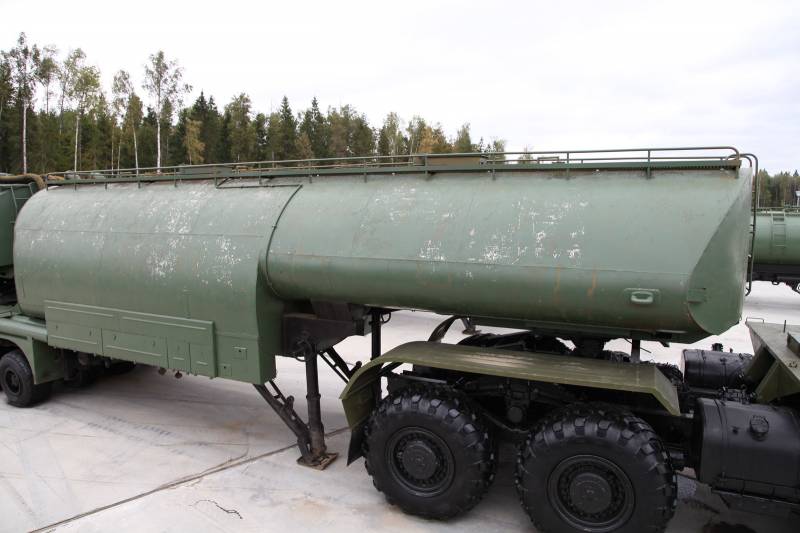 On top of the cistern, a platform was set up for work with the openings and sleeves. Access was provided by a front staircase. On the sides of the platform, next to the curved bottom of the tank, were boxes for transporting tools. On the rear platform with a "saddle", several longitudinal tubes were provided for transporting flexible hoses.

The second semi-trailer without significant changes was borrowed from the ATZ-60-8685 serial tanker. He also had a three-axle undercarriage and a raised front support platform with a king pin. The rear semi-trailer tank was equipped with a reduced front unit located above the fifth wheel hitch, and also had a large rear unit. In this case, the rear part of the tank was distinguished by a large length and volume. Above there was a platform for working with the mouths, on the sides - boxes.

The rear semi-trailer ChMZAP-8685 was equipped with a large stern overhang, inside which there was a variety of equipment for receiving and issuing fuel. There was also an autonomous engine that ensured the operation of all the systems of both semi-trailers. Access to the equipment was carried out through side and stern hatches. 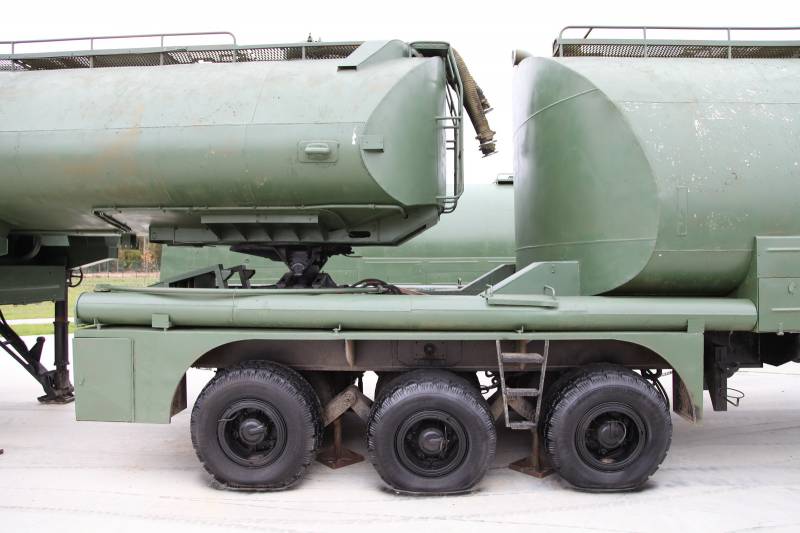 Running gear of the forward semi-trailer and means of articulation. Photo by Vitalykuzmin.net

The tanker was equipped with its own pump type TsN-240 / 140 driven by an existing engine. There was a filter separator with filtering accuracy up to 5 microns. Its characteristics made it possible to almost completely clean the fuel from free water. The filter had minimal electrifying properties, and was also equipped with a static electricity neutralizer. This allowed to solve the problem of fuel electrification on the way to the aircraft tanks. The fuel supply was monitored by an LV-150-64 meter.

The operational capacity of a pair of tanker tankers was 90 thousand liters. The distribution system, working with one sleeve, could give the consumer up to 2500 liters of fuel per minute. At the same time, the fuel did not receive a static charge and was almost completely purified from water. 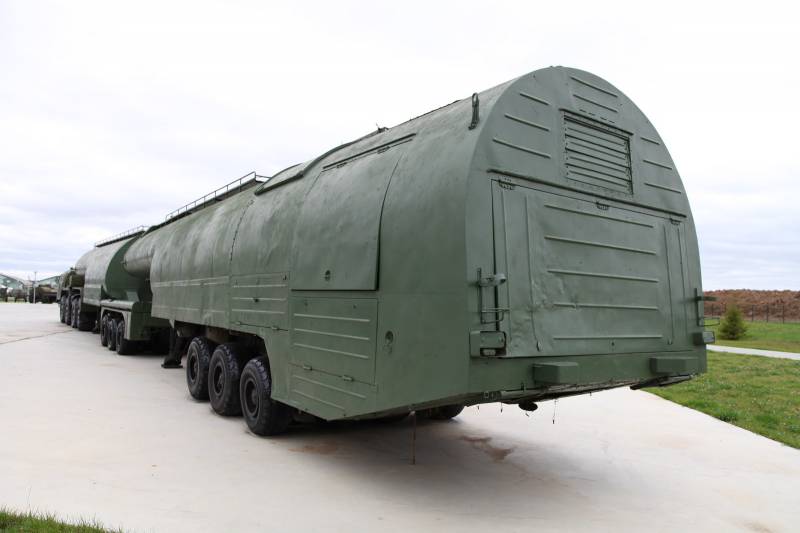 Back view. Photo by Vitalykuzmin.net

The applied equipment allowed the ATZ-90-8685c tanker to independently solve a number of tasks related to the transportation and delivery of fuel. He could autonomously receive fuel from a tank and fill his own tanks. Refueling of the serviced aircraft could be carried out both from its tank and from a third-party tank. The transfer of liquids from one tank to another without using own tanks was provided. There was the possibility of mixing different components in regular tanks for the production of various mixtures.

The airfield tanker ATZ-90-8685c was fully equipped and in working condition, it was distinguished by its uniquely large size and weight. These drawbacks, however, were fully offset by the amount of fuel carried and other performance characteristics. The possibility of simultaneous transportation of 90 cubic meters of kerosene with the subsequent transfer to a heavy aircraft favorably distinguished the new car from the existing analogues, which were completed with only one tank.

Despite its size and weight, the ATZ-90-8685c tanker could be transported by military transport aircraft. A tractor with two semi-trailers was placed in the cargo cabin of the An-124. Loading the car was carried out through the front hatch. After arriving at the aircraft, the tanker occupied almost the entire useful volume of the cargo hold and left minimal free space. To secure a large articulated vehicle inside a transport plane, a special mooring scheme was developed. 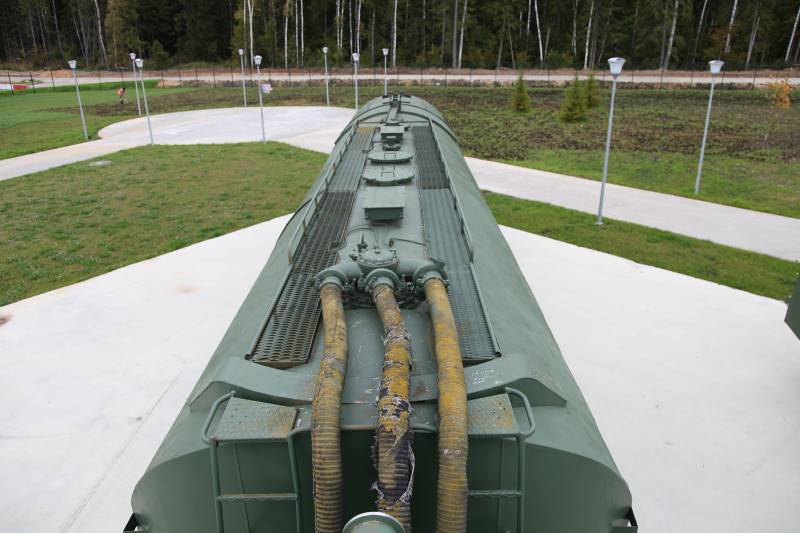 The upper platform of the rear tank. Photo by Vitalykuzmin.net

An experienced airfield tanker of the new model was built in the mid-eighties. After passing all the necessary tests, including with a military transport aircraft, and confirming the calculated characteristics, the car was recommended for acceptance for the supply of military air forces. The corresponding order appeared in 1987 year. Soon the industry received an order for the mass production of new equipment.

The release of tankers involved several organizations from different cities. For the release of the MAZ-74103 responsible Minsk Automobile Plant. ChMZAP-8685 semi-trailers ordered Chelyabinsk Machine-Building Plant car trailers. Production of some units and the subsequent general assembly of machinery were entrusted to the Mariupol enterprise “Azovobschemash”. The order for the release of ATZ-90-8685c machines appeared in 1987, and, apparently, the first serial tanker was soon released.

The exact number of serial tankers assembled in Mariupol is unknown. Production started not in the most successful period. stories Soviet Union, and therefore could not be truly massive. In addition, shortly after the collapse of the USSR, the production of equipment was discontinued. Thus military aviation could not get a large number of new tankers. 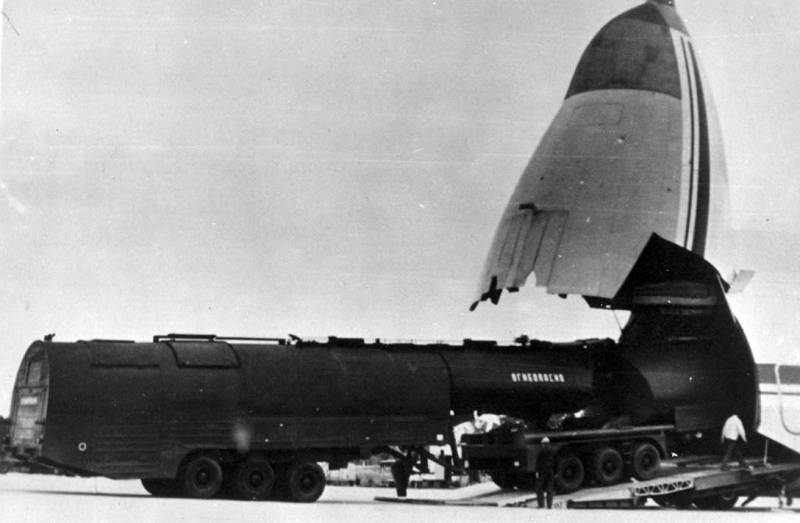 Already during operation, it was found that the ATZ-90-8685c machine has characteristic problems that most seriously affect the resource. The main disadvantage was the insufficient strength of the tank and semi-trailer connection. This unit was subjected to high loads and excessive wear. Getting the estimated service life was impossible. According to the calculations of the designers, the semi-trailers were supposed to serve 12 years. However, in practice, they had to be written off in 5-7 years.

The ATZ-90-8685c tanker was created in the interests of long-range aviation and, in general, was of no particular interest to other structures. In addition, the performance characteristics of the equipment were lower than expected. Finally, the collapse of the Soviet Union left all participants in production in various independent states. The lack of orders and production difficulties led to the fact that in 1992, Azovobschemash stopped assembling new articulated fuel tankers.

The produced cars were distributed between several aviation bases, where they were used for a certain time. The presence of design flaws that reduced the resource of technology, did not allow them to remain in service for a long time. Not later than the beginning of the 2000th, the few ATZ-90-8685c were decommissioned. Most of these machines, no longer needed by the armed forces, were sent for recycling. 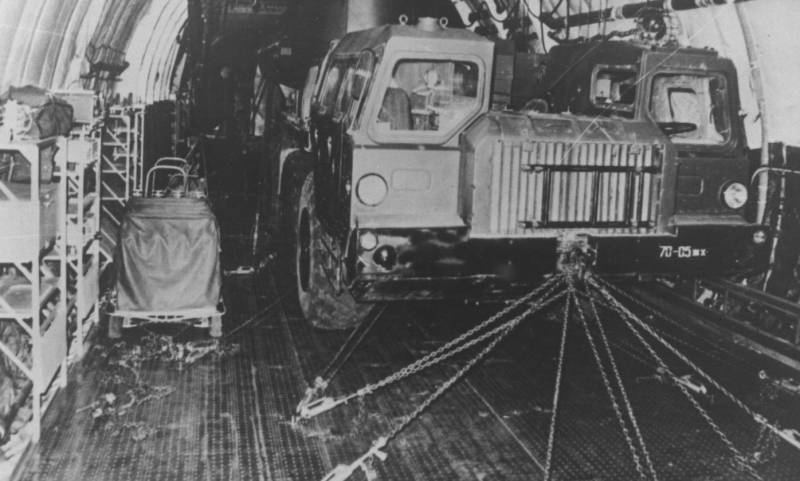 Fuel tanker in the cargo cabin of the aircraft. Photo Russianarms.ru

One of the remaining auto-servicing trucks of an unusual type was delivered to Kubinka not so long ago and became the next exhibit of the Patriot Park exhibition. ATZ-90-8685c stands on the open area and is available to all comers. Along with this machine, some other samples of aerodrome technology are present at the exhibition. Thanks to this unique tanker can be compared with other members of this class.

The main goal of the ATZ-90-8685c project was to create an automobile aerodrome tanker capable of carrying the maximum possible amount of fuel, which would simplify the maintenance of long-range aircraft. The tasks were solved only partially. The machine with the required characteristics reached mass production and operation, but its real capabilities were not fully arranged by the military. Having certain problems and having appeared in not the most successful time, the new tanker was quickly removed from production and soon decommissioned. The unique pattern of aerodrome technology was not able to fully realize its potential.