November 30 2017
79
Several major media outlets broadcast “Conversation with Dmitry Medvedev.” This event, which has managed over the past few years to become traditional. The chairman of the Russian government gives interviews to TV presenters: Valery Fadeev (Channel One), Sergey Brilev (TK Russia), Irade Zeynalova (NTV), Igor Poletayev (RBC) and Mikhail Fishman (TK Rain). The first question was asked by the premier Sergey Brilev. According to the TV host TK "Russia", the government of Dmitry Medvedev became the record for the length of his stay in power in Russia for all the latest history.

Dmitry Medvedev's extensive response is given by the press service of the head of government:

In my opinion, today we can testify that the economy has entered a stage of growth and in general, the changes that have occurred in the economy are quite favorable.

By the way, yesterday, in my opinion, Vladimir Vladimirovich Putin just said that the main achievement, or, so to speak, the main assessment of the outgoing year is that the economy is out of recession. This is exactly the case, because, I remind you, last year we had a fall in economic development, that is, the so-called negative growth, in the amount of (taking into account recalculations) 0,2%. A little bit, but nevertheless the growth was almost zero and even negative. This year the situation is different. Now, of course, there are a lot of forecasts, nevertheless, all analysts - both ours and foreign ones - agree that by the end of the current year we will get about 2% of gross domestic product growth. This is not a huge figure, but it is still a figure that corresponds to the average global growth rate in developed countries.

Further. Perhaps more importantly, this year we will have record-breaking low inflation. In all likelihood, it will be below 3%. I don’t name absolute numbers yet. It is also necessary that the statistics work and the year is over. But it will be an absolute achievement for the entire post-Soviet era. That is, for the entire period of development of modern Russia, inflation has never dropped so low. This, of course, has a direct meaning for the economy, where such inflation allows for the issuance of cheaper loans, and for ordinary citizens, for whom the depreciation of money and the solvency of the currency become more comprehensible.

Further. What is important, this year we can state that there is an increase in real incomes of the population, an increase in real wages. By the end of the year, it is likely to increase by approximately 3%. If we talk about nominal growth, it is 7%. This, perhaps, is also not the most outstanding result, nevertheless it is an important trend change. This means that we have entered a situation where incomes are no longer falling, but growing. And this is very important, extremely important for all citizens of our country.

There are other very serious macro indicators that I want to draw attention to. For example, investments in fixed assets, which also characterize the overall situation in the economy. By the end of the year, they will grow by more than 4%. This, too, we have not seen in recent years, and this is also the result of economic development this year. I’m not talking about such important indicators as a whole, like budget balance, foreign exchange reserves, which are also growing this year. Finally, it is extremely important that at the end of the year we can state that the ruble exchange rate is stable and predictable. But we'll probably talk more about this today, because this topic is always quite important.
In addition, at this time, Dmitry Medvedev was asked questions about the exchange rate of the ruble, about relations with the United States, about the problems of cybersecurity, about Russia's ability to join the circle of technological leaders of the modern world. 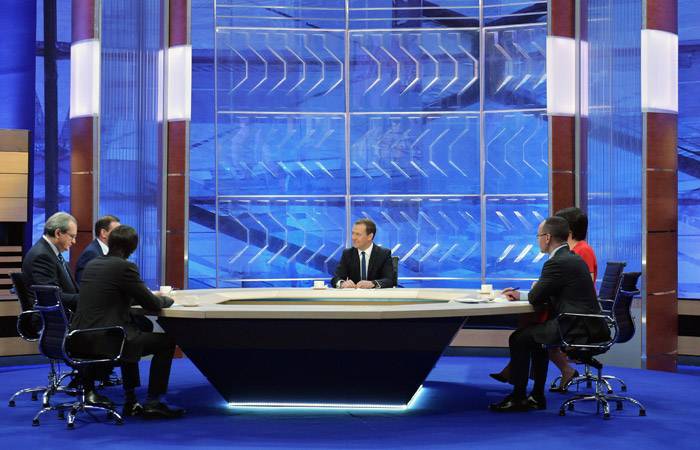 According to the head of government, Russia’s chances of being in the circle of technological leaders are there, however, the legacy of the 90s makes its own adjustments, when the country first had to think not about the development of technology, but about survival. Medvedev:
We have chances to be among technological leaders at least for the reason that in the 20th century our country was already among those.

Medvedev was asked why, under the de jure federal structure, our country is governed as a unitary state. In particular, we are talking about the need to write off debts to many regions. Medvedev said that the case in heterogeneity (including economic) of the country. According to the prime minister, the federal center is in any case responsible for the state of affairs in the subjects and it is unlikely that such an approach should be considered a unitary version of state administration.

About other question and answers - to Online government of the Russian Federation.

Photos used:
Press Service of the Government of the Russian Federation