November 30 2017
26
On the diesel-electric icebreaker of the new generation project 21180 "Ilya Muromets", which was built for the Russian Navy, the flag raising ceremony took place in St. Petersburg on Thursday.

The main command is pleased to note that once again, in strict accordance with the contract, we receive the ship. More than 30 years the fleet has not received ships of this class.
- said at the ceremony of raising the flag on the icebreaker "Ilya Muromets" Deputy Commander of the Russian Navy for armament Viktor Bursuk. 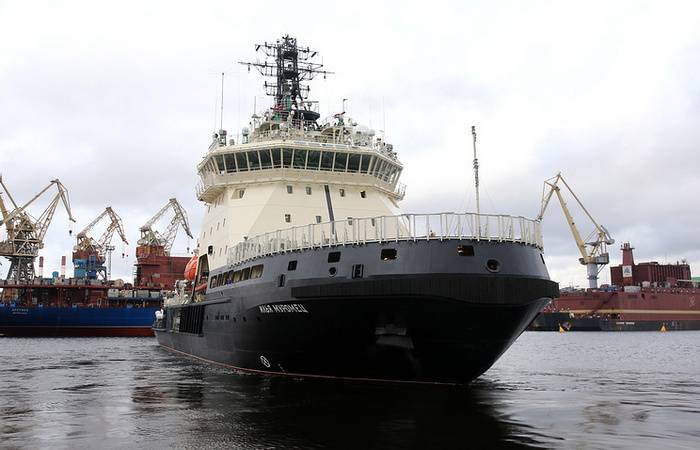 New multi-purpose vessel designed for icebreaking support and deployment fleet in ice conditions, self-guiding of ships and vessels, as well as their towing in ice conditions. The icebreaker of project 21180 is a new generation vessel with new principles of electric propulsion and a modern power plant.
In addition to its main function, the icebreaker can transport cargo in the hold and in containers on the upper deck, perform hydrographic surveys, and also participate in rescue operations.

The vessel can be used to extinguish fires at emergency facilities, eliminate emergency oil spills, as well as for the transport of troops. For loading and unloading operations, the icebreaker is equipped with a crane with a lifting capacity of 26 tons. In the bow of the vessel is a helipad, reports RIA News

Ctrl Enter
Noticed oshЫbku Highlight text and press. Ctrl + Enter
We are
Laid the keel of the first Soviet-era icebreaker with a capacity of 25 megawatts
26 comments
Information
Dear reader, to leave comments on the publication, you must to register.