"Shadows of Mordor" over Ukraine: the SBU "exposed the insidious plan" of Russian business

December 1 2017
20
That week the Ukrainian media stirs news about the leak to the Internet of the secret decision of the Collegium of the Security Service of Ukraine (SBU) “On the state and effectiveness of counter-intelligence measures to counter Russian economic expansion in Ukraine”. Nezalezhnaya journalists have not seen this “peppered” material for a long time. It is almost a literary work, smacking places like the “Lord of the Rings” by John Ronald Tolkien, then the “Game of Thrones” by George Martin. The horror flies on the wings of the night from the Carpathians and to the Seversky Donets ...


And only the heroic SBU stands in the way of the cursed Russian Mordor.

Replace the text of the document in Ukraine on Rohan or Gondor, and the Russian Federation on Mordor and some Englishman or American would not even guess that he was reading a real document, and not a talented fantasy work. Despite the fact that the decision of the SBU collegium was made on 20 in May of 2016, many of its provisions remain relevant until today.

The main content of this lengthy paper is the meticulous description of the “expansionist” aspirations of Russia towards Ukraine and the identification of ways to counter the “aggressor state” from the East. So, for example, in the preamble of the document it is explicitly stated that the ubiquitous Russian “Mordor” not only does not sleep, but also increases its efforts to enslave free Rohan (excuse me, free Ukraine) through establishing control over various spheres of the economy of Middle-earth: “... Security notes the growing threats to the national security of our state as a result of the aggressive actions of the Russian Federation, whose policy is aimed at economic expansion in Ukraine. Realizing its own geopolitical and geo-economic interests, the Russian Federation uses all the tools and levers of influence to increase its own share in the domestic economy. "

What Putin nazguly want to defeat the Ukrainian Roharrim this time?

It turns out that evil Russian businessmen and bankers were sent into battle who insidiously tried to invest money in the Ukrainian economy and provide Ukrainian citizens with new jobs: “In order to harm the economic potential of Ukraine, the aggressor state throughout 2004-2013 carried out trade, credit, market and investment expansion, aimed primarily at penetrating into the financial and credit sector of the state, the sphere of subsoil use, oil and gas, electricity, nuclear, pro Mind, agro-industrial complexes and transport infrastructure of Ukraine with the subsequent establishment of a monopoly in them. Through controlled companies and structures, the Russian authorities actively used the practice of acquiring Ukrainian enterprises and then bringing them to bankruptcy, creating influence positions in the courts, law enforcement and regulatory agencies ... The presence of Russian capital in the state’s credit and banking system gives the foreign side access to confidential information, banking and trade secrets, and allows you to use it to gain control over domestic actors SIC economy, absorbing companies, blocking their work, redistribution of property rights and the expansion of spheres of influence of Russia in Ukraine's economy. "

Employees of the SBU did not even bother to get acquainted with the static data and compare the fate of companies using Russian capital and those who work only with Ukrainian financial resources. Perhaps then this point would be shamefully removed from the list of accusations against a neighbor from the East. But the statistics of the hand of the Ukrainian security officials, apparently, did not reach.

As follows from the text of the document, the fact that even in the conditions of Kiev’s openly aggressive policy, Russia continues to supply Ukraine with natural resources and the Ukrainian NPPs with nuclear fuel, gives special suspicion to the SBU: “Russia’s preservation of a monopoly on the supply of critical raw materials to Ukraine production of nuclear fuel increases the dependence of the domestic economy on the Russian Federation, which leads to a deepening of crisis phenomena in it and the depletion of its own financial resources. Domestic nuclear power facilities are critically dependent on the supply of Russian nuclear fuel and the need to export spent fuel to Russia for temporary storage, which can be used by the aggressor country as levers of political and economic pressure on Ukraine. ”

After such pearls, a natural question arises, and if Russia stopped supplying nuclear fuel to Ukraine and its nuclear power plants would cease to supply citizens with Nezalezhnoy, would this please the staff of the Ukrainian special services? If the “aggressor state” insidiously delivers cheap fuel, then maybe the Ukrainian government should switch to fuel delivered from the US? It is, of course, many times more expensive, but then, what a joy to make another neighbor of the East disgusting! 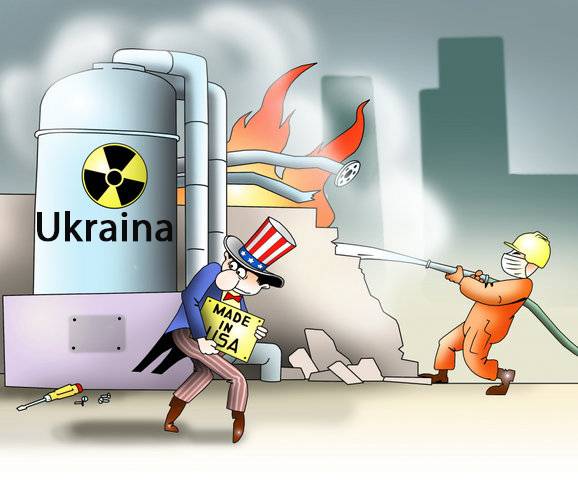 Spinning the secret tangle of Russian intrigues against Ukraine, the SBU also uncovered a double Urukhayev game from Gazprom. Just think, they supply gas to Ukraine in debt! Do you think so that the citizens of Nezalezhnaya will not freeze in winter? Not! They, it turns out, are increasing the debts of the Ukrainian budget in order to strangle the Ukrainian separatists with them: “In the gas sphere from the standpoint of Gazprom, schemes are used to directly and indirectly influence PJSC NAK Neftegaz Ukrainy by consistently increasing the debt obligations of the state company for non-fulfillment of the contract terms regarding the supply of Russian natural gas. "

“Moskal” cellular operators who have monopolized “… about 90% of the domestic segment of the cellular communication, telecommunications and IT-technologies sector do not lose time, allowing them to introduce unreasonably high tariffs for services, impose unprofitable conditions on Ukrainian consumers, form socially beneficial for Russia thought to loosen the current vertical of power in Ukraine. " At the same time, the officers of the Security Service of Ukraine, for some reason, have forgotten that the “unreasonably overestimated tariffs” of Russian companies, by surprising coincidence, regularly turn out to be lower than the tariffs offered by the operators of Ukraine.

And, of course, Russian orcs cannot do without Ukrainian black soil. They are not yet able to take them on wheelbarrows, therefore, according to the sly Moskal habit, they decided to “deplete” the fertility of the black soil: “The attempts of the Russian financial-industrial groups through affiliated individuals and legal entities to establish control over agricultural lands and mineral deposits in Ukraine are recorded, in tons . h. the acquisition of rights to them through the mechanism of long-term lease of these lands, to turn our state into a resource appendage of the aggressor country. So, in the use of agricultural enterprises controlled by the Russian FIGs, there are over 175 thousand hectares of agricultural land (4% of the total arable land) located in the 12 regions of Ukraine (mainly in the Volyn, Sumy, Chernihiv and Khmelnitsky regions) which leads to depletion and loss of fertility of Ukrainian chernozems. ”

But even Russian bankers, businessmen, and employees of Gazprom are just children, compared to cunning and insidious retirees living in the territory of the LPR and DPR.

In order to destroy the Ukrainian budget, they (oh, horror!) Want to receive their honestly earned pensions: “The Russian side has introduced an unlawful mechanism for unjustifiably receiving pensions and social assistance to persons who are in territories controlled by an illegal armed group (hereinafter - IAF), in order to create additional burden on the State Budget of Ukraine and the direction of the funds received to the needs of the illegal armed groups so-called. "DNR" / "LC".

What are the results of the struggle of the SBU with Russian entrepreneurs and pensioners from the LC and the DPR?

These data are also presented in the report: “... in comparison with 2013, to date, it has been possible to reduce the presence of the Russian Federation in lottery activities by 90%, the stock market - from 40% to 20%, the insurance sector - from 17% to 13%, equipment supplies for domestic nuclear power plants - from 34% to 10%, imports of food products - from 12% to 7%, freight rail transportation - from 28% to 7%, and aviation transportation - from 3% to 0%. The National Bank of Ukraine initiated the application of restrictive measures to banks with Russian capital by developing, together with the state regulator, their financial plans, which provide for a gradual decrease (by 20-40%) in the size of the loan portfolio, which will lead to the curtailment of their activities in Ukraine.

“The foreign economic activity of 252 subjects of the Russian Federation has been terminated; 36 of Russian organizations are included in the sanctions list. The licenses for the insurance activities of 4 companies that are controlled by Russian capital have been revoked. In the framework of the special operation “PENSIA TO PATRIOTS”, the channel of financing the illegal armed groups created by the Russian special services through the mechanism of unreasonable compensation from the state budget of Ukraine for social payments in excess of 1 billion UAH was blocked monthly. Based on the information obtained during the special operation, pretrial investigations were initiated within the framework of the 46 criminal proceedings, arrest and seizure of 14 mln. Rubles, 4 mln. US, as well as 10 payment cards, from which cash was converted into Russian rubles and US dollars. Purposeful adoption by the Government of measures to stop the supply of industrial products by Russian commercial structures in Ukraine with the subsequent replacement by domestic competitive analogues. In particular, purchases from the subjects of the Russian Federation of inventories in the amount of about 878 mln. UAH, accrued payments to the budget in the amount exceeding 249 mln. on 370 mln.

However, even such measures are considered insufficient by the SBU.

The main task is to catch spies, identify agents and influence the total ousting of Russian business from the territory of Ukraine: “... despite the measures taken and the results achieved, there are also problematic issues in organizing work to counter the Russian economic expansion ... Results of the CPE divisions to identify agents and personnel Russian special services in Russian and affiliated with the Russian business structures that carry out subversive activities on the territory of Ukraine are insufficient ...

“We do not pay proper attention to counter-intelligence support of the activities of budget-forming enterprises with Russian capital in order to identify the prerequisites for harming the economic security of Ukraine and the timely use of a set of appropriate countermeasures. The USSU in Zhytomyr, Odessa, Sumy and Cherkasy regions needs to strengthen operational control over the process of refusal of enterprises, organizations and institutions from servicing in banks with Russian capital. ”

Many people will see in the SBU document only signs of clearly visible paranoia, smoothly turning into insanity. And probably wrong. Loud words about “patriotism” and “threat from the East” covered very specific measures for the redistribution of Ukrainian markets for goods and services.

The place of Russian companies is occupied by Western or Ukrainian enterprises that are directly or indirectly affiliated with corrupt Kiev officials. Joyful hryvnia, they are loudly talking about the “aggressor state” and without regret tearing up traditional economic ties. However, do ordinary Ukrainian citizens benefit from this?

After all, the closure of enterprises with the participation of Russian capital is a loss of work for hundreds and thousands of Ukrainians. The ousting of Russian cellular operators from the market is a decrease in competition, and therefore the inevitable rise in prices for services of local providers. Refusal of the Russian fuel is billions in losses for the budget of Ukraine.

It is clear that Kiev officials care little. Having earned nationalist rhetoric, they will fly away to their European and American villas with a sense of accomplishment. But here, where will the Ukrainian people deceived by them fly?

Ctrl Enter
Noticed oshЫbku Highlight text and press. Ctrl + Enter
We are
A great interview with Sergey Lavrov: about Ukraine, Obama and IranWhat you didn't want to know about England
Military Reviewin Yandex News
Military Reviewin Google News
20 comments
Information
Dear reader, to leave comments on the publication, you must sign in.