"Metal War": from the island of Cyprus to Egypt

December 5 2017
88
Very often we come across questions like: "How do scientists know this?" or even worse - "They made it up!" Meanwhile, there are a number of historical disciplines that provide historians with the information they need. They are called “auxiliary historical disciplines”. There are many of them, but today we will talk about the text, so we will name only three. This is epigraphy that studies those inscriptions made on hard materials, such as stone, metal, etc. (usually these are inscriptions containing information contemporary to that time). Paleography is a historical and philological specialty that studies the found monuments of ancient writing as a whole, that is, their form and content. And even diplomacy, a special science dealing with the study of documents, letters and treaties of military-political, diplomatic and commercial content. Today we will tell you about one such document, which is closely related to the history of the Bronze Age and the island of Cyprus.


In his remarkable dilogy “The Journey of Baurdjed” and “On the Edge of Oikumen”, Ivan Efremov expressed for that time the bold idea that in ancient times the seas did not divide, but united different peoples. And in fact. No other way, except by sea, could not get the ancient inhabitants of the island of Cyprus on your piece of land. By sea, the ancestors of the late Minoans reached Crete, and the ancient Cycladic people likewise reached their islands. But does this mean that they then forgot their homeland and didn’t go there anymore? Or did not swim somewhere else in search of a better lot or valuable raw materials? Of course not. And the ships sailed, and trade caravans went, and communications between the ancient peoples existed. For example, we have reached the hieroglyphic records, indicating that the official relations of Ancient Egypt with foreign countries took place even during the reign of Pharaoh Amenhotep III, when Egypt was experiencing an economic rise. Today 382 is known for such labels. A part of this diplomatic correspondence of Amenhotep, which was conducted in the Akkadian language, was in the archives of the city of Al-Amarn and it was their decoding that provided interesting information about this period of Egyptian history. However, today we are talking not so much about Egypt, as about deciphering the "letter 35", that is, the history of ancient diplomatic and trade Cypriot-Egyptian relations.

These are such comic plates that can tell a lot (and tell!) To specialists. Egypt, Sakkara, relief from the tomb of Ptahemhat, the New Kingdom, XVIII dynasty, around 1320 (Egyptian Museum, Berlin) 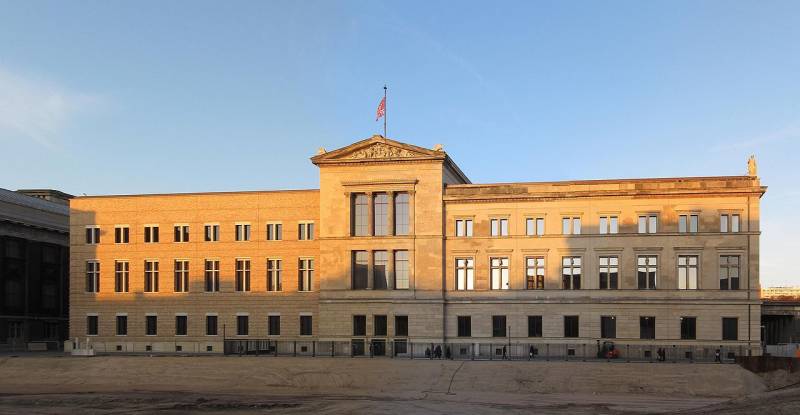 In the past, the material on the Bronze Age on the island of Cyprus was told that soon after the Minoan disaster of the XV century. BC er there appeared the state of Alacia, whose ruler in the XIV century BC. er Magnificently called himself the brother of the Egyptian Pharaoh. And just the diplomatic correspondence from El Amarna helps to shed light on the events of those distant years of the late Bronze Age. After all, what is written in them, to a large extent, allows archaeologists to draw conclusions about the realities of that era and compare them with archaeological finds. That is, we have written confirmation of the many finds that tell us that there were strong trade links between the island of Cyprus and Egypt. There is a document EA35, which is an example of correspondence between the ruler of Alacia and the pharaoh of Egypt, which contains detailed information about the political and economic structure of life on this island in the late Bronze Age, and moreover, it gives us very valuable information about Alacians and Egyptians traded among themselves, and a diplomatic statue of relations between the two states. 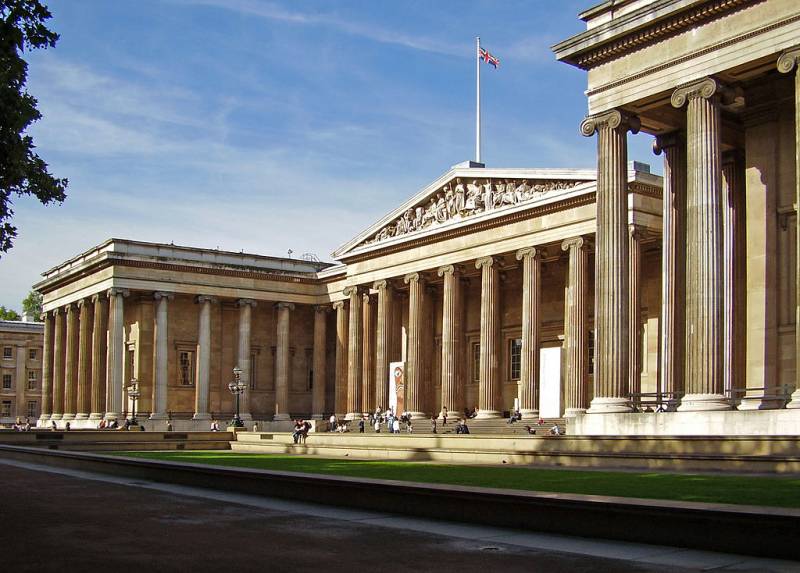 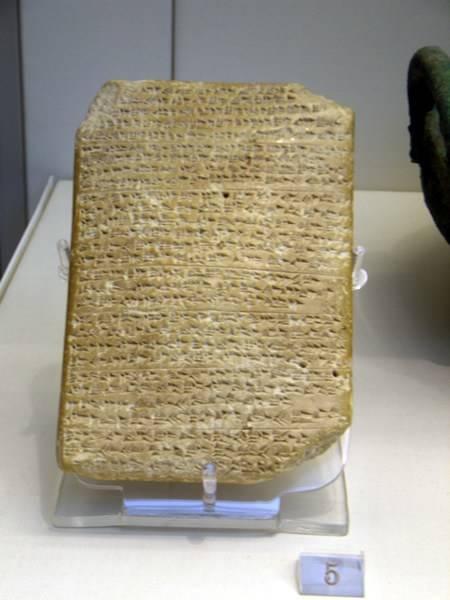 And this is the very "Letter 35". (British Museum, London) 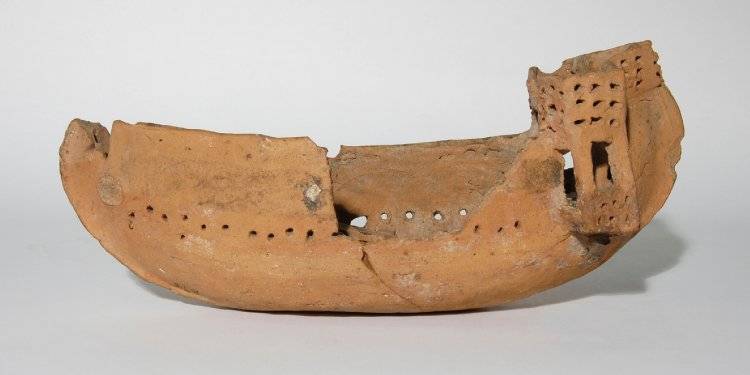 What is this document about? The “35 Letter” or EA 35 is a clay plate, by the way, made from Cypriot clay, found in El Amarna in 1887, 5,75 x 3,875 inch, and covered with Akkadian cuneiform around 1375 BC. Bought it for the British Museum Sir Ernest W. Wallis Budge in 1888. At the beginning of the letter in the 10 line, the ruler of Alacia apologizes for the small amount (only 500 of talents) of copper that he sent to Egypt. However, today it is the largest batch recorded on any of the records from the Amarna archive. He blames the compiler of the letter with the death of many workers caused by Nergal (the god of death and the underworld), before whom, of course, ordinary people were powerless. Further, having apologized in the letter for violation of the supply volumes, the king of Alasia asks to send him silver, bull, oil and magician eagle (!) And, finally, politely demands unpaid money for the previously delivered wood from his lands. At the end of his letter, he advises Pharaoh not to deal with the kings of Hattie and Shanher, which implies that he did not swear allegiance to the Hittite king and tried to pursue an independent policy. 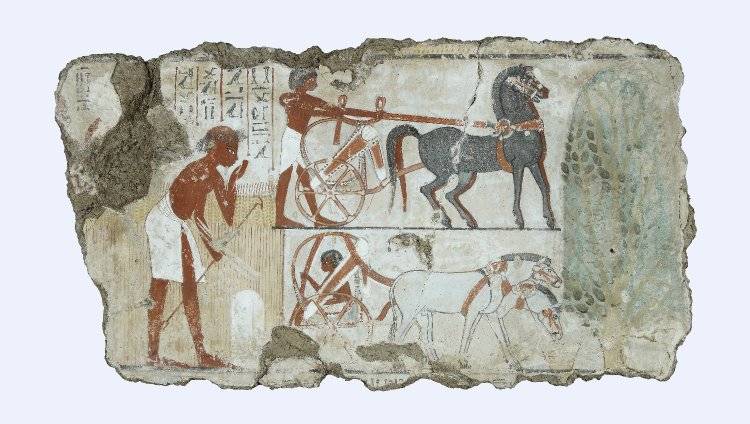 Ancient Egyptian frescoes are not just works of art of a particular era. They tell a lot. For example, this is a painting from the tomb of a nobleman of the XVIII Nebamun dynasty, buried in 1350 BC. Interestingly, in the upper part of the picture, a horse is harnessed to the chariot, but below it is onagra. Ahhhhhhhhhhhhhhhhhhhhhhhhh! Indeed, if you see the inscription “elephant” on a cage with a tiger, do not trust your eyes. (British museum) 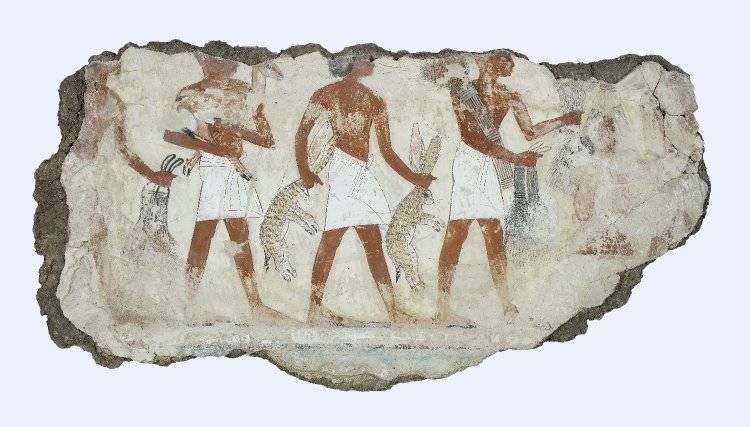 Another painting from the tomb of Nebamun. Hunters are caught animals.

But can ancient Alassia be on the island of Cyprus? Could this state formation be located in Anatolia, Syria or Sicily? However, a comparison of the eight letters of Al-Amarna and the documents of the Hittite and Ugarit, as well as the petrographic analysis of EA 34 and 35, it was convincingly proved that ancient Alasia can really be identified with Cyprus. The records of El Amarna (EA 33-39) indicate that Alasia was a state, such as Assyria, Mitanni and Babylon, and not one single city. The mention of the lost labor force in Alacia from the “hand of Nergal” indicates, above all, the identification of Alacia with a specific area of ​​mining, and not with the whole island of Cyprus. That is, it is possible that people there died from some unknown disease, possibly the plague. In addition, Alacia was an independent state, and the Egyptian pharaoh was considered as the “brother” of the king of Alasia, which implies equality (at least, declared!) Of both rulers. Their correspondence (EA 33-39) also shows that Alacia was an island using ships to travel to and from Egypt, and that she maintained economic and political relations not only with Egypt and with the states in Syria, and that there was exported a large amount of copper. 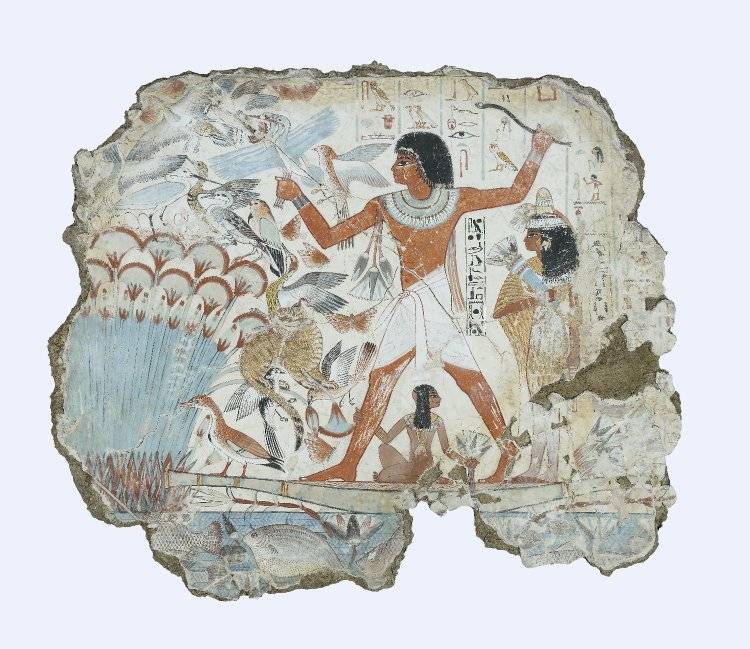 "Nebamun's Hunt" is one of the most remarkable frescoes from this tomb. The image is made in the best traditions of Amarna art and is notable for its vividness and richness of colors. 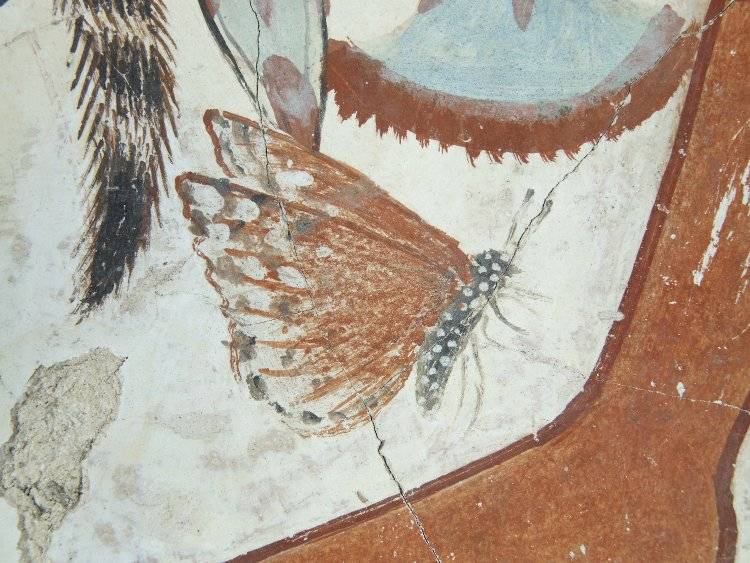 For example, a butterfly. 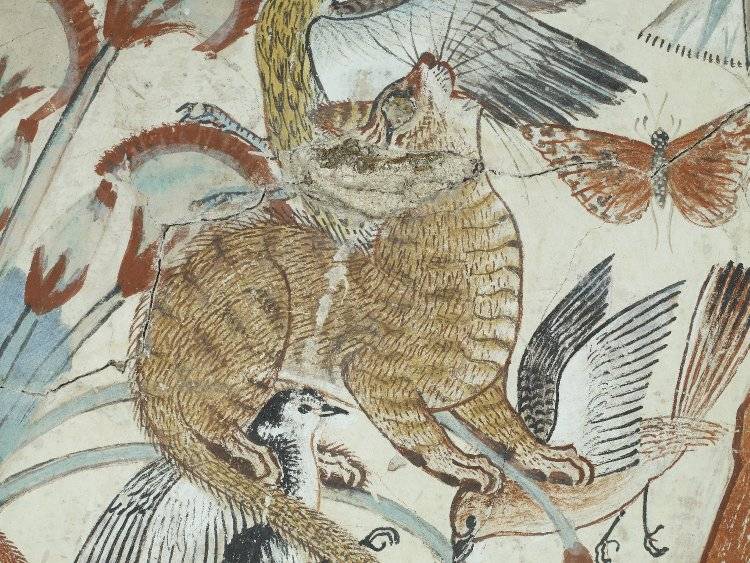 Cats in Egypt took part in the hunting of waterfowl owners and were trained to bring prey to them. 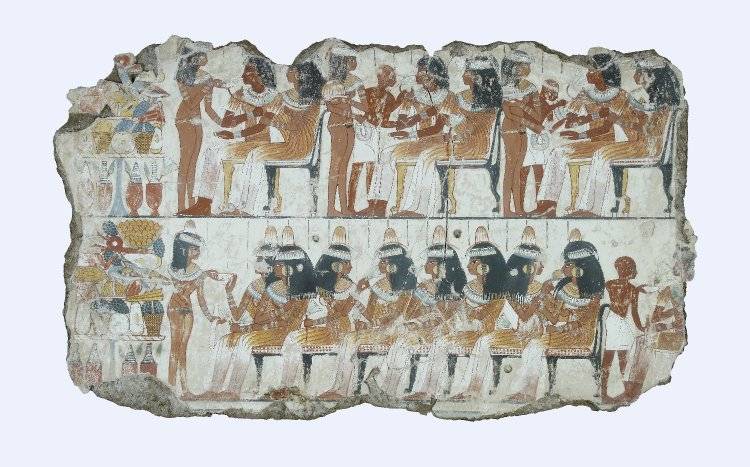 Scene of the feast. Here and fashion, and products - everything is depicted very clearly.

The reference to the "low" weight in 500 talents (7500 kg) of copper may indicate certain standards in supply, and the continuous repetition of these supplies, indicating that there is an established trade between Egypt and Cyprus. In addition, the archaeologist can make an important conclusion about the average tonnage of cargo, and the capabilities of the courts of the Late Bronze Age. The demand to pay for the wood supplied also shows that the relations of the two countries were based precisely on trade, and that Cyprus was not a tributary of Egypt, but exported copper, wood and ships there, receiving silver and various luxury items for it. 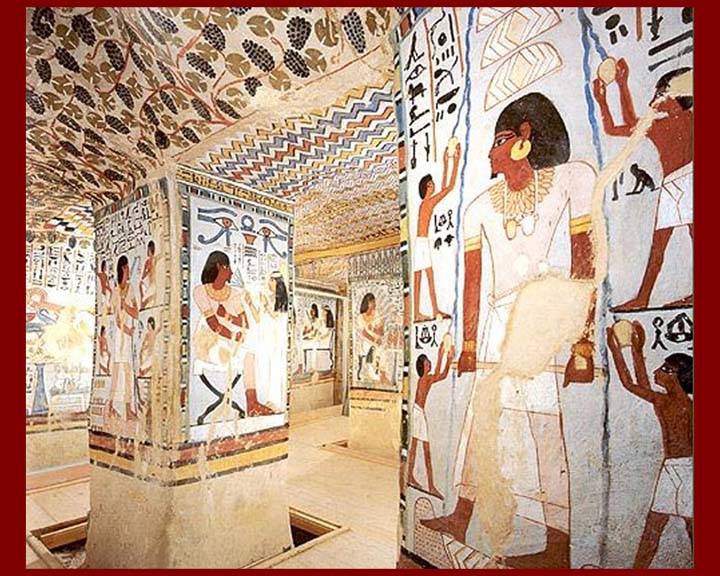 Tomb of Sennefer. Some tombs were painted with frescoes from the floor to the ceiling.

The predominant location of Cyprus on the most visited maritime routes in the eastern Mediterranean, as well as its raw materials, made it an important point of the late Bronzese maritime trade. The demand for Cypriot copper was constantly increasing, especially in the XIV century, and provoked the strengthening of centralized power on the island. An archaeological report reveals the presence of several centers of copper mining and metallurgy associated with coastal harbors. Thanks to this, Cyprus maintained relations of socio-economic and cultural exchange with its neighbors from the Aegean Sea to Babylonia and from Anatolia to Egypt.

Stele with a picturesque image of a Syrian merchant drinking wine. New Kingdom, XVIII Dynasty, 1351 – 1334 BC.

Letters of El-Amarna give a reliable picture of this economic and, apparently, friendly relationship with the Egyptian power. Egypt needed Cypriot copper, as well as Cypriot wood, well, and the rulers of Cyprus sought Egyptian silver and luxury items. The information obtained from EA 35 adds a lot of interesting information to Cyprus, and hopefully it will help to draw the attention of specialists to the study of Cyprus shipbuilding and the role of the island not only as a supplier of metal, but also of wood. With such a colossal deforestation, which should have taken place on the island for the sake of charcoal and the construction of ships, it is not surprising that the island eventually became treeless and arid. 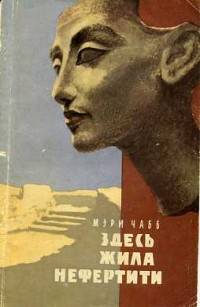 There is a very interesting story by the Englishwoman Mary Chubb “Nefertiti lived here”, which also tells about the work of archaeologists, the Amarnian period in the art of Ancient Egypt, and the discovery of the famous “Nefertitti head”. 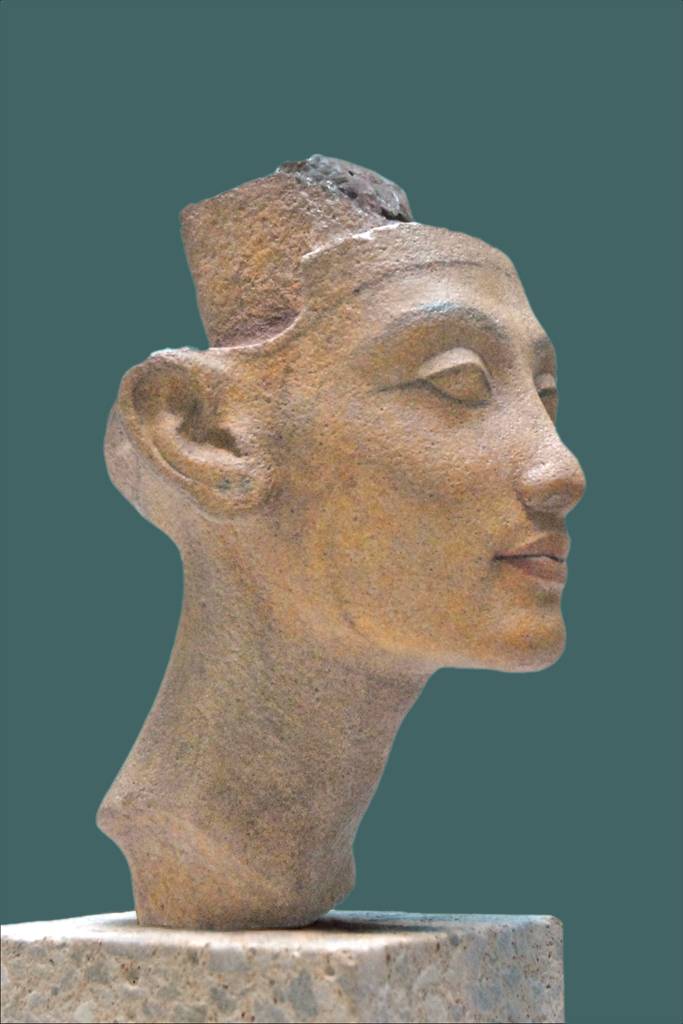 And this is she, Nefertiti or her daughter Meritaton in the Egyptian Museum of Archeology in Berlin. 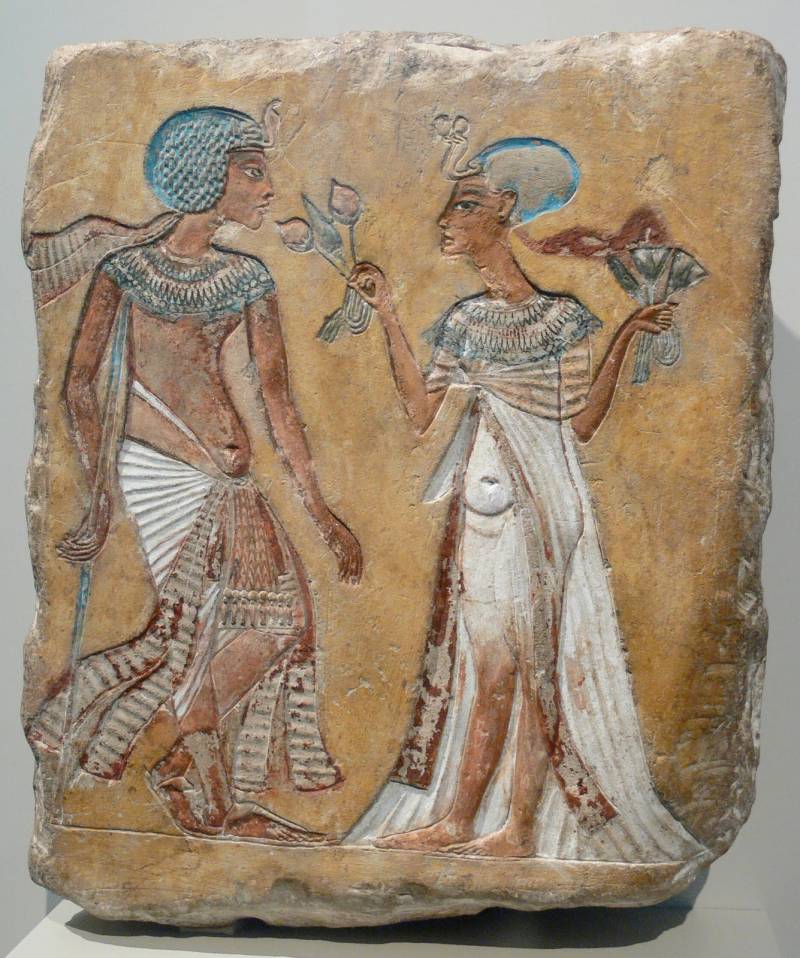 Relief from Amarna, presumably depicting Akhenaton and Nefertiti, ca. 1335 BC

But as they say, then - more. In 1991, in Ezbeth Helmi in Egypt (ancient Avaris), a very important archaeological discovery was made: fragments of Minoan wall paintings, which depicted games with a bull, were found on the site of the palace garden. In the typical Minoan style, it depicted boys on the back of a bull. In addition to Santorini, Crete and Avaris, wall paintings made in the Minoan manner are preserved only in two places: Tel-Kabri in Israel and Allah in Syria. It is possible that the embassy of the ancient Cretans could be located here in Avaris, and the building was painted in the appropriate style for its staff. 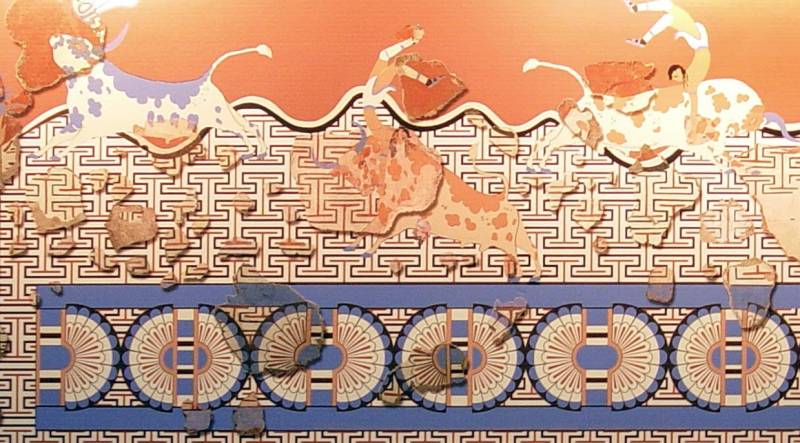 Reconstruction of the Minoan frescoes from Avaris (modern Tel al-Dab).

P.S. The most interesting urban settlements of ancient Cyprus are described in the following dissertation: Armstrong, KM (2003) Settlement of Cyprus, Masters thesis, University of Cincinnati. It easily opens through Google and you can browse and read it page by page.

Ctrl Enter
Noticed oshЫbku Highlight text and press. Ctrl + Enter
We are
Chernobyl notebook. Part of 3The hunt for the Blackbird
88 comments
Information
Dear reader, to leave comments on the publication, you must to register.