Teresa May made it clear: Eastern Partnership acts against Moscow

November 30 2017
45
From the words of British Prime Minister Theresa May it becomes clear: the Eastern Partnership is directed against Russia. “Eurocracy” in Brussels carefully conceals this fact, but Teresa let it slip: Russia is “a threat to international security.” 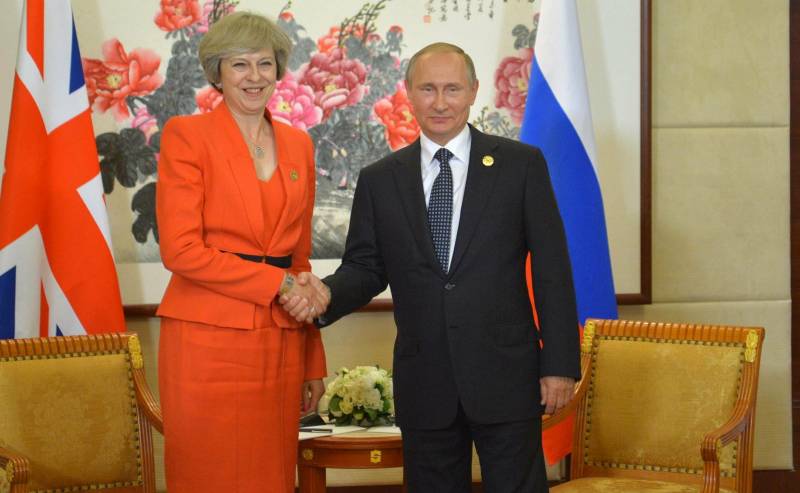 Vladimir Putin and Theresa May at a meeting at the G20 Summit in Hangzhou (China). September 2016 of the year

Marco Mayer in edition Contra Magazin quotes the British premiere Theresa May. She made it clear that the Eastern Partnership was launched to harm Russia. Of course, this goal of Brussels is "always denied."

Recently, the leaders of the EU and the six former Soviet republics (Ukraine, Georgia, Moldova, Armenia, Azerbaijan and Belarus) met to discuss the prospects for closer cooperation. Until now, Brussels has always been told that the Eastern Partnership (EaP) is “not directed against any country."

But now the Prime Minister of Great Britain Theresa May let it slip. After her speeches, it became clear that the bumps from the EU say something quite different from what it really is.

Teresa May, not hesitating, warned: the EU should be wary of "actions of hostile states, such as Russia," who "tried to destroy our collective power." She stressed: “From agriculture in Ukraine to the technology sector in Belarus — there is a lot of potential everywhere in the eastern region that we should develop and develop.”

The German Chancellor Angela Merkel also spoke. She delicately reported that the EU’s partnership with the six states “is very important for our own security.” She did not dare to name Russia directly, but after these words it became clear where the wind was blowing from. The observer believes that she meant the same as May.

As for May, she had previously announced her intention to spend 100 million pounds on the “Russian disinformation” confrontation in the Eastern Partnership. In her opinion, Russia is “a threat to international security”, provoking “dangerous and unpredictable conflicts”, “interfering in elections”, “hacking” the Danish Ministry of Defense and the German Bundestag, and “undermining” liberal Western societies in general.

It is also interesting, further Meyer writes, that none of the Russian political leaders ever said that the EU or Great Britain are “enemy unions” or “enemy states”. On the contrary, Moscow has repeatedly tried to build bridges and ignore the hostilities of European (and American) politics.

Any socio-economic project, we note, in which the West and the post-Soviet space are simultaneously involved in any way, will be used by the West to limit Russia's influence. This is a long-proven geopolitical theorem, and the statements of Theresa May and Angela Merkel are another confirmation of this.