Spectacular way out of the Hague prison: drama in an international courtroom

November 30 2017
17
Until now, Serbian prisoners have been the victims of the so-called Hague Tribunal. Some of them did not live to see the court, either “ending their lives by suicide” (in a carefully guarded prison, stuffed with video surveillance cameras!), Or by dying from a “mistakenly appointed” medicine. There were also sudden deaths, overtaking former prisoners soon after the sentence and even after leaving the dungeons.


Now a Croat named Slobodan Pralyak has become a victim of this “justice”. Nothing to say, he left spectacularly, even, one might say, beautiful. He drank poison during the trial, after his appeal was rejected. "Slobodan Pralyak is not a war criminal, rejecting your verdict“- he said before he drank some liquid from the bottle. He was taken to the hospital, where he died. Of course, this does not mean that it can automatically be attributed to the heroes - the Nazi war criminals were also poisoned. However, the bright gesture was a success. 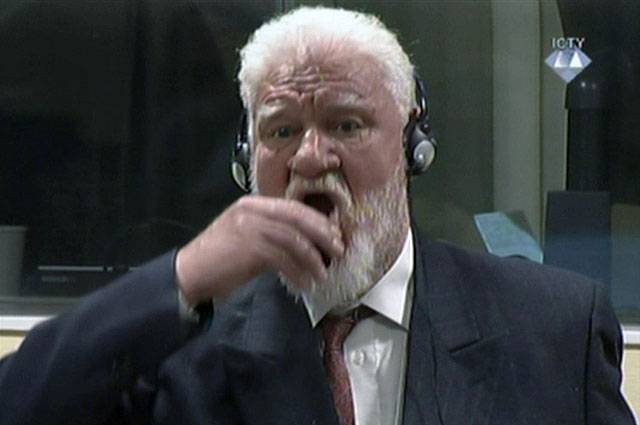 Together with Pralyak, there were five other Croats in the dock. All of them were convicted in 2013 year. In particular, Pralyak received 20 years imprisonment. He was accused of crimes against humanity committed in the territory of Bosnia and Herzegovina (BiH).

After the collapse of Yugoslavia, when the West recognized the independence of BiH, disregarding the interests of the peoples living there, not only the Serbs (who proclaimed Republika Srpska) opposed this. Croats also tried to create their own education - the so-called Croatian Herzog-Bosna. At the same time, the leader of the Bosnian Muslims, Ilia Izetbegovic, saw Bosnia and Herzegovina as a purely Muslim state. But the West, which contributed to the collapse of Yugoslavia, prefers not to recall this and does not accuse Muslims of ethnic cleansing. On the contrary, he considers them the main victims.

Pralyak was not originally a military man. Rather, on the contrary - intellectual to the bone. He graduated from the Faculty of Philosophy of the University of Zagreb, as well as the Academy of Theater, Film and Television. He taught philosophy, sociology. I also tried myself as a director and made some films. But in 1991, he was among those who decided to fight for the self-proclaimed Duke-Bosna. He served as a general, became the head of the headquarters of the Croatian Defense Council.

The Hague Tribunal accused him and others who were with him in the dock, in ethnic cleansing, in torture, rape on the territory of Duke-Bosna. They mainly concerned Bosnian Muslims, but also other non-Croat peoples. One of the charges stated that in November 1993, in the city of Mostar, the Croats destroyed the Old Bridge, which was on UNESCO's list. He was also accused of the fact that he knew about the planned attacks on mosques in East Mostar, as well as on employees of international organizations.

The condemnation of Praliac and his accomplices, at first glance, casts doubt on previous claims about the anti-Serbian roll of the Hague Tribunal. Say, Croats are also on trial for war crimes. And also - on the principle of command responsibility. But this is only at first glance.

If you look closely, you can see - most of the convicts are Serbs. Among those who died in the “democratic” European prison were also mostly Serbs. The deadlines for Serbian military and political leaders are huge and defy common sense. The political leader of the Bosnian Serbs, Radovan Karadzic, was imprisoned for 40 years. A few days ago, the Bosnian Serb army commander, General Ratko Mladic, was sentenced to life imprisonment. The tragic fate of Slobodan Milosevic ... Here and at all, as they say, No comments.

As for the Croats, firstly, there were no defendants of this rank among them. If the president of Serbia and Yugoslavia was accused of “war crimes”, then why did nobody stutter to press charges against the then President of Croatia Franjo Tudjman? No, he to the last enjoyed the support of the West and quietly died his death in freedom.

Secondly, among the defendants of The Hague, the Croats are much smaller than the Serbs. Thirdly - well, what are the 20 years, appointed by Pralyak, compared to the life sentence for Mladić and the 40-year term, which Karadzic has to serve?

And - finally - fourth. Real punishment was imposed on Croats accused of crimes against Bosnian Muslims. Meanwhile, there were Croatian war criminals who committed atrocities against the Serbs. This is General Ante Gotovina, as well as Ivan Chermak and Mladen Markach. When in December 2005, Gotovina was arrested right at the resort where he rested (in the Canaries) and taken to The Hague, it seemed that justice for people living in the Republic of Serbian Krajina would triumph at least in part.

It is worth recalling that after the collapse of the Socialist Federal Republic of Yugoslavia, not only in Bosnia and Herzegovina, but in Croatia too, not everyone agreed with this turn of events. A Republika Srpska Krajina was created, whose inhabitants did not want the collapse of the country. It was also wiped out by the leadership and army of Croatia with the full connivance of the West. At the same time war crimes were committed, in which The Hague, trying to portray objectivity, initially accused Gotovina and his accomplices.

First, in April 2011 of the year, these defendants were convicted. Gotovina received the 24 of the year in prison, Markach received the 18, and Chermak was acquitted. But soon, in November 2012, the Appeals Chamber of the Hague Tribunal dropped all charges against the executioners of the Serbian Krajina, and they were released.

As a result, the operation "Storm" Serbian Krajina was destroyed. This operation has now become an ideal for Ukrainian punitive - high-ranking and not very. They like to refer to it, threatening the same fate of the People's Republics - the DNI and the LC. A bad example is contagious, especially with the Hague’s acquittal.

Five years after the satisfaction of the appeal, the Croat Pralyak was less fortunate. The Appeals Chamber did not cancel his sentence. They were chasing him not for the murder of the Serbs, but for the murder of the Muslims! To the Bosnian Muslims and to the Kosovo Albanians, the Hague “justice” is generally humane to the point of absurdity. No wonder - it was the Muslims of the Balkans who very soon needed Washington as cannon fodder for completely new projects. The very projects with which Russian VKS in the Middle East are currently fighting.

One of the main questions to ask after this is the so-called international tribunal - Why was the defendant able to carry a bottle of poison into the courtroom? In a well-protected system, where the extra fly will not fly.

It is worth looking at the video - there is another question. Why did the guard not prevent Pralyak from drinking poison? I didn’t stop him when he screamed out his slogan, took out a bottle, brought it to his lips ... You can still recall photos in which guards stand behind any Serbian defendant ready to react at any moment.

Moreover, after Pralyak's demarche, even the meeting was not immediately interrupted. The judge continued to speak for about a minute, as if nothing had happened, and only after that a stir began in the hall.

There is an assumption - I repeat, this is just an assumption - that in The Hague they knew in advance about such an intention of the defendant. Why not prevented? It is necessary to somehow wash off the accusations that only Serbs are killed in the dungeons of the trial ...

If the assumption is wrong - then there is criminal negligence of the ICTY staffthat did not prevent drama in the courtroom. In any case, the Hague Tribunal can be congratulated - now in addition to his account - and the death of a Croatian prisoner, and the Croatian government also opposes this odious court. Another thing is whether it will dare to speak seriously against the owners of this body, from which it is not necessary to wait for justice or elementary protection ...