November 30 2017
15
At the end of October 2017, the Kalashnikov concern presented a promotional video dedicated to the next new product. This is a smooth-bore Kalashnikov TG2 carbine. This is the first firearm pattern. weapons Concern chambered for .366 TKM. A feature of the novelty is that the appearance of the carbine is completely identical to the Kalashnikov AK-103 model machine, with the exception of small nuances, for example, the absence of a tide under the bayonet knife and a ramrod.


The appearance of the new carbine of Izhevsk gunsmiths almost completely repeats the AK-103 submachine gun and the Saiga rifled carbine, however, the novelty can be purchased under the usual license for a smooth-bore weapon. At the same time, the TG2 carbine predictably looks impressive. There is nothing strange in this, since the Kalashnikov AK-103 assault rifle was created as an individual weapon for army and special units. Like its elder combat relative, the new hunting smooth-bore carbine received a plastic butt-folding butt with left hand firing when the butt was folded. The presence of a folding butt simplifies the ease of handling weapons during movement and transportation. Also on the TG2 carbine there is a side bar for mounting brackets and army sights on three rivets and a muzzle brake compensator on a standard thread M24x1,5 (right).

The 2017 version of the smooth-bore carbine TG2 has received a new cartridge feed ramp (supply guide, the so-called "rusk"), which improves the reliability of feeding cartridges from the magazine to the chamber, including the use of cartridges with half-shell bullets. Instead of the standard magazine for the Saiga-MK series carbines, a new, specially modified for the .366 TKM cartridges shop with a capacity of 10 cartridges was used. The trigger mechanism is made non-removable. On the Kalashnikov TG2 carbine there are Picatinny-type slats at the bottom and on the sides of the forearm, they are fully fit with it. The safety lever was made with an additional protrusion near its axis, especially for the index finger arrow. An aiming device with markings up to 1000 meters is used as sighting devices, that is, an open mechanical sighting device of the AK-74, AK-103 type.

The peculiarity of this smooth-bore carbine is the used cartridge of the .366 TKM caliber (9,5x38 mm). The unique cartridge has ballistics similar to the cartridge 7,62х39 mm and allows you to accurately hit targets at distances inaccessible to conventional smooth-bore weapons. According to representatives of the “Kalashnikov” concern, the ballistics of this cartridge is similar to a rifle at the 100 meters distance.

It is worth noting that the hunting cartridge caliber .366 TKM (9,5х38 mm) was the first developed in Russia since 1991, that is, after the collapse of the Soviet Union, and then launched into high-volume production. This cartridge is used in a smooth-bore weapon with a partially cut stem “Paradox” or a special rifled nozzle of the “Paradox” type, as well as with trunks with a Lancaster drill. In a smooth-bore Kalashnikov carbine TG2, the “Paradox” chrome-plated barrel is used with cutting in the muzzle of the barrel with a length of 120 mm. The “paradox” or the Fosbury drilling is a special kind of hunting weapon, in which the smooth barrel has cutting in the muzzle part, as well as the name of the cutting itself. This design allows you to significantly increase accuracy when firing bullets with a bullet, at the same time leaving the opportunity to shoot shot.

The .366 TKM cartridge was specially designed for use in long-barreled smooth-bore weapons. A feature of the cartridge is its design, thanks to which the ballistic characteristics of the ammunition are close to analogues designed for use in rifled weapons. Such a convergence of the two cartridges is unique for the domestic market of ammunition and the world market as a whole. From the point of view of Russian legislation, this cartridge is a cartridge for smooth-bore weapons. The caliber of the cartridge is specified in fractions of an inch, and the abbreviation "TCM" means the developers of the cartridge-weapon complex, ZAO Tekhkrim (Izhevsk [TC]) and OAO VPMZ Molot (Vyatskiye Polyany [M]). In particular, in Vyatskiye Polyany, this cartridge was used for the carbine VPO-208 and VPO-209 (peresstvlennye SKS and AKM) and hunting carbines VPO-212 and VPO-213.

To use the .366 TKM ammunition, the weapon design must provide for the use of a special nozzle of the “Paradox” type or the rifled part of the barrel bore with a length of no more than 140 mm. The positioning of the .366 cartridge in the weapon chamber is carried out along the barrel (by analogy with pistol ammunition). This cartridge was based on the 7,62x39 mm cartridge case of the 1943 model of the year. The manufacturer and developer of this hunting ammunition is Izhevsk CJSC Tekhkrim, he also owns a patent for development. 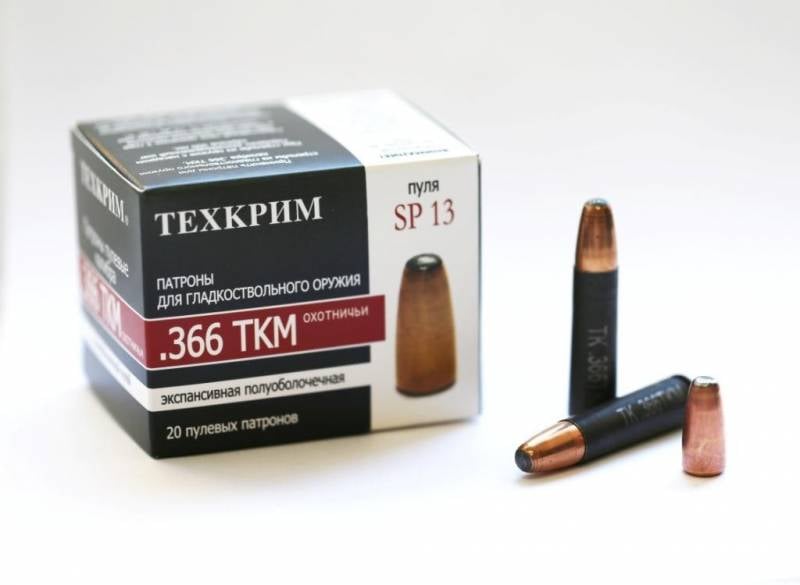 The start of sales of the new smooth-bore Kalashnikov TG2 carbine is expected in December 2017 of the year. According to preliminary information, the price of a new smooth-bore carbine from Izhevsk gunsmiths will be comparable to the cost of Saiga carbines of the same caliber. That is, approximately the new product will cost about 33 thousand rubles.