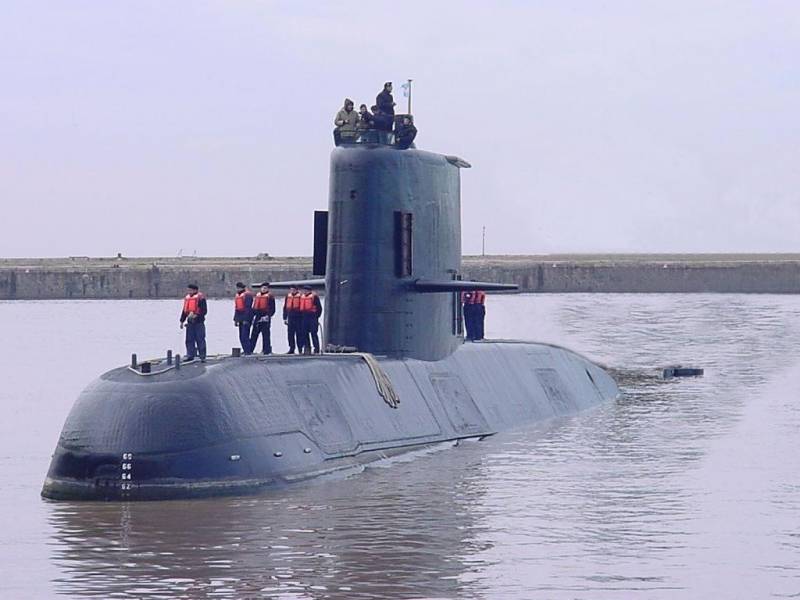 Disasters in the underwater navy if not frequent, then permanent. Service in the submarine fleet implies an increased risk. There is not a single fleet in the world where accidents or catastrophes with submarines do not happen. This is normal.

We are quite persistently asked about our version of the death of the Argentine submarine "San Juan". It is clear that, not being submariners, we could not give a competent analysis of the situation. Therefore, they specifically waited for the experts to speak out. In addition, the search for the Argentine boat came to the level of the presidents of the countries.

Recall history catastrophe. Argentina's San Juan military submarine disappeared on November 15. It was November 15 that recorded the last radio session. The vessel disappeared from radar off the coast of Argentina, about 250 nautical miles (400 km) from Buenos Aires.

Strange, but officially the search for the boat began on November 17. The Argentine Ministry of Defense used three ships to search. Sarandi, Rosales and Drummond. In fact, the entire economic zone of Argentina in the area of ​​Puerto Madrid was examined by ships and a helicopter from Sarandi.

It should be noted that many of the maritime powers of the world responded to the misfortune of the Argentine sailors. Russian President Vladimir Putin held talks with his Argentine counterpart Mauricio Macri, who offered us our help.

As a result, the An-124 aircraft and the oceanographic research vessel Yantar were sent to help the Argentines. The equipment, which is on board the "Amber", not only allows you to classify underwater objects, but also able to raise them to the surface.

Since Yantar will be able to arrive at the search site only within a week, Russia sent a group of Navy rescuers by air to BTA. The group is equipped not only with diving equipment, but also with the Panther Plus submersible. Such a device can in a controlled mode explore objects at a great depth (up to 1000 meters).

Mutual aid at sea is an ancient thing, like the sea itself. At sea, everyone is equal. No difference in ideology or race. All sailors. Together with the Russian An-124, the American Orion and Poseidon are flying in the sky over the crash site. And they offered their help to Chile, Uruguay, Brazil, Great Britain, South Africa ...

But back to what could have happened to the boat.

At the beginning of the strange, which gradually "emerge" during the search. The official version of the exit of the submarine in the sea - haul boats to another port. In principle, the task is routine. And no excesses should happen. Came and came.

However, the Argentine press found a completely “incredible” fact. On the eve of the exit two sailors "San Juan" were released from the ship for personal matters. One had a mother who was hospitalized, and the second needed to personally fill out papers to buy property. From this, the cause of the catastrophe was almost blown up, although the matter is absolutely everyday, moreover, even indirectly proving that going to sea was a routine one.

The second fact made me think about it.

On the boat was a 44 person. With that, the crew is a 37 man. It is reliably known that there were two combat swimmers from a special unit of the Argentine Navy and a military intelligence officer. We have no information about the rest of the "additional" crew members.

It turns out that the boat went to sea for a reason. Our version is testing new equipment as part of the upgrade. The boat, let's say, is very new, but Argentina today is not a country that can afford new warships. So the test version has the right to life.

Hence, two versions of what happened.

Incidents with diesel submarines are not uncommon. The reason is often the same. Battery malfunction. When charging or during battery operation, hydrogen is released, which causes fires inside the boat. 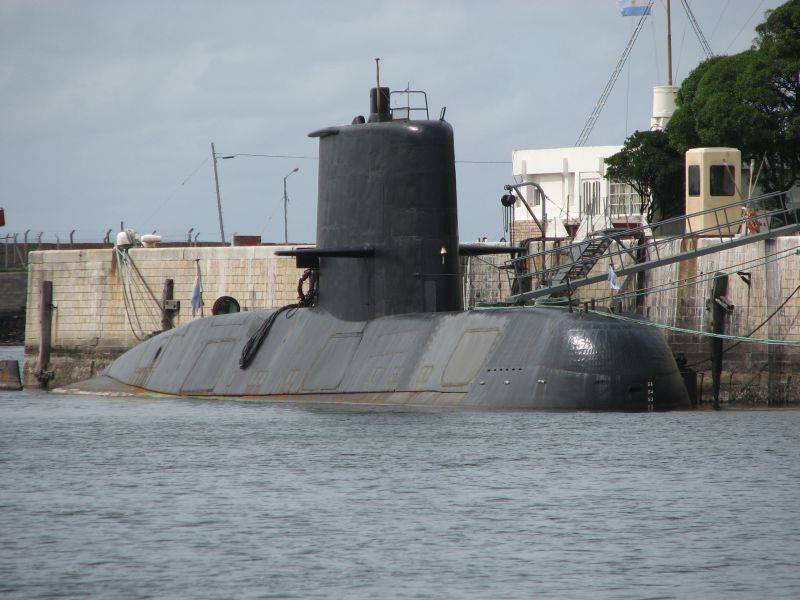 The boat consists of 4-x compartments. In the first compartment, divided into two floors and the hold, are the cabins of the officers and the captain, as well as the mess room. Below are the breech parts of torpedo tubes, automatic reloading mechanisms and torpedoes themselves. And in the hold batteries.

According to our consultants related to this topic, the incident could have happened there. In the battery pits. Trivial hydrogen explosion and the ensuing fire. Sailors reported a fire on the radio during the last session.

The explosion could lead to the destruction of the bulkheads and the further spread of fire in the compartment with ammunition. On this version ends, along with the boat. There were plenty of similar cases in history, and all of them basically ended with the death of a ship and crew.

A small nuance. Submarines of the type "TR-1700" are built on a single-hull scheme with a light hull in the fore and aft ends and a permeable superstructure in the central part. In the light body of the bow there are only tubes of torpedo tubes.

Submarines of the type "TR-1700" are armed with six torpedo tubes, the shooting of which is carried out by the German 533-mm anti-ship torpedoes SST-4 or the American 483-mm anti-submarine McNUMX using the samovodog method.

On the shelves of the torpedo deck are 16 torpedoes. Thus, taking into account those that are in TA, the boat can take on board up to 22 torpedoes. "TR-1700" is equipped with an automatic torpedo-loading machine that provides torpedo delivery from the rack, loading the TA and preparing it for a shot for 50 seconds. Next to the torpedoes on the racks can be mines, which are set through TA.

In general, there was something to jerk from the heart. Then everything is simple: the flow of water into the bow of the boat and, as a result, trim on the nose.

The boat simply dived from the flow of seawater. The crew could do almost nothing. Incident in the bow, by the way, can be explained by the absence of oil stains on the surface. The power plant in these boats is in the third compartment, closer to the aft. Diesel engines, fuel tanks and another compartment with batteries in the hold are located in that compartment. Accordingly, the compartment was not damaged and all the liquids that were in the compartment remained inside the boat.

If we say that "something went wrong" during the testing of new equipment is difficult. Just because there is no information on what the boat went camping with.

It is worth noting that the Germans, creating a boat, paid due attention to the means of salvation.

In the fence of the withdrawable devices of the submarine there is an airlock designed for four people to enter at the same time in light diving equipment.

In the first and third compartments (with batteries) there are hatches equipped with a coaming platform, through which in case of an accident the crew can enter a deep-sea rescue device of the DSRV type or a diving bell.

Possible exit of the crew and through the torpedo tubes.

None of the sailors could not leave the boat, which once again indicates that everything happened very quickly.

In a very logical version of the death of the submarine, which we painted experts, does not fit the message about the underwater explosion, which seems to have happened a week later in the search area.

The representative of the Argentine Navy, Enrique Balbi, officially stated: "Information was received that an anomalous, solitary, short, powerful non-nuclear phenomenon occurred, consistent with an explosion."

If this really happened a week later - this is one deal. If representatives of the Ministry of Defense of Argentina darken or retain something, then the version of the explosion of ammunition sets a fat point in the service of San Juan.

Versions always remain versions exactly until the moment when the boat is found and raised. Search work is ongoing. Just at the time when you are reading this article, our "Amber" will start them.

The search area is very approximate, as in the case of a Malaysian aircraft that fell somewhere in the ocean. But all versions, even the most "crazy", will exist exactly until the moment when the boat was found and lifted.

Ctrl Enter
Noticed oshЫbku Highlight text and press. Ctrl + Enter
We are
Results of the week. "Who you are lucky, in fact, and will carry a cock, and such a bird as you, I, too, will rush!"Reports from the militia of New Russia for 27-28 September 2014 of the year
Military Reviewin Yandex News
Military Reviewin Google News
16 comments
Information
Dear reader, to leave comments on the publication, you must sign in.