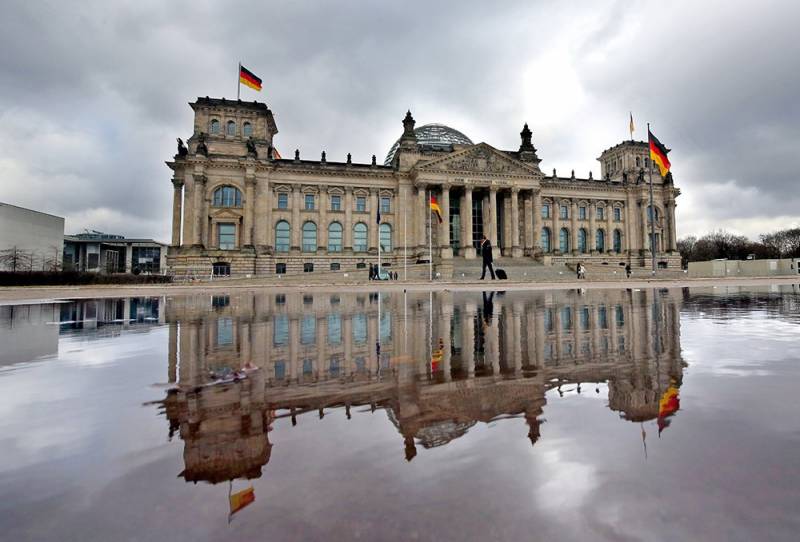 The arguments that critics have expressed against PESCO can also be applied to the security and defense policy of Germany as a whole.

If a casual German on the street is asked what PESCO is, he will most likely say that this is such a gorilla, and not at all the "cornerstone of European Union security." Why? In the 1999 year (ironically, it was then that the Treaty of Amsterdam, which became the basis for the future of PESCO, entered into force) at a zoo in the city of Saarbrücken brought a male gorilla named Pesco. If you set a search for the word "pesco" in the German press, then, most likely, all the links will tell about a beautiful gorilla with a silver back, but not about the European defense initiative.

The PESCO agreement was signed with great fanfare in Brussels on Monday. At the same time, a conference on NATO issues was held in Berlin near the Brandenburg Gate. When the panel on European defense ended, several people complained that some speakers used the abbreviation “PESCO”, “which no one knows and does not understand.”

Therefore, it seems, it is necessary to conduct a PR campaign in support of the plans of the European Union to create a Permanent Structured Cooperation in the field of security and defense. In the German media there were notes about the signing ceremony, but most reporters rewrote the same press release word for word, telling the same history about how Europe seriously bothered to the problem of defense because of the Trump policy of intimidation and how, thanks to Brexit, the United Kingdom could no longer prevent it.

Of course, even in pro-European Germany it was impossible to expect that any EU initiative would be carefully studied. Berlin is occupied by the Jamaican coalition. But the PESCO project interested the Germans, because it was “a big step towards [European] self-confidence” (Foreign Minister Sigmar Gabriel) and “one more step towards the creation of a European army” (Defense Minister von der Lyayen). It seems that everything is really serious.

However, not all ratings were positive. Nick Whitney from the European Union for Foreign Affairs, the first executive director of the European Defense Agency, claims that PESCO began to take on everyone (this was Germany’s demand), including those countries that joined only to delay its implementation. So did, for example, Poland. “All this is somehow foggy and has existed on paper for a long time.”

Unfortunately, this can be said about all the alleged interest of Germany in matters of security and defense. I recently arrived in Berlin and met with members of the German Security and Defense Community for several weeks. It became clear that there is a huge gap between how the Germans assess their efforts to strengthen European security, and how they see it in other EU countries.

Berlin’s view is understandable: Germany has gradually intensified since the 1990s. The invasion of Kosovo violated the ban on military intervention. Afghanistan has proven that you can rely on Germany. Germany is now dealing with the issue of Mali, and a number of influential politicians continue to emphasize Germany’s readiness to do more in this direction. Germany took the lead in creating PESCO. So everything is definitely moving in the right direction for the Germans.

Unfortunately, from the outside it looks a little different. Opinions begin to diverge after Kosovo. Although the German military is very proud of its participation in operations in Afghanistan, the Allies have complained about many conditions and reservations. Observers criticize the key role of Germany in NATO, calling it politically valid, but completely absurd in defense. Units are scattered far from each other and cannot interact effectively. And now the image of PESCO can be spoiled by the demand of Germany to take into the composition of everyone

There is some truth in the first and second cases, but these inconsistencies cause mistrust. The Germans are proud that they have achieved a lot. But European partners roll their eyes when they hear about it.
PESCO can avoid this attitude. This is only a vector, not a hard course, and we are still in the early stages, when vague declarations of intent need to be filled with concrete content. 47 projects are already being discussed; 10 of them must be taken by the end of the year. Participants can find a way to achieve greater closure of the structure, so that no one can interfere with their ambitions and the implementation of some projects.

Sofia Besch from the European Reform Research Center notes that Continuous cooperation can be made stronger if you create “an effective effectiveness evaluation mechanism, according to which Member States will have to report on the results of their activities. If they are unable to fulfill their obligations, this will lead to their exclusion. PESCO can even help develop a European strategic culture and push Germany to go beyond the statements made. Sometimes you can and dream. Let's hope that PESCO will not suffer the sad fate of the gorilla Pesco, which, as noted on the website of the zoo, "still has no offspring."

Ctrl Enter
Noticed oshЫbku Highlight text and press. Ctrl + Enter
We are
A great interview with Sergey Lavrov: about Ukraine, Obama and IranWhat you didn't want to know about England
Military Reviewin Yandex News
Military Reviewin Google News
3 comments
Information
Dear reader, to leave comments on the publication, you must to register.