Moscow, it's time to remember your own bloody bill to Warsaw

November 30 2017
29
Another day of remembrance may appear in the state calendar, this time dedicated to the soldiers of the Red Army who were tortured to death in Polish camps in the early 1920s. Usually Moscow in historical disputes with Warsaw only defends itself, but has the opportunity to expose her and his own bloody account, because we are talking about tens of thousands of lives. 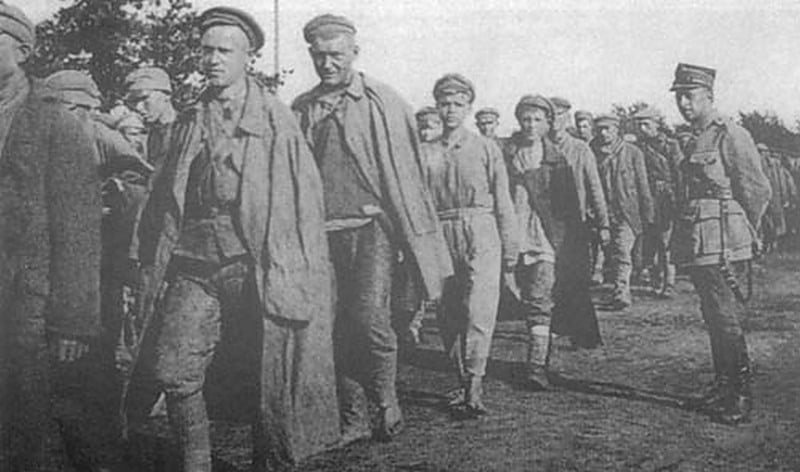 Relations between Moscow and Warsaw are now such that it is practically nowhere worse. Infinite conflicts concern not only current disagreements, but also historical claims to each other. It even reached such a specific practice as the mutual expulsion of historians.

The list of offenses presented by modern Poland to modern Russia is the suppression of numerous Polish uprisings of the 19th century, Katyn, the defeat of the 1944 Warsaw uprising of the year by the Hitlerites (the essence of the claim was that the USSR did not provide the necessary assistance for political reasons). More recently, in the same series and the death of President Lech Kaczynski in a plane crash near Smolensk: the ruling law and justice party claims that there was a collusion between former Prime Minister Donald Tusk and Moscow, the possible purpose of which was to eliminate the head of the Polish state.

The Polish pans consider deliberately defiant behavior towards Russia, among other things, as a continuation of the traditions of the Polish-Lithuanian Commonwealth, which for several centuries rivaled its powerful eastern neighbor. In this case, history serves politics and economics.

All these years, the Russian side has shown restraint, trying to object in essence to the accusations scattered around Warsaw. But the campaign with the demolition of monuments to Soviet soldiers, it seems, overflowed the cup of patience. There was an idea to put forward counter claims to the Poles, especially since there is no need to look for a reason for long: the tragedy of Soviet prisoners of war in Polish camps is often mentioned by historians and publicists.

Member of the State Duma Committee on Education and Science, co-chairman of the "Immortal Regiment" Nikolai Zemtsov proposed an amendment to the law "On the days of military glory and memorable dates in Russia." If the initiative is approved by the majority, February 17 will be the Day of Remembrance of the Soviet soldiers who died in Polish captivity from 1919 to 1922 year (the date is timed to the first incident of captivity). Such a move could be a retaliatory move by Moscow in the “war on historical fronts” unleashed by Warsaw.

An explanatory note to the Zemtsov bill states that during the Soviet-Polish war, thousands of people were taken prisoner from 165,5 to 206,8. Of these, only 65 thousands have returned home. “The fate of the others is not known for certain, but today we can say with confidence that at least every sixth Red Army soldier who was captured died in the Polish camps,” the deputy said. He insists on the need to formally investigate those events.

According to Russian historians, from 28 to 80 thousands of fighters from among those captured in Polish captivity died from unprecedented harsh conditions, hunger, cold, and disease.

Or they were simply killed by the Poles. Many of the dead found rest in two large cemeteries in Tucholi and Strzalkowo.

Cursing the USSR for Katyn, the Poles do not like to remember how they themselves treated the Soviet prisoners. They don’t rush to repent for the brutal destruction of tens of thousands of Red Army prisoners in concentration camps, historian Igor Gusev said in an interview with the VZGLYAD newspaper correspondent.

“Poland has a very flexible moral position regarding the past. I remember how at one scientific conference the Polish historian ardently denounced the Soviet regime for the "criminal Molotov-Ribbentrop Pact." When he was asked a reasonable question, did he consider the capture of Poland’s western territories of Ukraine and Belarus by Poland in 1920, the Pole thoughtfully chewed a sponge and then uttered a marvelous phrase: “This is not a good thing!” He said.

There was a concentration camp

As is known, that war ended unsuccessfully for the USSR. Polish expansion was replaced by the onset of the Red Army, but it eventually led to the catastrophe near Warsaw. The defeat and the subsequent retreat of the Reds led to a large number of prisoners in the hands of the Poles.

A member of the International Committee of the Red Cross described the camp in Brest as follows: “A nauseous smell emanates from the guard houses, as well as from the former stables in which prisoners of war are housed. Prisoners chilly huddle around the improvised stove, where a few logs burn - the only way to heat. At night, hiding from the first cold weather, they are packed in close rows in groups of three hundred people in poorly lit and poorly ventilated barracks, on boards, without mattresses and blankets. The prisoners are mostly dressed in rags ... Due to crowding, close living together healthy and infectious, malnutrition, as evidenced by numerous cases of exhaustion ... the camp in Brest-Litovsk was a real necropolis. "

But the description from the historian Gennady Matveyev: “The prisoners were kept in damp, poorly heated, unventilated barracks and half dugouts, there were no senniks and blankets, not to mention bed linen, fed irregularly and half-starved, including as a result of theft of camp workers. Severe and at times cruel treatment of prisoners, lack of shoes and clothes, low capacity of baths, laundries, disinfection facilities did not allow for normal sanitary conditions, and the lack of essential medicines and insufficient number of places in camps hospitals led to epidemics of infectious diseases from flu to typhus and cholera. ”

In Poland, they do not question the harsh conditions in the Red Army camps, but they are trying to challenge the number of prisoners of war and deceased. In particular, they accuse Russian researchers of “those who are trying to increase the number of Red Army prisoners captured by Polish troops by almost one hundred percent.” It is also alleged that about 25 thousands of prisoners of the Red Army fighters, under the influence of agitation, joined the anti-Bolshevik formations fighting on the Polish side. They did not become ideological fighters against Bolshevism, but wanted to leave the nightmarish camps at all costs.

At the same time, Polish historians leave room for maneuver, declaring that a significant part of the archives of that time did not reach us.

“In inter-war Poland, a special institution was created to register the servicemen of other armies taken into Polish captivity. Poland then had to fight with the Ukrainian state, and with the revived Czechoslovakia, and with Lithuania, and with Bolshevik Russia. In addition, interned soldiers of the Kaiser army were in Poland. Polish officials kept records of all prisoners of war, and this work was carried out until the 1939 year, i.e. right up until the beginning of the Second World War. All this documentation was located in the forts of the Warsaw Fortress and died during the bombings of the Luftwaffe in the first days of the war, ”says a professor at the University. Nicolaus Copernicus in Torun Zbigniew Karpus.

He insists that the total death toll did not exceed 15 thousands of people, and most of the prisoners later returned to their homeland. As for the inhuman conditions of detention, this was also justified: “At the time of the outbreak of war with Soviet Russia, Poland was an extremely poor and weak state. Around the enemies, the economy is destroyed, no infrastructure. And in this situation, the issue of the content of prisoners was relegated to the background. Poland was simply not ready for this. ”

"Someone in the ripped belly sewn up a cat ..."

Soviet-Polish war in general is rich in gloomy episodes. There are facts of ill-treatment of Poles not only with prisoners of war, but also with civilians. At the beginning of 1919, the Polish army, commanded by Edward Rydz-Smigly, launched an offensive to the east — as soon as it was formed, the new-old state immediately began territorial seizures. What the Poles did in the regions of Byelorussia and Ukraine that they captured, except as a nightmare. An eyewitness testifies:

“During the occupation, killing one of the local residents was not considered a sin. In the presence of General Lisowski (commander of the operative group in Lithuania - approx. LOOK) the child was shot for allegedly smiling unkindly ... One officer shot dozens of people for being poorly dressed ... People were robbed, they were whipped from barbed wire, burned with a hot iron to get false confessions ... Once they argued about a pledge: someone sewed a cat in a torn belly and took bets who would die earlier - a person or a cat. "

“In the villages, we killed everybody and burned everything at the slightest insincerity. I personally worked butt.

“The occupation of cities and localities was accompanied by arbitrary reprisals of the military with local government offices, as well as Jewish pogroms, issued for acts of eradicating Bolshevism. So, after the occupation of Pinsk by the order of the commandant of the Polish garrison on the spot, without trial, about 40 Jews were shot, who came for prayer, who were taken for a meeting of the Bolsheviks. The hospital medical staff was arrested and several orderlies were shot ... The capture of Vilno was accompanied by arrests of the local population, sending him to concentration camps, torture and torture in prisons, and executions without trial, including the elderly, women, children, Jewish pogroms and mass robberies. At the same time, the Poles called themselves the bastion of Christian civilization in the fight against "Eastern barbarism."

The events of those years make it possible to better understand the roots and the subsequent Volyn tragedy, which today has caused a serious political conflict between Kiev and Warsaw.

“In the occupied regions of Ukraine, the Poles robbed the population, burned entire villages, shot and hung innocent citizens. Tortured prisoners of war. In the city of Rivne, more than 3 thousands of civilians were shot. Corporal punishments were introduced for Ukrainian peasants who did not want to provide the Polish army with food, arrests and executions of civil servants, confiscation of property and Jewish pogroms were carried out. For refusing to provide food, the villages of Ivanovtsy, Kucha, Sobachi, Yablunovka, Novaya Hreblya, Melnychi, Kirillovka, and many others were burned. Residents of these villages were shot with machine guns. In the town of Tetievo, during the Jewish pogrom, 4 thousands of people were slaughtered, ”writes journalist Sergei Lozunko, who specializes in military historical essay.

Against this background, the cruelty of the Poles to the prisoners of war of the Red Army is unlikely to be surprising.

By the way, the Poles believe that the current Russian initiative with a day to commemorate the dead and overwhelmed is not at all new - allegedly Mikhail Gorbachev planned something similar. “November 3 1990, he ordered the USSR Academy of Sciences, the Ministry of Defense, the KGB before 1 April 1991, to collect all the documents and materials about those historical events where Poland had damaged the Soviet state. Let me remind you that at that moment the Kremlin acknowledged responsibility for the crime committed in the spring of 1940 in Katyn. But then he decided to protect himself by developing an "anti-Katyn" in the form of the tragic history of captured Red Army soldiers. As a result, today we have what we have, ”says Professor Karpus.

But even if we admit that Moscow began to prepare this "trump card" in advance, it was in no hurry to use it until recently.

Ctrl Enter
Noticed oshЫbku Highlight text and press. Ctrl + Enter
We are
About Stalin and KhrushchevWhat you didn't want to know about England
Military Reviewin Yandex News
Military Reviewin Google News
29 comments
Information
Dear reader, to leave comments on the publication, you must to register.