November 30 2017
15
It is far from always that an intruder who has fallen into a closed area should be disarmed with a small firearm. weapons or other lethal systems. In many situations, nonlethal neutralization agents that do not pose a serious threat to the health or life of an attacker can be useful. Not so long ago, the Russian industry introduced the original security system that can prevent penetration into the forbidden areas. This product was designated as a remote stun mine MEN-5 / 10.


The project of a prospective security system was developed by the designers of RTEX-BUT Joint-Stock Company (settlement of the Ostankino Sovkhoz, Moscow region). Last year, this company introduced the Gard multipurpose remote-contact electroshock device and a special ammunition for it - the KTR discharge discharge cartridge. This electroshock complex was implemented in a pistol form factor. The ideas that underlay the Gard / KTR project were further developed and led to the emergence of a stationary system of a similar purpose.

A new project of a non-lethal security system was called MAN-5 / 10 - “Electroshock Directional Damage”. This project was developed relatively recently. For the first time, a new product was shown to specialists and the public in mid-October at the exhibition of weapons and special equipment "Interpolitex-2017". Representatives of the company-developer showed a demo of the new mine, and also told about its capabilities. 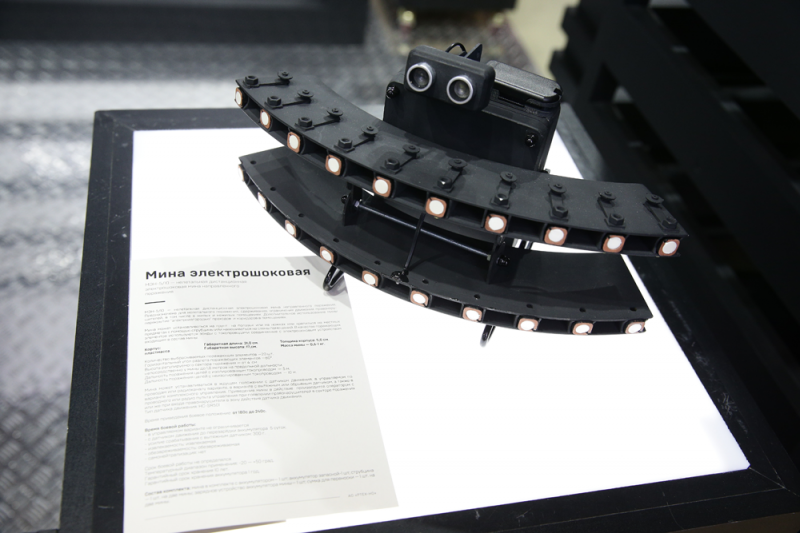 The product MAN-5 / 10 is intended for the protection of various buildings and structures, premises, corridors, etc. The use of such means for the organization of protection of open spaces is also not excluded - in this case, the mines perform the functions of an “electric fence” that is triggered when there is a threat. The design of mines allows you to organize the protection of an arbitrary perimeter in a certain range of heights.

The defeat of the intruder is made using an electric discharge with the required parameters. Having received the discharge, the intruder temporarily fails, which allows the protection of the object to detain him without any serious difficulties or problems. At the same time, the offender himself gets off with a relatively light electrical shock of the first or second degree.

The electric way to hit a target gives obvious advantages over other mines. Unlike other mine weapons, capable of independently “keeping watch” and protecting specified areas, a product such as MAN-5 / 10 represents the minimum danger to the health and life of the intruder, surrounding and protected object. When such a mine is fired, no blast or fragments are formed that threaten people, buildings or equipment.

The demo model of the MAN-5 / 10 stun mine shown at a recent exhibition was distinguished by its relatively simple design. Curiously, the appearance of this product does not reveal its purpose. At the same time as part of the mine there are all the necessary components and devices that provide work both in automatic mode and with remote control.

Exhibit sample mines placed on the stand with a simple stand. A simple construction with a lower support frame of sufficient size and side support elements was made of a metal rod. On the latter there was a box-shaped case with control equipment, batteries, etc. On top of a large box was a smaller case, on the front wall of which there was a pair of motion sensors in round cases.

In front of the proposed mine is a relatively complex structure that serves as a launcher for special ammunition. With the help of a frame with hinges on the case two starters are attached. As follows from the available data, when placing mines at the position, the launching devices can be installed with the required elevation angles, which ensures shelling of targets in a given sector of space. The angles are determined in accordance with the characteristics of the protected premises or area.

The starter is a unit with a curved body consisting of a pair of horizontal plates. Between the plates is mounted 10 containers-shafts for placement of cartridges. In addition, the device is equipped with wires of the electrical control system, providing a start. As part of the mine MEN-5 / 10 there are two starters mounted one above the other. Thus, the total ammunition mines consists of two dozen cartridges.

Apparently, for defeat the purpose it is proposed to use the so-called. cartridges of transportation of KTR discharge, similar to those used with the Gard system. The KTP for the “Garda” is a device in a rectangular case with a length of 55 mm and width and height of 12 mm, having a mass of just 12. Inside the cartridge is a metal missile probe, made in the form of a relatively heavy cylindrical block with hooks. The probe is connected to a thin wire with a length of 3 m (insulated) or 10 m (without insulation).

In the main body of the mine is its own battery, which ensures the operation of electronics in standby mode for five days. If necessary, the product can be connected to existing power supply networks, which removes any restrictions on the duration of duty.

Remote or autonomous systems can be used to detect targets and issue a firing command. In automatic mode, the mine independently monitors its zone of responsibility with a pair of built-in motion sensors. When a moving object is detected, a command is issued to trigger the starters. In the remote control mode, the task of monitoring the territory is assigned to an operator located at a distance from the mine. He also gives a command to use cartridges and defeat the target.

As part of the electrical systems of the mine there is a stun device that provides current with the desired parameters. The outputs of this product are connected to the corresponding wires of the starters and discharge transportation cartridges. The electroshock device is triggered by a command of control systems.

The principle of operation of mines MAN-5 / 10 is quite simple. The device is mounted on the required position and monitors the specified sector. If an intruder appears in it, the mine independently (in automatic mode) notices him and, at the right moment in time, commands the use of launchers. With manual control, the time of the shot with the release of probes is determined by the operator. Further actions mines are similar for both modes.

At the command of the operator or automation, the mine produces shooting of a pair of KTR cartridges. Under the action of expanding gases formed by the propellant charge, the cartridge probe flies out to the target, unwinding a thin wire up to 10 m. Due to the design of the cartridge wires do not sag and do not intersect, which eliminates a short circuit when using uninsulated conductors. It is reported that the mine man-5 / 10 in the configuration for power structures strikes the offender with a discharge power of 10 watts.

Without reloading the launchers and replacing used mine cartridges, 10 twin shots can be made. In addition, it is possible to fire volleys from 20 probes with wires. In this case, the mine simultaneously “covers” the entire controlled sector and is capable of hitting several targets at once in its area of ​​responsibility. Apparently, the shooting mode is chosen by the operator or automation in accordance with current conditions.

Much of the parameters of the mines have not yet been announced. To assess its capabilities, you can consider the characteristics of a wearable "Gard" system. The electrical means of this product give an impulse of duration 75-90 μs with a peak no-load voltage 50 kV and with a load 1,3 kV. The average time to neutralize a “person” target is defined in 1-5 seconds. It can be assumed that the mine MANH-5 / 10, using similar operating principles, has similar performance characteristics and combat capabilities.

A new-type electroshock mine can be used to protect various objects, buildings and premises. The configuration of protection systems, the composition of the means of detection, the method of power supply, etc. determined in accordance with the features of the protected object, the tasks, etc. It is alleged that the mine can be used both indoors and outdoors. The equipment operates at air temperatures from -20 ° C to + 50 ° C.

It should be noted that there are certain restrictions on the operation of the MEN-5 / 10 mines. First of all, this product should not be used in precipitation conditions or in another situation, implying the presence of large amounts of water. The use of electroshock equipment in such conditions may lead to unintended consequences. In addition, in some situations, the operator needs to take into account the risks associated with age or the state of health of the “target”.

Perspective stun mine directed damage, above all. intended for deliveries to the armed forces and law enforcement agencies. The army, the structures of the Ministry of the Interior and the Federal Security Service may show interest in similar means of perimeter protection and express a desire to acquire a certain number of mines. It can be assumed that serial mines for certain customers will definitely differ from the exhibition sample, shown in October. Such differences will be associated with the special requirements of different customers and the specifics of the intended use of mines.

It is curious that such devices can find their customers in the civilian market. After a simple refinement of electrical systems, limiting the characteristics of a stun device, the MEN-5 / 10 can meet the requirements for civilian self-defense systems. In this case, the power of the electric discharge is limited to 3 watts, but even after such modifications, the product can have the desired capabilities and solve the tasks assigned to it.

However, while the project of the MAN-5 / 10 electroshock mine is in its early stages and is probably not yet ready for mass production in the interests of these or other customers. If security forces are interested in such non-lethal security systems, RTEX-BUT will be able to start mass production. In addition, while it is impossible to exclude the possibility of the appearance of a civilian version of a mine, characterized by reduced characteristics and complying with legal requirements.

For the solution of problems of protection of objects can be used various systems of observation and destruction. The original method of dealing with violators was proposed in the project of a stun mine aimed at defeating MEN-5 / 10. As far as is known, such a product has so far been used only as an exhibition exhibit, but in the near future, law enforcement agencies can order similar products and proceed to their placement on protected objects.

Ctrl Enter
Noticed oshЫbku Highlight text and press. Ctrl + Enter
We are
Pacifying the crowd: non-lethal weapons in search of the right momentReports from the militia of New Russia for 13-14 September 2014 of the year
Military Reviewin Yandex News
Military Reviewin Google News
15 comments
Information
Dear reader, to leave comments on the publication, you must to register.