November 30 2017
72
The Central Telegraph Agency of the DPRK (TsTAK) on the eve of almost the entire day published statements by representatives of the country's leadership on the successful launch of an intercontinental ballistic missile "Hwaseon-15" capable of carrying a nuclear warhead. The rocket flew over 950 km and fell in the Japanese economic zone about 250 km from Aomori Prefecture. The launch was carried out from the Pyongson area in 3 h 17 minutes. It is noted that the rocket rose to a height of 4,5 thousand. Km. Announcer TsTAK loudly informed the citizens of the DPRK (and first of all - the citizens of the United States) that the tested rocket "is capable of destroying any object throughout the United States of America." 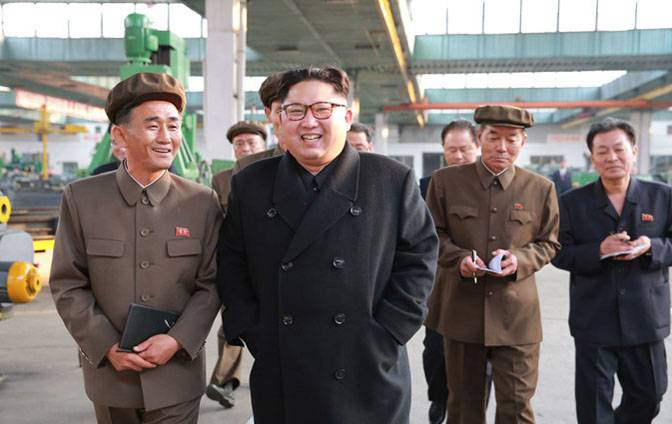 The order was personally given by the head of the DPRK, Kim Jong-un, who, after observing the launch of the missile launch, eventually made a short statement with a smile on his face: "This is a great success for the entire North Korean people."

So, according to Kim Jong-un, then the DPRK has a fully developed nuclear potential. How will North Korea take the status of a full-fledged nuclear player in the international arena, given that the so-called “international community” is allowing itself to use such definitions as “rogue state” and “state whose regime it is time to destroy” in relation to the DPRK?

It is quite understandable that the creation of a nuclear missile shield was carried out in the DPRK not at all so that, the very next day after the announcement of this creation, to carry out salvo launches of ICBMs in the United States, starting from the island of Guam. Yes, the Americans (including the forces of Tramp's rhetoric in the style of “It's time to destroy this upstart from North Korea”) have poured oil on the fire of the Korean crisis. But in Pyongyang, not idiots are sitting in order to plot the "incineration of the United States" not only in colorful pictures broadcast on local TV. Pyongyang may well begin such a game, in which it will definitely not be possible for the United States to dismiss North Korea and its interests as if it were an annoying fly. The little thought, “what if it really banged?” Sat firmly in the minds of American elites.

The first vulnerability “on the world stage” in connection with the statements of the DPRK was not discovered at all by the DPRK itself, but by its southern neighbor and, concurrently, the enemy. South Korean President Moon Jae-in stated that Pyongyang, while carrying out its missile launches, threatens the safety of athletes at the Pyeongchang Winter Olympics. According to the President of the Republic of Korea, it is necessary to create an effective security system that would offset the risks for the 2018 Games. Perhaps, for the first time in the history of human civilization, the threat to the Olympics is portrayed as a possible nuclear missile strike.

By the way, the French raised the first panic. They said in Paris that the French Olympic Committee might have to make a decision not to participate in the Fifth Republic athletes in the Winter Olympics 2018 of the year. On the Champs Elysées, French athletes are "afraid of a threat from North Korea." Apparently, someone in Paris seriously decided that Kim Jong-un would still give the order to "bang" a nuclear warhead on the object a couple of hundred kilometers from the border of the DPRK ...

These nonsense of the French, to whom official Seoul had to react, could, of course, be ignored. But “ignore” in this case, as diplomats say, is counterproductive. The situation is such that the Olympics in Pyeongchang can be a sign, first of all, for Russia and for our athletes. "Sign", rather, in quotes - for the reason that, against the background of total persecution of Russian sports, the Russian national team in South Korea can be prevented. Such statements come from sports federations, from national Olympic committees of different countries, from WADA. Given this, the French horror stories may even be useful to us ... How useful the presence of the nuclear missile potential of the DPRK, which it is called, “sags”, may also prove useful.

If a frank defamation has been started against Russia, which has even reached sports competitions, does the Russian Federation need to wipe the snot once again and keep silent? Shut up as it was with the blasphemous ban on the participation of Russians in the Paralympic Summer Games ...

If the situation really boils down to the fact that the so-called international community will once again approve of the removal of the Russian team from the Olympics, then for us there is no greater friend than Kim Jong-un ... Klin wedge, as they say. What is it all about?
1988 year. Olympic Games in Seoul. The DPRK leadership decides to boycott the Games, since the top of the IOC and South Korea have abandoned the idea of ​​holding a summer Olympics in the territory of both Koreas. In particular, the DPRK offered to hold some competitions in the framework of OI-88 and in Pyongyang. Then Albania, Cuba, Ethiopia, Nicaragua, Vietnam and Seychelles joined the boycott. Gorbachev USSR did not boycott the game. And, as the North Koreans themselves say today, the lack of support from the USSR caused a certain negative reaction, but today the DPRK understands that at that time any decisions in Moscow were made not in the interests of the USSR itself. The collapse of the country - the best proof of that. In general, nobody is angry with Russia for Gorbachev's “non-solidarity” in today's Pyongyang.

The main question is: will the DPRK send its athletes to South Korea in 2018? If Kim Jong-un remembers the principle of a unified Korea, then it is quite possible that Pyeongchang will remain without North Korean athletes. If you do not ask well ... Moreover, today is not 1988 year. Pyongyang can really create such conditions that the Winter Games will be canceled or postponed altogether. Moreover, to create "conditions" at the most inopportune moment for those who conduct the Games solely by their own rules. And for some reason it seems that the presence of North Korean and Russian athletes performing under the flags of their countries will be the guarantee for the Games in Pyeongchang.

The French, it turns out, not in vain "concerned." They understand that since Russia and the DPRK are accused of all mortal sins, then it is quite possible to expect an “otvetku” - a sort of asymmetric. Here it is worth remembering that the horror story №2 about North Korea after its “nuclear threat” is North Korean hackers. In general, for the Phyonchkhan Olympiad, only solid challenges ... Get information about the DPRK missile tests on the opening day - with the fall of the ICBM in the exclusive economic zone of South Korea, the "Friends of the DPRK" are unlikely to want. Well ... In this case, create a safety cushion, gentlemen partners. And this decision to participate in the games of athletes from the Russian Federation and the DPRK. And this is not an ultimatum of any kind. If today they frighten themselves in the absence of a threat, then what will happen tomorrow, right before the Games - eat yourself from paranoid thoughts about bombs and hackers Kim Jong Un.

So how many more ICBMs are there in store for Kim to test? ..

Ctrl Enter
Noticed oshЫbku Highlight text and press. Ctrl + Enter
We are
Report of the DPRK Embassy in the Russian FederationSituational analysis of the death of the MH17 flight (Malaysian Boeing 777), made on the basis of engineering analysis from 15.08.2014
Military Reviewin Yandex News
Military Reviewin Google News
72 comments
Information
Dear reader, to leave comments on the publication, you must sign in.