Russians will start a “new big war”: “Armata” tanks will go to Europe

November 30 2017
81
The "land campaign" of Russians to the West is already being prepared. The Russian army is "preparing for the next big war," writes one well-known analyst, pointing to the new formidable weapon Putin - Tanks "Armata". 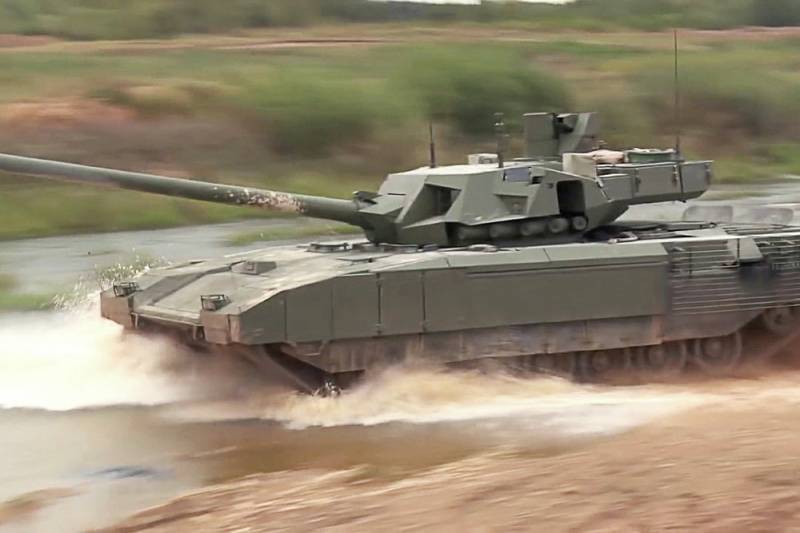 The new state armament plan for Russia, which is designed for the period of 2018 — 2027, reorients the Kremlin’s defense expenditures to ground forces, indicates Dave Majumdar.

In the previous armaments plan, which was designed for 2011 — 2020 years, the Kremlin “largely focused on the revival of the Navy.” Given the recent experience of Moscow in Ukraine and the fact that Russia is still a “Eurasian land power,” the analyst states: the shift “makes sense”.

“This is partly due to the experience of Russia in Ukraine, which leads to an increased perception of the possible relevance of ground forces in future conflicts, but this is mainly the result of the development of new armored vehicles and tanks for mass production,” Gorenburg writes in his new article.

The expert indicates that over the next eight years, the Armata, the Kurganets-90 infantry fighting vehicle and the Boomerang armored personnel carrier are expected to go into a series of T-14 and T-25 tanks. True, the number of tanks produced by “Armata” may be limited “due to the high cost of their production.”

In addition, Russia will continue to release new artillery and missile systems to replace old Soviet weapons. The expert points to the planned replacement of the Msta self-propelled artillery mounts with the Coalition.

However, despite the fact that the modernization continues, and the Russian ground forces receive new intelligence and observation systems, as well as new EW systems, "not everything is going well." The fact is that Russia, with its “network-centric war”, is behind schedule.

Mr. Gorenburg points out problems with tactical automated ground control systems. Initially it was assumed that by 2020, such systems would come in forty brigades. At the same time, the military in Russia “have mixed feelings” for these systems and “may decide that they need improvement” before they are adopted. In this case, the army may postpone the development of opportunities associated with network-centric wars until 2027.

In general, the Russian military is strong enough to “hold back all its neighbors in the post-Soviet space,” the analyst notes. However, the Kremlin "still has to rely on nuclear weapons to contain China and NATO."

Russia is already strong enough to defend itself in any war against any adversary and defeat any neighboring state, except China, Gorenburg believes. Therefore, “new purchases will be aimed at keeping up with technological improvements” that “have been achieved by competitors”.

Thus, Madjumdar sums up, let the pace of rearmament remain uneven, Russia continues to catch up with its competitors. However, “in certain areas” it will remain behind the United States and, possibly, China.

Recall, the mentioned SAU "Coalition" (or more precisely, the "Coalition-SV") is capable of firing at a speed of more than ten rounds per minute (according to some information, up to sixteen). The system includes a module with an anti-aircraft 12,7-mm machine gun "Kord". The machine gun is controlled remotely. This ACS is intended for the destruction of enemy artillery and mortar batteries, armored vehicles, air defense and missile defense systems, communications centers, command posts and manpower. The wheel version of the ACS is based on the four-axle chassis of the KamAZ vehicle. There is a tracked version. Calculation of SAU - three people. They are either in an isolated armored vehicle (tracked version) or in an armored KamAZ cabin. Also in the press it was reported that a coastal artillery system for the Russian Navy and a robotic artillery system, also remotely controlled, could be created on the basis of the “Coalition”.

9 May 2015, the new self-propelled howitzer 2C35 "Coalition-SV" was presented at the parade in honor of the 70 anniversary of the victory in World War II.

As for the verification of new technology, the state tests of this self-propelled, notes "Russian newspaper"will begin soon. This was stated by the chief designer of the Uraltransmash, where they assemble the tracked Coalitions, the base for which is the self-propelled chassis 2C5 "Hyacinth".

Compared with the "Mstoy-S" self-propelled "Coalition-SV" has a significantly increased maximum firing range (70 km vs. 29 km) and increased rate of 1,5 times the rate of fire. According to the estimates of the Ministry of Defense of the Russian Federation, in terms of the complex of characteristics, the new SAU exceeds analogous systems by 1,5 — 2 times. Compared with the M777 towed howitzers in service and the M109 self-propelled howitzer “Coalition-SV” It has a higher degree of automation, an increased rate of fire and a range of fire that meets the modern requirements for conducting general combat.

However, it was previously planned to put the Coalition into service in 2016. Now serial deliveries expected only in 2020 year.

It is probably from this that analysts hinted at the Russian “land campaign” and the “network-centric war”. 2020 year is the time of the planned deliveries to the troops of the Armath tanks. By the year 2020 said at the Army-2017 forum, Deputy Defense Minister Yury Borisov, the Russian army will receive up to one hundred new main battle tanks on the Armata platform.

Obviously, Mr. Majumdar and other analysts, whose opinion translates American publications, unite Russian new tanks, infantry fighting vehicles and armored personnel carriers into a single whole - into the concept of “network-centric wars”, when smart machines stuffed with electronics conduct smoothly combat operations according to a single program. That is why the Russians will put them in the army at the same time.

It turns out that 2020 year will be a terrible year for Europe. Many "concerns" will be expressed ...