November 30 2017
17
For the first time, the concept of “Captain Nemo's cemetery” (except for the world-famous primary source) in relation to the churchyard where the dead soldiers of the Zubkov battery were buried was mentioned in the Guards Heights collection of stories by Arkady Perventsov. But the author of this concept is not a military leader. He only quoted one of the Red Navy men, who at that terrible time was reading the works of Jules Verne. Torn away from the whole world, alas, to a nameless warrior, the battery seemed Nautilus, from which they descend to bury their fallen friends. 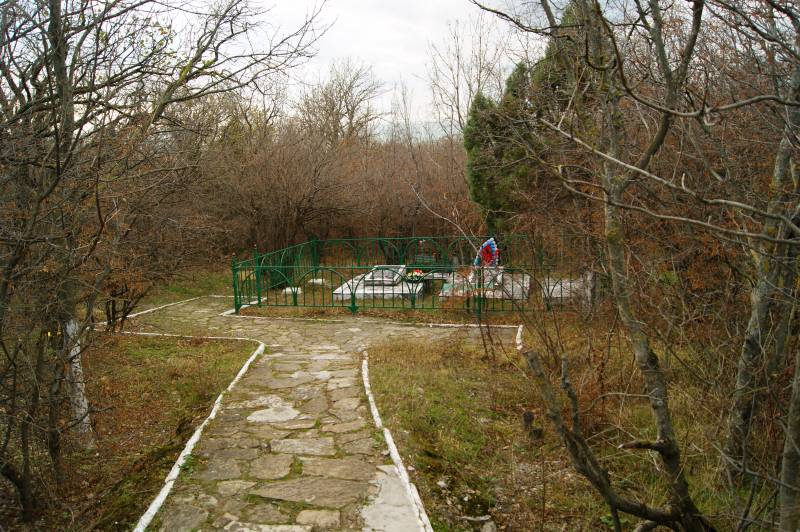 The cemetery is located directly on the territory of Peny Cape, away from the dangerous battery firing positions. To bury comrades elsewhere was impossible. The Hitlerites not only blew every meter of battery with bombs and shells, they also sinned with flights. Naturally, the commander did not want, after another hit, to open the graves and cover the fighters with the decaying remains of their comrades.

Penay Cape just suited for the "battery" of the cemetery. Far enough from the position of the gunners, but not enough to endanger the living fighters on the way. The rare surviving vegetation of the Foam, in contrast to the lunar landscape of the battery positions, slightly, but still masked the movement of the garrison during the funeral. During the war, the cemetery was fenced with ches and wire. Because of the constant fighting, the sailors sometimes could not even give a farewell salute to their comrades. But they spoke their guns, spoke loudly. 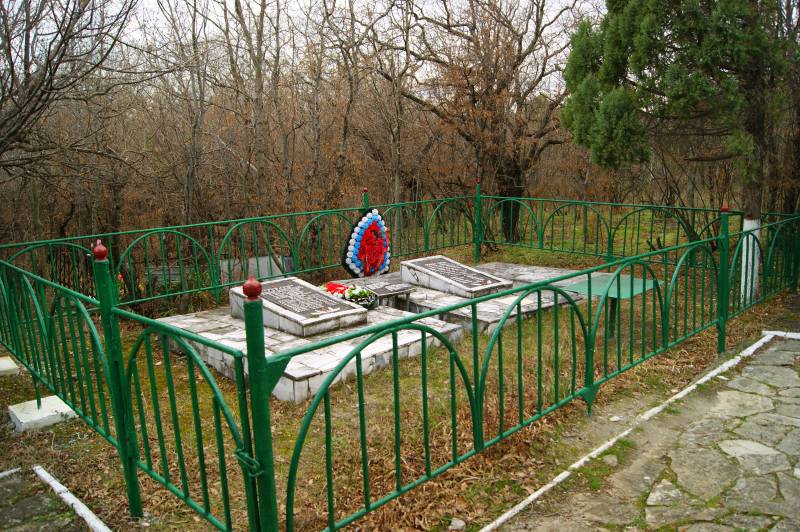 The graves, of course, were scattered. And, in fact, part of Cape Penny remains a cemetery, despite the fact that at the moment the “battery” cemetery is two modest obelisks with the names of those who died for a no less modest fence. The easiest way to get to the churchyard is through the underpass, led by a paved path leading away from the highway towards the seashore. 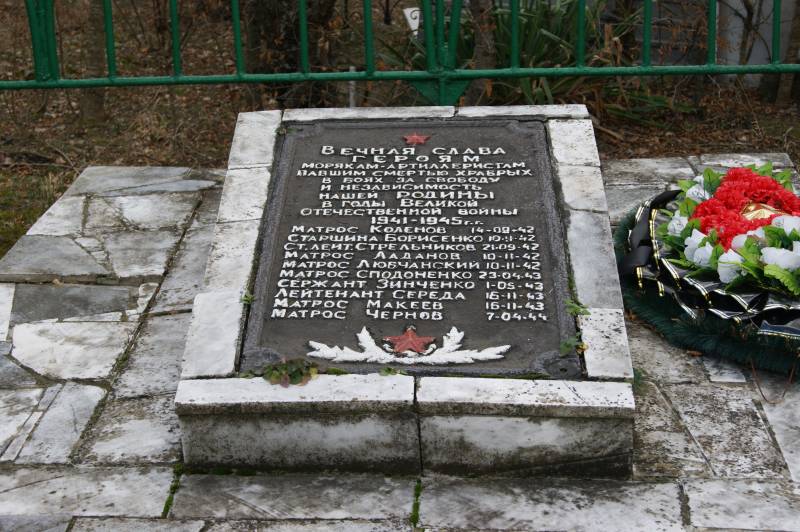 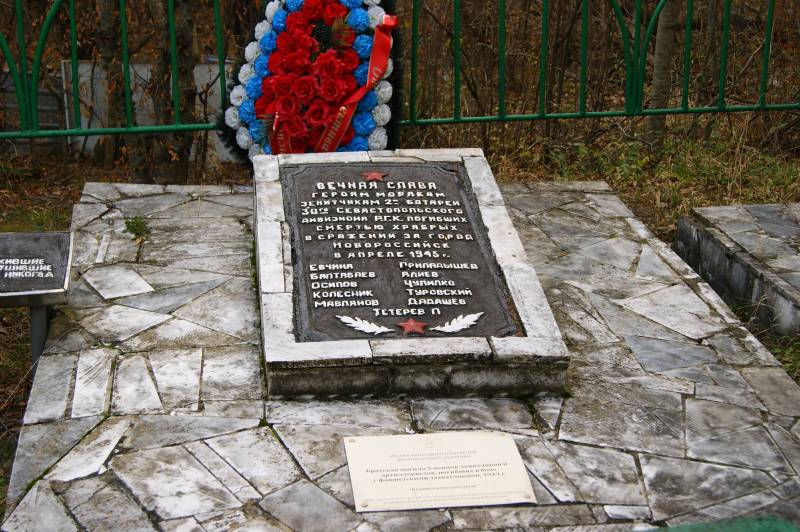 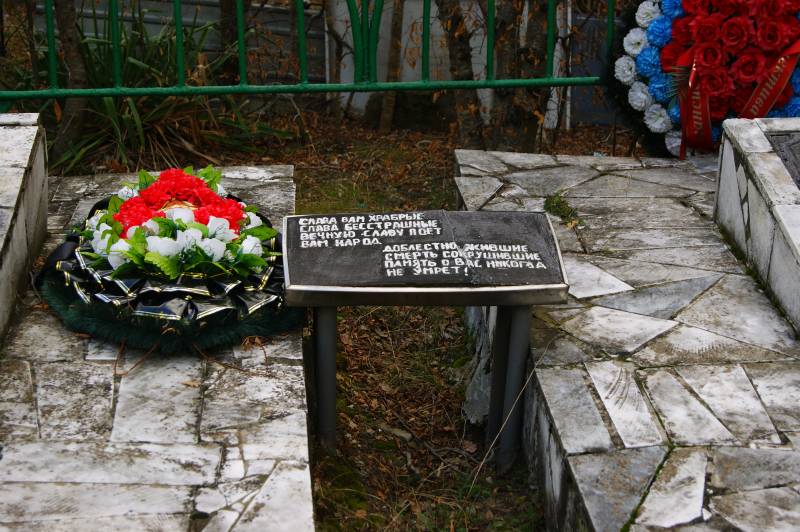 Now these obelisks are surrounded by thickets of oak, juniper, dogrose, dogwood and hold-tree. The roar of the track to this place barely flies. The air is fresh and clean, sometimes you can discern the pacifying sound of the surf, which dissolves in the lush vegetation. It says nothing about the scale of the most brutal battles of World War II. 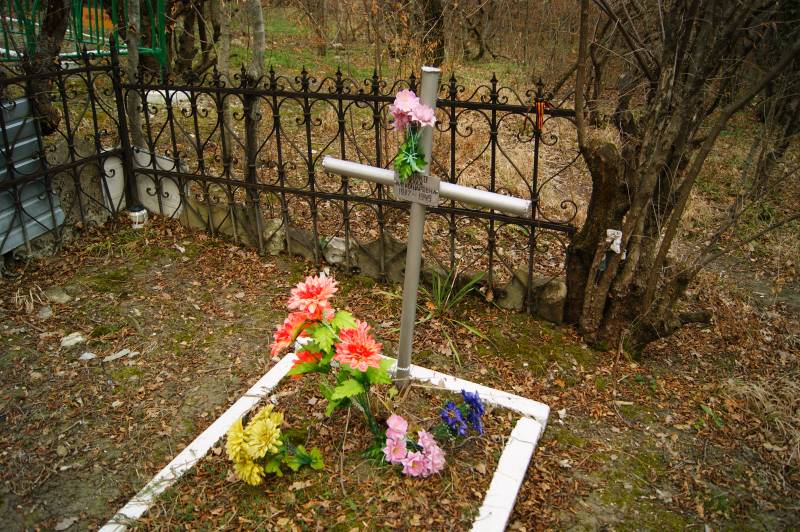 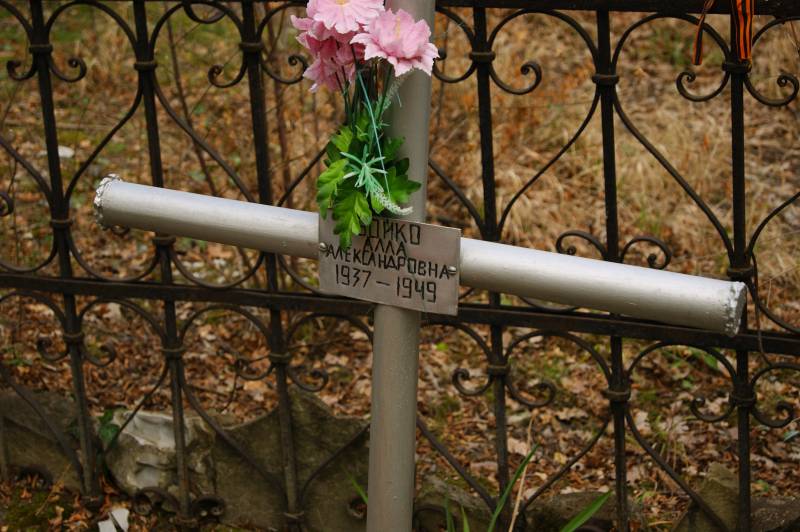 The names of not only Zubkov’s gunners, but also the names of anti-aircraft gunners on the 2 battery of the 30 division of the Sevastopol division, are engraved behind the metal fence of green color on the obelisks. For the "battery" cemetery is the grave of Alla Nikolaevna Boyko. Judging by the years, she was just a girl, death overtook her in 1949. Why the grave is here, I do not know. However, this is another confirmation that Peny is still a cemetery and was used in this capacity for a long time. Indeed, through this place were columns of the wounded and refugees from 1942 year. On the nearby highway, tragedies were played out by those who did not have time to deliver to Gelendzhik Hospital, and those who were caught firing right on the highway. 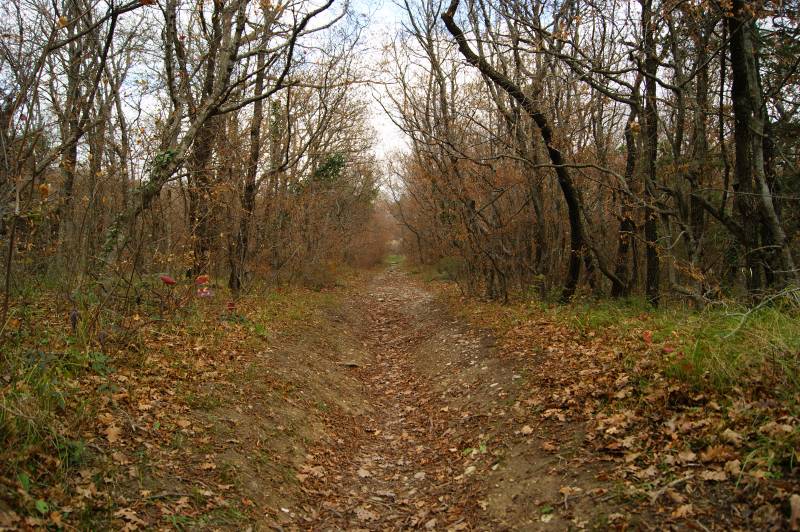 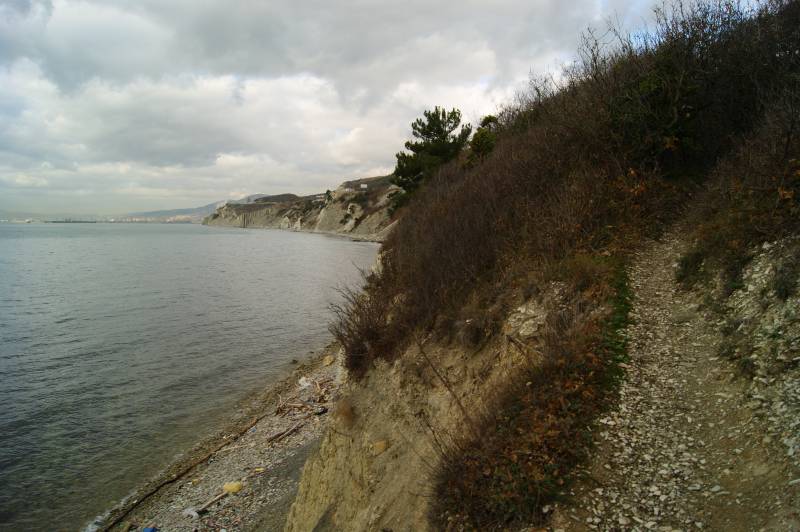 If you go further along the path, you will go down to the sea. Just as Zubkov himself did in 42 and 43. Unfortunately, Cape Penny is too tempting place for the near man in the street. There are parking places lovers kebab and booze. Considering that here, as you can’t stand the obelisks, the cemetery, it was unpleasant to look at this picture.

However, Penaysky cape hides from prying eyes not only the mass grave of artillerymen and anti-aircraft gunners. It is worth returning to the Don highway and passing 350 meters towards Kabardinka, as you meet a small asphalt road, which turns right to the sea. If you collapse, then literally in a couple of meters you will stumble upon a unique, despite its small size, monument. This is a monument to the seamen-hydrographers who died in the battles for Novorossiysk. Not so often will you hear the mention of these modest laborers of our Navy, even though the hydrographic service 13 of October of this year turned 190 years since its foundation. 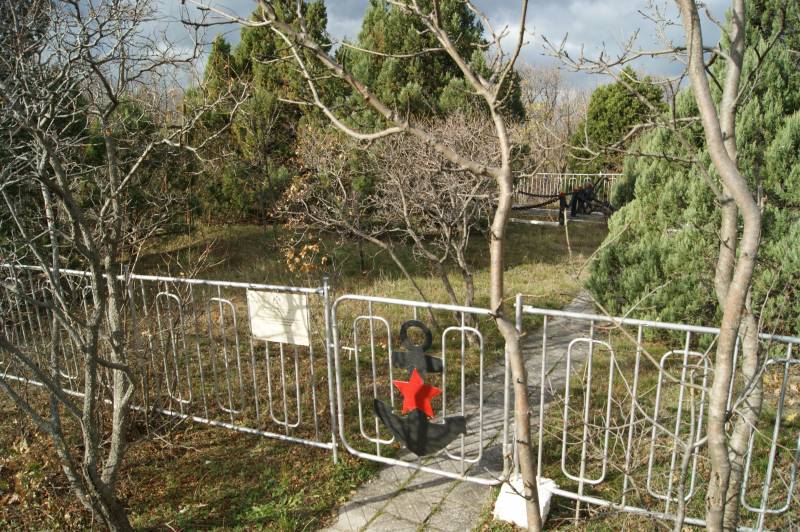 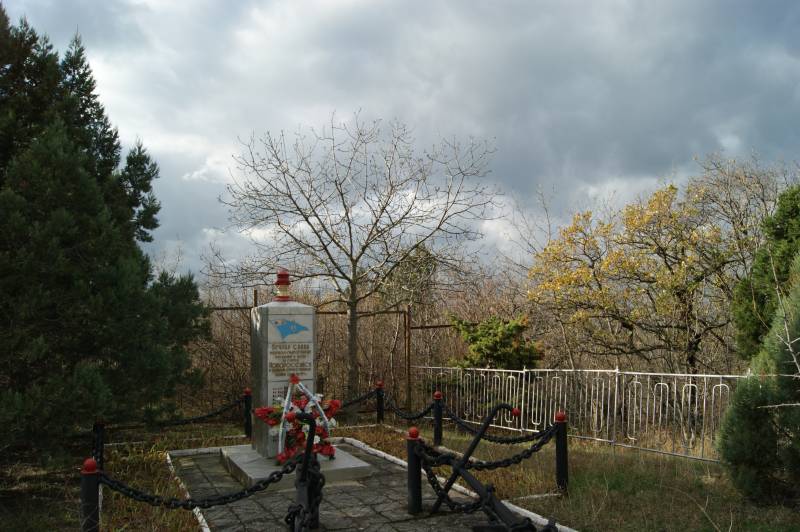 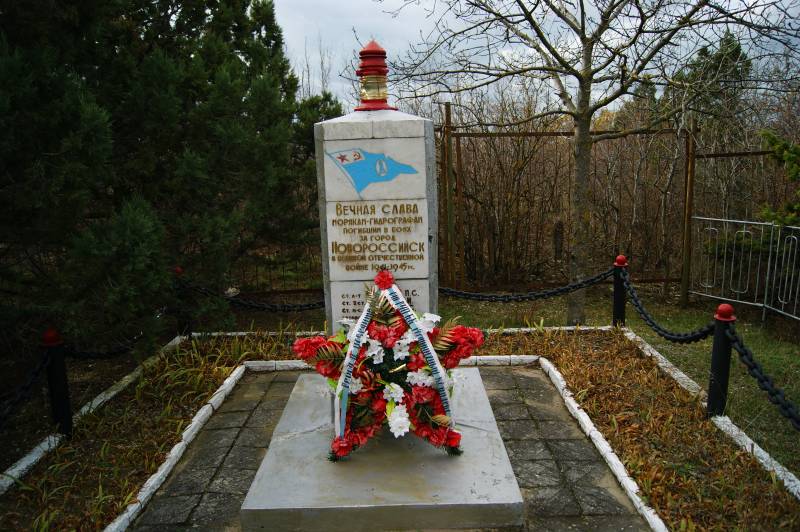 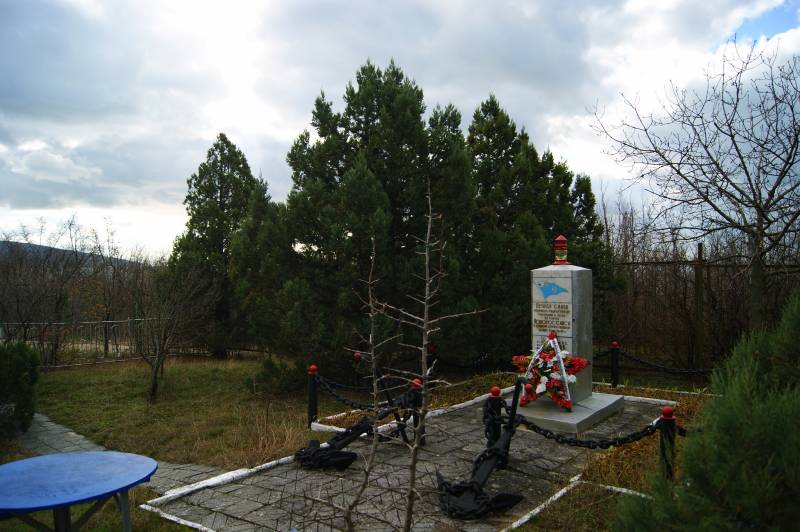 The monument is made elegantly and in an original way - a ship lantern is installed on a small stela, which fortunately the silly public has not yet broken. On the outside of the stele there is a flag of the USSR Navy hydrographic service, and the names of the dead sailors are engraved just below (I did not remove the wreath and only carefully rewrote the names of the fallen):

Here, despite the closer neighborhood of the federal highway, it is also calm, and lush vegetation speaks of peace, envelops you with peace, life itself. After all, it was for the continuation of life and for the world itself that our fighters of World War II fought.