November 29 2017
23
Russian Armed Forces of the Russian Federation ensure the advancement of the Syrian army in Hama, dozens of terrorists are eliminated in Deir ez-Zor, reports FAN with reference to Syrian sources. 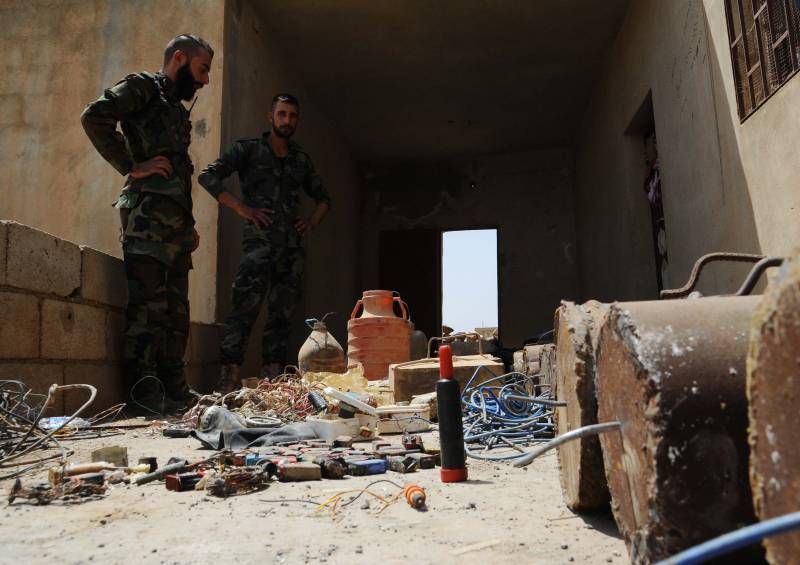 During the day, the Syrian Arab Army (CAA) fired on fortifications of radical groups based in the Eastern Guta oasis, using heavy artillery. Attacks were made on militant deployment zones in the areas of Arbin, Duma, Misrab, Harasta and Madir settlements. Syrian air forces attacked militant positions near Beit Jeanne farms.

The Russian Aerospace Forces jointly with the Syrian Air Force attacked the “Dzhebhat an-Nusra” terrorists (the group was banned in the Russian Federation) near the settlements of Ramla and Rasm Sayal in the south of Aleppo province. Also, soldiers of the SAR army neutralized several militants of radical groups as a result of a clash in the Jabal al-Hoss area. In addition, Azizia and Abisa settlements in the southwestern part of the region came under the control of the CAA. In the north of the region, Syrian air forces attacked the fortifications of the radicals in the vicinity of the settlement of Kafr Hamra.

The Syrian army, with the support of allies, established control over the settlements of Al-Ashar and Al-Quriya in the suburbs of Deir ez-Zora. During the fighting, government forces destroyed dozens of terrorists of the IG group (banned in the Russian Federation). The cleansing of al-Quria and al-Ashara brought the complete liberation from the Islamists of the west coast of the Euphrates River. In total, the SAR army managed to dislodge the IS from seven settlements on the territory between Abu Kemal and Meyadin. In addition, as a result of clashes, government forces repelled terrorists 15 tanks, several dozen mortars and two heavy artillery pieces.

In the north-east of the province of Hama, clashes between the Syrian Arab Army (CAA) and "al-Nusroy" were observed. As a result of the fighting, the SAR army, with the support of the VKS, managed to take control of several settlements in the vicinity of the village of Mustariha, recently liberated from terrorists. Thus, the brigade of the Syrian army came close to the border with the province of Idlib.

Russian aviation inflicted blows on the areas of deployment of IS terrorists in the east of the province of Hama. Airstrikes caused significant damage to IS facilities, as a result of which the Islamists retreated from the area of ​​the settlements of Kbebat and Um Hariz. These settlements and their surroundings are under the control of pro-government forces. In addition, thanks to the support of Russian pilots, the soldiers of the SAR army were able to knock out terrorists from the heights of Tel Hazam.

Ctrl Enter
Noticed oshЫbku Highlight text and press. Ctrl + Enter
We are
Situation in SyriaSituation in Syria
23 comments
Information
Dear reader, to leave comments on the publication, you must to register.