Launch of Korean rocket as a model of offensive foreign policy

November 29 2017
29
So, North Korea again surprised the world by launching its ballistic missile. In principle, no one doubted that the DPRK missile program would continue. Whatever analysts say, any development cannot be considered complete before the actual testing of the object. 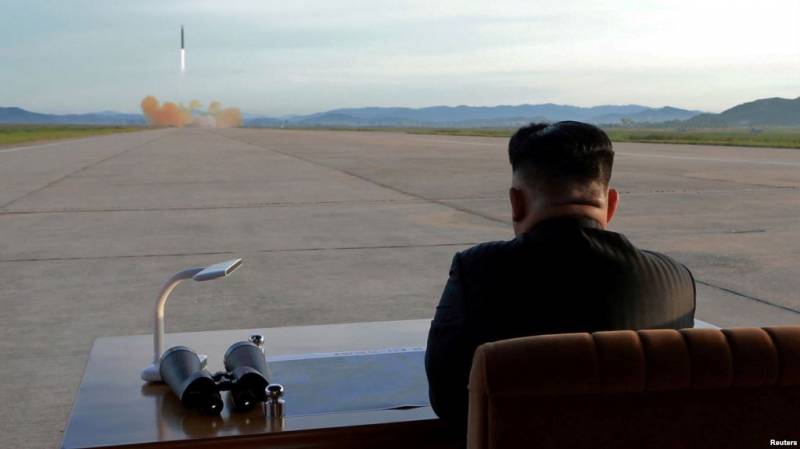 The Koreans this time launched a completely "working" rocket. About 50 minutes in the air. In range and altitude, even Pentagon analysts agreed that the rocket was intercontinental. Almost a thousand kilometers at high altitude is quite serious.

Naturally, I was interested in the reaction of the Americans to the next launch. According to reports leaked to the media, President Trump was reported on the launch even when the rocket was in the air. After calculating the orbit of the rocket and the appearance of confidence in their own safety, the American president declared: "We will take care of this. We will deal with this situation."

It is in the spirit of the Americans. Who would doubt that the United States will cope with a Korean rocket that does not fly toward the United States. With such a rocket, even the Indians from some Barbados will cope. And quite legitimately, the Governor-General of Barbados can declare the power of his own armed forces.

Today is another matter on the agenda. Not even particularly associated with this launch. Among our readers there are few who can not predict the messages of news agencies and leading Western publications. Today we will surely read about the secret help of Russia to the Koreans. On the dark night supplies of food and fuel to the DPRK. Even about accidentally seen on a deaf Siberian railway line train with some products that are very similar to something. And this is exactly what they bring to North Korea.

We have already witnessed a company for inflating the "problem of violating UN sanctions", which was conducted by the Americans a couple of months ago. Then, indeed, several companies were named, including Russian ones, which supply food products, clothing, children's toys and other consumer goods to the DPRK. By the way, this does not violate the sanctions imposed by the UN.

The US press then simply choked on messages "on the Donbass type." Russia and other countries supplying weapons components to Koreans under the guise of humanitarian goods. As always, nothing confirmed chatter Americans. We said it means it's true. The world has become accustomed to this manner.

And now it is necessary to think about why North Korea launched it right now. To think and draw some conclusions already to us.

So, in September of this year, the "whole world" turned against the DPRK. Resolutions, decisions of parliaments, statements of state leaders and so forth, and so forth. But there was this, and another, silenced link of reasoning today. Namely: the problem of the DPRK should be solved. It is necessary to ensure the safety of this country. It is necessary to ensure the security of the region as a whole.

It was? It was! And what has been done in this direction during these two months? Nothing at all. Moreover, the immediate neighbors of the DPRK began to strengthen their armed forces. Decisions on the supply of weapons to South Korea and Japan. I think in Japan today, if you search well, you can also find American nuclear bombs.

Simply put, the US is trying to play with the DPRK in the same way that it is playing with Russia. Delaying the real negotiations. "Creeping offensive". Frank lie in international organizations. Everything is known.

Only with the DPRK it does not work. As the next rocket launch showed, Pyongyang perfectly sees the development of events. And the prospects for this development. In the case of a unilateral implementation of the UN resolution, the DPRK can be completely blocked in a very short time. And lost time can be a decisive factor in the "quiet victory" of the Americans and their allies over the country.

As it seems to me, the next launch of rockets is nothing but a demonstration of this particular position. You, the United Nations and the United States, talked a lot about peace in the region and respect for the right of the people of Korea to their own country. You talked about the desire for peace in the region. You suggested not to build modern missiles and not to develop a defensive nuclear weapon. But besides this, you promised to take steps in this direction in other countries. You promised to stop saber rattling on Korean borders. You promised to take steps to demilitarize the region. And where is all this?

Given the eastern mentality and Korean patriotism, Pyongyang is not at all afraid of the start of hostilities on the part of the United States and its allies. America may not suffer, but the Allies will receive an answer necessarily. And the answer is bloody. Therefore, Koreans will only fulfill the requirements of international organizations in response to the fulfillment of promises made to them by “probable opponents”. If you want, rocket launching is not only testing. These are warnings and a hint on such a variant of events.

As we see, the DPRK pursues a foreign policy that is completely different from the Russian one. The "talking room" of a young Korean leader is completely on the drum. Said-did. He said and ... he said again, then he said it again and again ... Well, speak. And we will work as before. Exactly until the moment when we fully ensure the fulfillment of the assigned tasks. To fulfill the "second number" and control the fulfillment of promises by others - this is the basis of the policy of North Korea.

Maybe other countries that are coming to the first roles in world politics, start working on the same principle? Maybe enough to talk just for the sake of "talk"? There is a contract - follow. There is evidence that you are violating the contract or will soon leave it - then no offense. There is no court.

This is what I? The US budget has already laid millions on the creation of short-range and medium-range missiles. Does anyone know about this? Or are we waiting for the budget to be adopted and approved? Believe, accept and approve! What then? Where are the statements of the Russian Foreign Ministry about the possibility of resuming such work in Russia in this case? Where are our politicians? Or are we already together "gone to the electorate"? Elections on the nose?

Ctrl Enter
Noticed oshЫbku Highlight text and press. Ctrl + Enter
We are
Situational analysis of the death of the MH17 flight (Malaysian Boeing 777), made on the basis of engineering analysis from 15.08.2014Results of the week. “In our cooperative, the board is always agreed”
Military Reviewin Yandex News
Military Reviewin Google News
29 comments
Information
Dear reader, to leave comments on the publication, you must to register.