November 29 2017
440
What can be said about the next drain of the heap of satellites who knows where? All is natural. The ideology of Mr. Prime Minister Medvedev in action in full. 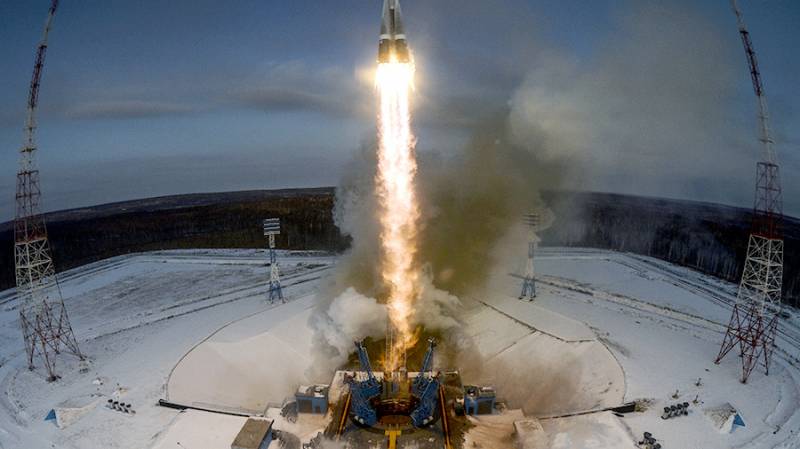 When I learned that the next rocket had ditched with the next portion of satellites, thank God, the "partner" in general, there was not even regret. Only understanding in the spirit of "what did we want?"

Of course, we would like the satellites to be where they are planned. In orbit. Everything else - whether the human factor, technical faults (which is basically the same thing), is no longer important. It is important that we get another slap in the face.

If Frigate were a new product that was not fully tested, it would not be so disgusting. But alas, this is a very beautiful product. From 2000 to the present, more than a hundred vehicles were launched into orbits by the Frigate. Of the 58 starts, only one was unsuccessful due to the fault of the “Frigate”. In August 2014, due to an error in the task program.

Apparently, after the shaking up of VMZ and KBKHA, it was the turn of the Lavochkin NPO.

It is clear that the investigation will be, and someone is appointed guilty. I don’t know whether the storekeeper or the cleaning lady will be appointed. The point is not that.

The bottom line is that we continue to lose ground in space exploration, and by leaps and bounds.

The question arises: who will eliminate the nightmare that has developed in the space industry today?

I did not mention Dmitry Medvedev for nothing. And quote him too, with intent.

His phrase, which he said to the teachers last year, and which made a fuss, absolutely rightly can be attributed to the workers of space plants.

“I am often asked about teachers and lecturers. This is a vocation, and if you want to earn money, there are lots of beautiful places where you can do it faster and better. The same business. ”

The engineer of the space industry is, it turns out, also a vocation. Because the money that they pay for work there is quite comparable with the income of the teacher. Well, a little more.

So, you want to be a rogue for the glory of the Fatherland - go ahead. Everything will be for you: responsibility, understanding that you are doing a very necessary thing for the country (and, importantly, profitable). Here are just no money. This is the calling ...

And you want to live like a man, a car there, an apartment - go into business.

So go. I want to live now, not in the next life. And in the end there are only those who have nothing to catch in business. Either the fanatics of their business, God grant them health.

How many more years the rockets will fall due to the fact that they are collected by unqualified personnel, staffed on the principle “there must be only one”, I don’t know. But I am sure that is not very long. Sooner or later, but the moment will come when there will simply be no one to collect the missiles.

Soviet cadres live their days. And they are being replaced by, alas, not engineers, but defective managers. Claiming for high salaries, but nothing but noise, not producing.

And this, I stress, the policy of the state.

Let me recall the words of the former Minister of Education, and now Assistant President Fursenko, that “the lack of the Soviet education system was an attempt to form a creator-man, and now the task is to nurture a qualified consumer who can skillfully use the results of the creativity of others.”

It is interesting in practice, it turns out: the creators are not needed, and if they are, they should be simply killed financially. Let, you know, go to consumers. Enjoy the results of the creativity of others.

Yes, of course, they will. Why study for five years to receive less per month than Mr. Medvedev per day? The engineer in the KBXA already mentioned costs from 16 to 25 thousand per month. On the site, however, the "prices" were removed, put "contractual", so as not to disgrace. NPO Lavochkina is the same song, but the turner costs 35 thousands there. More, of course, but this is Khimki, not Voronezh. There is a difference. In Voronezh, turner costs a little less - from 30 thousand.

There is also a plant of VMZ, where engines are assembled for "Unions". Fitter for the assembly of these engines, 6 discharge - 20 thousands. Responsibilities: assembly, adjustment, testing in accordance with the requirements of the design documentation of particularly complex and demanding operations for the assembly of liquid rocket engines.

Looking at how the sales manager at Svyaznoy gets from 30. The driver is from 40. Night driver-slugovoz - 80-100. For example, he took from the local newspaper.

But there are those who do not want to carry. There is still. Who wants to collect, test and launch rockets.

And not necessarily cosmic. Speaking of rocket engines, I’m afraid to even think about how they will behave, if anything, Yarsy, Topol and others. Engines at the same factories are collected, with the same hands and for the same salary, if that.

They say there is no money to increase. The crisis in the country has just ended.

I don’t like to get into someone else’s pocket, but I wonder where our gentlemen’s ministers get their income from? Those who have no money for anything. Open data for 2016 year.

Minister for the North Caucasus Lev Kuznetsov. According to the declaration, his income amounted to 582 million rubles. In 2015, his salary was significantly lower - 47,9 million rubles.

Indeed, the crisis has passed, since the income in 12 times skipped. One and a half million a day is serious.

Plenipotentiary of the President of Russia in the Far East Yury Trutnev. 357 million rubles. Two times more than in 2015.

And these people put all of us with a minimum salary of 5 thousand and a living wage of 10 thousand rubles ...

Maybe Mr. Prime Minister should look in his pockets of subordinates for decent salaries to engineers and mechanics of Roscosmos?

A silly statement, of course. No one will not look for anything, the Russians do not abandon theirs. Especially up there.

So, the rocket will fall further. The fault of storekeepers and barmaid.

By the way, about stories with the storekeeper who went to the hospital, because of what that “Proton” collapsed ... It never occurred to anyone, how did the solder turn out to be, to put it mildly, completely wrong? Who ordered it, who paid, who delivered it? Who gave the instruction to "solder, what was given?"

Mr. Medvedev, do you really care so much about what is going on at Roscosmos?

Ctrl Enter
Noticed oshЫbku Highlight text and press. Ctrl + Enter
We are
Results of the week. "Either true or all is well"Results of the week. "Well, do not change me because of every idiot!"
440 comments
Information
Dear reader, to leave comments on the publication, you must to register.