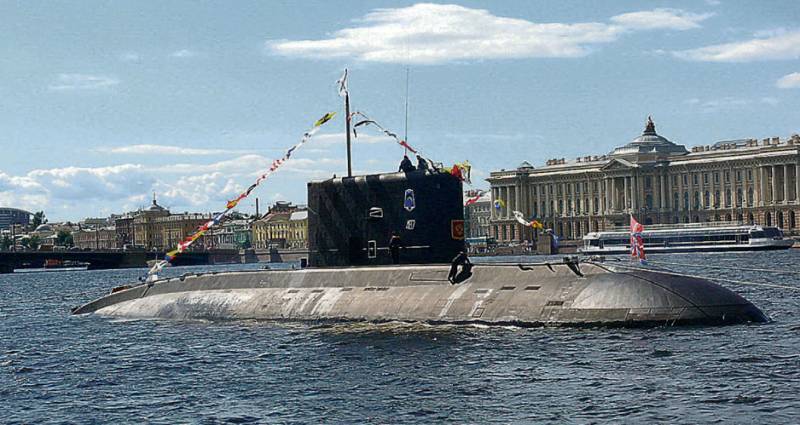 The effective use of Russian naval technology in Syria seems to have created all the prerequisites for the successful promotion of some of its samples on the world market. Including diesel-electric submarines of the 636 project in various export versions.

Almost all of our new “Varshavyanka” from the Black Sea fleet clearly demonstrated their combat effectiveness, successfully firing from an underwater position in the Mediterranean at ground targets in Syria with Caliber-PL cruise missiles. Single and volley strikes at a distance of up to 1500 kilometers were delivered by these diesel-electric submarines both independently and as part of task forces including frigates of project 11356. Any of the potential customers of Russian diesel-electric submarines could be convinced of their high combat potential, although these boats are not exported “Caliber”, and with its export counterpart “Club-S”, the range of which in accordance with the Rocket Technology Control Regime (MTCR) cannot exceed 300 kilometers.

However, the real situation in the global market for diesel-electric submarines and non-nuclear submarines (NNS) with air-independent power plants (VNEU) can hardly be called favorable for domestic shipbuilding. This applies even to such a seemingly developed niche as the Asia-Pacific Region (APR). Although, as various responsible leaders in the Russian military-technical cooperation system often emphasize, the reserve for export diesel-electric submarines to the countries of the Asia-Pacific region, created earlier, gives the country good prospects for further promotion of this type of naval equipment. But most likely their memories are warmed by memories of past years, when the market situation in the region looked more optimistic for us.

Indeed, domestic submarines of 877ECM and 636 projects were supplied to the APR (India - 10 units 877ECM, China - 12 units: four units 877EKM and eight units 636, Vietnam - six units 636.1). It was not possible, however, in the last decade to promote our products in the Republic of Korea, which chose the German diesel-electric submarines of the 214 project and is building a series of nine under license, and in Malaysia, which acquired two French submarines "Scorpins". At the same time, Thailand bought one Chinese S26T and issued an option for two more, and Pakistan is going to build under license eight boats of the 041 Yuan project.

If we evaluate the future prospects of exporting Russian submarines to the Asia-Pacific region, our far-reaching India’s strategic choice was six French Scorpins, currently being built under a DCNS license (renamed Naval Group) at the Mazagon Doyard Limited shipyard, with our far-reaching consequences. (Mazagaon Dockyard Limited, MDL). Moreover, the planned visit of President Emmanuel Macron to India at the beginning of 2018 year may lead to an extension of the contract. 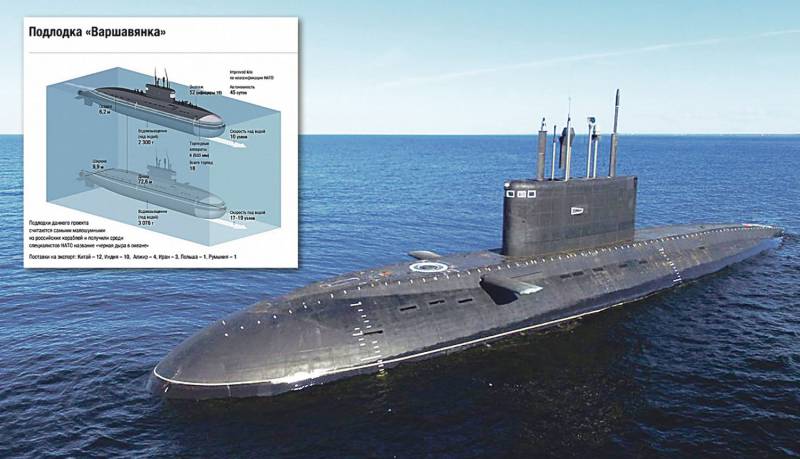 According to preliminary information, Macron will meet with Prime Minister Narendra Modi and other officials, including Defense Minister Nirmala Sitharaman. According to high-ranking French officials, the negotiations are likely to include the sale of two additional squadrons from the Rafale 36 fighter jets and three more Skorpen-type naval structures, since the command of the Indian Navy is extremely interested in increasing the number of DEPL units numbering 13 units (nine boats 877EKM and four - the German project 209 / 1500 company HDW). A preliminary discussion of the sale of three additional “Scorpions” was already held by French Defense Minister Florence Parley during her two-day visit to India, which ended on October 28.

It would seem that there is nothing special behind the combination of numbers 6 + 3. But in fact, they have a big question related to the long-debated Project 75I program worth 500 billion Indian rupees (7,8 billion dollars), involving the construction of six new submarines with a VNEU joint venture with a selected foreign manufacturer. Rosoboronexport, JSC with the Rubin Central Design Bureau and the Amur-1650 naval submarine project equipped with a VNEU was planned to take part in the competition. Our proposal looked like a trump card in the future, because in cooperation with Bramos Aerospace, a new boat for India could be equipped with vertically launching BrahMos supersonic missiles capable of hitting both surface and ground targets. However, it may well be that the French troika will beat the Russian ace.

The fact is that the Indian Navy agrees in principle with the prospect of continuing the licensed production of the Scorpenes and the construction of three more French naval submarines with a VNEU and an attack missile system to destroy ground targets after the Indian Mazagon has delivered the sixth final boat under the current contract for 2021 – 2022 years. According to the naval command, the implementation of the Project 75I program can take at least a decade, if not longer. In particular, only at the end of October of this year, which indicates a ten-year delay, the participants of the planned tender for P-75I received answers to the request of the Ministry of Defense of India for information (RFI). The estimated delivery date of the first submarine to the fleet on this project is called within 2030 – 2033, but, as often happens with the implementation of Indian military programs, the time limit is likely to be extended. And apparently, the Indian Navy today is not as interested in P-75I as it was a few years ago, since over the years, a rather influential French lobby has formed in its command. 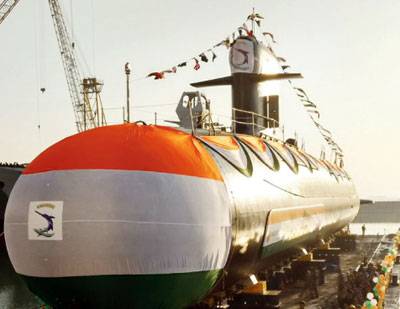 Indeed, who would like the shipyard to lose the competencies that MDL currently receives, as was the case in HDN's 90-s with the German submarines of the HDN project of 209 / 1500. According to the command of the Indian Navy, it is quite reasonable to build three more Scorpins before the time when the final decision on the P-75I is ripe.
The Indian Navy called the lost decade in the construction of submarines the period that came when the Shankul diesel submarine, the second German submarine of the 209 / 1500 type, was assembled at the MDL shipyard under license and was commissioned in 1994. After that, the company HDW was embroiled in a corruption scandal, and the potential order for licensed construction of two additional diesel-electric submarines was canceled. Thus, during the long 11 years before the launch of the 2005 Project in 75, namely, the construction of six French Scorpions is underway today, the production capacity of MDL for submarines remained idle, after which they were restored for big money.

“There should be no gap between the end of the Project 75 and the start of the P-75I program,” said the former head of the MDL shipyard, rear admiral R. K. Sherawat. He reasonably believes that the creation of a line for the construction of submarines is a difficult, time-consuming and expensive business, because the one that already exists should not be eliminated in the future.

In October 2015, the former Minister of Defense of India, Manohar Parrikar, announced that his department would not allow the shipyard to lose its experience in licensed construction of French submarines. He then noted that subsequent orders for a larger number of boats are under consideration, and added: these additional units with the VNEU will be improved in accordance with the operational needs of the Navy.

There is another technical detail that in the future can play into the hands of the French in the event that the tender for the 75I program is still announced: the streamlined production line of Skorpenov at the shipyard MDL cannot be used for licensed construction of boats of other projects. But Paris also has an additional trump card - a commercially available MESMA-type VNEU. This power plant as a separate autonomous module is not only installed on new boats during construction, but also crashes into the hull of any modernized submarine. The presence of such a VNEU gives the French a good modernization potential that can be in demand in the near future in the Indian market.

Air independent is needed as air

As for Russia, according to the statement of the head of the Naval Shipbuilding Directorate, Rear Admiral Vladimir Tryapichnikov, the fleet expects to receive a ready-made VNEU for naval submarines only in 2021 – 2022. But even if it is created in time, it will be necessary to conduct trial operation, eliminate the comments and adopt. Only after that the product receives an export passport and is offered to the foreign market.

According to the executive director of the Krylov State Scientific Center, Mikhail Zagorodnikov, the absence of a VNEU on Russian submarines may in the future make them unclaimed on the world market of naval equipment. “Diesel fuel-submarines with VNEU are produced by France, Germany, China, Republic of Korea. India starts its boats with the French to do. We will lose this market if we do not create a VNEU, ”Zagorodnikov believes.

By the way, China is hardly worth considering as a buyer of Russian submarines. Our strategic partner not only gained a good operating experience with the 12 Russian diesel-electric submarines of the 877EKM and 636 projects, but also began to develop boats of this type. Moreover, as noted above, turned from an importer of submarines into their exporter. With the advent of the new player, competition in the global diesel-electric submarine market between Russia, Germany, France and the Netherlands has intensified. The total number of submarines produced by the Chinese shipbuilding industry in 20 years (1995 – 2016) was 44 units, which corresponds to the average annual launch of two boats. Such rates can satisfy the needs of the PLA Navy and ensure the implementation of export contracts.

In addition to the increased international competition, it is necessary to take into account that the current state defense order for the construction of a series of six Varshavyanok for the Pacific Fleet and several boats of the 677 project will be fulfilled in the coming years, and will subsequently decrease from 2020. In the future, there may be a problem with the capacity utilization of the Admiralty Shipyards JSC, where the production of diesel-electric submarines is well-adjusted both for the Russian fleet and for export. And it needs to be addressed today.

Ctrl Enter
Noticed oshЫbku Highlight text and press. Ctrl + Enter
We are
5-I operational. Interview of Admiral Retired Selivanova Valentin EgorovichSediment from "Varshavyanka"
13 comments
Information
Dear reader, to leave comments on the publication, you must to register.