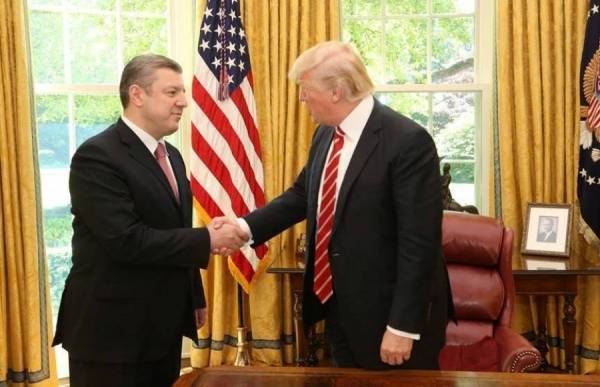 It began about two years ago and continues to gain momentum as Washington allocates more and more resources to counteract anti-Western and anti-liberal rhetoric in the post-Soviet space.

The US Embassy in Tbilisi has just awarded the largest grant to fight disinformation to date on a project worth 250 thousand US dollars to work with Georgian officials to improve “the nature of official statements”.

Georgia has strengthened its ties with the European Union, including the conclusion of a free trade agreement and the introduction of a visa-free regime, to which conservative elements in Georgia, including populist political groups and the media, have reacted negatively. They argue that ties with Europe damage the economy of Georgia and its traditional cultural values. They also portray the West as an unreliable friend and say that Russia's leadership is ultimately an inevitable reality.

Western politicians believe that the birth of such theses poses a geopolitical threat to Washington and Brussels.

“It begins to contradict our broader interests when people are trying to force them to abandon their aspirations to become a Western, rather than a Eurasian country, and it is at this moment that we must help,” said a senior US official, subject to anonymity.

U.S.-supported activities cover a wide range of strategies. The United States is funding two fact-checking websites: mythdetector.ge (“Mythbusters”) and factcheck.ge (“fact-checking”), which accuse Georgian media of anti-Western misinformation and try to discredit it. The United States Agency for International Development (USAID) is funding a column within the weekly television news a program called Strength in Europe, in which four prominent social intellectuals discuss myths about relations between Georgia and the European Union. USAID even funded the creation of a number of book clubs across the country, whose members read and discuss journalist Peter Pomerantsev’s memoirs about working on Russian television, “Everything Is False, Everything Is Possible.”

The effectiveness of these measures is already noticeable, according to Nodar Tangiashvili, an employee of the East-West Management Institute, which implements many programs to counteract disinformation. “A year ago nobody spoke about propaganda in Georgia. Now everyone is talking about it, ”he said, pointing to a recent poll by the National Democratic Institute, which shows that 47 percent of Georgians believe that Russia is spreading propaganda in the country.

“We managed to make this topic discussed in the media,” Tangiashvili added.

The new grant, which was received by the Georgian Center for Security and Development, will allow the Government of Georgia to coordinate the exchange of messages between the ministries of defense, foreign affairs, and on issues of European integration and the office of the Prime Minister.

“One of the problems is that so far there is no settled order of strategic communication,” said a US official. According to him, strategic decisions should be made in the office of the Prime Minister, but so far this has not happened. "The situation is gradually improving, but still a lot of work."

“The main idea of ​​Russian propaganda in Georgia is that the EU and NATO are unattainable goals. And it all comes down to this, ”said Tornike Nozadze, head of the department of strategic communications at the Ministry of European Integration.

“This is all a lie. Russia has never been our friend, Nozadze said. He holds regular meetings with other government officials and the public to discuss Russian disinformation and what the response of the government should be. “I start my meetings from the very first question:“ Can someone in this room give me an example of what Russia has done for Georgia, and Georgia has become better from this. Just one example. ” And people are shocked by this issue, because there are no such examples. ”

The pro-Western campaign pays a lot of attention to rural areas, where people are considered particularly vulnerable to anti-Western messages. Compared to busy Tbilisi, rural areas are not so developed economically and do not see much benefit from Western integration. In addition, many ethnic minorities, especially Armenians and Azerbaijanis, as a rule, do not speak Georgian and, therefore, watch Russian television more. “In Tbilisi, resistance (to anti-Western messages) is very strong, but if you go to the regions, everything will be different,” said the director of the Georgian Policy Institute, Cornele Kakachya.

“We have done a lot of work with the Armenian community, which least of all supports joining NATO, and I think this is directly related to the fact that they are watching Russian television,” said an American official. Neighboring Armenia is also Russia's most important ally in the Caucasus.

Leading radio stations “Strength in Europe” regularly visit small cities across Georgia to meet people outside the capital. Special attention is paid to the media and officials. Paata Gaprindashvili, director of Georgia Reform Associates, which owns the resource factcheck.ge, notes that regional officials are very offended when facts from their statements are verified. “They take it personally,” he said.

In the meantime, a US-sponsored fact-finding test is engaged in debunking both very obvious disinformation, for example, EU rules that do not exist, and more controversial issues.

In one of the recent “Mythbusters” records, the fact that “in 1801, Georgia joined Russia voluntarily,” was called a myth. According to the record, Russia simply “annexed” Georgia. However, historians believe that the traditional version is closer to reality. Ronald Grigor Souni notes in his “Formation of the Georgian Nation” that the last East Georgian king, because of the risk of absorption by Persia, “had no choice but to try to renew the Russian protectorate ... [and] hotly asked his country was incorporated into the Russian Empire. "

Fact-checking companies are also exploring one of the most painful periods in relations between Georgia and the West, when the United States and Europe failed to protect Georgia during the 2008 war of the year with Russia. At that time, the Georgians complained about this “betrayal”, but recently there was talk of the arrival of American humanitarian aid, which helped stop the Russian invasion.

“I do not believe that propaganda must be fought with counter propaganda. We need to fight it with the help of the truth, ”said Kakachya. “The US intervention will not be a blessing for us.” People say that in the 25 years since the end of the Cold War, Russia has not changed. But people also know that the United States also has established traditions of propaganda. ”

“Western governments are fighting hard because anti-Western disinformation is very effective among conservative Georgians,” said Nino Danelia, a professor of media research at Tbilisi State University Elijah. "The Russian information is closer to the Georgians."

Similarly, pro-Western information, even if it is not funded from abroad, seems to be propaganda for many people. “If something corresponds to your beliefs, it’s very easy to believe, and vice versa.” Believing that the West will never be able to protect Georgia from Russian influence or aggression will be particularly difficult to oust. “The problem is that this is true,” said Nino Danelia.

She also noted that the United States is too passionate about liberal values, especially human rights, and forget about social and economic rights that are very important for rural residents of Georgia. “For example, they say:“ Why do you talk so much about gay rights while children are starving? ”We need to talk more about social rights. Until now, we have focused more on liberal values. But now it needs to be changed. ”

The pro-Western campaigners admit that there is still no evidence that Russia is to blame for the anti-Western sentiment in Georgia, but that in the future it can do it. "I am sure that Russian money is involved in this, but I have no evidence," said a US official.

“All this is just guesses, no incontestability,” Tangiashvili of the East-West Institute of Management added. Tangiashvili said that one of the future directions of anti-Russian rhetoric should include the support of quality journalism, which could reveal these links. “We need more journalistic investigations, more evidence,” he said.

Ctrl Enter
Noticed oshЫbku Highlight text and press. Ctrl + Enter
We are
What you didn't want to know about EnglandNikolay Silaev, Andrei Sushentsov: Georgia after the elections and prospects for Russian-Georgian relations
Military Reviewin Yandex News
Military Reviewin Google News
11 comments
Information
Dear reader, to leave comments on the publication, you must sign in.