Russia will manage to bring Syria to the world. If Americans do not interfere!

November 28 2017
25
The question of building peace in Syria has become for Western analysts something of a fortune telling on the coffee grounds. On the one hand, Russia is recognized as a state that is fighting in Syria against terrorists and actively participates in the peace process, on the other hand, they do not admit that Moscow is really seeking to bring peace to the region. 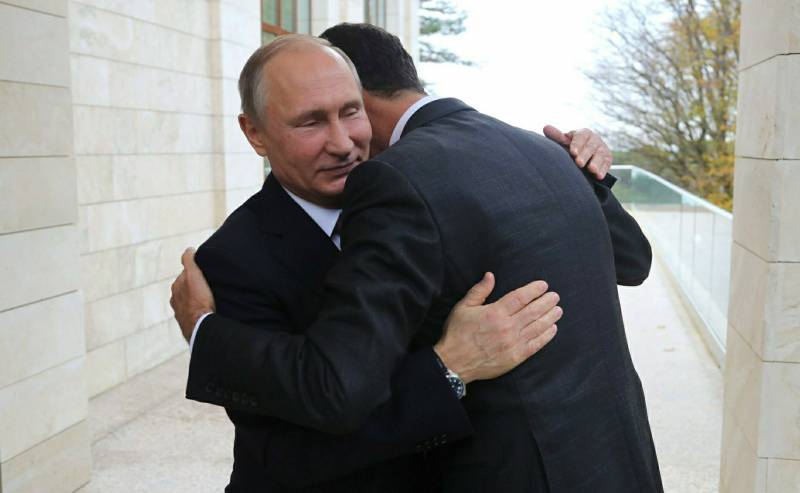 The BBC diplomatic correspondent, Jonathan Marcus, believes that Russia's military and diplomatic successes do not guarantee Syria peace. Yes, Moscow managed to strengthen its position in the world arena, but the Syrian peace settlement may be a difficult task for the Russians, given the clash of interests of regional players, the website’s opinion "InoTV".

Russia's withdrawal from the Syrian crisis has significantly strengthened Moscow’s military and diplomatic reputation, the analyst agrees. Meanwhile, this was achieved against the background of a heated debate on the methods of Russia. According to Jonathan Marcus, Moscow ensured the survival of the Assad regime and at the same time expanded its own military presence in Syria. Russia has become an authoritative regional player. She heads the "fragile alliance" with Iran and Turkey. Three states are building the future of Syria. The Saudis are already "knocking the thresholds" of Moscow - this is what has come to the Middle East!

Success came to Moscow because the Kremlin clearly defined its goals - it saw an opportunity and did not miss it. Russian aviation and special forces became a support for Assad's "decaying army," and Hezbollah and Shiite militia units provided Damascus with infantry. The help of Tehran and Moscow allowed President Assad to defeat both the opposition and the Islamic State (banned in Russia), Marcus recalls.

“Russia has achieved this“ victory ”, if it can be called that, simply by applying a pragmatic policy, especially not caring about what many critics of the country would call“ moral conduct, ”the analyst concludes. According to him, Moscow took the side of the “regime”, which killed its people and committed war crimes. She “came to the defense” of the Syrian government, accused of using chemical weaponssure Marcus. Moreover, the Russian air campaign "used a large number of unguided aerial bombs." True, the United States and its allies, who sought to use high-precision weapons, also killed civilians, the analyst admits.

And here is another advantage of Putin that was appreciated by Russian society: Putin achieved success in Syria with a small contingent that suffered relatively small losses.

But will Moscow, which won the war, succeed in bringing the country to peace? The material of the author expressed doubt about this, because Washington can maintain its leverage in the region, including its influence on the Kurds. Following the Kurdish course, the Americans will be able to limit the victories of both Russia and Iran.

Obviously, we note that the author has nothing to say about the current diplomatic victories of the United States in the region, and therefore the author hopes for future victories. They say that the Kurdish question, which the United States will solve in its own way, will put an obstacle in the path of Russian victories. However, the author “forgets” that such behavior in the international arena leads not just to peace, but to a new war and the redrawing of the borders of existing states. Well, this is the usual behavior of the "hegemon." But then it would not be worthwhile to write about “achieving peace”, which Russia allegedly will not do. It is difficult to achieve peace where the US is fueling war!